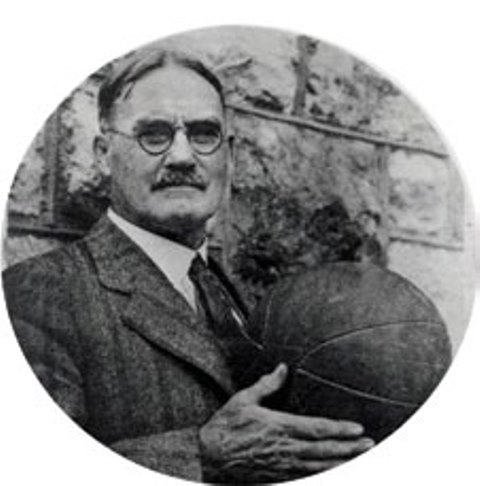 James Naismith via Wikicommons.
“Your sons and your daughters shall prophesy, your old men shall dream dreams, and your young men shall see visions.” Joel 2:28, NRSV
Though the Reverend Dr. James Naismith, inventor of Basket Ball, passed away long before anyone referred to the NCAA Division I Basketball Tournaments as “March Madness,” it seems likely he would have enjoyed our nationwide party of college hoops. Dr. Naismith was not just “a medical doctor, Presbyterian Minister…and owner of a vocabulary without cuss words,” as his friend, the legendary football coach Amos Alonzo Stagg, once wrote.1 He dreamed new things. And what is madness, in March or any month, if not a dream-like vision of the world?
His youth in Almonte, Ontario, Canada, had elements of nightmare. His parents died of typhoid fever when he was nine years old, and his brother succumbed to an abdominal infection when James was a student at Montreal’s McGill University. The memory of those losses, and the religious education he received while studying for the ministry at Montreal's Presbyterian Theological Seminary, shaped his resilient character, as did his outdoor exploits as a lumberjack, rugby player, and football lineman. The Old and New Testament virtues of determination and compassion coexisted in him to an unusual degree. Mr. Stagg—himself a Presbyterian proponent of the “muscular Christianity” movement that encouraged young people to develop in tandem their physical and spiritual selves—said Naismith the lineman could do “the meanest things…in the most gentlemanly manner."

Naismith's 13 Rules of Basket Ball. via Just in the middle

Many credit Naismith with inventing the football helmet while teaching at the International YMCA Training School in Springfield, Massachusetts (now Springfield College). The safety of Basket Ball players was certainly on his mind in 1891 when he set down the 13 rules of his game, invented to promote indoor exercise among students during New England’s coldest months. Rule Number 5 states, “No shouldering, holding, pushing, tripping, or striking in any way the person of an opponent shall be allowed.” Even the method of scoring, arching a soccer ball into a peach basket fixed high on the wall, protected teammates and opponents from errant shots. No dribbling was allowed in those early games, nor flagrant fouls. In the YMCA Training School’s gym, any player who touched another with the “intent to injure” was immediately ejected.

In Springfield, Naismith coached his future wife, Maude E. Sherman. The two moved to Denver, Colorado, in 1895 so Naismith could complete his physician studies at Gross Medical College. Their last home was Lawrence, Kansas, where Naismith became the director of the gymnasium at the University of Kansas in 1898 and soon started the school’s storied men’s basketball program. Though the only Jayhawk coach to retire with a losing record (he often spent more time refereeing games than coaching his teams), the chapel services Naismith led before hundreds of students, and the guest sermons he delivered at the First Presbyterian Church in Lawrence, were hugely successful. When some church members objected to a Sunday School game he invented where students combined Bible and baseball stories, Naismith took his newest creation on the road as a visiting minister, preaching the gospel of sportsmanship at other churches in the Midwest.

Manual of the First Presbyterian Church, Lawrence, Kansas : history of church and roll of members, April 1,... by david_phs

Although Naismith was a ruling elder at the Lawrence congregation, he never served as a pastor. Instead, he contented himself with using basketball as his personal ministry to Presbyterians and peoples of all faiths. Wherever life took him and his greatest invention, he never forgot the importance of spiritual guidance. As Josh Swade writes in The Holy Grail of Hoops: One Fan’s Quest to Buy the Original Rules of Basketball, “[Naismith] claimed that the only reason he was offered a position at the University of Kansas was because he knew how to pray.”

Not coach or win… but pray. Let’s hope the men’s and women’s teams in this year’s tournaments are as brave in loss and as humble in victory as the visionary reverend doctor.