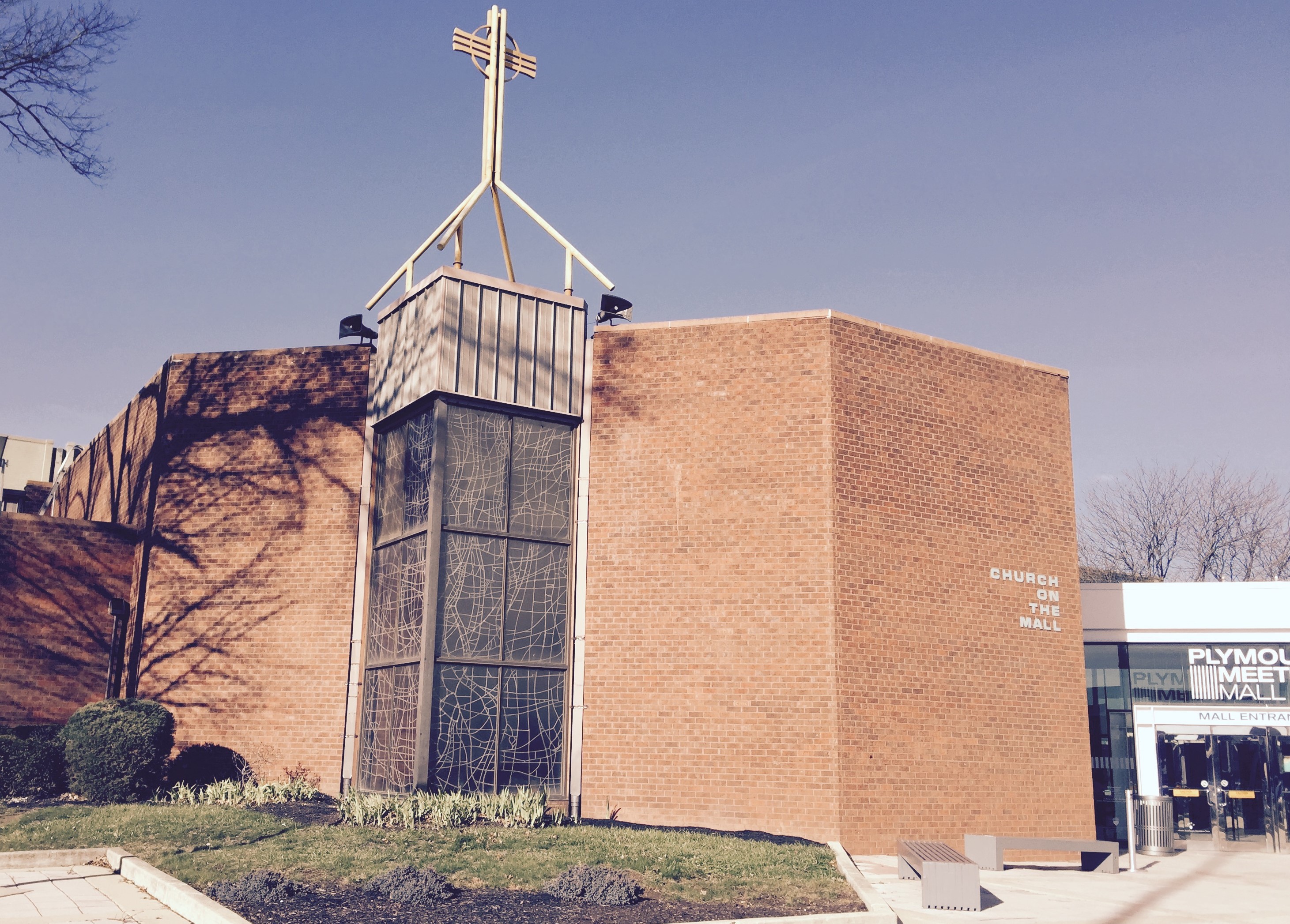 In the 1960’s, the Spirit was busy at work in the lives of three congregations, their members, an adventurous Presbyterian minister, an encouraging Presbytery, and an innovative Mall.  The Conshohocken Presbyterian Church, Holy Redeemer Church in Norristown, and the Ambler Chapel were all facing decline as traditional congregations.  At this same time, a new mall was being built in bustling Plymouth Meeting at the intersection of two major highways.  Rev. Allan Kinloch, Jr. and the Presbytery of Philadelphia took a leap of faith, deciding to merge the three congregations into one, which would be located right in the newly formed Plymouth Meeting Mall.  Church on the Mall was born.

When the Mall opened in 1966 the Church met in various offices and storefronts.  Because of the Blue Laws, the Mall was closed on Sundays.  Worship took place in the grand court, and baptisms were administered in the Mall’s fountain.  In 1972 plans for an actual church building came to fruition and the space which we now know and love as Church on the Mall was created.  The congregation sought to be right in the midst of the marketplace, being a place of hospitality and welcome at the center of civic life.

After Rev. Kinloch’s retirement in 1999, the congregation was led by Pastors Rev. Scott Bohr, Rev. Phil Olsen, and their current pastor, Rev. Sarah Colwill.  As the Mall has taken on new endeavors, so has the Church.  With the closing of one of its anchor stores, Macy’s, and the opening of Legoland, the congregation continues to be a place of hospitality and welcome.  With the help of two Covenant Fund grants, the congregation hosts a monthly, free meal called First Fridays.  This meal seeks to unite all sorts of people and sees a mix of congregation members, friends, and those in need at this dinner.  Piano music and table decorations provide an atmosphere of welcome and peace.

The congregation has also strengthened its mission outreach ties in the neighborhood.  Church on the Mall is a “foundational congregation” for the Norristown Hospitality Center.  They are also connected with the Colonial Neighborhood Council, collecting on-going donations and adopting families in need during the holiday season.  An upstairs office hosts a gluten-free food pantry, The Rachel Way.  Many nights the Church’s doors are open to self-help groups such as Alcoholics Anonymous.  The Church recently celebrated 50 years of mission and ministry in this place, and remains open to the stirring of the Spirit as it continues to guide and lead this group of faithful disciples seeking to share the Good News to all people.