A Missionary Calling: Will God So Honor Me? 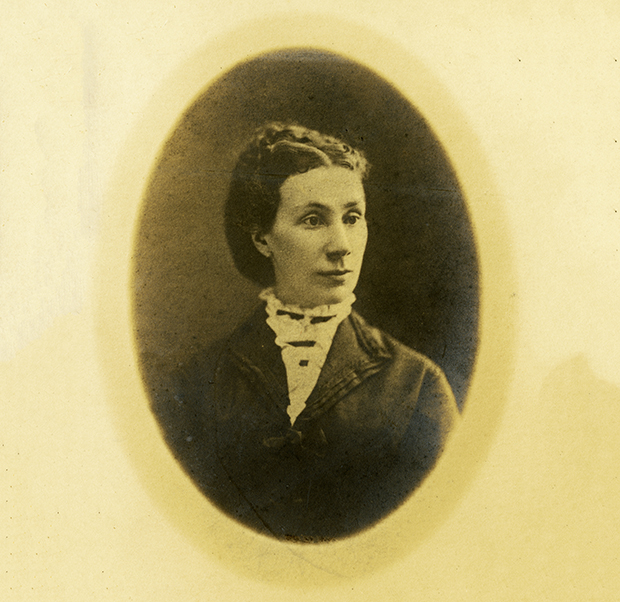 Mary Parke Thompson and her husband David Thompson served as missionaries to Japan for over five decades—from the 1860s into the 1920s. The Presbyterian Historical Society received their personal papers in 2011, a collection that contains a wealth of information about Presbyterian mission work in Japan, including Mary’s seven handwritten diaries. PHS volunteer Sue Althouse, herself a retired missionary to Japan, has been processing the Thompson Papers, and she has chosen excerpts from Mary’s diaries to share with our readers.

Mary Calhoun Parke was born in Ireland in 1841 and immigrated to Ohio as a child. She graduated from Xenia Female Seminary in 1866, and taught school for several years. In 1872, the year she penned these entries, Mary was living at home in Savannah, Ohio. An earnest Christian, she felt that God had some special work for her to do. The hopefulness of her deliberations, and her father’s poignant response to the news of his daughter’s potential departure, make for particularly affecting reading.

March 17: For some little time various circumstances have led me to think that perhaps I should be a missionary. This feeling was very strong as I read this afternoon. I went to my room and knelt down and prayed that God would show me clearly the way I should go, that I may go out with strength and confidence. He going with me. I told him I dedicated myself, my all to him, freely, gladly. I will look for an answer.

April 9, Morning: Troubled dreams in the night. It has been raining—now the bright sun is shining….God is good. My heart is happier. The birds fill the air with song. They say to me, “We come as missionaries. Go you.[”] And I have been thinking and thinking that it is God’s voice saying, Go. I will tell Prof. [Boyd, head of Savannah Academy] I cannot teach for him.

April 9, Even[ing]: I have told Prof. my intention. He spoke very kindly and offered to assist me in procuring an appointment, but wanted to know if I would not teach for them until that time. I told him I wanted to do nothing that would hinder me. My course is uncertain. This telling any one seems to make certain my intentions—what were only silent intentions, wishes before. Thoughts of weakness, of His strength, of joy, triumph, of sadness, sorrow crowd on me. I cannot but weep.

April 10: I have written to Lena asking her to send me an article she has concerning a school for missionaries in New York. I would like to have some such training. I have retired many times to my room to pray a moment: for strength, for faith. Ah! if faith should fail! My friends, my comforts, this pleasant land, are dear to me. I must tell Father soon, when I know anything certainly.

May 8: I have written to Prof. W.H. Jeffers today asking advice and assistance after telling him my intention of being a missionary under the Presbyterian Church. I gave the letter to Father to read after I had written it. He read it more than once, sighed often, then gave it back to me and went out without saying a word. He has been very kind since, and I see sadness mingled with it. I scarcely expected this. I feared he would be offended, though my only object is to be a true and loving child of God and his.

June 10: I have not yet written to the Secretary of the Board of Foreign Missions, though I have thought of it every day—every hour. I have wanted more time than I had so that I could write fully. I can delay no longer. I long to have arrangements made, and to go. I think not now so much of sacrifices and privations; but the questions arise rather, will the Board receive me! Am I worthy? Will God so honor me?

June 22: I have this week written to Sec. [Frank] Ellinwood.

July 6: A letter from Sec. Ellinwood. Speaks kindly. Says they are very favorably impressed, and he has little doubt but that I can go, and to Japan if I prefer it. How glad his words made me! Again and again I thanked God.

Mary Parke was indeed appointed by the Board of Foreign Missions to work in Japan. She spent 2½ months in New York City attending lectures, helping in a social service agency, and visiting some women’s groups interested in missions. Then, with one very brief stop at home in Ohio, she made her way by train to San Francisco to embark for Japan on April 1, 1873.

Next month, look for excerpts from Mary’s journal that describe her first months in Japan, her initial adjustments to missionary work, and her first discussions with Rev. David Thompson, her future husband.