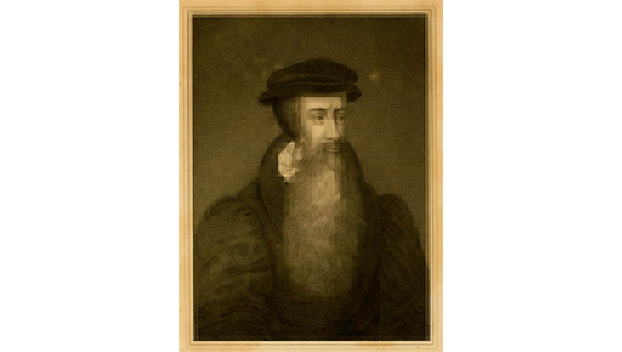 Digital John Knox. Based on an engraving by J. Cochan.

Not all of us are able to tour Scotland to visit John Knox's homeland or spend hours in libraries or archives reading up on his most important works. Fortunately, the great reformer is well-represented on the internet. As we commemorate Knox's 500th birthday in 2014, here are some resources to explore to find out more about his works, life, and ultimate resting place.

Writings by or about John Knox

A selection of books about John Knox in the Internet Archive

Writing by John Knox in the Internet Archive

Books by John Knox in the Gutenberg Project

John Knox 500: by the Presbyterian Mission Agency marking the 500th anniversary of the birth of John Knox. Although John Knox only stayed in this house for a short time before his death in 1572, it was his association with the structure that saved it from demolition in the 1840s.

Today, the John Knox House is the only original medieval building left in Edinburgh.

What is a 'testament testamentar'?
The document drawn up by the Commissary Court of Scotland sometime after a person's death. It included an inventory of the deceased's possessions and often a full copy of the will made by the deceased stating his or her wishes regarding the disposal of the estate. It also confirmed executor(s) he or she had nominated. (If a copy of the will was not included, reference was made to it having been recorded elsewhere, probably in the court's Registers of Deeds).

Often regarded as the mother church of Presbyterianism, St. Giles Cathedral was the scene of many fiery sermons from the great reformation preacher. John Knox's statue can be seen within the church, and his grave lies in the former churchyard (now paved over and used as a parking lot) behind the building.

Comedian Andrew Heaton gives his irreverent take on how John Knox's grave ended up in a parking lot.