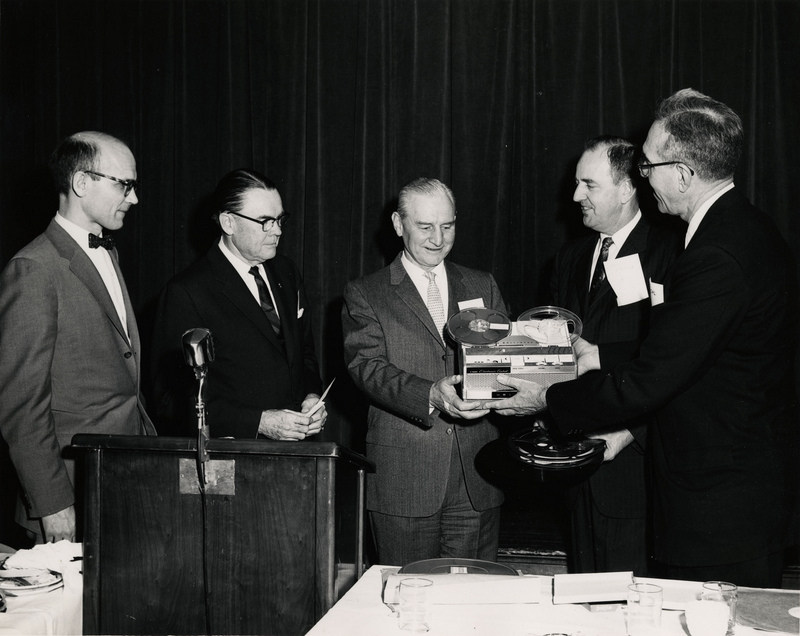 John Redhead receiving a reel to reel player from the Protestant Radio and TV Center, n.d. (Image No: 4439)
During the 1920s, Americans began buying home radios in large numbers. Religious leaders, eager to connect with new audiences, used the new broadcast medium to spread the Gospel.
Rev. S. Parkes Cadman (1864-1936), a Congregational minister in Brooklyn, NY, is widely considered the first radio pastor. Less well known, but no less important to the history of radio, is Rev. Dr. Theodore Savage, a Presbyterian minister who served as moderator during the question-and-answer section of Cadman’s show.
In 1942, Savage chaired the Presbyterian Church in the U.S.A.’s (PCUSA) Committee on Religious Radio, which recommended the establishment of the Department of Radio and Television. The Presbyterian Church in the United States (PCUS) followed suit in 1945 by establishing a Permanent Committee on Radio.
In the collaborative spirit of Cadman and Savage, Presbyterians joined with other Protestant denominations to create additional religious programming. The Protestant Radio Center was chartered in 1949 by nine agencies; including Columbia Theological Seminary, the PCUS, the PCUSA, and the National Council of Churches’ Southeastern office. In 1953, the PRC built the Protestant Radio and Television Center, a production studio, in Atlanta, GA. Using the center’s facilities and personnel, denominations such as the PCUS produced radio and television shows including Sunday School of the Air and Put God First.

Front cover of pamphlet, Alliance for Christian Media, n.d.
The flagship radio program of the Protestant Radio and Television Center was the Protestant Hour. Launched in 1945, the program would grow through the years to have a massive audience; in 1980, 550 domestic stations and 900 Armed Forces Network stations would air the Hour to 15 million listeners each week. Different Protestant denominations, including Presbyterians, Lutherans, and Methodists, received a set amount of air-time each year to produce Protestant Hour shows, which typically lasted a half-hour and began with prayers and hymns. That week’s guest minister would also give a sermon, which usually lasted 15 minutes. Find a sample of the program's opening music immediately below.
The other three sound clips included here are three Protestant Hour sermons from our holdings, the first two hosted by the Rev. John A. Redhead Jr., former minister of the First Presbyterian Church in Greensboro, North Carolina. By one account, Rev. Redhead appeared on the Protestant Hour more than any other minister.
In “God and Golf,” which aired February 14, 1960, Rev. Redhead asks, “Have you ever thought of the several ways that the game of golf throws light upon the truth of God?” Like any sport, he explains, Golf requires practice and commitment, much the way being a good Christian does. A golf course has its hazards, and you have to learn to get out of the traps. But just as in life, you always have another chance. The same is true with God.

In “The Drinking Problem,” which also aired in 1960, the reverend advocates a tee-totaling approach to alcohol. Though he concedes that the Bible does not prohibit moderate drinking, the concept of "Christian conscience” leads him to believe that even a few drinks can be sinful when they lead others with immoderate temperaments astray.

The third program from our holdings is a November 27, 1955, broadcast featuring Eugene Carson Blake, the Stated Clerk of the PCUSA and future president of the National Council of Churches. Titled “I Believe in God,” the program was part of a longer series on the Apostle’s Creed. Rev. Blake starts the sermon describing Rome’s precarious situation in 28 A.D. Despite Rome being the most powerful empire in the world, it was beset by problems that would eventually cause its downfall, including invasions from Germanic tribes, debt, rising unemployment, and a decline in public morality. Meanwhile, in Judea, a far-off outpost of the empire, Jesus Christ was preaching the Gospel. History, Rev. Blake contends, has proven Jesus’ words more lasting than the actions of the then-mighty Emperor Tiberius, a lesson he applies to the troubles of 1950s America. It is just as important to look to the Bible and your local church for help in troubled times, Blake says, as it is to any government.
In 2004, the Protestant Hour Inc. merged with the Episcopal Media Center to create the Alliance for Christian Media. The Protestant Hour continues to this day as Day One.
Print
New & Noteworthy