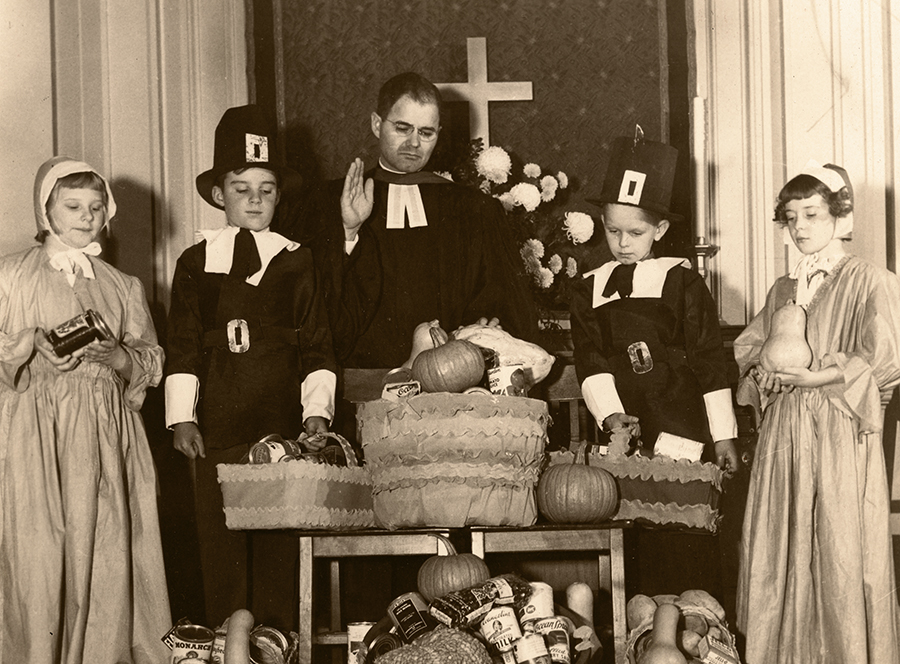 Donated food is blessed before being distributed. Sunday school children dressed as Puritans look on. Circa 1950 [Image Number: 3016]

Before we give thanks for our many blessings this Thanksgiving season, let us set the record straight[1] about one aspect of the Pilgrim story. The Pilgrims who landed at Plymouth in 1620 were not Puritans. Most were Anglicans (who had little desire to change the Church of England) or Separatists (who wanted to leave the Church entirely).

Another common misconception is that all early Presbyterians in the American Colonies were Scots-Irish. In fact, a vital branch of Presbyterian history was formed by those same English emigrants we just removed from the Pilgrim story: the Puritans.

The Puritans (who sought to “purify” the Church of England from within) didn’t arrive in the American Colonies until 1630. They were Calvinists, and preferred a Reformed style of service and polity--rule by elders instead of bishops. Those tenets traveled with a second wave of Puritan emigrants who set sail from Lynn in the Massachusetts Bay Colony in March 1640 to Long Island, in present day New York. There they founded what is widely considered the oldest Presbyterian congregation in America: First Presbyterian Church, Southampton, New York. Seven of the eight oldest Presbyterian churches in America were also established by Puritans on Long Island: Southold, 1640; Hempstead, 1643; East Hampton, 1648; Newtown, 1652; Huntington, 1658; Setauket, 1660; and Jamaica, 1662. New Castle Presbyterian Church in Delaware was founded in 1651. [2]

The Puritans who sailed out of Lynn were searching for fertile soil to farm; they landed at Cow Neck near present-day Manhasset. Legend states that they tore a symbol of Dutch sovereignty from a tree, were arrested and imprisoned by Dutch officials, and only released after being warned to leave the island for good. But instead of sailing back toward Massachusetts Bay, they sailed farther east along Long Island, eventually making their way to Southampton.

Around this time Puritans from near New Haven, in present day Connecticut, founded another settlement on Long Island called Southold. Several secondary sources state that the Rev. John Youngs, previously of England, formally organized a church there in October 1640.

Many consider Southold the first Presbyterian congregation in America, as Rev. Pierson, the first minister at Southampton, did not arrive there until November 1640. Others, pointing out that Southold remained independent for its first 200 years, only joining the PCUSA’s Presbytery of Long Island in 1831, give that distinction to Southampton. Additional Puritans, mostly from Connecticut, arrived in Long Island and established the remaining six churches. The Rev. Richard Denton, who came to America from England in 1630 with John Winthrop, the first colonial governor of the Massachusetts Bay Colony, founded Christ’s First Presbyterian Church in Hempstead after sailing from Stamford.

In 1648, a different group of Puritans bought several thousand acres of land from Montauk Indians and founded East Hampton on the eastern end of Long Island; there they quickly established a lay church. By 1651, the town council assigned a minister, Thomas James, and paid him a salary of 44 pounds and “one horse.”

With Thanksgiving, we celebrate how the Pilgrim’s landing at Plymouth Rock set off a chain of events that created America. But let us not forget that it was the Puritans who played a major role in forming our common Presbyterian heritage—in New England, Long Island, New Jersey, and beyond.

[1] While conducting research for this blog post, I found instances where secondary resources contradicted each other. For example, one prominent scholar gives the founding date of Newtown as 1642, another 1652. This post is based on my own research, and all decisions about which resources to use are my own.

[2] Scholars debate how “Presbyterian” these churches were, since the barriers between Presbyterians and Congregationalists were blurry at that time; the first Presbytery meeting in the American Colonies wouldn’t occur until 1706. Some call these early churches “Presbygational.”