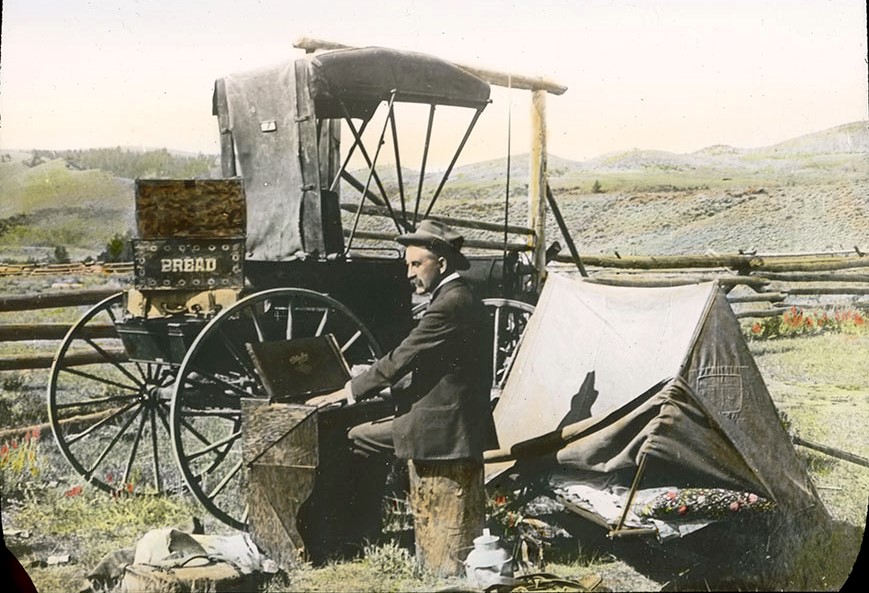 During his 25 years as a Sunday school missionary, William H. Schureman traveled 300,000 miles through the wilds of Wyoming and Colorado--a distance equal to 12 times around the earth, or a one-way trip to the moon. His faithful companion that entire time was Cornelia, a reed pump organ. As he wrote in 1939 to Rev. Thomas Pears, Jr., the manager of the Presbyterian Historical Society at the time, “I possess nothing that I prize more highly than this little music messenger that has journeyed so long with me.”

Cornelia was manufactured by the Bilhorn Brothers Organ Company of Chicago; Peter Bilhorn, an evangelist singer and composer, had developed the fold-out organ as an easy-to-transport instrument for his missionary work with cowboys. George P. Millard, of Peoria, Illinois, purchased the instrument for Mr. Schureman. It was named Cornelia in honor of Mr. Millard’s daughter, who passed away at age 16. The organ also shared the name of Mr. Schureman’s mother.

“Illustrating the way they go to Sunday school sometimes in the mountains. No reserved seats.” From W.H. Schureman’s slide collection. (Image No. 4691)

Mr. Schureman began his career as a Sunday school missionary in 1898, working for the presbyteries of Denver and Boulder. Based out of Cheyenne, his territory included seven counties in northern Colorado and all of Wyoming. He traveled by horse and buggy, covering 4 miles per hour, Cornelia beside him on the front seat. He traversed the West in that unhurried fashion for 17 years, until he purchased a Ford in 1914.

In addition to traveling 300,000 miles, Schureman helped to organize 215 Sunday schools and 35 Presbyterian churches, including the Second Presbyterian Church in Fort Collins, Colorado; he also helped establish 8 rural libraries. Schureman’s tireless work for the Presbyterian Board of Publication and Sabbath School Work even took him across the country. When not traveling the Rockies, he lectured at churches in the East, as well as at three General Assemblies, using colored slides--including ones posted here--to raise money.

Mr. Schureman retired in 1923. In 1938, he sent a letter to the Historical Society offering to donate his organ. “I shall have no more use for it and would like to place it where it would be safe from harm and where it would represent work done by the Board in pioneering days.”

“The Second Presbyterian Church of Fort Collins grew out of a mission Sunday school organized in 1902 and housed in this little building.” From W.H. Schureman’s slide collection. (Image No. 4690)

Pears replied quickly, saying the Society would gladly accept the organ into its holdings. When it arrived in November 1939, reporters from Philadelphia’s Evening Bulletin were on hand to photograph our newest material donation.

Mr. Schureman died of a heart attack in 1941, in Fort Collins. He was 88. Two years earlier, he wrote to Pears expressing how happy he was to have found a home for Cornelia. “I feel relieved to know that the little companion that has meant so much to me is to have a permanent abiding place.”

PHS has been Cornelia’s proud custodian for over 75 years. This fall, after work is completed fully restoring the instrument, musicians will again be able to bring from it a joyful noise.