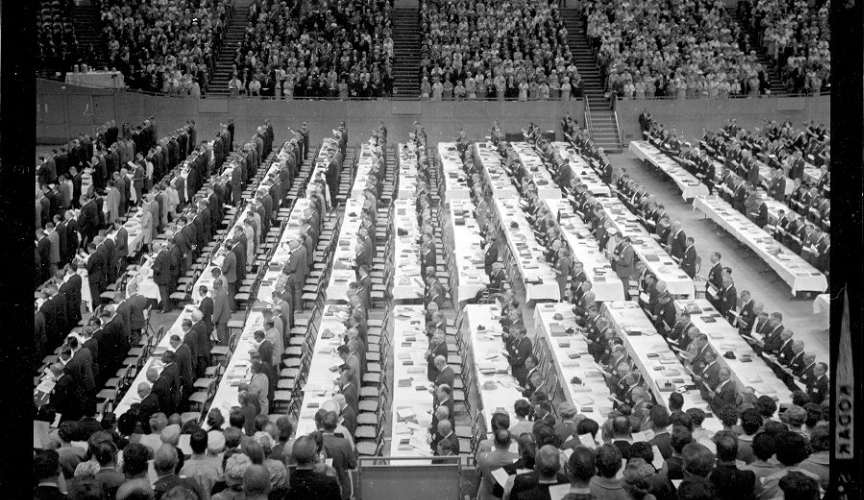 The General Assembly is right around the corner. Whether you're attending GA 222 or just want to learn more about its history, we have a collection of GA- and Portland-related content to get you ready.

Past Gatherings in the City of Roses

At the 104th General Assembly of the Presbyterian Church in the U.S.A, in 1842, the great controversy involved a debate over how to interpret the Bible. Read about this historical GA as part of our three-part fundamentalism series, by Reference Archivist David Koch.

One of our latest articles, by guest blogger Richard Reifsnyder, explores the history of nominating and electing the Stated Clerk: Decently But Not Always in Good Order: An Historical Overview of Choosing the PC(USA) Stated Clerk.

As part of our Living History video series, GA Moderators Rick Ufford-Chase and Bruce Reyes-Chow reflect on their times as General Assembly Moderators below. There are also interviews with GA Moderators Susan Andrews and Joan Gray.

Will you be attending GA 222? We would love to see you at our luncheon on June 21st.

For general information on contemporary Portland, check out the Committee on Local Arrangements GA 222 page.

Visit our online exhibit Sacred Spaces to learn about missionaries who preached to loggers in communities around Portland.

From loggers to the General Assembly of 1967, check out all of our Portland-related images in Pearl, our online archives.

To see a list of Portland churches represented in the Congregational Vertical Files at PHS, click here. For additional reference assistance with Presbyterian history in Portland, contact refdesk@history.pcusa.org.