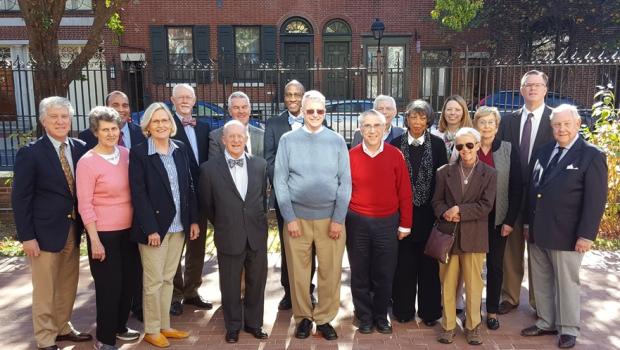 The staff of PHS enjoyed getting to know our four new Board Directors during our November meeting: Cathy Criss Adams, Jay Darling, Margaret Elliott and Peter Whitelock. Each brings to the Society an impressive array of experiences and insights that are already helping us serve Presbyterians, congregations, mid councils, and general researchers.

Cathy Criss Adams of Birmingham, Alabama, is a member of Independent Presbyterian Church. An acclaimed author and journalist, Cathy holds a B.A. in English and Journalism with a minor in Political Science from the University of Mississippi. She is the co-author of the history of her congregation, published in 2014—an item that was added to the PHS collections earlier this year.

Cathy serves numerous associations and organizations in her local community, including the Redmont Neighborhood Association, Birmingham Landmarks, Birmingham Botanical Gardens, Birmingham Historical Commission, Junior League of Birmingham, and Progress Study Club. She is a founding board member of the Birmingham Jefferson History Museum.

Gerald E. “Jay” Darling of Moorestown, New Jersey, is a partner at the law firm of Archer & Greiner, where he is a trusts and estates attorney. Jay holds a B.S. from Commerce Rider College, a J.D. from Delaware Law School, and an L.L.M. in Taxation from Temple Law School; he recently completed his Master of Theological Studies at the Palmer Seminary of Eastern University.

Jay is a board member and General Counsel to Urban Promise and a Ruling Elder at the First Presbyterian Church of Moorestown. He was a founding board member of Friends of MEND, an organization devoted to raising funds for “MEND”—a provider of housing for low-income individuals and families in Burlington County, New Jersey.

Margaret is the Executive Director of Crisis Control Ministry, Inc., in Winston-Salem, where she has worked since 1999. She is also the Clerk of Session and a Ruling Elder at Trinity Presbyterian Church, as well as a member of the Women’s Fund of Winston-Salem.

The only sad note from our November Board meeting was the absence of PHS friends, including five directors who recently rotated off the board—Betty Bergstrom, Ginny Rainey, Lisa Small, Paul Watermulder, and Louis Weeks. Samantha Piccolo, our previous Director of Development and Communications, began a new position at the Trust for Public Land in October. The current staff, board, and volunteers of the Presbyterian Historical Society would like to thank these leaders for their years of dedicated guidance, encouragement, and inspiration. We wish them all a wonderful Christmas season and look forward to keeping in touch in 2017.