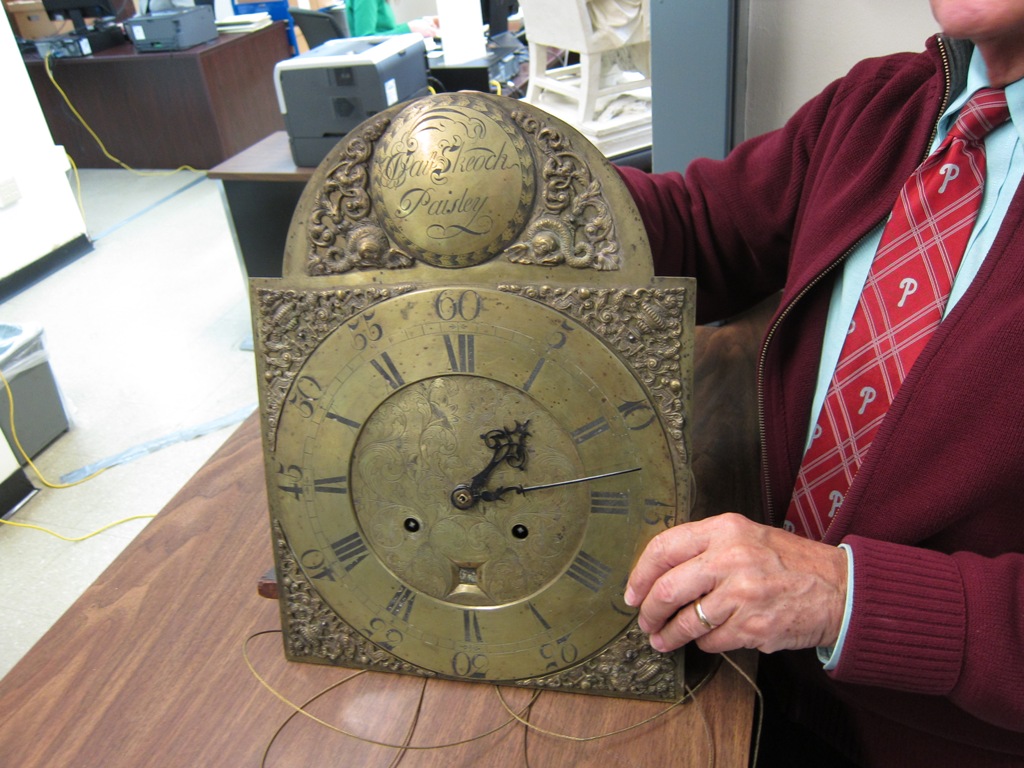 For our new exhibit, “Presbyterians and the American Revolution,” one of the weightier physical tasks the society undertook was moving the Witherspoon Clock. Relocating the timepiece and cabinet to our lobby took less than five minutes. G. David Fish, a professional clockmaker from John Fish & Sons, spent an hour disassembling and reassembling the lead counterweights, pendulum ball and rod, bonnet, front face, and movements.

What’s amazing about the clock is not just its size, age, and beauty, but how much lore surrounds it—some of it misleading.

When Swigart Associates, Inc., Insurance, of Huntington, Pennsylvania, first contacted the society in 1936 with the intention of selling the clock, it reported that the timepiece was not only brought to America by John Witherspoon, the only active clergyman to sign the Declaration of Independence, but was first owned by the imminent Scottish Reformer, John Knox.

The Knox legend was not a new one. Many believed John Witherspoon was a descendent of John Knox—despite there being no primary documentation to support that claim. When the Presbyterian wrote about the clock in its January 1886 issue, it asserted that the clock and cabinet were originally built for Rev. Knox.

Letters from Charles Reed of Swigart Associates supported this claim, stating that the 8-day clock with brass works and brass face in a solid mahogany cabinet was assembled in Paisley, Scotland, in 1560. Reed’s correspondence explained that he was representing someone who had to sell the clock because of “reduced circumstances, due to the past depression.” Thomas Pears, then manager of PHS, replied that the society was interested in acquiring the item.

It took four years of negotiations, and a vigorous fundraising campaign, but the society bought the clock in 1940 for $1,300—$22,620 in today’s dollars—from Charles Reed’s client, Lillian Woods. Part of the society’s success in raising the money was likely due to the supposed John Knox connection. One donor wrote that the timepiece should be renamed the “John Knox Clock.”

The problem was that the society had not really bought an artifact that had belonged to Rev. Knox. In 1975, the PHS newsletter Presbyerian Key ran a story claiming that the clock originally belonged to John Knox; that spring, the Key made a retraction, writing that “the article on the Witherspoon clock ... is a good example of enthusiasm for history overcoming a passion for accuracy.” The newsletter reported that a reader’s letters persuaded the staff to do further investigations, at which time it was discovered that the clock could not have been built before 1657, never mind in 1560.

The Witherspoon connection held. Research determined that the clock was indeed built in Paisley, Scotland, where Witherspoon was originally a minister. (Isabella Graham, the subject of our Heritage Sunday bulletin insert this year, was a member of Witherspoon’s Paisely congregation.)

When Witherspoon became president of the College of New Jersey in 1768, he brought the clock to America. According to Mr. Fish, the clock case, lead weights, and pendulum were most likely built in America after Witherspoon’s arrival. Documents show that an inventory of Witherspoon’s possessions after his death lists one clock and case worth $36.

When Witherspoon died, the clock came into the possession of his daughter Mary Ann (Marion or Marianne in some documents), who married Rev. James S. Woods of Lewiston, Pennsylvania. When Rev. Woods passed away, ownership of the clock transferred to his son, William Harris Woods, an attorney in Huntingdon, Pennsylvania. The clock was later inherited by Mr. Woods’ son, George Woods, who died in 1922. His wife, Lillian, sold the clock to the society.

The Key ended its retraction with the words “we thank our correspondents again, and will probably issue a definitive up-date should it ever become available.” I could not find anything published in later editions of the Key, or in other society communications, about the clock’s first century. Hopefully this post makes good on that promise, and calls full time on the enticing but inaccurate Knox myth.

The Witherspoon Clock in its new location in the society's lobby, 2017
Print
New & Noteworthy