In the mid-1970s, the General Assembly of the United Presbyterian Church in the U.S.A. (UPCUSA) received a flurry of questions concerning homosexuality. Bill Silver, an openly gay Presbyterian, was a candidate for ordination in the Presbytery of New York, which had asked the General Assembly for “definitive guidance” on how to proceed. Around the same time, other presbyteries across the country sent in overtures that either reinforced the New York Presbytery’s call for definitive guidance or asked the assembly to reaffirm the presbytery’s own power to decide who to ordain.

The General Assembly answered by forming a task force to study homosexuality, focused on whether to ordain practicing homosexuals. Nineteen members were appointed in September 1976 with Virginia West Davidson serving as chairperson. For the next two years, the UPCUSA Task Force to Study Homosexuality met seven times to discuss their findings. The meetings included conversations about scientific and religious articles on homosexuality, often leading to lengthy debates as members clashed over biblical interpretations. 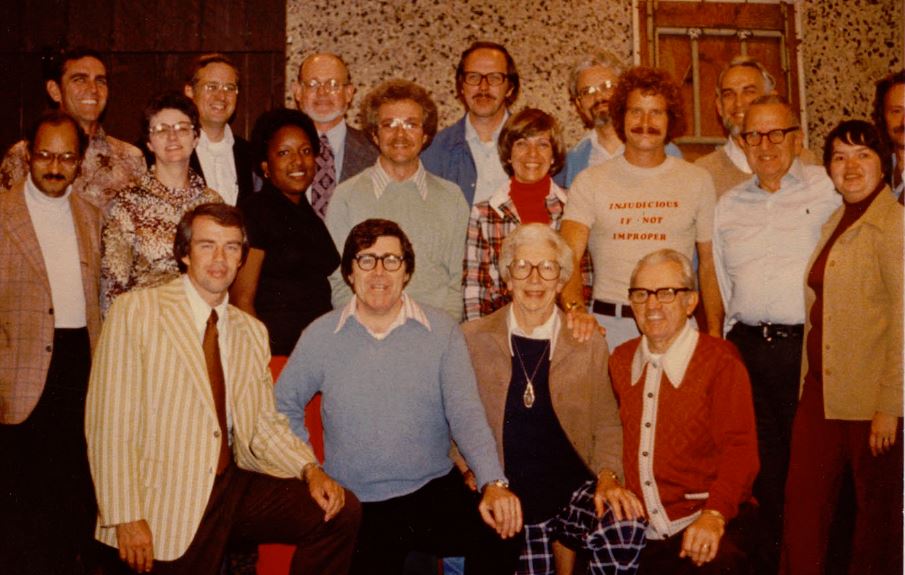 The task force was also charged with studying the general opinions of the church. Four regional hearings were held to gather statements from Presbyterians, and individuals who missed the hearings were encouraged to mail their testimonies. Letters poured into the task force that implored it to carefully re-examine Romans 1, warned against giving in to social trends, and asked for information on how much funding the task force received. Others praised the task force for starting a conversation about homosexuality. A few individuals anonymously shared their stories as gay, lesbian, or bisexual Presbyterians. One gay church member pleaded with the task force and entire UPCUSA for acceptance:

“So, as you consider the role of the gay person in the Church, I plead with you – please do not shut me out. I need the Church . . . Please let me stay – and let other despairing gays know that they, too, can come in. Christ exhorted us to ‘Love your neighbor as yourself.’ I am your neighbor.”

The task force hoped not only to generate responses to their work, but to assist presbyteries in launching their own studies. From April to June 1977, they released two study packets that included copies of articles on homosexuality, testimonies they had received, and suggestions for how to host homosexuality information days. The study packets flew into presbyteries, with 5,000 copies purchased before December 1, 1977. 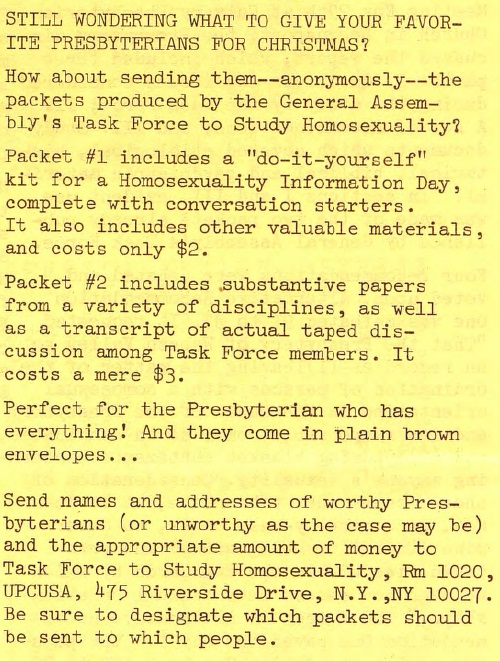 The divided report of the task force, as well as the sheer volume of opinions it received from Presbyterians, exemplified how debates over homosexuality threatened to split the UPCUSA as early as 1976. And yet the task force stood apart as a model for how church members could find common ground in their faith even as they advocated for separate paths forward. Chris Glaser, the only openly gay member of the task force, published a brief article in the March 1978 issue of the Presbyterian Gay Caucus newsletter. He discussed the task force’s inner dynamics:

“We worked many long hours together, we ate meals together, we shared living space together, we faced challenges together, we even found a little time to play together, and we prayed and worshipped together. It was this life together within our community of faith which helped us deal creatively and lovingly as we proceeded with our difficult task . . . [T]hough we were ultimately divided, in the process of it all we came to respect, trust, love, and really listen to one another. There was not a single Task Force member from whom I did not feel at least some caring and support for me as a child of God.”

Although the General Assembly’s definitive guidance reiterated the status quo regarding ordination, the task force initiated a conversation about the rights of LGBTQIA+ Presbyterians in a way that created hope that church members with very different opinions could find the grace to work alongside one another.

The UPCUSA Task Force to Study Homosexuality Records have been processed as a part of the Pam Byers Memorial Fund. To browse digitized material related to LGBTQIA+ history in the Presbyterian Church, visit our Pearl online archives.