In Her Own Right 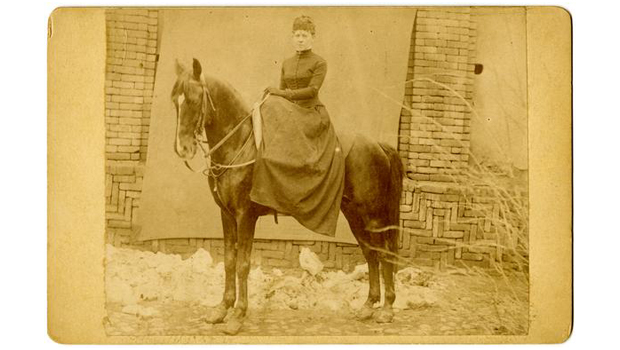 In celebration of Women’s History Month, PHS is happy to announce the digitization of four collections that spotlight Presbyterian women’s experiences in the late nineteenth century.

PHS was able to digitize these stories as part of In Her Own Right: Women Asserting Their Civil Rights, 1820-1920, a pilot-project executed by the Philadelphia Area Consortium of Special Collections Libraries (PACSCL) with funding from the National Endowment of the Humanities (NEH). The narratives of these women are wide ranging, but each illustrates a devotion to their Presbyterian faith and to their missions.

Sarah Belknap “Belle” Sherwood was born on December 13, 1854 in Ballston, New York as one of five children. After graduating from Elmira College in 1875, she taught at Goraly Seminary in Newburgh, New York from 1879 through 1882. In 1883 Belle was appointed to the East Persia Mission and stationed in Hamadan. Soon after arriving, Belle married fellow missionary, James W. Hawkes, in October 1884. 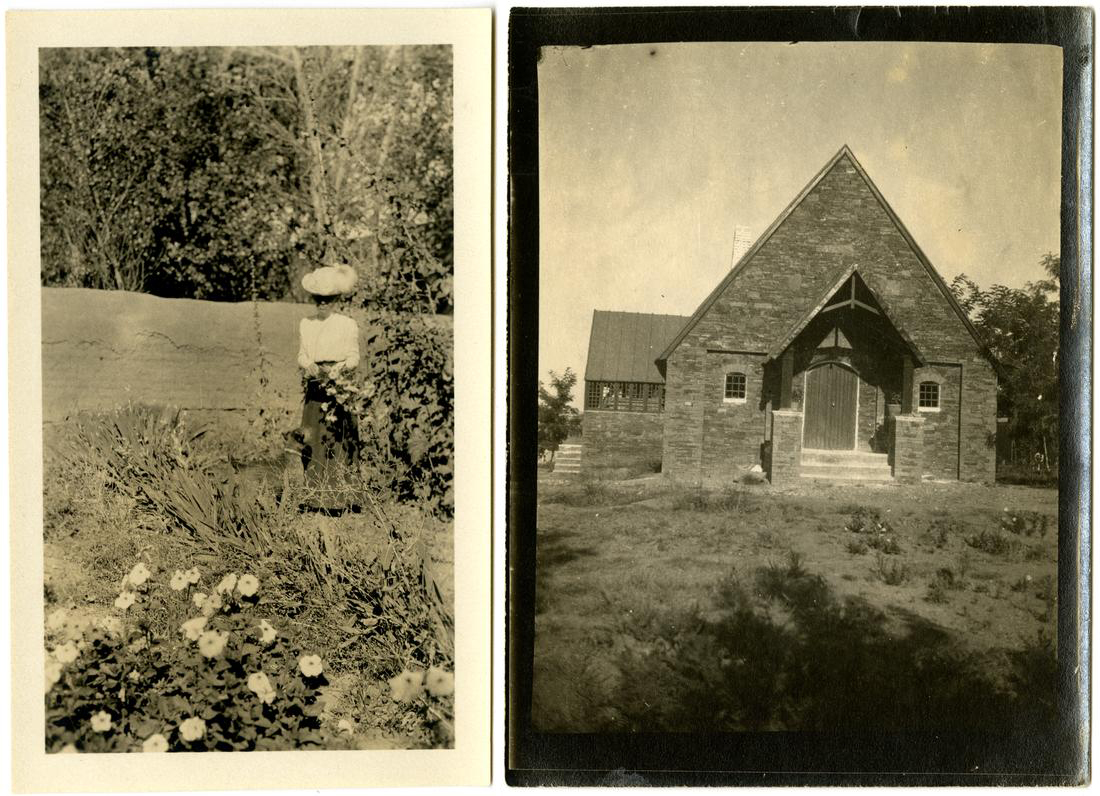 For thirty-six years, Belle dedicated herself to bettering the wellbeing of Persian women and girls. She was passionate about education and taught at a school for girls in Hamadān, in today’s Iran. Outside of the classroom, Belle ministered to the basic needs of Armenian, Jewish, and Muslim women and children. Her home became a center for missionary service; during the First World War, Belle and James used it to care for refugees. Belle’s service to the Persian people lasted until her death on December 4, 1919.

Materials in Belle’s collection include correspondence, diaries, and photographs. She wrote many pages of correspondence over the course of her mission service, primarily addressed to her family with whom she shared a close kinship despite their geographical differences. In addition, Belle kept detailed diaries from the years 1880 through 1919 depicting her daily life in Iran. Her personal photographs range from portraits of herself to light-hearted shots of her pet cats and horses. You can view the entirety of Belle Hawkes’ personal papers in Pearl.

Although there is not much documentation about Mary Louise Blatchley’s religious faith during her early life and upbringing, her passion and dedication to foreign mission work is unmistakable in her personal papers. Mary Louise’s roots as a Presbyterian began in 1889 when she joined Wayne Presbyterian Church in Wayne, Pennsylvania, alongside her parents, Charles and Mary, and three older siblings. 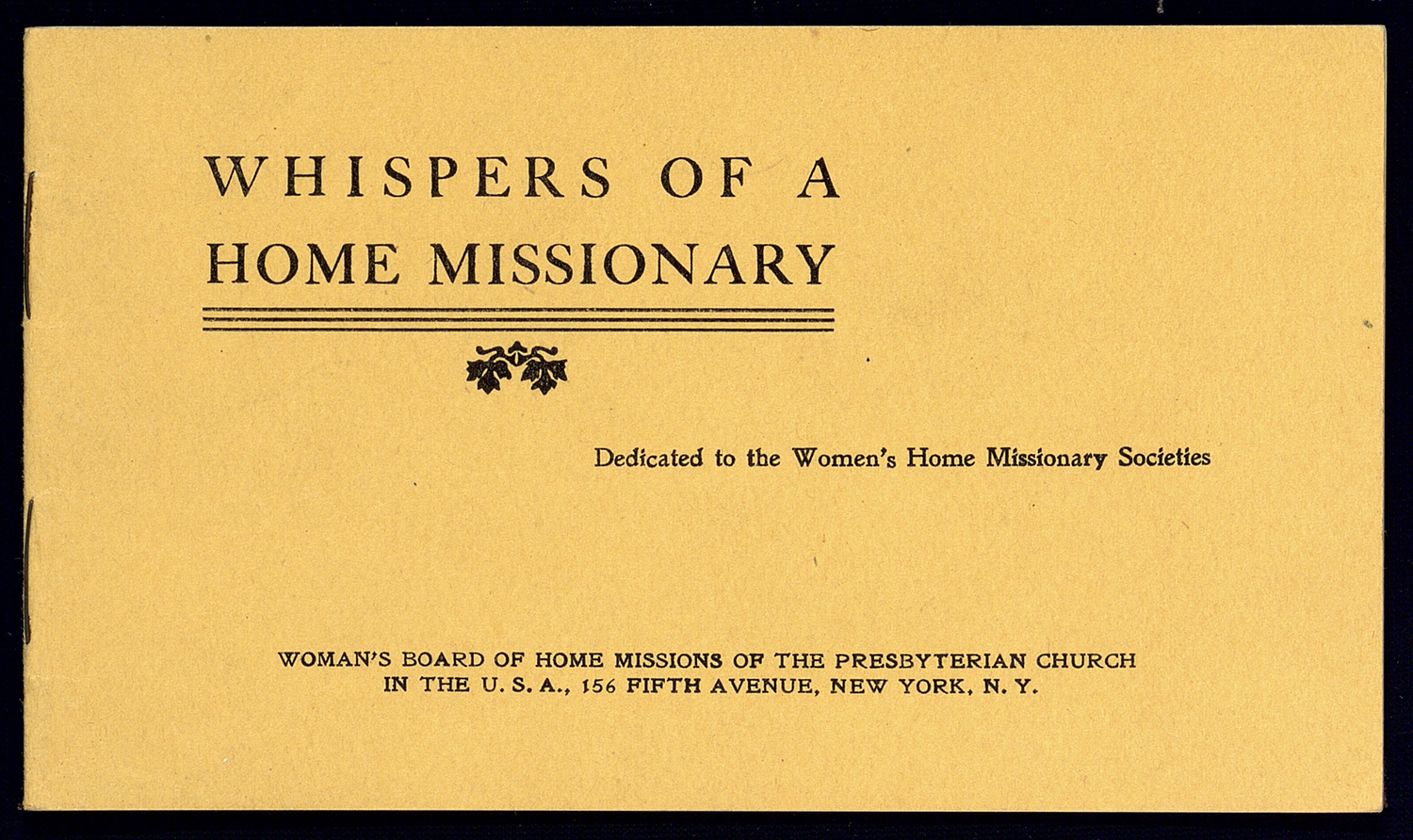 Whipsers of a Home Missionary. Correspondence beween missionaries and women's missionary societies. Published by the Presbyterian Church in the U.S.A. Board of Home Missions, 1905. From the Mary Louise Blatchley Papers. [Pearl ID: 158712]

From 1897 through 1910, she served as Secretary for Young People’s Work for the Presbytery of Chester's branch of the Women’s Foreign Missionary Society. In this role, Mary Louise spoke frequently before various women’s and children’s societies about the importance of foreign missions. Her fervor for mission work often followed her home, where on numerous occasions she hosted missionaries from overseas. Until at least 1923 she remained connected to Wayne Presbyterian Church, where she supervised several youth groups including the Daughters of Zion, the Boys’ Mission Band, and the Helen Newton Mission Circle.

Materials in Mary Louise’s collection include correspondence, speeches, pamphlets, and diaries. Some of her most notable speeches include ones delivered to Christian Endeavor Societies throughout the Presbytery of Chester. In addition, Mary Louise saved numerous publications by the Woman's Foreign Missionary Society of the Presbyterian Church  that spoke to her interests, such as “Eleven reasons for attending missionary meetings.” You can view the entirety of Mary Louise Blatchley’s personal papers in Pearl.

Rachel Kerr Johnson was born in 1837 in Hookstown, Pennsylvania to David and Mary Kerr. Beginning in 1856, she attended the Female Seminary in Steubenville, Ohio. After graduation, Rachel and her husband, William F. (Will) Johnson served as missionaries in the northwestern provinces of India beginning in 1860.

As Will embarked on his evangelistic mission work, Rachel adjusted to her new life as a homemaker in India, raising the couple’s eight children: William, Mary, Edwin, Albert, Jane “Jennie,” Frank, Frederick, and Dora Elizabeth “Bessie.” After twenty-four years of service, Will and Rachel decided to retire from the mission in India in 1884. When the couple returned to the United States, Rachel’s connection to and appreciation for mission work continued. She frequently spoke at women’s missionary society meetings in Western Pennsylvania, Eastern Ohio, and Northern West Virginia. In 1887, the family relocated to North Carolina, where Rachel lived until her death in 1888. 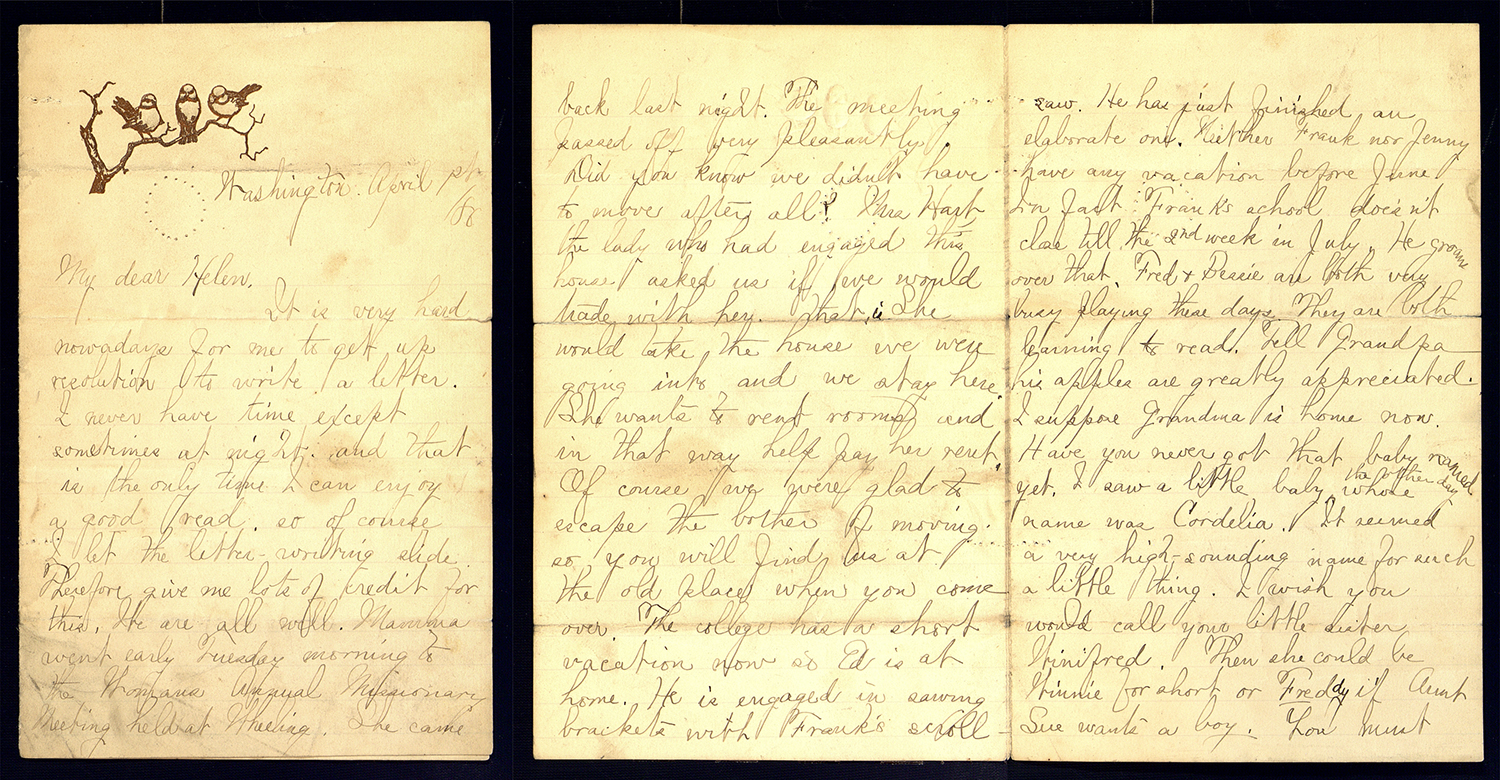 Materials in this collection consist entirely of Rachel’s correspondence from 1854 through 1888, with additional letters written by her husband and daughters, Mary and Jennie. Despite the distance between them, Rachel remained deeply attached to her relatives in the United States while she served in India. The overwhelming majority of correspondence is with family members including her siblings, niece, and two eldest children. Rachel’s letters not only illustrate the complex dynamics of family relations, but also provide glimpses into the domestic side of mission life in India. You can view the entirety of Rachel Kerr Johnson’s personal papers in Pearl.

The Ballston Female Heathen School Society (please see our policy on transcribing offensive / outdated language in Pearl) was founded in 1817 by fifty-seven women from the Ballston region of New York. The society’s mission was to support the work of the American Board of Commissioners for Foreign Missions and Princeton Theological Seminary. These women devoted themselves to the organizations’ purpose and quickly increased their annual contributions to at least one dollar per person. As the society grew, its scope expanded to include support for mission work in Beirut, Syria, and Iran, as well as to Native Americans near Detroit. 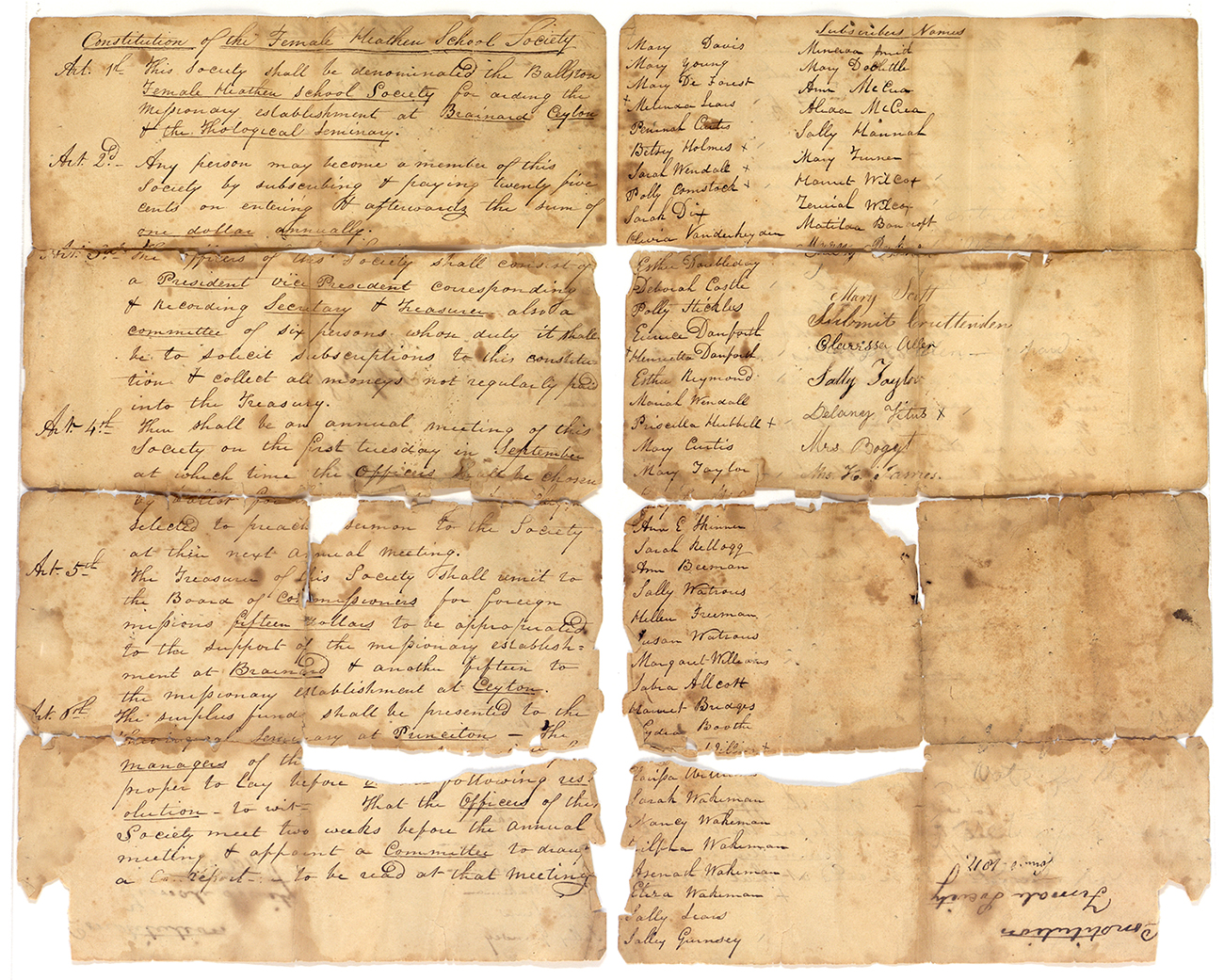 The materials in this collection chronicle the foundational years of the organization through 1885, as well as its expansion beyond its initial mission statement. The materials include a 1817 organizational constitution, several annual reports between 1820 and 1850, subscriber rolls with contribution amounts, and correspondence from support recipients. You can view the entirety of the Ballston school society’s records in Pearl.

So much can be learned from these four collections about the history of Presbyterian women at home and abroad during the turn of the century; we are very excited to share them in Pearl. Our immense gratitude goes to the In Her Own Right project team leaders and staff members for their guidance and support, and also to the NEH for funding such a critical project. You can discover further untold histories of women provided by other PACSCL institutions at the In Her Own Right website.

To learn more about the lives and careers of Presbyterian women in the history of the Presbyterian Church U.S.A. and its predecessor denominations, you can also view our Women’s History collection in Pearl.