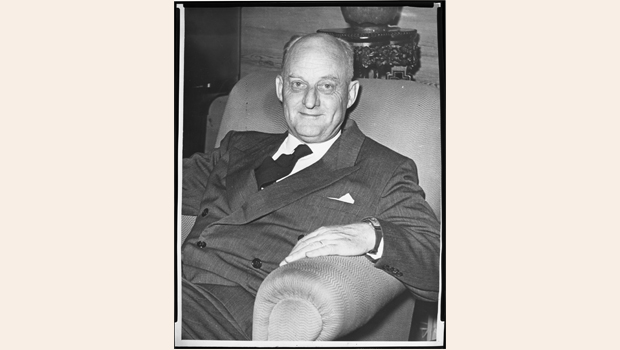 In 1946, the world felt uncertain. A massive war had devastated much of Europe, forcing some countries to rebuild while others grappled with their newfound influence. Humanitarian crises, threats of nuclear war, economic and political duress, and overall fear destabilized the globe.

In response to this anxiety, the Religious News Service--an independent interfaith news organization affiliated with the National Conference of Jews and Christians--began to publish weekly columns that addressed social, cultural, and political questions from a moral viewpoint. Written by renowned theologian Reinhold Niebuhr, the columns covered subjects that affected people domestically and abroad. 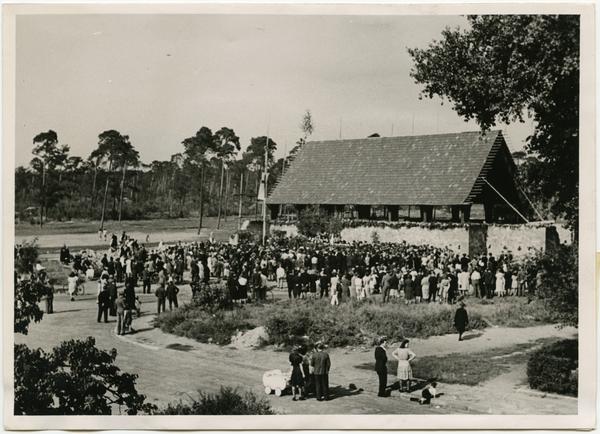 Reinhold Niebuhr was born in Wright City, Missouri on June 21, 1892 to German immigrants who valued theological education. His father was an evangelist pastor, his brother Richard a theologian, and his sister Hulda a divinity professor. Reinhold attended Eden Theological Seminary in St. Louis and graduated from Yale Divinity School in 1914. He received his ordination from the Evangelical Synod of North America in 1915 and served as a pastor of the Bethel Evangelical Church in Detroit until 1928. After Niebuhr left Detroit, he spent thirty years as Professor of Applied Christianity at Union Theological Seminary in New York City. Throughout his tenure, Niebuhr was a steadfast advocate for equality and justice, made evident through his tackling of contemporary topics in his weekly columns, which ran until 1948. 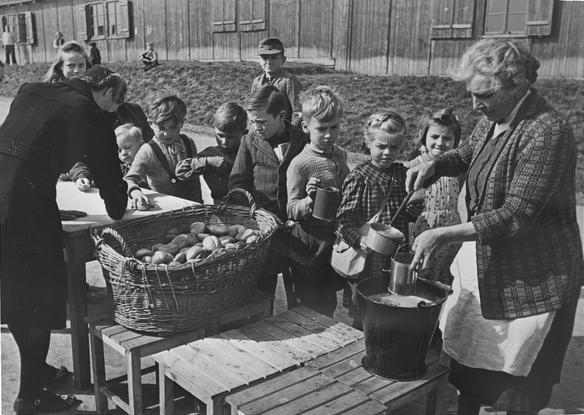 When the Religious News Service began publishing Niebuhr’s columns, the majority of the world was struggling in the aftermath of World War II. He wrote, “No period in the history of mankind has been more tragic than ours. We have experienced two world wars in two generations and they have achieved a degree of destructiveness which was beyond the imagination of other ages” [June 21, 1947]. Many of his columns spoke directly to post-war concerns such as the difficulty of Germany’s reconstruction. He also pondered America’s emergence as a “superpower” and the obligation the country had to aid war-devastated Europe. Niebuhr believed that Americans and Christians around the world had a moral obligation to respond to the subsequent refugee crisis. 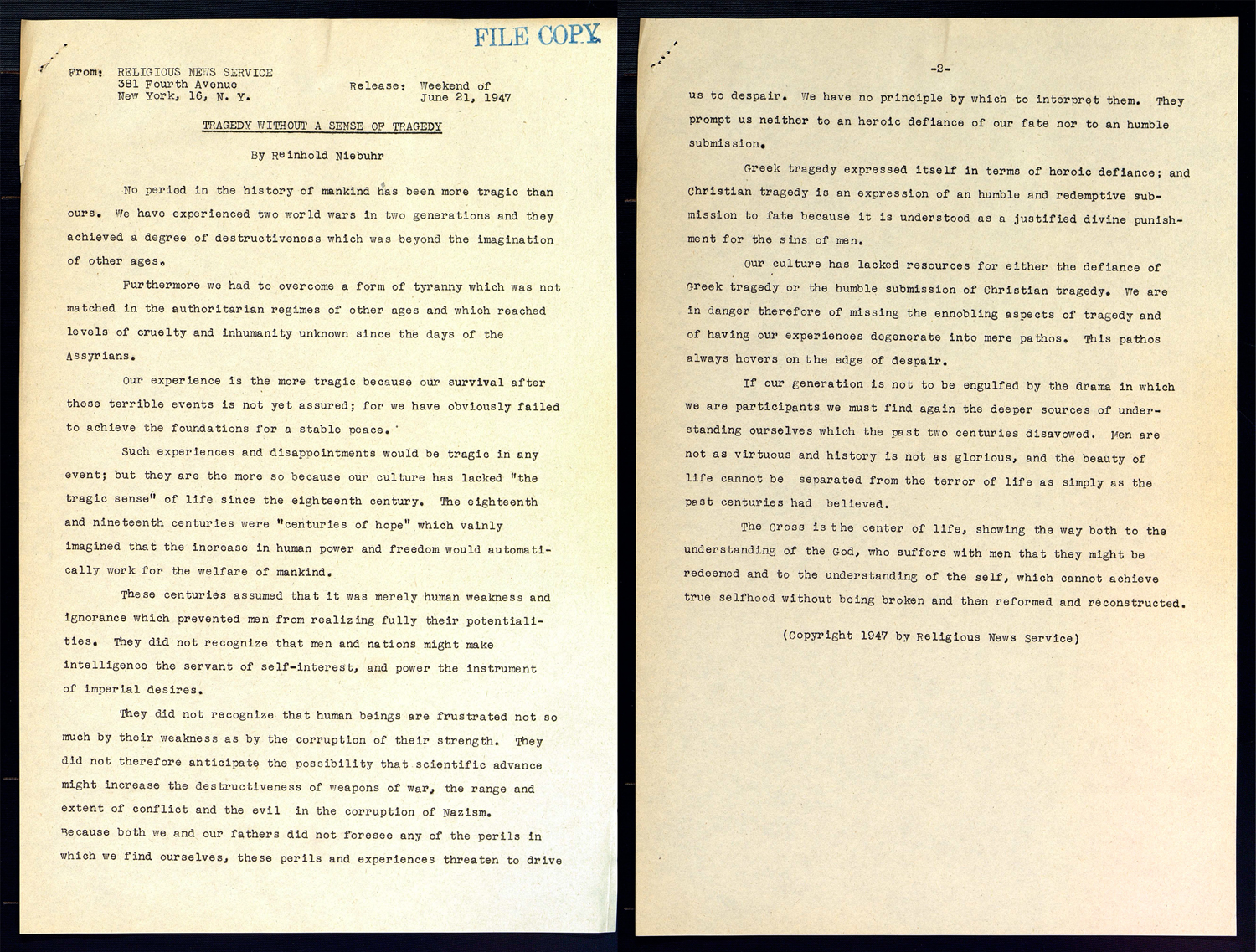 Beyond the consequences of the war, the three years in which the columns ran (1946-1948) witnessed other transformations . His articles documented the development of the Jewish-Arab conflict in Palestine, the end of British colonization in India, and the rising threats of nuclear warfare. He also traced the economic and political shifts in countries, including the rise of socialism in France and communism in China and Yugoslavia and the creation of an apartheid state in South Africa. Niebuhr also reported on the formation of the World Council of Churches in 1948, which he referred to as “a mutually beneficial exploration of the deeper meaning of a shared faith” [September 18, 1948]. 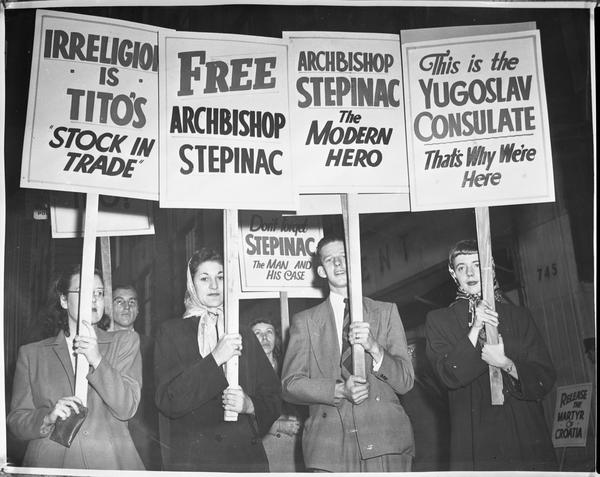 As an American, Reinhold Niebuhr offered his opinions on different aspects of Truman’s presidency, such as the railroad strike of 1946, his controversial luxury tax, and his near defeat to Thomas Dewey in 1948. He wrote candidly about the United States’ responsibility as a world leader and criticized the State Department’s immigration policies, writing, “We are hardly opening the doors wide enough to meet our most minimal obligations to a needy world” [February 22, 1947]. He also condemned the legalized system of segregation, going as far as comparing it to the apartheid state in South Africa.

Niebuhr's columns, as well as being invaluable resources for current events, encouraged readers to consider questions of virtue and righteousness. He wrote about a range of topics from broad concepts of humanitarianism to more pointed commentary about upholding fairness and equality in marriage. He believed that all humans, especially religious ones, had an obligation to create a fair and just world for one another to live in. 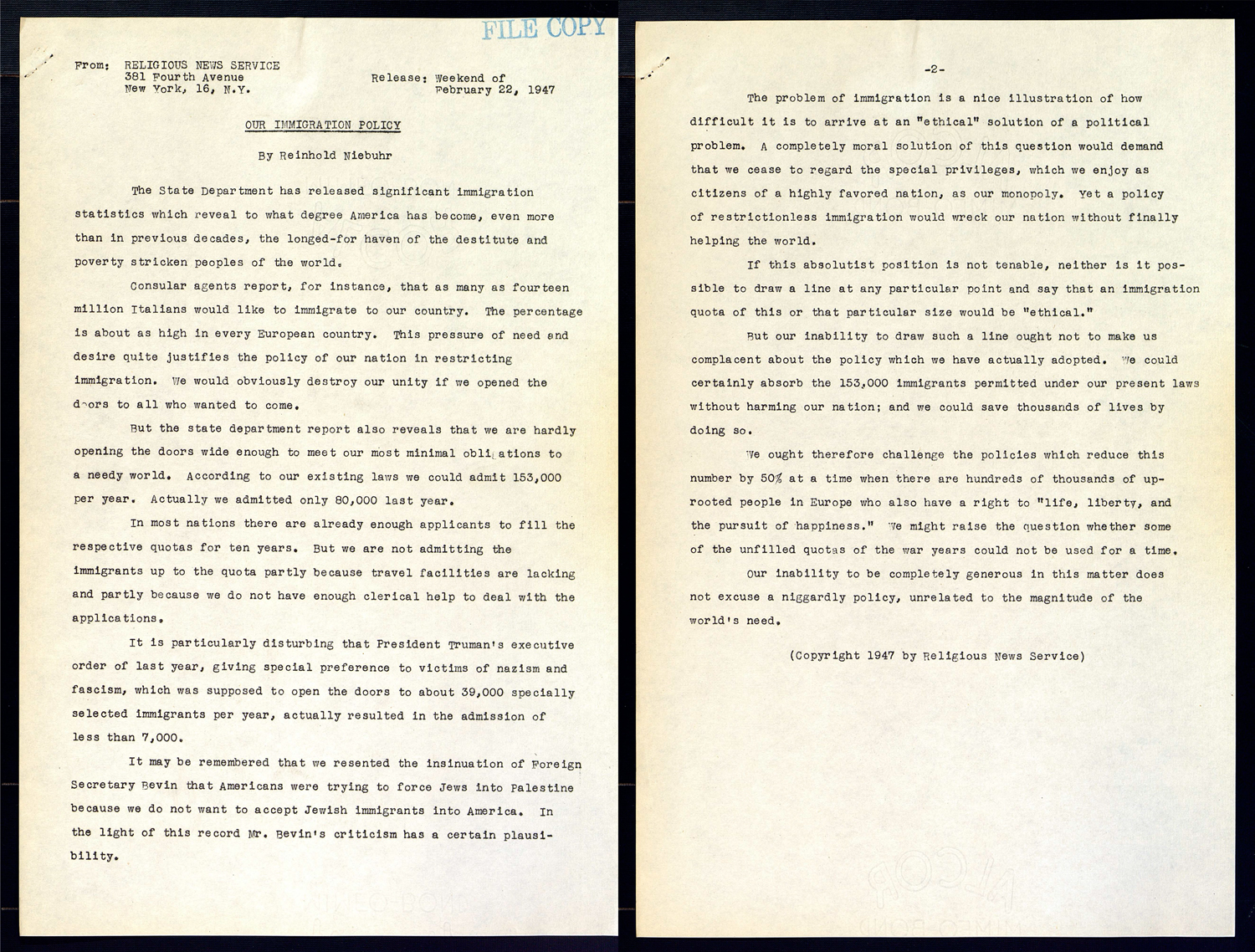 Niebuhr recognized the difficult social and political moment in which he was writing. He urged his audience to rely on their faith and principles to guide them through any periods of struggle or peril. He encouraged civic engagement through local action, such as voluntary rationing of food to help the needy.

It is easy to see the historical relevance of Niebuhr’s teachings during the COVID-19 crisis, when every day there seems to be more uncertainty. His columns document the issues of his time, but the lessons remain true to this day, offering optimism and hope when fear seems insurmountable. If we focus on ways we can help one another today, we can look forward to what tomorrow will bring.