The Search for "Middle Ground" Amidst Dissent: Covenant Network Records 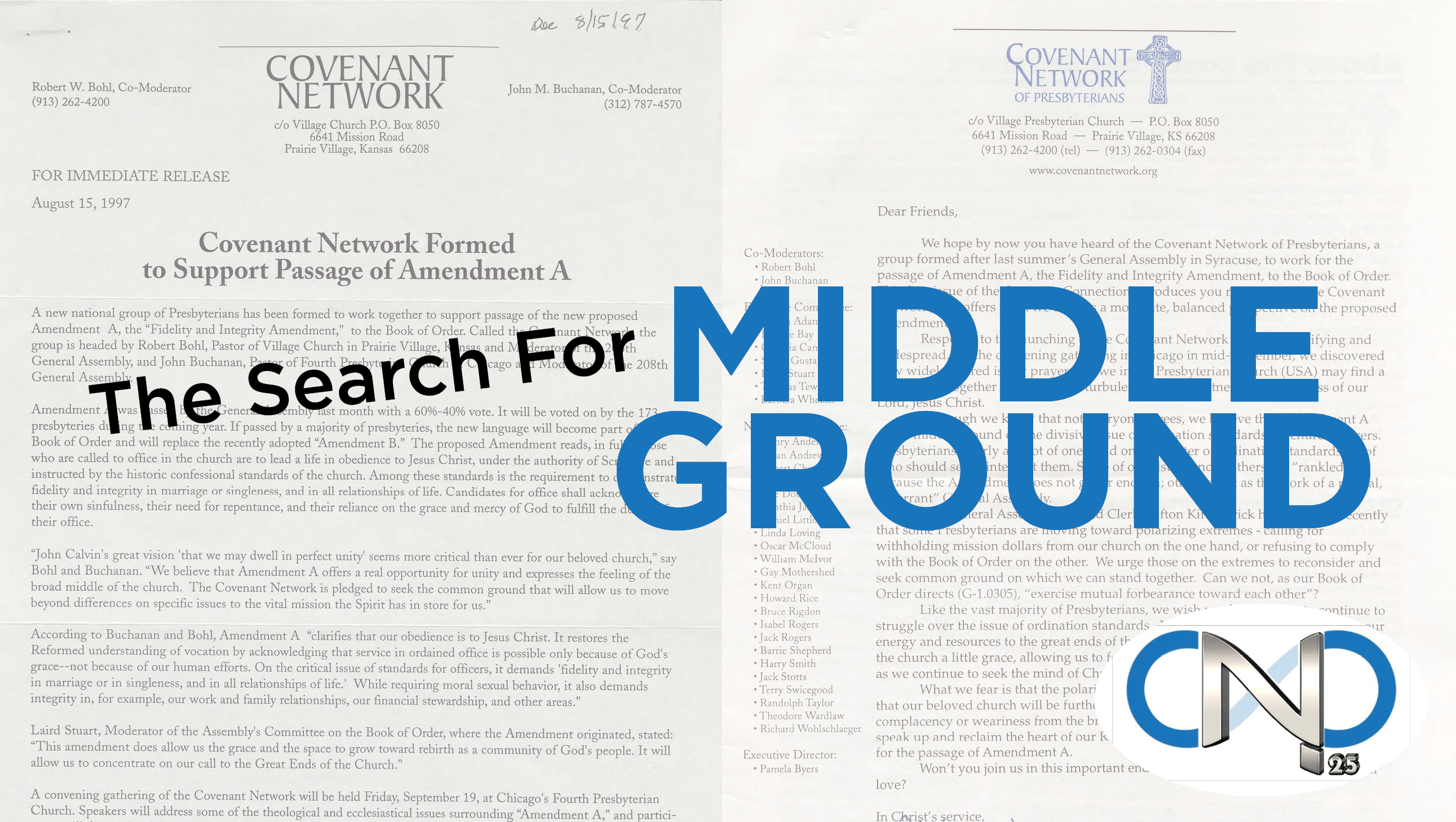 While exploring PHS’s RG 531, an archival collection consisting of the records of the Covenant Network of Presbyterians, I came across a plethora of documents that embodied some intense emotions. In the fight for LGBTQ ordination rites, there were many strong opinions held—on both sides.

One of the first things I stumbled upon was a piece of correspondence dated January 9, 1998, addressed to the Elder Commissioner of Fourth Presbyterian Church in Chicago. The letter, written by a member of the congregation, entreats the commissioner to vote against Amendment A at the meeting being held in the upcoming week. A major speaking point of the Covenant Network of Presbyterians was the replacement of Amendment B, also known as G-6.0106b or the “fidelity-chastity” amendment, with Amendment A. The Covenant Network proposed that the language of Amendment B, which explicitly names fidelity in marriage or chastity in singleness as ordination requirements, be replaced with the more inclusive language of Amendment A, which highlights the concepts of fidelity and integrity instead. The reasons for this, the writer argues, are multiple. Among them: the amendment would undermine the institution of marriage, disavow the view of sex held by all sects of Christianity since their founding centuries ago, and endorse homosexuality as the moral equivalent of marriage. Further, the writer then offered the commissioner of their church the following three alphabetized statements:

Excerpt from a letter found in RG 531, in which the author urges the Elder Commissioner of Fourth Presbyterian Church to vote against Amendment A.

Another document I discovered, from the side of the assenters for Amendment A, was an announcement written by one Mary L. Foulke, with the title: “Deciding to Seek Release from Ordained Ministry.” Foulke, who, at the time of writing, had been a practicing minister for nine years, shares an upsetting truth with her audience:

"At this point now in my ministry I am finding ordination to be more of a barrier than a help to my vocation…Most of us know that Amendment B is really about excluding gay and lesbian Presbyterians from full membership in our church…Let me be clear, I believe that excluding lesbian, gay, bisexual and transgender people from full membership in Christ’s church is sin. The PCUSA continues in this sin, and continues to benefit from a long history of talented gay and lesbian clergy, elders and other church workers; the only requirement is silence, self-hatred and lying. I personally can no longer participate in this ecclesiastical exploitation…" 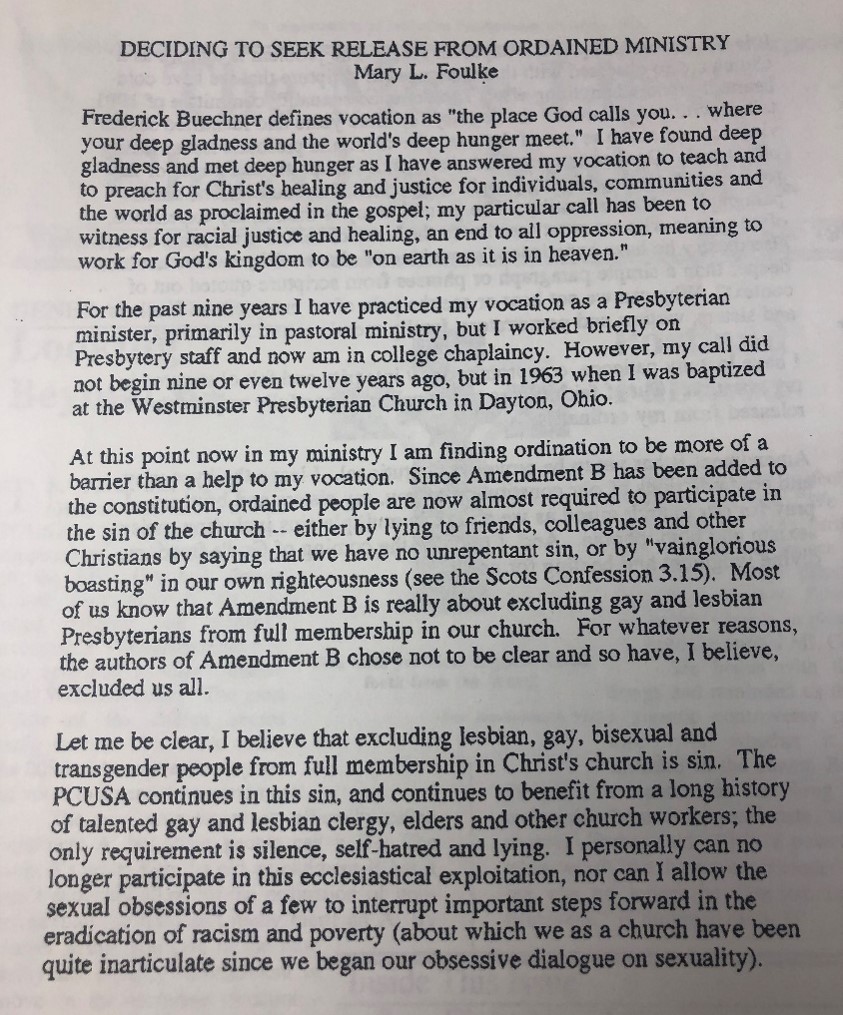 In the midst of these documents, which felt heavy with importance and feeling, I also came across some very positive glimpses of grace. These materialized in records of emails sent in response to what looked to be the first edition of the Covenant Network’s newsletter, Covenant Connection. One person typed, “The November mailing…came like manna from heaven.” Another wrote, “…thought you might like to know that there are many out here who are with and behind you 100%.” Yet another penned, “I really appreciate the voice for the middle that seeks the common ground that surely God is providing.”

This last one puzzled me a bit. Middle ground? What is this referencing? I did some more digging, and in Box 4, Folder 14, labeled “General Assembly resources, 2001,” I found a tri-fold pamphlet with the words “WE NEED MIDDLE GROUND” printed in large block letters across the top. The brochure, which was dispersed to attendees at the 2001 meeting, offers a compromise of sorts for those on the fence, those dissenting, and, too, those in support of Amendment A. The language used is very poignant, simple, and packs quite a punch: “Perhaps we should simply say what Jesus said about homosexuality: Nothing.” Covenant Network, at this point—four years after the passing of Amendment B—morphed their language to focus on neutrality. “Let’s take the middle way,” the pamphlet suggested to its reader, “neither requiring nor prohibiting ordained service by gay and lesbian Presbyterians.”

Further research led to the surfacing of a press release, from the same folder, dated June 13, 2001, with the title: “Covenant Network Boards Unanimously Endorse Removal of G-6.0106b as ‘Middle Ground.’” Phrases that leapt out at me as I scanned the document included, “mutual forbearance to each other,” and the proposal of a “new authoritative interpretation to supersede those issued since 1978,” the recommendation of which would add the following sentence to the Book of Order: “Their (candidates’) suitability for office is determined by the governing body where the examination for ordination or installation takes place, guided by Scriptural and constitutional standards, under the authority and Lordship of Jesus Christ.” This proposal effectively decentralizes the ordination question, leaving it up to each presbytery to decide whether to ordain LGBTQ ministers.

This perusal of documents relating to the “Middle Ground” movement within the Covenant Network’s efforts toward full and inclusive unity within the PC(USA) provided evidence of the organization’s unwavering commitment to their goal. The ability to adapt their campaigns, language, and resources to better suit their current audience as the years progressed was effective. From 1997, the year of their inception, through 2011, when Amendment A was finally passed, those involved in the Covenant Network continued to stand up again and again after being knocked down; as Amendment A was denied year after year, instead of lessening their efforts or disengaging altogether, the organization continued to facilitate dialogue, present at General Assemblies and various meetings across the nation, and strategize with local Covenant Network chapters. Their courage, dedication, and persistence proved unwavering—and now 25 years later, we continue to celebrate their awe-inspiring efforts.