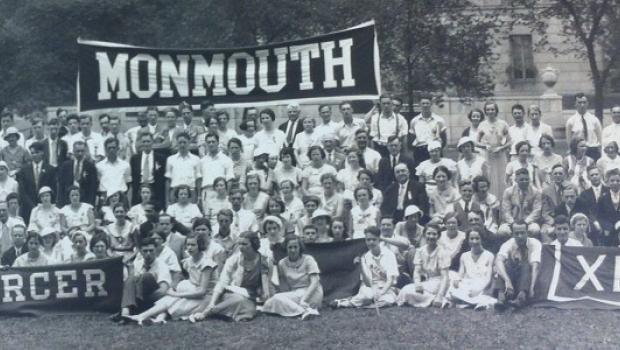 From William Tennent's Log College, to the seminaries at Princeton and Pittsburgh and Richmond, American Presbyterians since 1794 have dutifully supported the young men and women who are called to studiously prepare for the ministry. Though in the popular imagination Presbyterian seminaries are havens for dour, devoted men, at least one of them was home to an oddball drinking society named for an imaginary minister. In honor of Presbyterian seminarians everywhere returning to campus, here is the story of the first and arguably the only molar theologian, Atkins Flegley, A.B., B.D., D.D.S. According to James Walther's Ever a frontier : the bicentennial history of the Pittsburgh Theological Seminary (1994), at Western Theological Seminary in Pittsburgh in the 1950s, a group of students discovered an unidentified portrait in storage.

The unnamed man was christened Atkins Flegley, given dates of birth (1794) and death (1787) dates of professorial tenure, 1794-1787 sic, and was hung alongside other professors in Long Hall. By 1969, Flegley had moved into the office of Dr. Scott at PTS, who asked around for an explanation and received a letter from the Atkins Flegley Society. Organized in 1962, the Society -- formally the Atkins Flegley Theological Society, Prayer Cell and Drinking Club -- gathered in the name of an imaginary "dead white guy" to discuss real theology and to consume beer. Members carried skeleton keys as proof of their identity. As the letter to Dr. Scott said, "If he cannot produce an ornate, inscribed key of considerable size, he is an imposter."

After many years dormant, in 1998 the Witherspoon Press published Flegley's tract "What is a Presbyterian?" as part of its Presbyterian Beliefs series. In it, Flegley identifies a thirst for social justice as fundamentally Presbyterian. He also reminds us that deliberative self-government is typically Presbyterian: "When they have a policy or an action to consider, they pray, talk, talk, talk, and then they vote.[...]The Holy Spirit lives in individuals but works through the community. Presbyterians do not think alike and may disagree on any given issue. Sometimes being a Presbyterian may come down to this: thinking hard on a certain issue; advocating a certain policy or action; losing the vote yet continuing faithful support and life in the church." In 2008, a revived Society sponsored the first annual Atkins Flegley lecture series in molar theology, featuring Steven Tuell's "House of ivory, or house of teeth : quality dentistry in the Old Testament."

Last year, at the fiftieth reunion of the class of 1962, the archives at Pittsburgh Theological Seminary received from a founding member, a skeleton key -- proof, whatever Atkins Flegley was, dentist or theologian or both, that the people gathered in his honor are not imposters.

*** Update: November 11, 2013: One of the founding members of the Atkins Flegley Society has written PHS to clarify that the dates written beneath Flegley's portrait were of his tenure as a professor, not his birth and death, adding, "I'll leave it to you to figure out the anonomy of those dates."