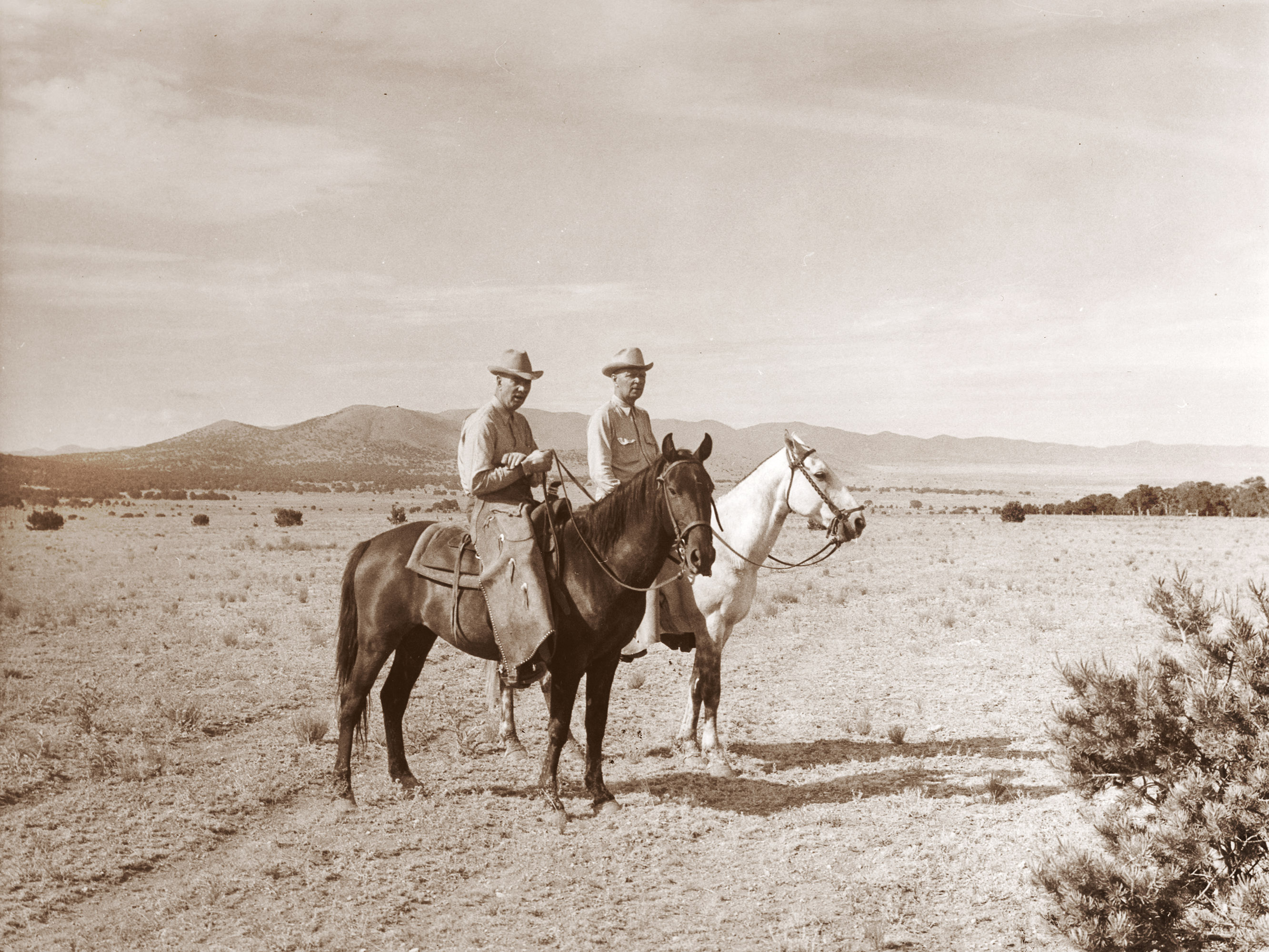 Ralph Hall (left) and Roger Sherman (right) as mobile missionaries. Photograph by Frederick R. Thorne for the PCUSA Board of National Missions, 1946.

“…To a great many people, ‘Go ye into all the world’ means only going to China, Japan, Africa, or to some distant place across the sea; but to the Sunday school missionary it means going into the most isolated and neglected parts of his field…It often means dim and rugged trails over the mountains or across the parched sands of the desert. It means visiting that lonely and isolated home or community, for the Sunday school missionary must ever be primarily a trailblazer, a pioneer in the work of the Kingdom…” —Ralph J. Hall, in The Main Trail, 1973

When cowboy missionary Ralph J. Hall arrived in a new town, his first task was figuring out how to earn the respect of the cowboys and ranchers who lived there. Many of them “had a scowl rather than a welcome for the preacher when he came around,” so Hall was careful not to let on that he was a minister until the men accepted and trusted him as a real cowboy. When Hall offered to give them a hand, they always made sure to lend him their wildest and most disobedient horse. Fortunately, Ralph Hall was a cowboy by birth, raised on a cattle ranch in the western plains of Texas. Even when he was being bucked off his horse, he would continue to ride it all day and night until it was tame. It didn’t hurt that he could “rope a steer in near record time” and “read trail signs like an Indian.” When he did open up to the cowboys about his faith, it was always beside a roaring fire under the stars, and by then, even the toughest and most skeptical of the men would listen to him.

Ralph Hall appealed to America’s fascination with all things cowboy and Western. After the story of Hall’s missionary work with the cowboys and ranch families of the Southwest made its way to churches back East, curious Presbyterians wanted a taste of the authentic cowboy experience. Those who were able to hitch a ride with the legendary cowboy did not expect the many difficulties inherent in Hall's work. The mythology of cowboy life does not typically take into account the physical exertion required to sustain 18-hour work days, roping and tending to cattle, and riding endlessly long and oftentimes treacherous trails through erratic weather conditions. Hall’s nearly fifty-year career as a Sunday school minister and mobile missionary in the Southwest was often spent riding alone through the unpaved, treacherous, and sparsely settled Texas and New Mexico landscape, covering hundreds of miles before ever reaching any town. He slept more nights outside in his bedroll than he did under a roof—and he preferred it that way. But most of Hall’s Eastern visitors found themselves chucking their over-packed luggage off the side of their horse and leaving their bedrolls to seek shelter from the brutally cold desert nights.

By 1940, Ralph Hall was supervising all Sunday school missionary work west of the Mississippi River, traveling hundreds of miles to remote ranches to perform baptisms, marriages, and communion services. He brought church to the doorsteps of pioneering families who had settled hundreds of miles away from the nearest town. In 1939, Ralph Hall and Roger Sherman developed the camp meeting idea, based on the Bloys Camp Meeting held in the Davis Mountains of Texas since 1890, in order to find a better way to bring remote, churchless communities together for worship. Though they relied only on word of mouth, hundreds of families traveled over 200 miles to attend the event, which featured guest preachers, Bible study, prayer, and meals cooked over a fire. The first Ranchman’s Camp Meeting  was founded in Nogal Mesa—a beautiful high pine mountain site near Carrizozo, New Mexico—and continues to meet there annually.

Not surprisingly, Hall’s work became the subject of numerous films supported by the Presbyterian Board of National Missions. Between the 1920s and the 1950s, the Board sent the Reverend Frederick Thorne to film The Vanishing Frontier, followed by Cowboys Hitching Post, Altars of God, and the short film featured below, Little Cowboy Americans, depicting Hall and lifelong friend, Roger B. Sherman’s work as Sunday school ministers in New Mexico.