Rubber Crimes: Sheppard and Morrison Versus the Kasai Rubber Company 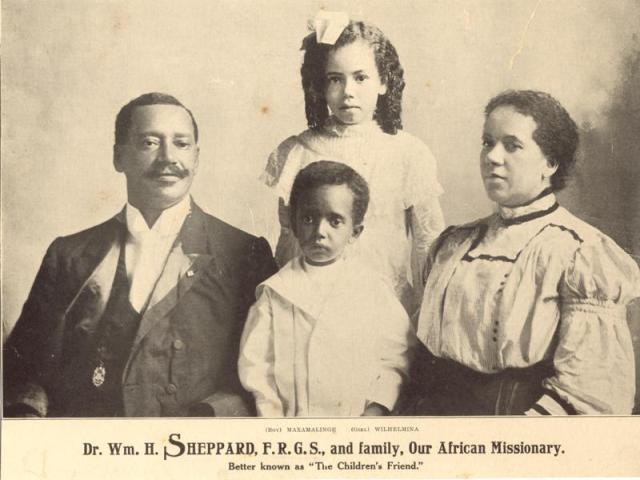 The Berlin Conference of 1884-1885, was to impact the Congolese region of Africa irrevocably. Major European imperialist powers, including France, Portugal, England, and Belgium, had laid claim to Congolese land and resources in the larger context of the “Scramble for Africa” during the height of the colonial period. The General Berlin Act of February 1885, led to King Leopold II of Belgium taking personal control of the Congo, provided that Belgium assume responsibility for the “protection of the natives” and “help in suppressing slavery.”

It is notable that no Africans were present at the conference that was to have such an impact on their fate. In 1890, an African-American Presbyterian minister, William H. Sheppard, was appointed by the Executive Committee of Foreign Missions of the (Southern stream) Presbyterian Church in the United States (PCUS) to serve as a missionary in the Congo Free State. This was the first American Presbyterian mission venture into the country. Sheppard, one of the earliest African-American foreign missionaries for the PCUS, and Samuel N. Lapsley, a white minister from Anniston, Alabama, established the first mission station at Luebo in Kasai province.

Enlarging the early church at Luebo 1895. Sheppard with another missionary and young people. Sheppard is holding a saw.

Sheppard and Lapsley set to work learning the local language, building mission churches, administering Sunday school, and venturing to remote regions. It was several years until they had their first convert, but they befriended many of the local people and gained their trust. The missionaries would later establish another station at Ibanche. After the sudden fever-related death of Samuel Lapsley in 1892, William Sheppard carried on alone until additional missionaries arrived in 1893 and in 1896. William M. Morrison’s arrival in 1897 proved to be crucial to the success of the American Presbyterian Congo Mission. Morrison formalized Tshiluba language study, organized new educational programs, and expanded evangelistic work.

Meanwhile, Belgians had established commercial ventures in the Congo. Beginning in the 1890s, King Leopold received growing international criticism for his treatment of the indigenous people. State-sponsored soldiers committed atrocities against the Congolese, and colonial rubber companies used forced indigenous labor to harvest rubber. Rubber was plentiful in the Kasai region where some of the American Presbyterians were stationed.

Morrison took the lead in speaking out against human rights abuses perpetrated by the Belgians under King Leopold’s absolutist rule. Photographs in the William Sheppard papers, held at the Presbyterian Historical Society, document some of these crimes. Sheppard noted in his reports that the crimes violated the 1885 General Berlin Act. In the United States, Presbyterians helped to lead the public outcry against Leopold.

Morrison and Sheppard used their mission newsletters report crimes they witnessed. Their accounts were published on a printing press at the mission and distributed through Presbyterian networks. The missionaries also reported crimes to Roger David Casement, an Irish patriot, poet, revolutionary, and nationalist, who was instrumental in establishing one of the world’s first humanitarian organizations, the Congolese Reform Association (CRA).

Some Swedes and other Europeans in the region also spoke out against the crimes of Leopold’s rule, and the press in Europe and America helped expose the situation. Joseph Conrad’s Heart of Darkness describes a trip down a river in Africa, which some presume to be the Congo River during this troubled period, since the date of publication (1903) and the events of the novel coincided with the political and humanitarian situation in the Congo Free State.

Morrison (left) and Sheppard (right) with their witnesses in the Kasai Rubber trial (William Sheppard Papers).

One critical report that William Sheppard published in the American Presbyterian Congo Mission (APCM) newsletter in January 1908 led to Sheppard and Morrison being sued for libel by the Kasai Rubber Company, a Belgian rubber contractor in the area. Later that year, public pressure and diplomatic maneuvers led to the end of King Leopold II’s rule, and the Belgian Parliament formally annexed the Congo as a colony, known as the Belgian Congo. The Kasai libel case went to court in September 1909, and the two missionaries were acquitted. Morrison’s case was dismissed on a technicality. Sheppard stood trial and called many indigenous Congolese men, who were his personal friends, as witnesses. He was acquitted on the basis that he had spoken out against many smaller subsidiary rubber companies and had not libeled the Kasai Rubber Company.

There is reason to believe that the acquittals were partly political. By the time the two were brought to trial in 1909, the United States and Europe had successfully challenged Leopold’s legitimacy in the Congo Free State, and the missionaries also had support from the CRA and the Congolese resistance movements. Other public figures, including Mark Twain, Arthur Conan Doyle, Joseph Conrad, Booker T. Washington, and Bertrand Russell, had done much to draw international attention to the crimes in the years leading up to 1909, and public opinion was with the missionaries. Sheppard’s lawyer, who successfully argued his case, was Emile Vandervelde, a prominent Belgian statesman.

Chief Njoka, one of Sheppard's principal witnesses at the trial at Leopoldville.

It is admirable that Morrison and Sheppard took a stand against the injustice they encountered, even though it frequently put them in harm’s way. The missionaries’ reports, culminating with the international coverage of their 1909 trial, helped lead to reform and the annexation of Congo by Belgium. This was only after King Leopold II had finally given up any hope of maintaining a large part of the Congo Free State as separate crown property. Sheppard resigned from the Congo mission after the trial in 1909 and returned to the United States. Morrison and many multi-generational families of Presbyterian missionaries continued the work there throughout the twentieth century. Their labors are documented in the Society’s holdings.