The Unlikely Designer of Philadelphia's Flag 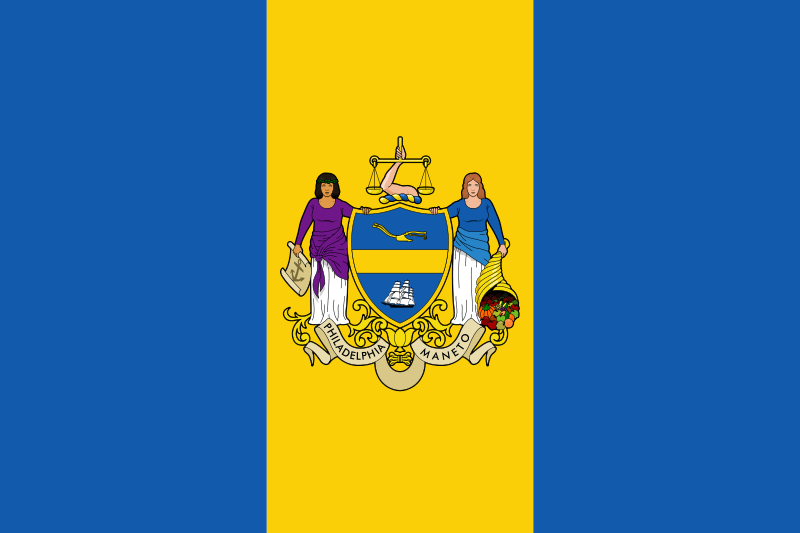 Last month, we were contacted by a Philadelphia high school teacher researching the story behind the city of Philadelphia flag. For those of you who cannot easily visualize the flag’s design, it consists of three equal vertical bands of blue, gold, and blue. Emblazoned across the center is the city’s coat-of-arms: a shield flanked by two robed female figures, an arm holding a pair of scales at the crest, and a banner across the bottom inscribed with the motto “Philadelphia Maneto” (i.e., may brotherly love endure).

The colors are meant to evoke the city’s Swedish roots (one of Philadelphia’s oldest sections—Southwark—was settled by Swedes in 1643); the motto is taken from Hebrews 13:1, and refers to words supposedly spoken by William Penn, Pennsylvania’s founder. The teacher’s question may seem a curious one to pose to the Presbyterian Historical Society; however the flag’s designer was none other than the Reverend Henry Christopher McCook (1837-1911), former president of the Society (1898-1911), founding editor of The Journal of Presbyterian History, and longtime pastor of Tabernacle Presbyterian Church in West Philadelphia.

Rev. Henry McCook in his study

As any devoted readers of our newsletter, Journal, blog, or Facebook page can attest, we have devoted much of this year to highlighting Rev. McCook’s extraordinary accomplishments. A true Renaissance man, he earned distinctions as a naturalist, historian, hymnologist, designer of seals, novelist, and chaplain in the American Civil War.

We are happy for this opportunity to draw attention to yet another of his remarkable achievements. In searching our holdings to aid the teacher in his research, we found a letter from Philadelphia Mayor Edwin S. Stuart (1853-1937) addressed to Rev. Henry C. McCook. The letter, bearing the Mayor's official seal, announces the approval of  an ordinance establishing the design and colors of the city of Philadelphia flag, as proposed by Rev. McCook. Notice that the letter is accompanied by a pen used to sign the ordinance.