“I therefore offer myself as a volunteer to the service of my country and my God, in the capacity of Chaplain to the troops under your command.”

So wrote Alexander M. Stewart (1814-1875), pastor of the Second Reformed Presbyterian Church in Pittsburgh, in 1861, exemplifying the reaction of many Presbyterian clergy to the crisis of the Civil War. Chaplains to both Union and Confederate soldiers provided spiritual support and comfort by serving within various divisions of the military as well as in field hospitals. They held prayer meetings, religious services, Bible classes, and performed last rites. On the front lines, chaplains provided spiritual and emotional counseling and aid for the wounded, and in field hospitals they often assisted wounded soldiers with letter-writing to family and friends in addition to their religious duties.

With no official policies governing the duties and responsibilities of chaplains, Union chaplains deferred to William Young Brown’s The Army Chaplain, while Confederate chaplains relied on James O. Andrew’s Letter to the Chaplains in the Army as a guide. 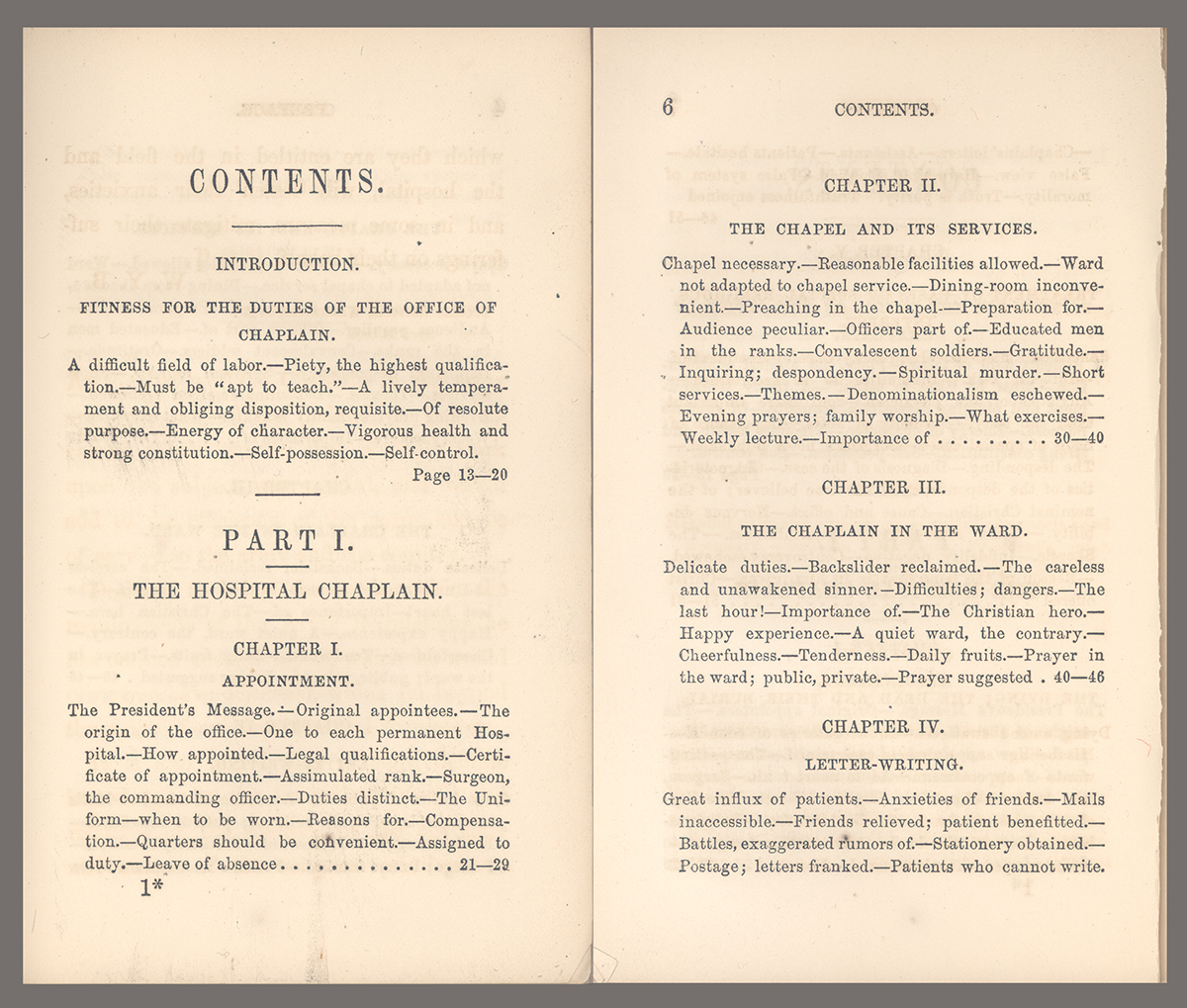 W.Y. Brown, The Army Chaplain: His Office, Duties, and Responsibilities, and the Means of Aiding Him. (Philadelphia: William S. & Alfred Martien, 1863).

John W. Alvord (1807-1880) attended Lane Theological Seminary in Cincinnati and was ordained by the Congregational Church in 1836. In addition to serving as a chaplain to the Union Army during the Civil War, he held the office of secretary of the American Tract Society from 1854 to 1866. The American Tract Society, founded to promote Christian beliefs and values through the publication and distribution of religious tracts, featured the work of Rev. Alvord in this 1863 broadsheet to educate the public about the important role of the chaplain in the war effort. 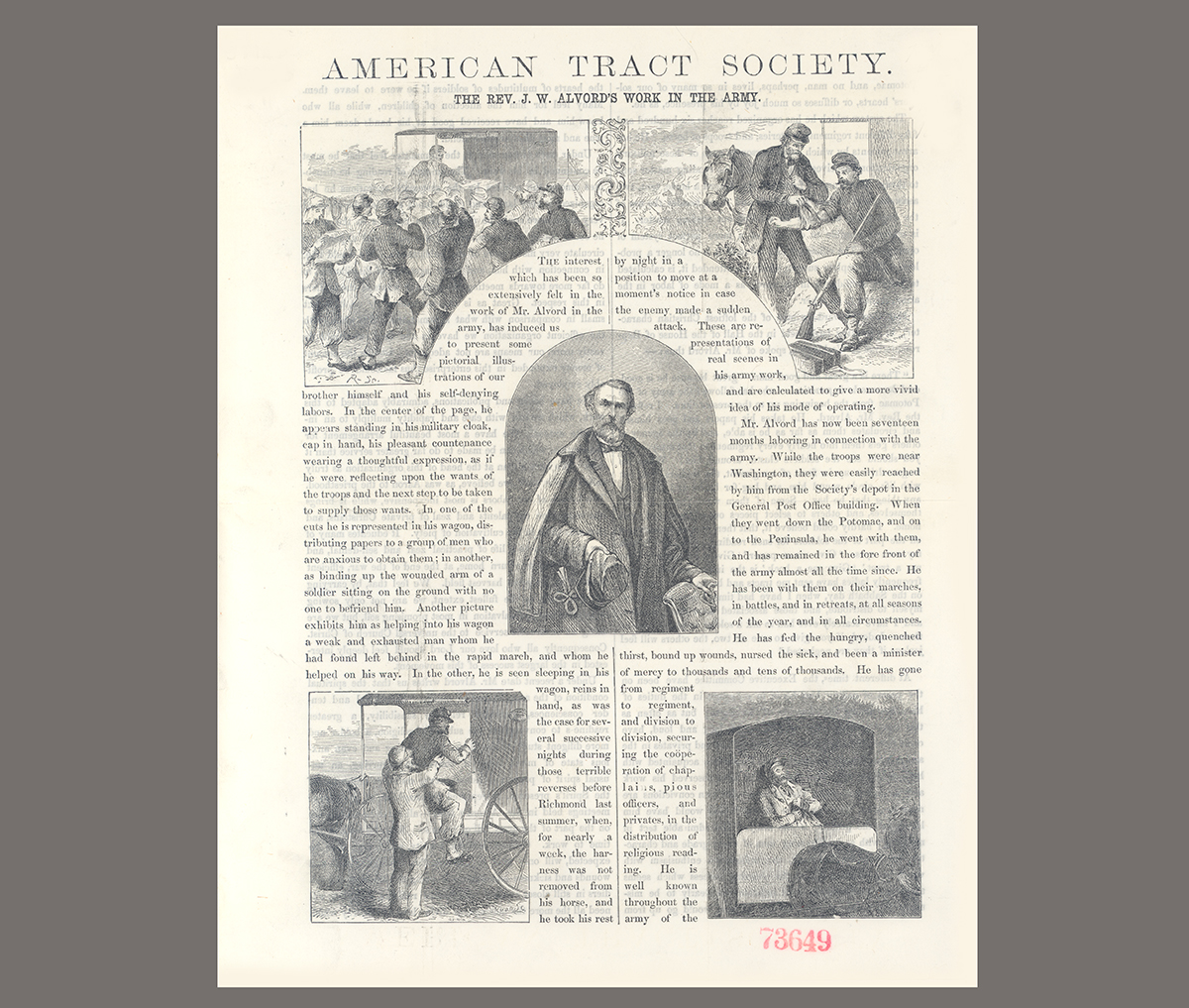 In 1861, Texas evangelist Rev. Robert F. Bunting (1828 -1891) served as a commissioner to the organizing General Assembly of the Presbyterian Church in the Confederate States of America. That same year, he entered military service as chaplain to the celebrated “Terry’s Texas Rangers” – the Eighth Texas Cavalry. For four years, he cared for the spiritual and bodily needs of his men while also serving as a war correspondent for several Texas newspapers and running a hospital for Confederate soldiers in Alabama. Serving congregations in Texas, Georgia, and Tennessee, his ministry spanned nearly forty years. 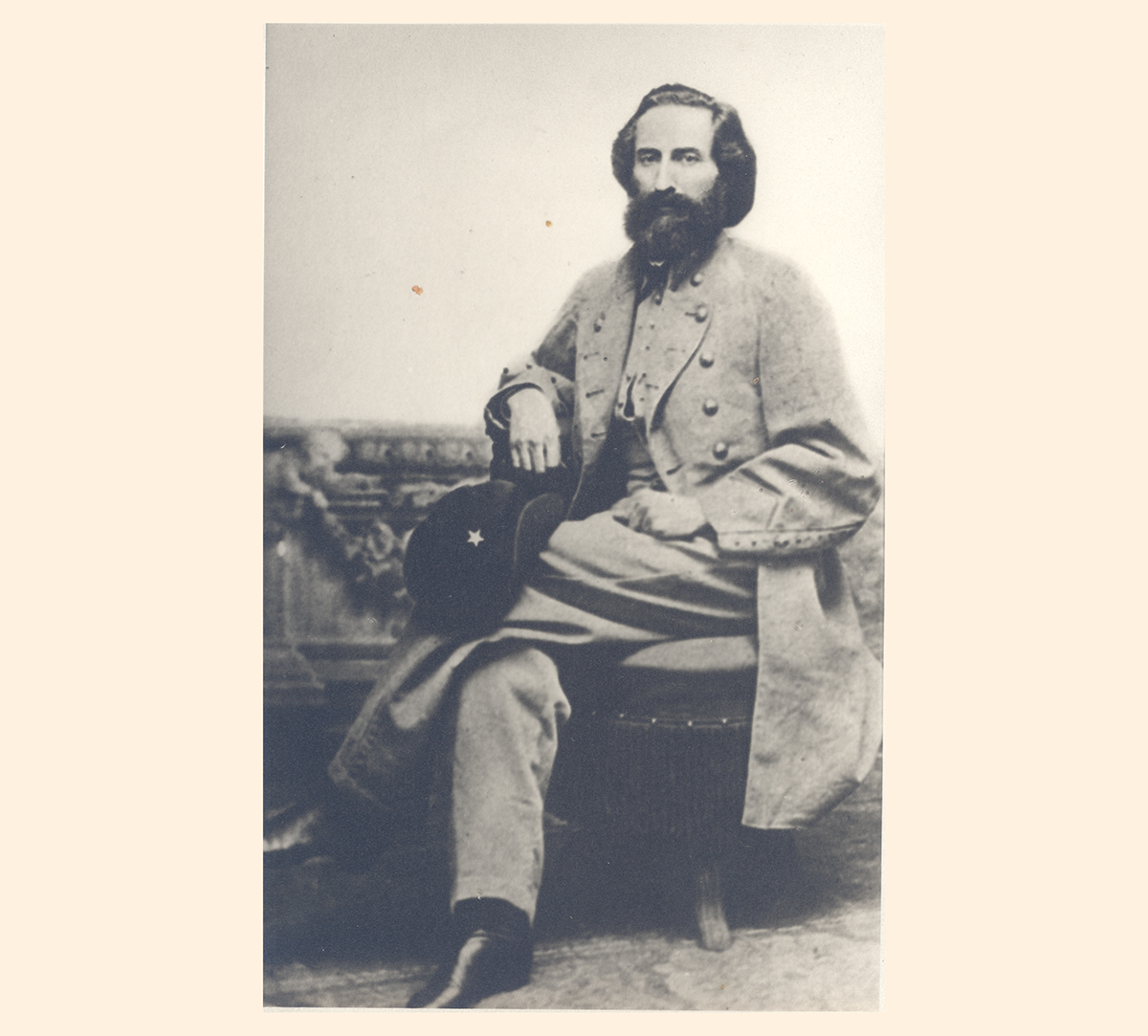 Rev. Benjamin W. Chidlaw (1811-1892) was a prominent Presbyterian Sunday School worker who became a Union chaplain for the Thirty-ninth Ohio Infantry at Camp Dennison in 1861. He spent less than a year as chaplain due to ill health, but he wrote fondly of his experiences in his autobiography, The Story of My Life. One of Chidlaw’s most remarkable memories as chaplain was his Thanksgiving sermon, delivered at Camp Todd Macon, Missouri, on November 28, 1861, about which he wrote:

“…This solemn occasion, standing in such a presence, our national life imperilled [sic], our country in the throes of a gigantic rebellion, and the horrors of war staring us in the face, made the delivery of my discourse the most trying and important effort in my life and experience…” 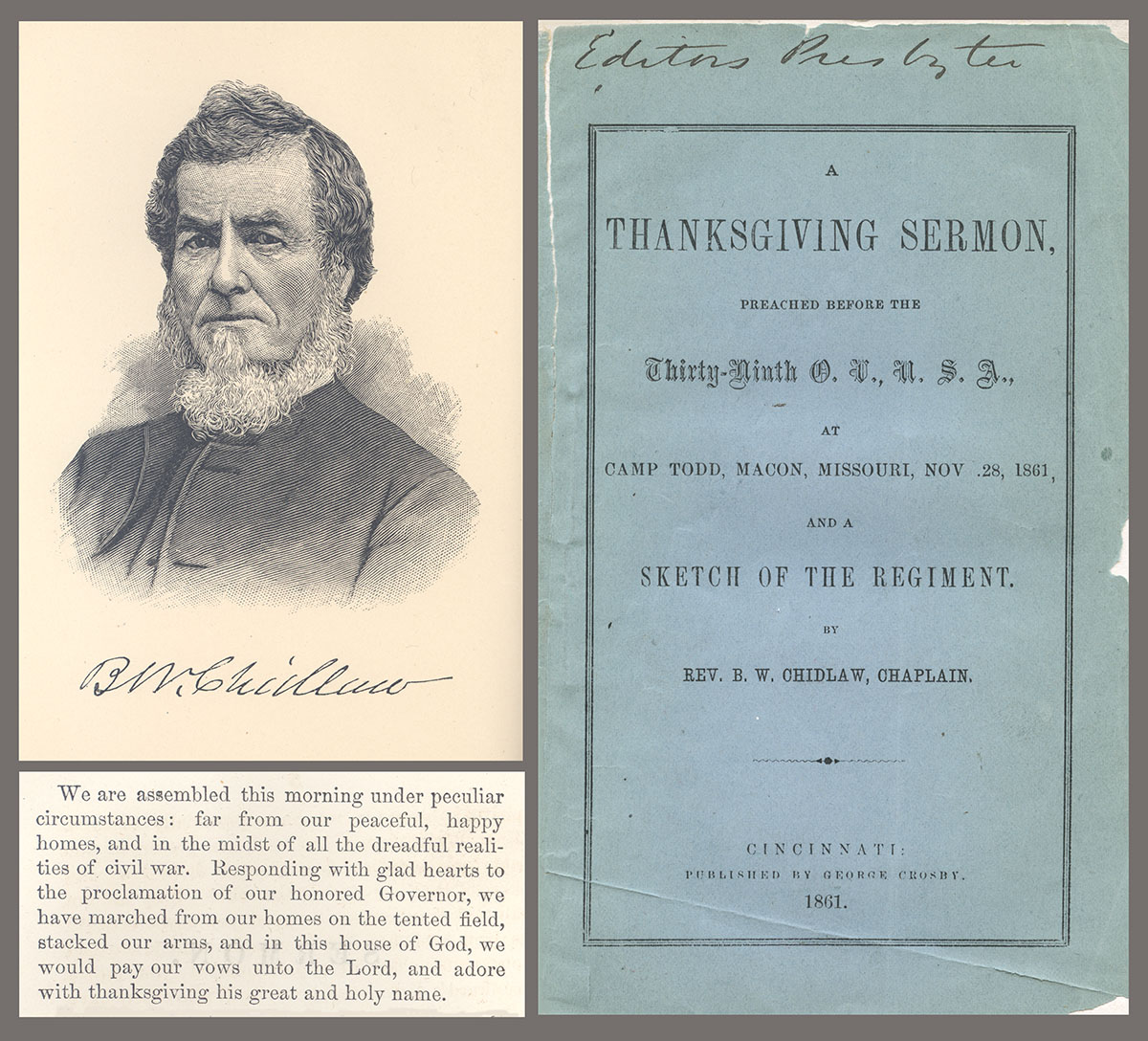 Cover and excerpt from B. W. Chidlaw, A Thanksgiving Sermon, Preached Before the Thirty-Ninth O. V. U. S. A., and a Sketch of the Regiment. (Cincinnati: George Crosby, 1861). View full image.

An outspoken and active supporter of Southern rights and institutions, Dr. Robert Lewis Dabney (1820-1898), professor at Union Theological Seminary, Richmond, Virginia, began his involvement in the war in 1861 as a Confederate chaplain to the Eighteenth Virginia Volunteers. Called an “Ironside Presbyterian parson,” his abilities as a chaplain drew the attention of General Thomas J. “Stonewall” Jackson, who recruited him in April 1862 to serve as his Chief-of-Staff, a combatant position he held for six months before suffering exhaustion. Dabney penned the first published biography of General Jackson at the request of Jackson’s widow.

“…The signal of divine worship is the rattle of the drum, the soldier’s substitute for the bell, and they come from every side to the meeting-place,…rough-bearded men, bronzed and weather-beaten… Then follows the sermon, short and informal, but swallowed with solemn and eager faces. It is evident that many hearts are busy with thoughts of home… Not a few tears are wiped from those bronzed and bearded faces; but they are not unmanly tears; our enemies will find…that the love for homes and households…will make every one of these men as a lion in the day of battle…” 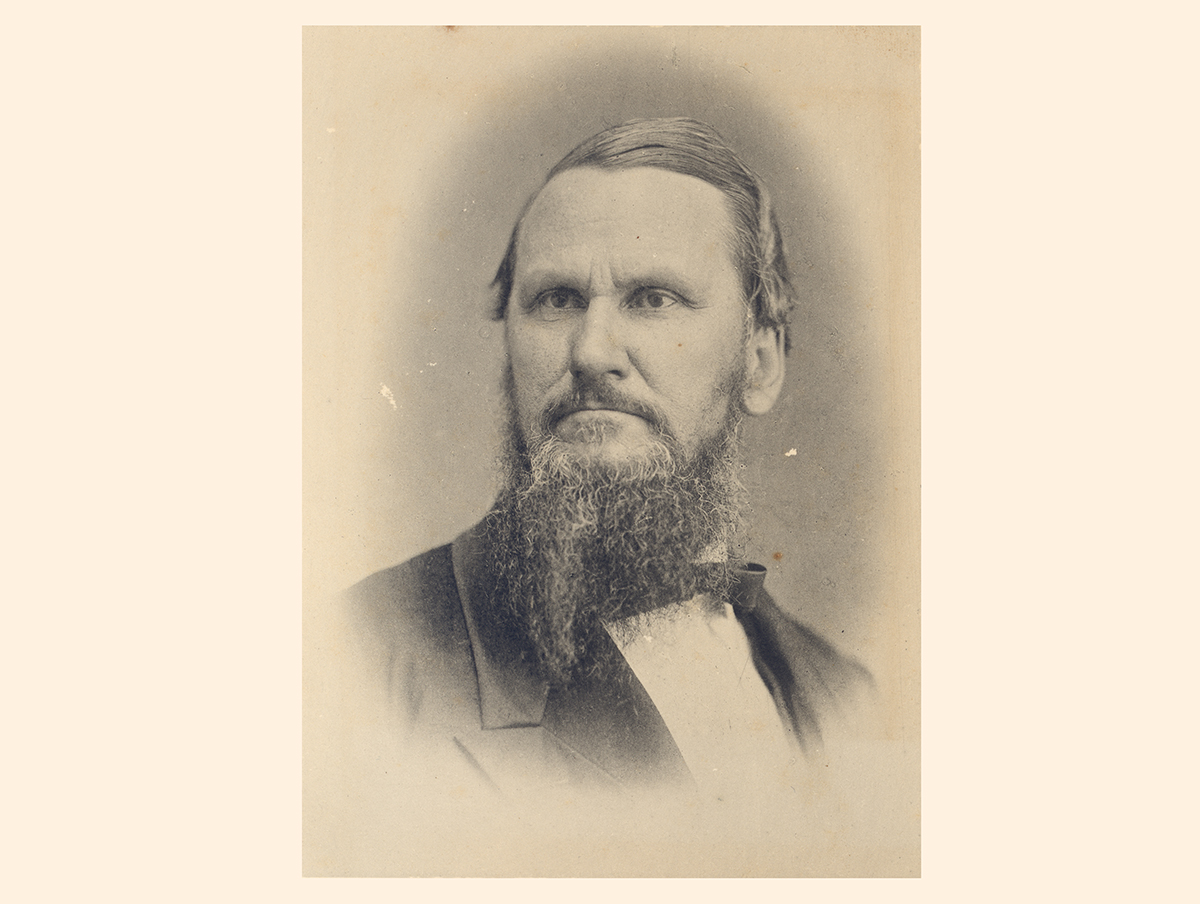 Rev. Isaac W. Handy (1815-1878) served congregations in Delaware, Missouri, Maryland, and Virginia. During the Civil War, the Union Army detained him at Fort Delaware for fifteen months for refusing to deny allegations that he made statements against the American flag. While at Fort Delaware, he preached every day and conducted Bible classes, contributing to the conversion of over seventy Confederate officers. The photograph here shows Rev. Handy (to the far left) preaching to fellow prisoners around 1863. 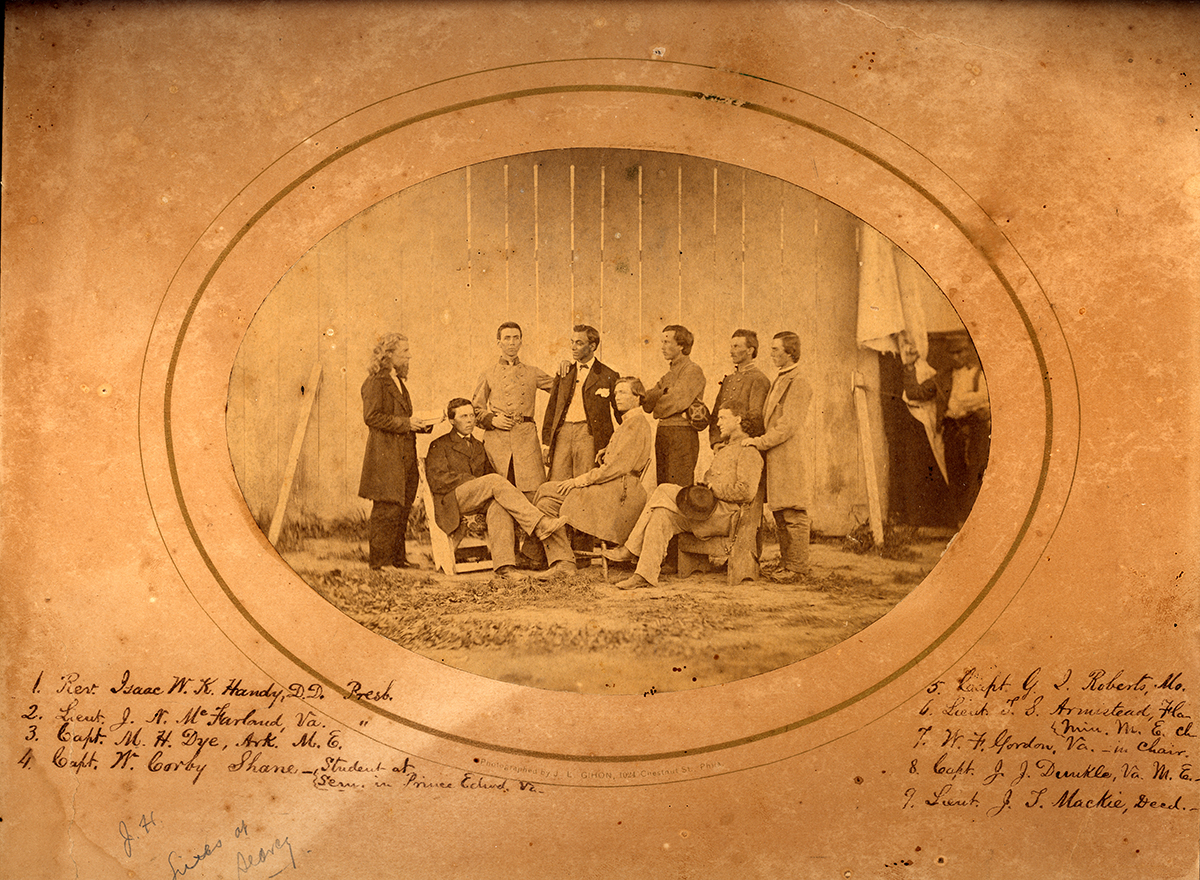 Rev. Handy led worship at Fort Delaware by singing a popular hymn of the time, "A Charge to Keep I Have." View full image. 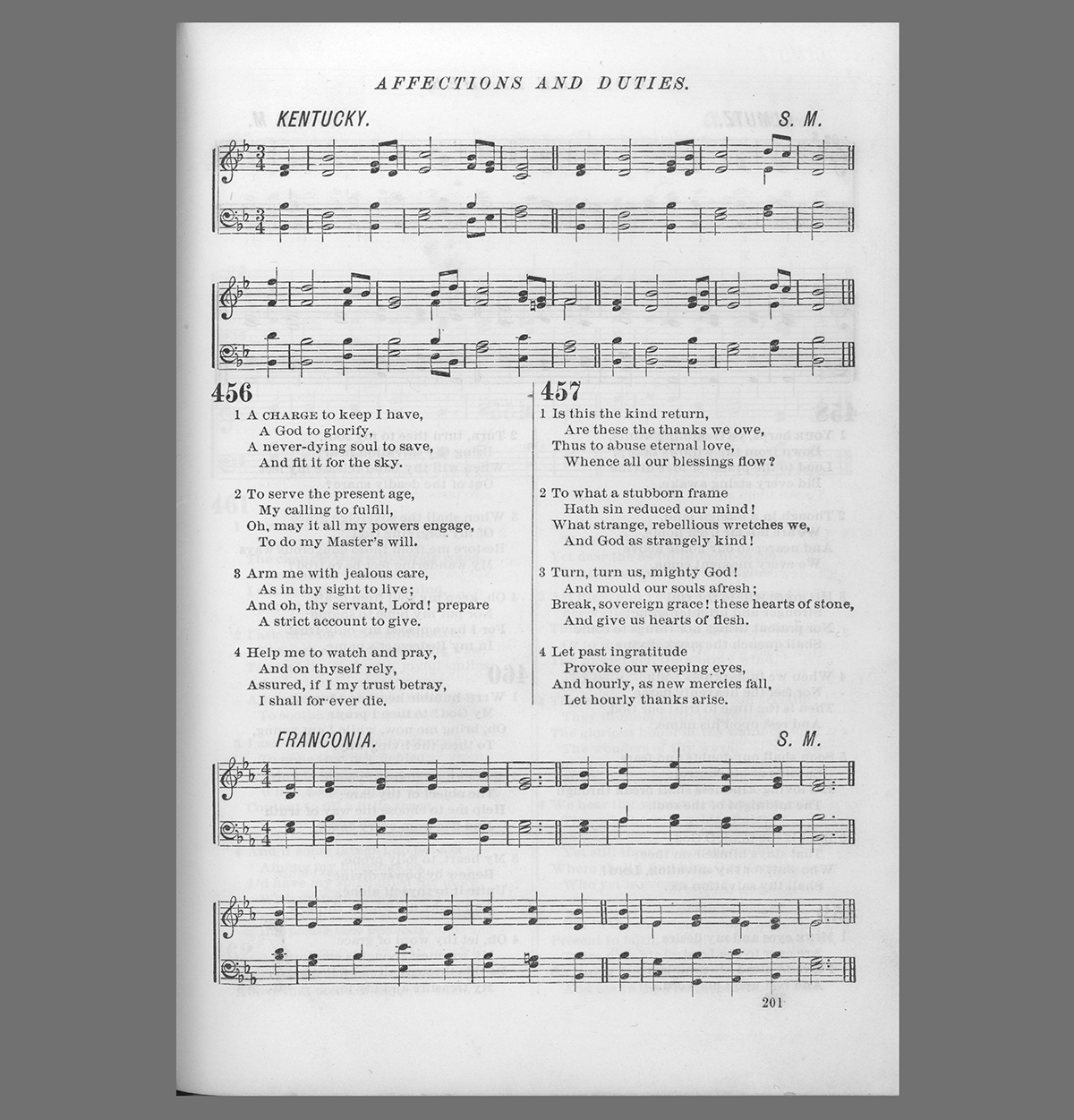 Born in Philadelphia to Baptist parents, Robert W. Landis (1809-1883) joined the Presbyterian Church at age twenty and was ordained in 1832. During the Civil War, Rev. Landis served three and a half years in the Union Army as a chaplain to a cavalry regiment. He kept a diary and recorded on the Sabbath, June 8, 1862:

“…I ought to have stated that besides the regimental service which is at 3 o’clock, I have services at the Hospital in the morning at 11. And in addition I have a Bible Class and prayer meeting appointed at my tent through the week…”

From 1868 to 1869, he occupied Dr. Robert J. Breckinridge’s chair at the Presbyterian Theological Seminary at Danville, Kentucky, and later served as a professor at the seminary. 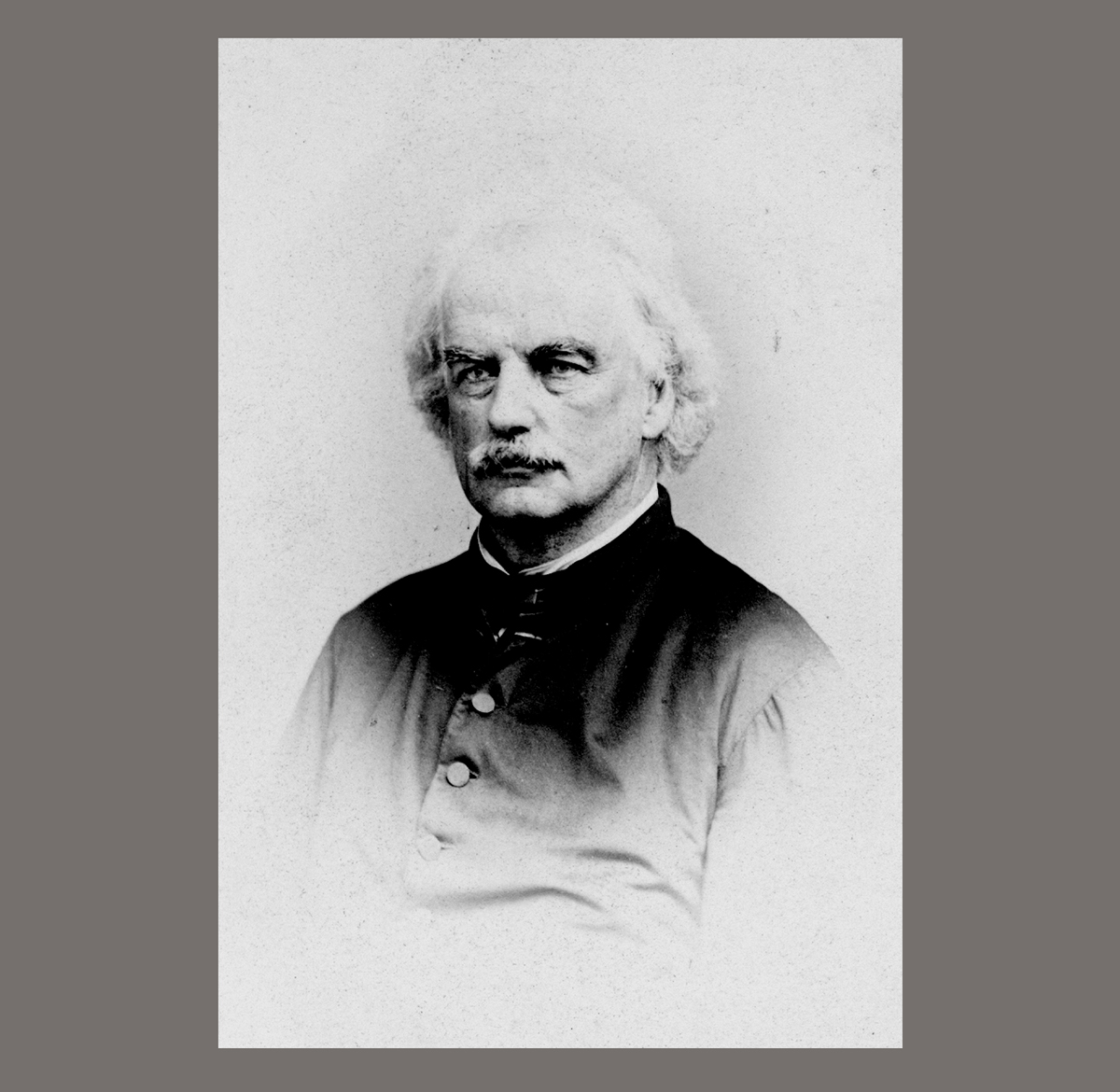