Throughout the war Presbyterian men and women worked to provide physical, emotional, and educational support to soldiers and freedmen. Both at home and on the front lines, they collected and distributed supplies, provided medical assistance, and offered spiritual guidance, education, and religious tracts. They joined in the efforts of their presbyteries and congregations, various agencies, including the United States Christian Commission (USCC) and the United States Sanitary Commission (USSC), and organized their own soldier’s and ladies’ aid societies. 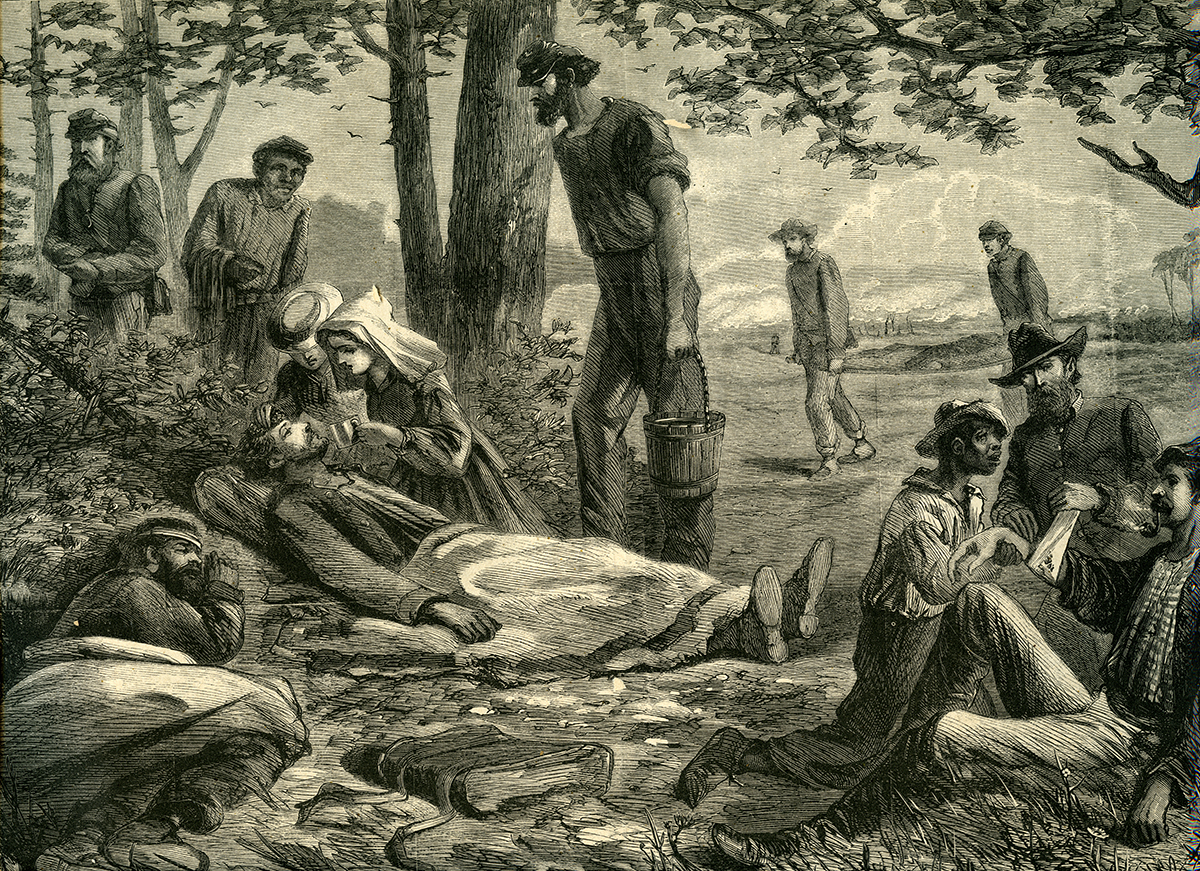 The U.S. Christian Commission, organized during a meeting of the Young Men’s Christian Association (YMCA) in 1861, was created “to promote the spiritual and temporal welfare” of soldiers and sailors of the Union and Confederacy. Its activities included the publication of hymns and prayers, organizing devotional meetings in camps, and aiding and supporting chaplains. 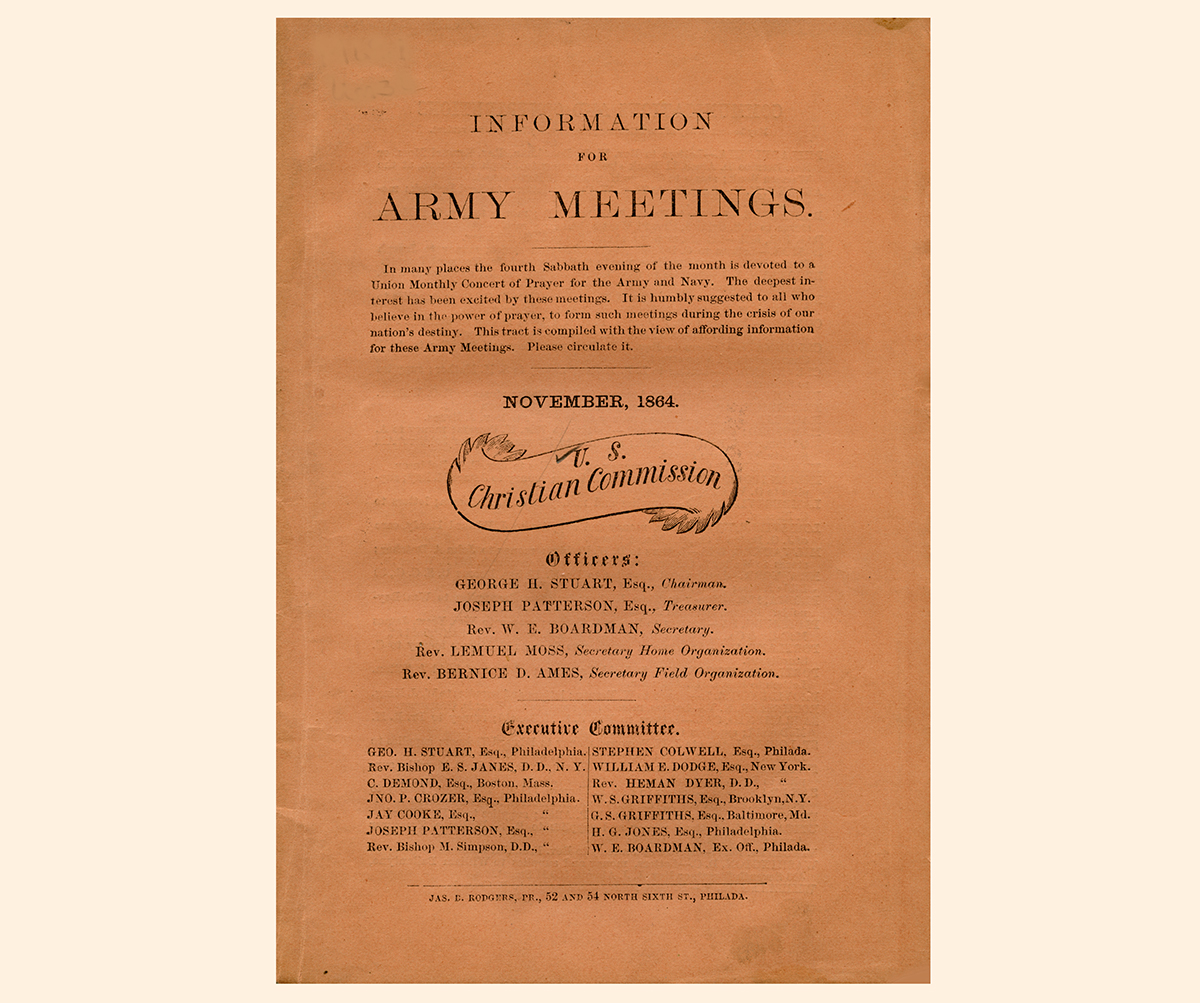 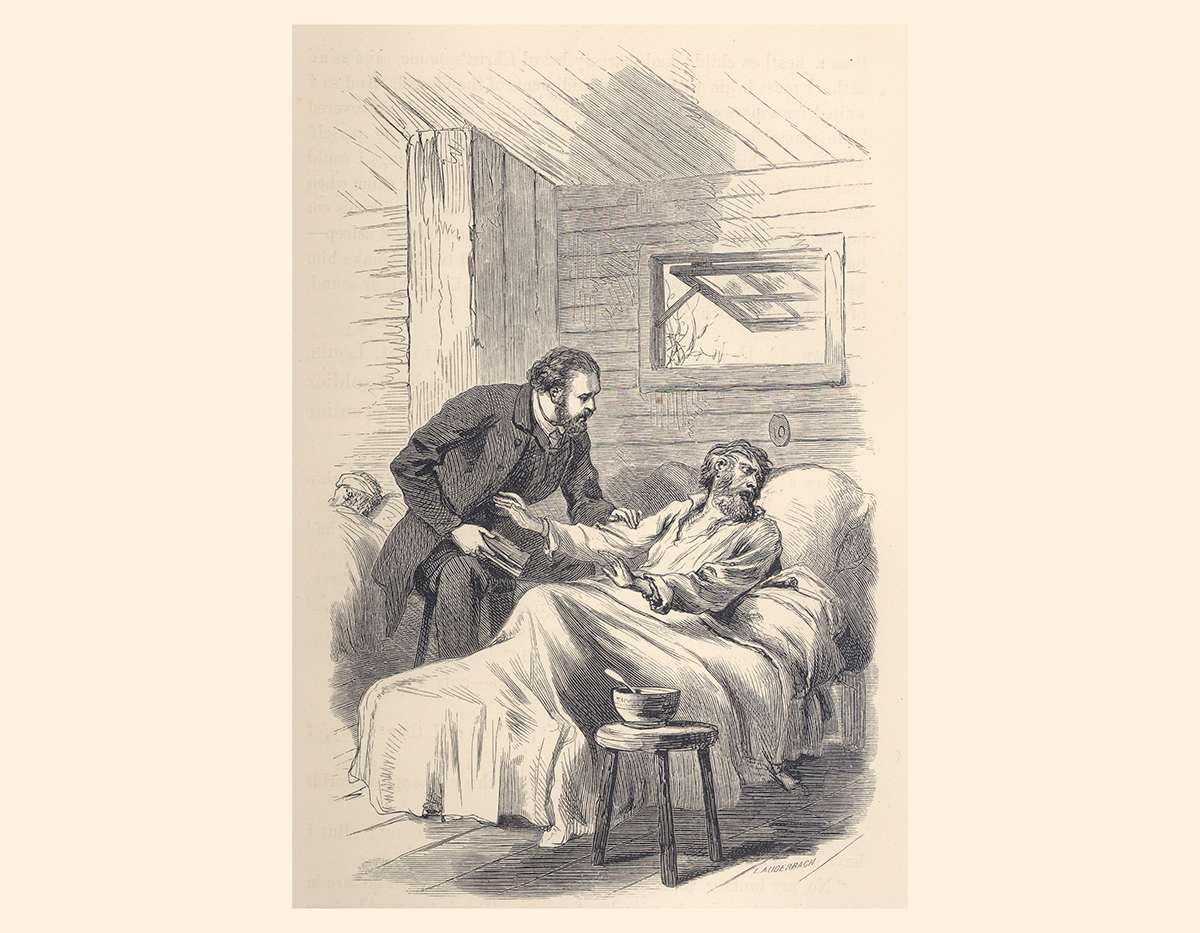 Prolific author and pastor of Presbyterian churches in Pennsylvania and Illinois, Rev. James Russell Miller (1840-1912) served the USCC as a field agent in the Army of the Potomac and Army of the Cumberland. 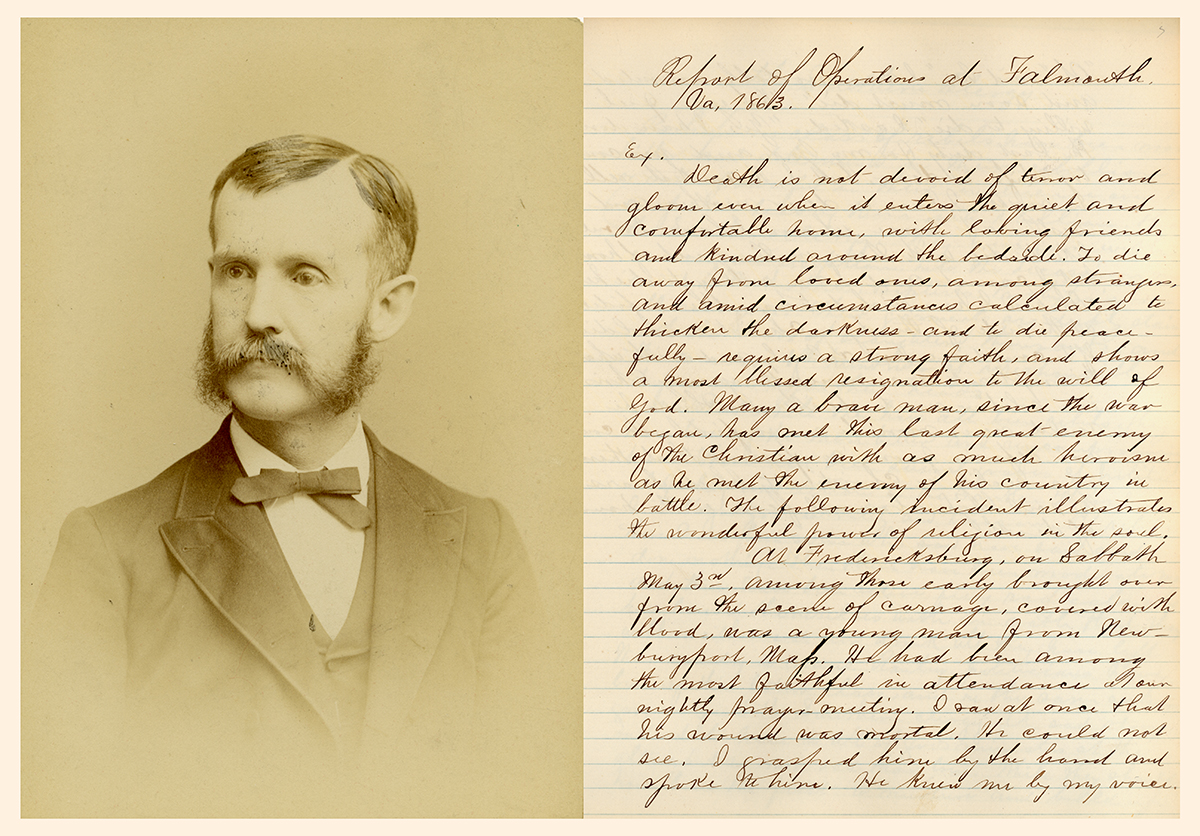 Portrait of J.R. Miller, undated, and the notebook that Miller kept while serving as field agent for the USCC. (J.R. Miller Papers, 1863.) View full image. 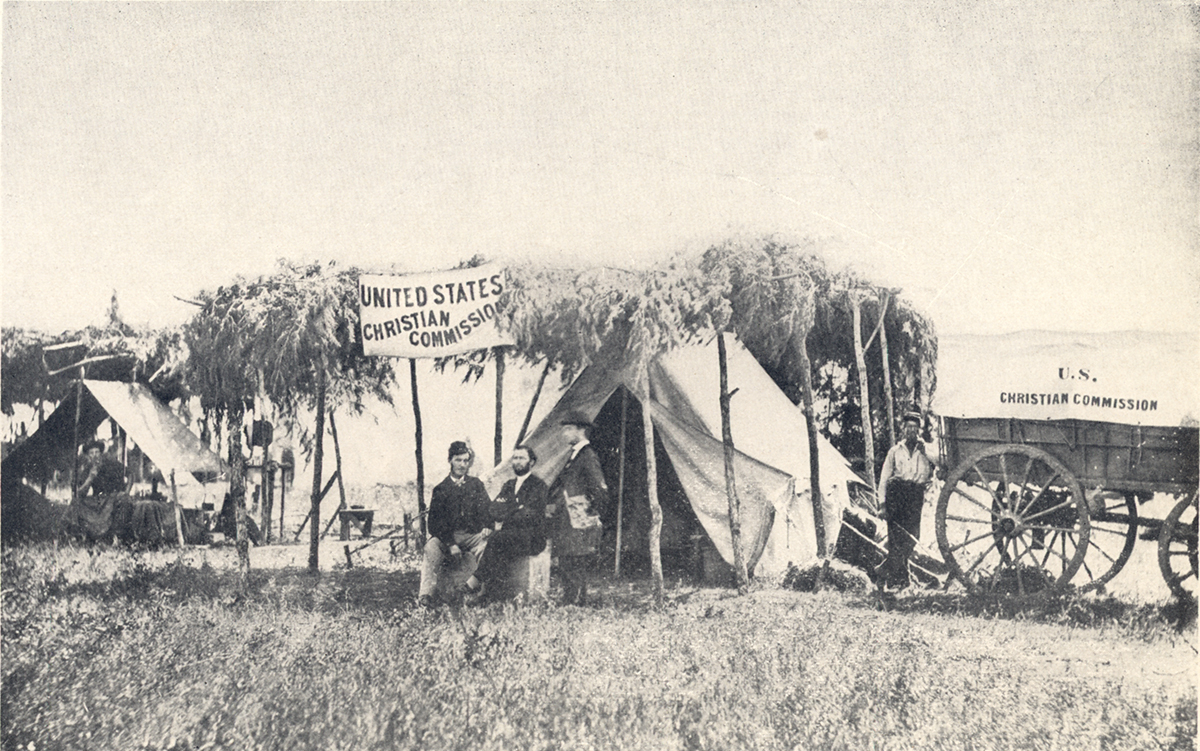 “Headquarters in the field,” ca. 1864. J.R. Miller at USCC headquarters. John T. Faris, The Life of Dr. J.R. Miller: “Jesus and I Are Friends.” (Philadelphia: Presbyterian Board of Publication, 1912). View full image.

George H. Stuart (1816-1890), Philadelphia businessman and elder at the First Reformed Presbyterian Church, was chairman of the USCC and headed the executive committee of the Philadelphia Branch. 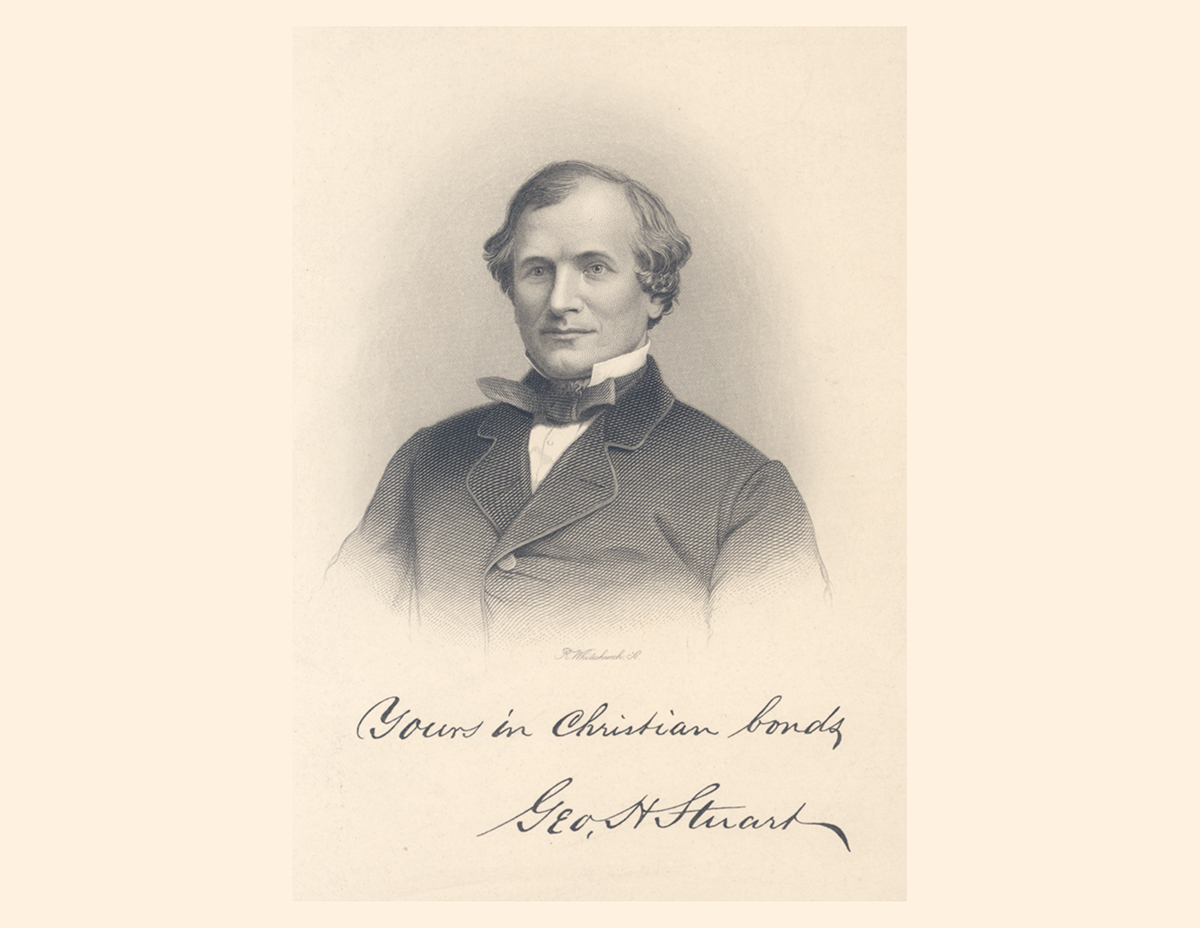 Ladies’ aid societies and soldiers’ aid societies were often organized by women as part of their congregations’ larger efforts to support the troops. Some women participated through local hospitals and community organizations, while others chose to organize independently. In general, younger women who aligned themselves with the Union cause were more willing to travel long distances to assist soldiers directly on the front lines and in hospitals. 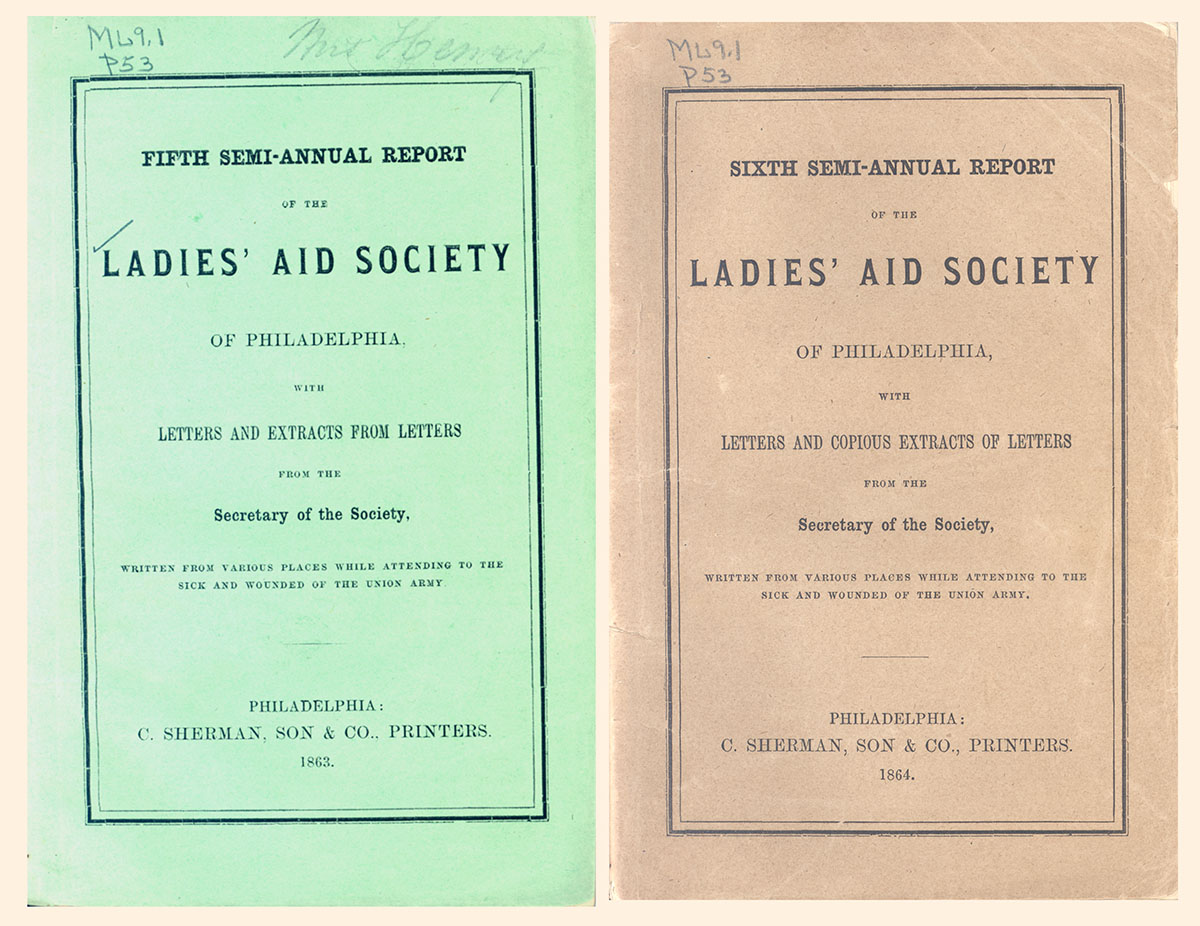 Working independently of the United States Sanitary Commission (USSC) and without denominational affiliation, the Ladies’ Aid Society of Philadelphia (LASP) dedicated itself to providing supplies, medical aid, and emotional and religious support to soldiers. Nicknamed the “Presbyterian Ladies’ Aid Society” because it held meetings and packed supplies in the basement of Tenth Presbyterian Church in Philadelphia, it became one of the most famous and successful women’s charitable groups during the war. Ellen Orbison Harris, secretary of LASP, also worked in conjunction with the USCC as a field correspondent, travelling to hundreds of hospitals to care for Union and Confederate soldiers.

The Ladies’ Aid Society of Philadelphia kept a record of honorably discharged soldiers from 1863 through 1864, listing information such as soldiers’ names, addresses, reason for discharge, and any possible sources of assistance. 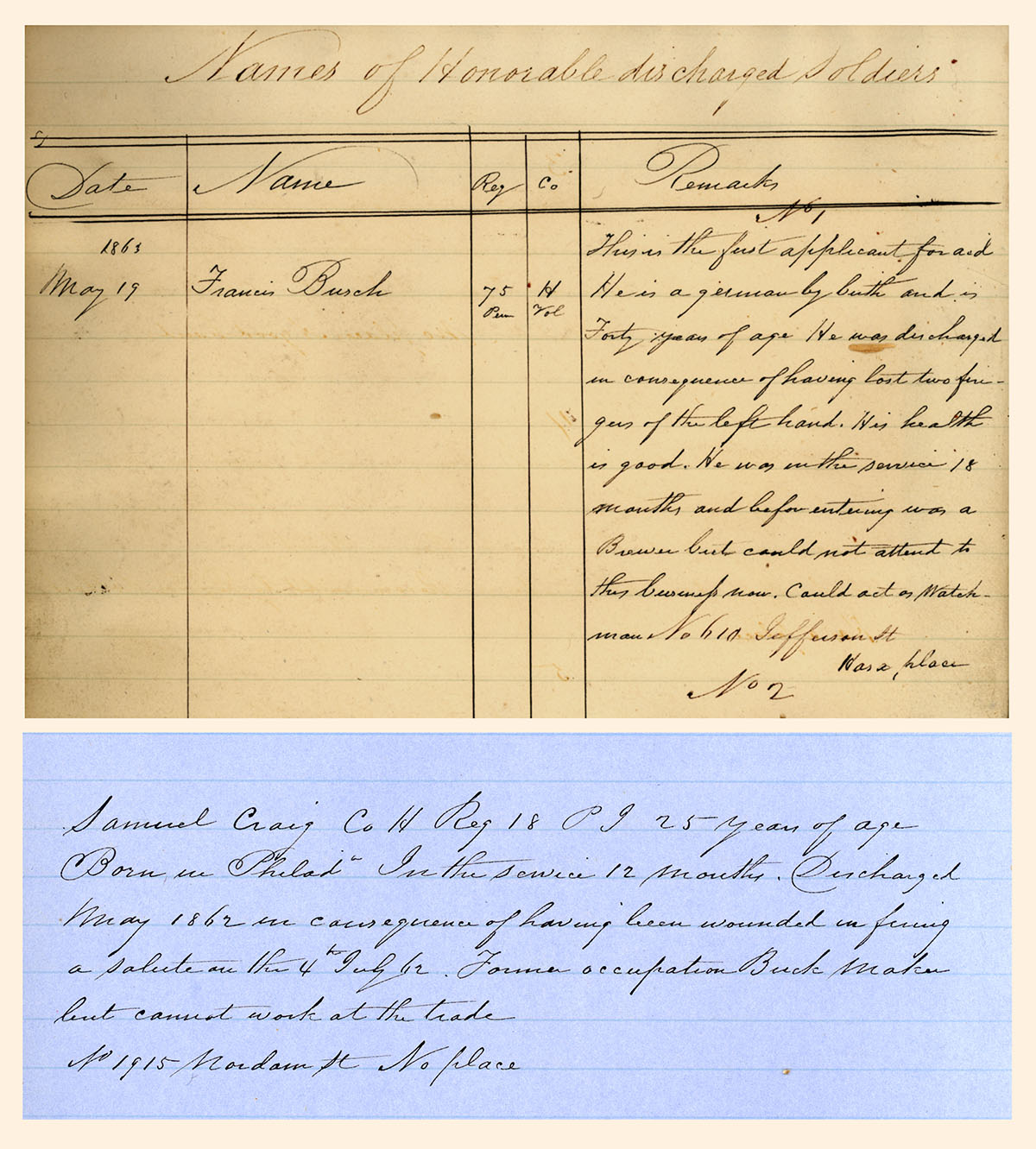