The Presbyterian response to the Revolutionary War was far from monolithic—there were Patriot, Loyalist, and neutral Presbyterians. But the majority of church leaders supported the rebels. Twelve of fifty-six signers of the Declaration of Independence were Presbyterian, including the only clergyman, John Witherspoon. Others supported the war effort as chaplains and soldiers, and from their pulpits and pews.

In the spring of 1775, the Synod of New York and Philadelphia, the national governing body of American Presbyterians, circulated a pastoral letter among its members to prepare them for the war ahead: 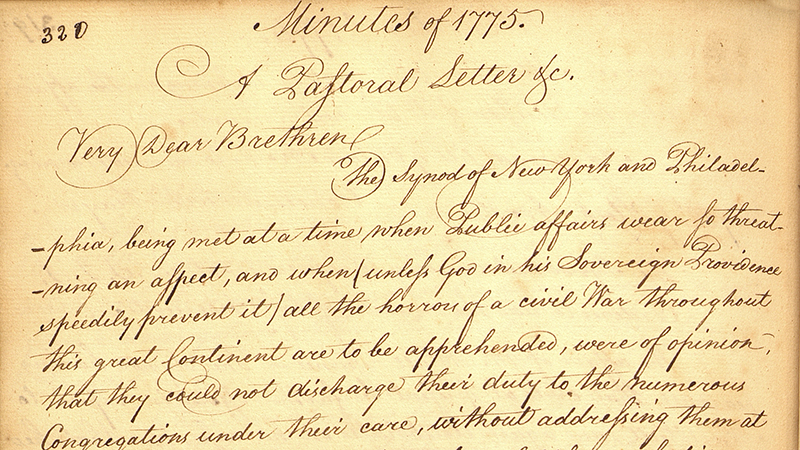 “If…the British Ministry shall continue to inforce their claims by violence, a lasting and bloody contest must be expected.” Counseling fortitude, the letter reminded Presbyterians that, though “it may please God, for a season, to suffer his people to lie under unmerited oppression, yet…we may expect, that those who fear and serve him in sincerity and truth, will be favoured with his countenance and strength.”

Strongly influenced by Witherspoon and the Philadelphia ministers George Duffield and Francis Alison, “radical” ministers such as John Rodgers in New York, David Caldwell in North Carolina, and John Blair Smith in Virginia espoused the principles of individual and national liberty to their congregations. From the pulpit of New York City’s Wall Street Church, Rodgers (1727-1811), a staunch patriot who would later serve as a chaplain during the war, lauded those Continental army volunteers who chose “rather to risk their lives in the cause of liberty, than to resign their privilege and live in slavery.” 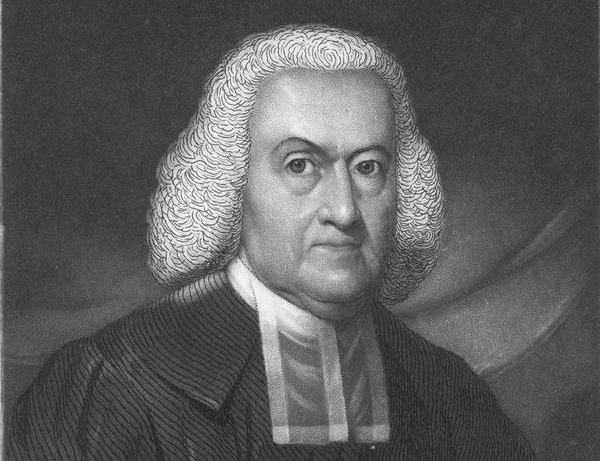 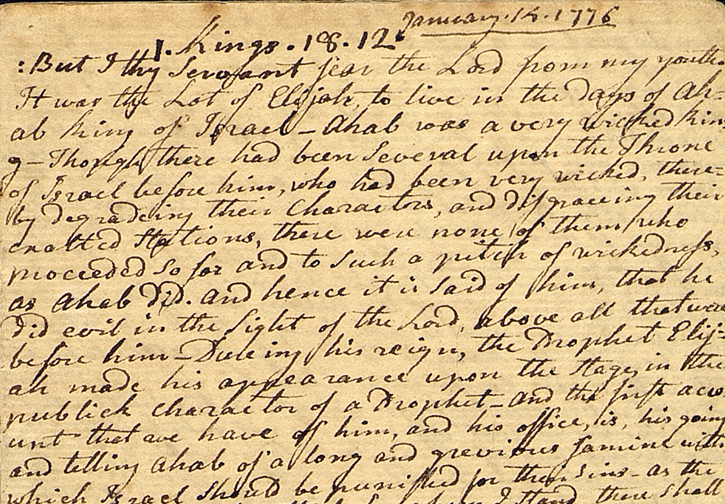 John Rodgers, untitled sermon, January 14, 1776. First Presbyterian Church in the City of New York Records. View full  image.
Exhibit Navigation
Presbyterians and the American Revolution, Page 1
Before: Asserting a Right to Religious Freedom, Page 2
Before: Religious and Political Conflict in the 1760s, Page 3
During: Urging Americans to Arms, Page 4
During: The Fighting Presbyterians, Page 5
During: War Stories, Page 6
During: Difference and Dissent, Page 7
After: Presbyterians Following the War, Page 8
After: Freedom and Equality for All, Page 9
During: Urging Americans to Arms, Page 4
Previous Page
Next Page
Print
New & Noteworthy