Presbyterians from both the North and the South used biblical quotations and theological arguments to justify why they were fighting the Civil War. Scripture also served as a source of strength, inspiration, and consolation for those forced to endure hardships during the war.

Decades before 1861, the Presbyterian church had divided over slavery. In 1838, the Presbyterian Church in the U.S.A. split into the Old School and New School factions partially over the issue of slavery and abolition. Sermons of the time ranged from extolling slavery as a divine right to condemning it as a moral sin. 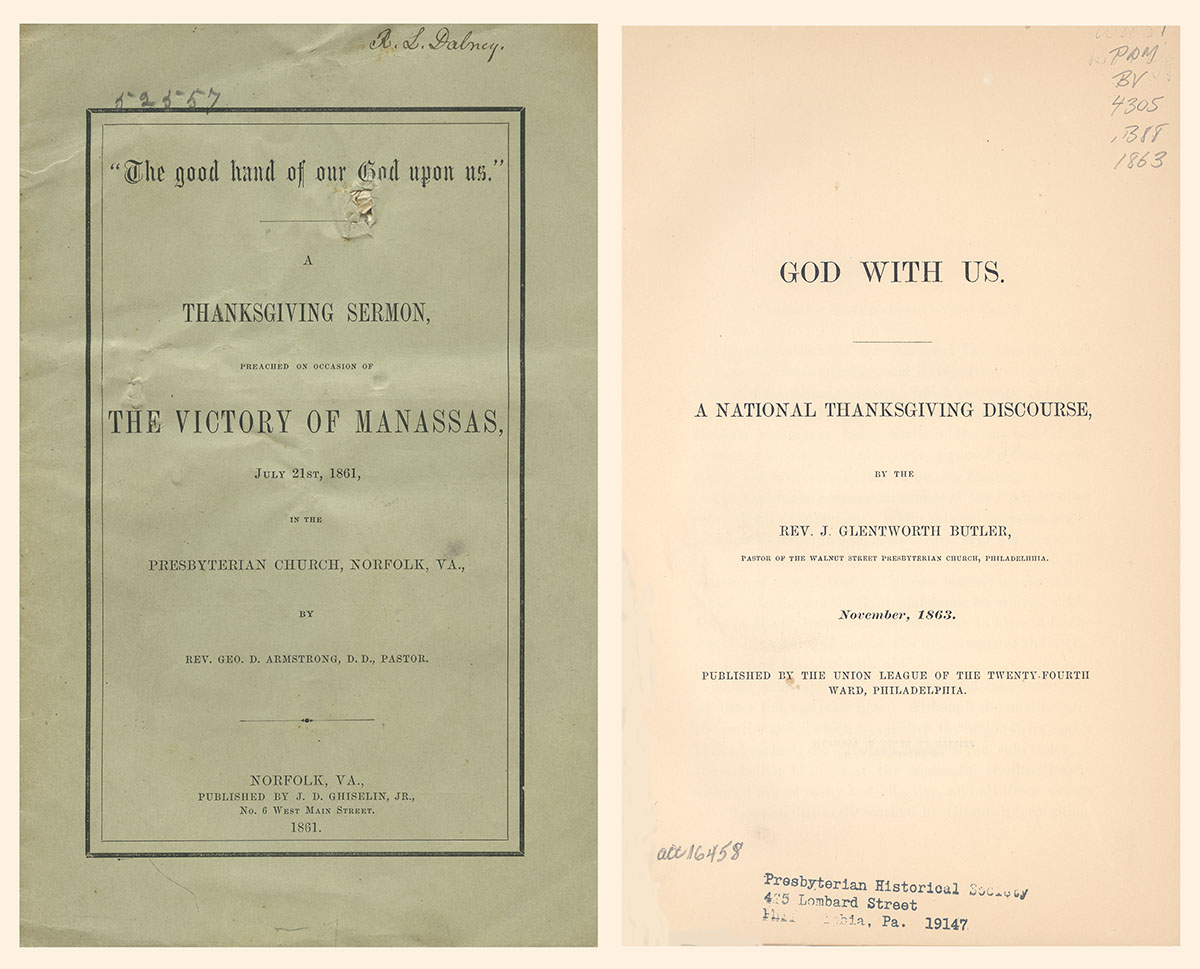 In 1845, Presbyterian pastors, Rev. Jonathan Blanchard (1811-1892) and Rev. Nathan Rice (1807-1877), held a four-day debate on the question “Is Slavery Itself Sinful, and the Relation between Master and Slave, a Sinful Relation?” A member of the New School, Blanchard debated the affirmative. 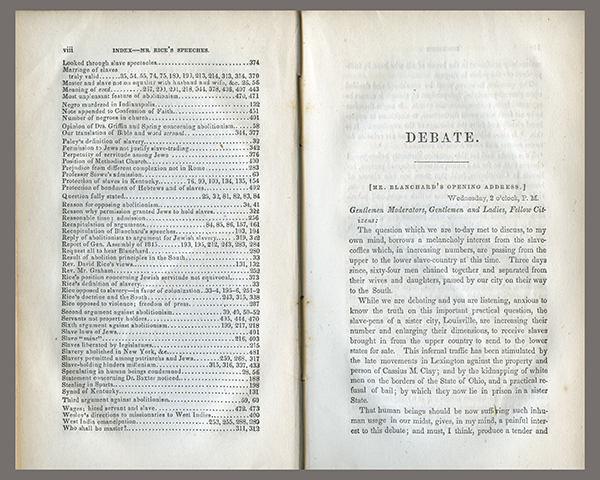 A Debate on Slavery: Held in the City of Cincinnati, on the First, Second, Third, and Sixth Days of October, 1845, upon the question, Is slave-holding in itself sinful, and the relation between master and slave, a sinful relation? (Cincinnati: Wm. H. Moore & Co., 1846).
"The noose of chattelism is around the neck of every slave, and brings back every fugitive to the most pious master, not as a man, but as an animal, a chattel a thing!"

"Thus slave holding is degrading men to the level of brutes as completely as the nature of the case will admit." (Blanchard, A Debate on Slavery, 46) 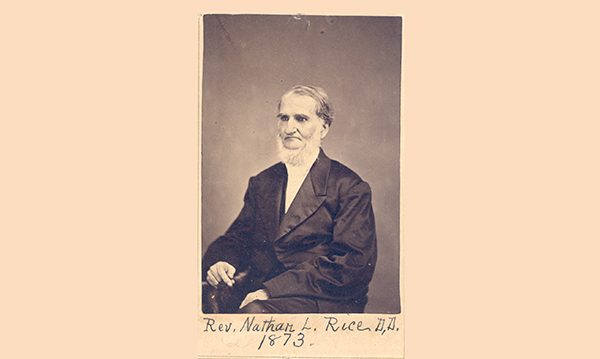 View full image.
Old School member Rice argued for the negative.
"The fact then is clearly established if language can establish it that God did recognize the relation of master and slave as under the circumstances, lawful, and did give express permission to the Jews to purchase slaves from the heathen, and hold them." (Rice, A Debate on Slavery, 291)
Abolitionism

The Anti-Slavery Society, based in New York City, published monthly The Anti-Slavery Record. Arthur Tappan (1786-1865), a Presbyterian, and William Lloyd Garrison (1805-1879) founded the abolitionist group in 1833. 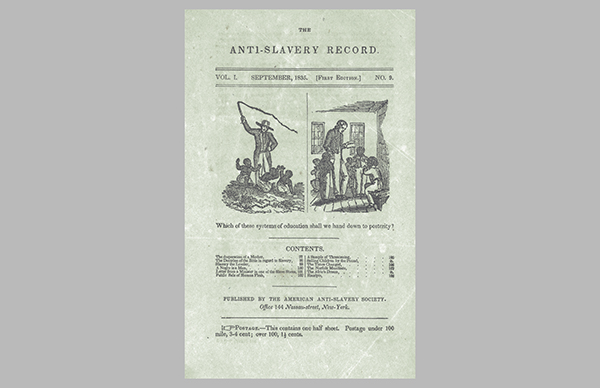 The overzealous language and tactics of some abolitionists brought about criticism from certain ministers. Henry Van Dyke (1822-1891) was a Presbyterian minister of the Old School branch. In an 1860 sermon, he stated that slavery was a necessary step in bringing Africans towards Christianity and that abolitionists were dividing the country. 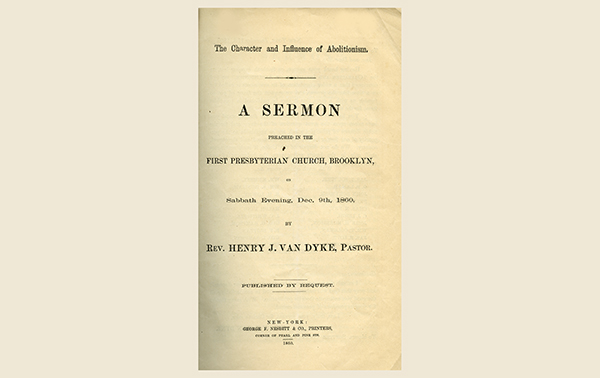 “I am here to-night, in God’s name, and by his help, to show that this tree of Abolitionism is evil, and only evil—root and branch, flower, and leaf, and fruit; that it springs from, and is nourished by, an utter rejection of the Scriptures; that it produces no real benefit to the enslaved, and is the fruitful source of division and strife, and infidelity, in both Church and State.” (Van Dyke, The Character and Influence of Abolitionism, 7)

Rev. Dr. Andrew H. H. Boyd (1814-1865) delivered a Thanksgiving sermon on November 29, 1860, just months before the war broke out. In his sermon, Boyd discussed his fears of what might result from the disagreements over “the peculiar institution” of slavery. While he viewed the North as an instigator, he hoped political compromise would continue to preserve the Union. Towards the end of the war, Boyd was imprisoned at Fort McHenry in Maryland for being a Confederate sympathizer.

“. . . Let us render to Him the sincere thanksgiving of our hearts; let us before His altar this hour, purpose to do our part to strengthen, by all legitimate means, the ties that should bind together every part of this Union. . .” (Boyd, Thanksgiving Sermon, 20) 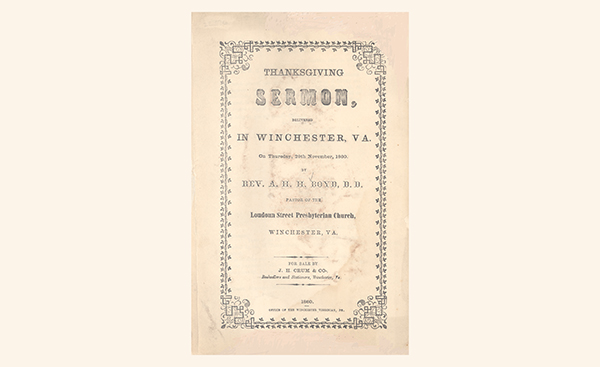 Rev. Benjamin Morgan Palmer (1818-1902), a leading Presbyterian pastor and theologian, delivered his most famous defense of slavery and call for Southern secession in a Thanksgiving sermon preached to his New Orleans congregation, First Presbyterian Church, in the wake of Abraham Lincoln’s election to the U.S. presidency in November 1860. A year later, the first General Assembly of the Presbyterian Church in the Confederate States of America elected Palmer as moderator. 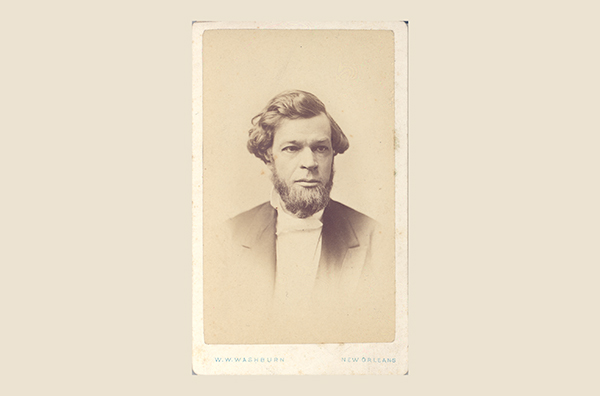 “. . . the duty is plain of conserving and transmitting the system of slavery, with the freest scope for its natural development and extension. Let us, my brethren, look our duty in the face. . . . My own conviction is, that we should at once lift ourselves, intelligently, to the highest moral ground and proclaim to all the world that we hold this trust from God, and in its occupancy we are prepared to stand or fall as God may appoint."

(Benjamin M. Palmer, The South: Her Peril, and Her Duty. A Discourse, Delivered in the First Presbyterian Church, New Orleans, on Thursday, November 29, 1860. New Orleans: Office of the True Witness and Sentinel, 1860, pg. 7.)

This pamphlet was published and distributed throughout the Confederacy, although it is not clear who the author is, or where it was published. The self described “Rebel Prayer” focuses on the theological virtues of the rebellion. 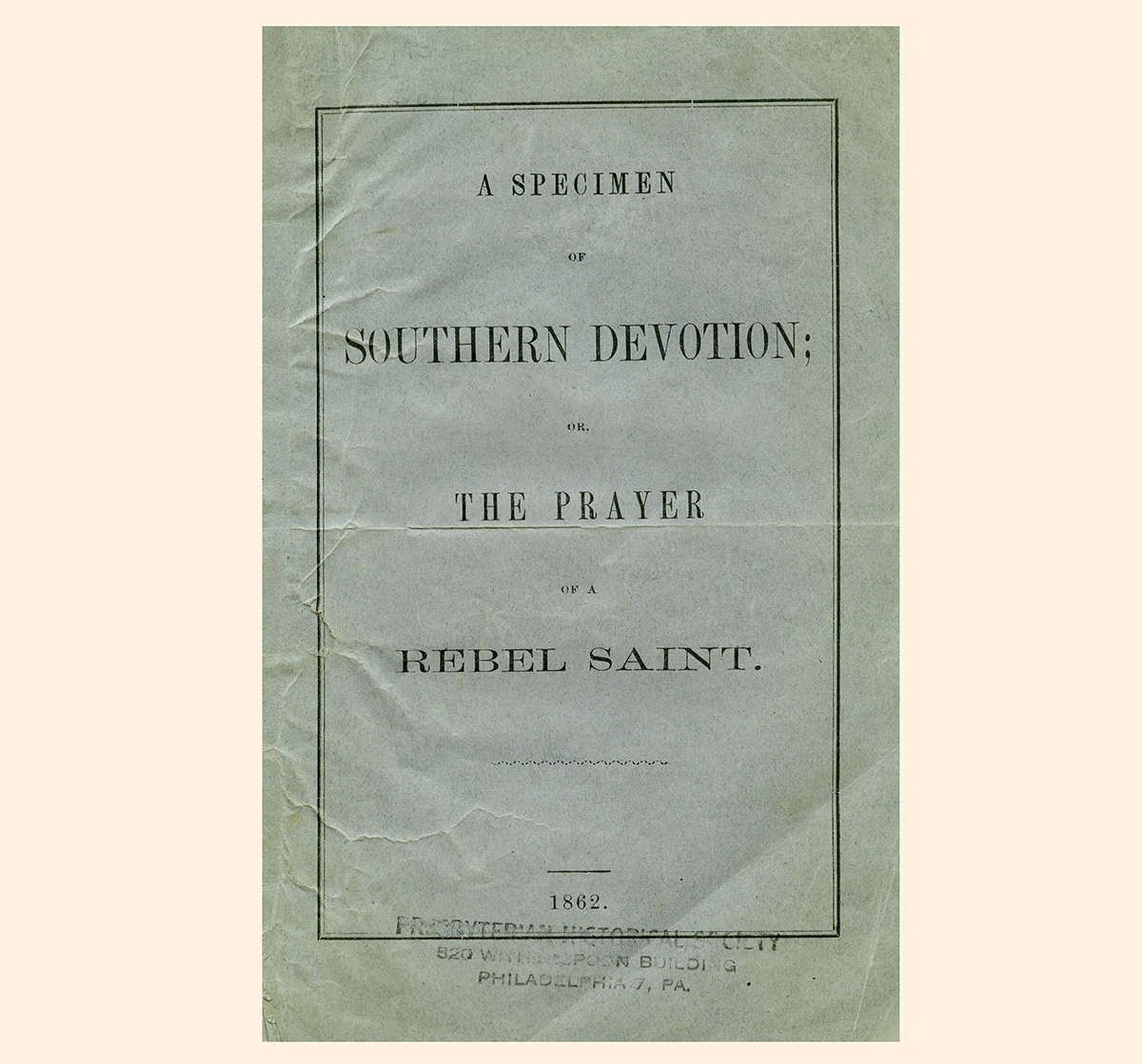