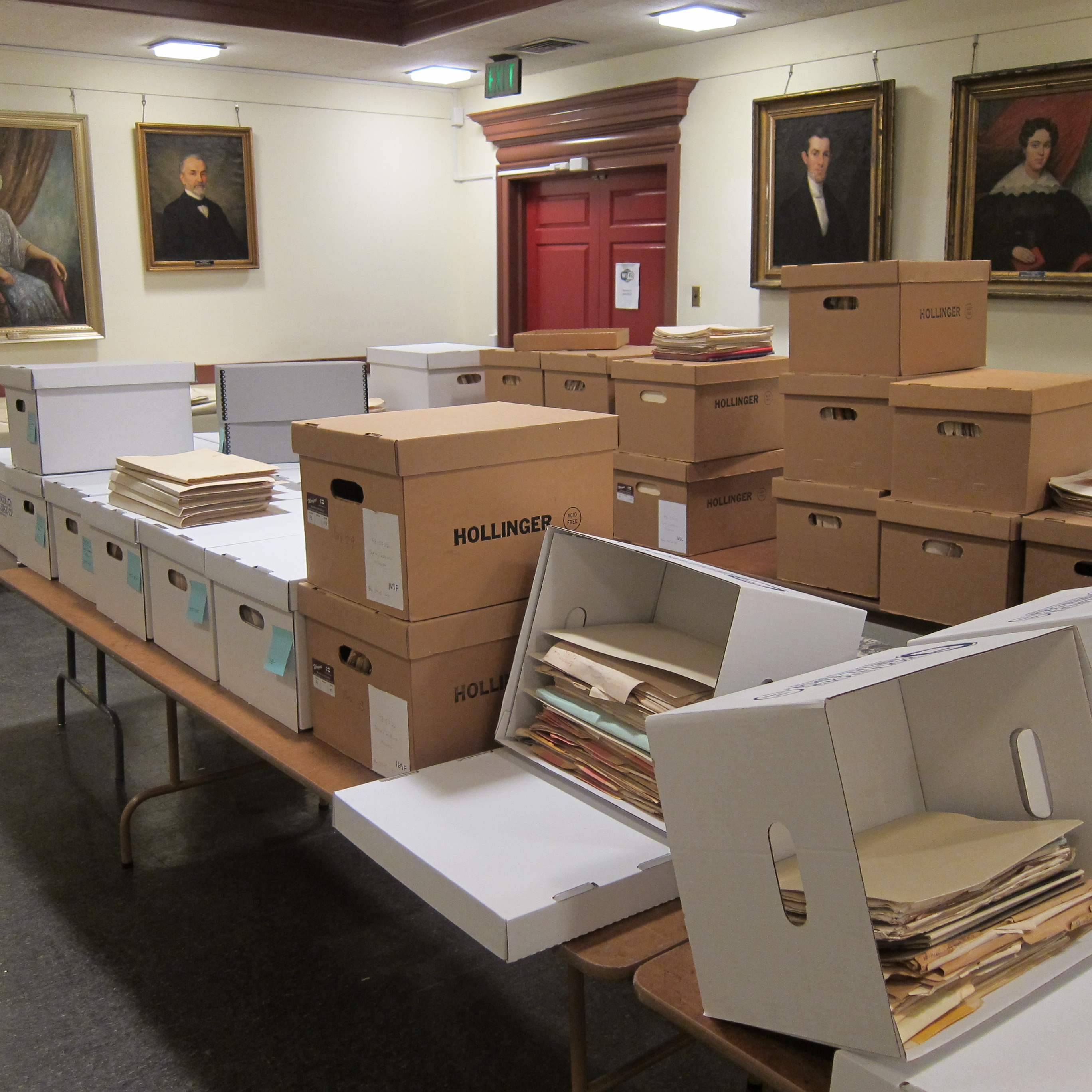 Beginning in December 2014, and continuing for 163 man-hours through June 2015, Archives Technician Michael Carroll and I processed the new Record Group 492, Syria-Lebanon mission records. We removed 9 pounds of rusted metal fasteners and rehoused records in 775 acid-free folders, putting the collection in a fit state for researchers.

The collection's earliest records, dating to 1822, are deeds for property in Homs owned by the American Mission. The collection's latest records are letters home from Benjamin and Carol Weir to their children Susan and Christine and to "Teepee"--Benjamin Weir's older brother, Thomas Patterson Weir. The letters date from shortly before Benjamin Weir, the Presbyterian Church Representative to Syria, Lebanon, and Iran, was kidnapped in May 1984 and held hostage in Lebanon. The bulk of the collection--some 44 boxes--had been moved from Benjamin's office in Beirut to a basement at the Near East School of Theology (NEST) before 1984, and had been transferred to PHS by Benjamin and Carol in 1998, shipped here by boat.

Our first aim in processing was to gain physical control of all the material. Over a few days in February, Michael and I removed all the mission records from their boxes, removed extraneous packaging, and did a rough sort by genre and topic. The UPCUSA mission station in Beirut, during and for a decade after the 1959 transfer of operations to the National Evangelical Synod of Syria and Lebanon, rearranged its files several times; though this produced a series of indexes which no longer bore any relationship to reality, it also meant that mission workers had often usefully foldered records, and had labeled the folders, so we could follow in their footsteps.

We quickly broke the collection into functional areas--the main run would be of mission minutes, correspondence, and subject files. There would follow four smaller groups documenting narrower mission functions and relationships: the work of the Jinishian Memorial Program, which continues today; financial records; personnel records; and property records.

Some early records of the mission had been damaged by insects during storage at the mission office: the insects were long dead, but the volumes continue to release dust and sand, and so now have a separate container. Oversize volumes of minutes likewise received special containers.

With the collection roughly sorted by functional area, we gathered the bulk of minutes of the mission, from 1835 to 1959, at the beginning of the main run. We then sorted the mission's subject files alphabetically, following original folder titles where available. A folder of clippings and publications on the Six Days' War of 1967 included a newsletter photograph of a Palestinian refugee burned by napalm:

Benjamin Weir's letters back to Presbyterian headquarters at 475 Riverside Drive make plain the routine nature of indiscriminate violence in Lebanon. He reassures agency staff that no Presbyterian-affiliated lives or property were lost in the "sustained two-hour bombing raid" of April 21, 1982, before continuing with ordinary business about a fund for the distribution of Arabic-language Bibles.

In a letter home to family of April 12, 1984, Weir identifies possible paths out of Beirut for a South Sudanese student at NEST, and describes a picnic briefly broken up by distant shelling, as if by a sudden outburst of rain:

Within three weeks of this letter, with its closing, Vonnegut-inspired "So it goes," Weir was captured by militants of the radical Shia group Islamic Jihad. Weir would be released after 16 months in captivity. In related collections, we hold videotape of Weir's first press conference following his release; it is now available on our YouTube channel:

In my own work, nothing is more rejuvenating than to be allowed to move through a collection of materials with the eye of a journalist, and I'm excited to be able to deliver much of this hitherto-inaccessible material to researchers.

Expect to hear more in this space about the Presbyterian encounter with the Middle East, and about Benjamin Weir in particular, through 2015.