The Whole Gospel for the Whole Community: The Legacy of Matthew Anderson 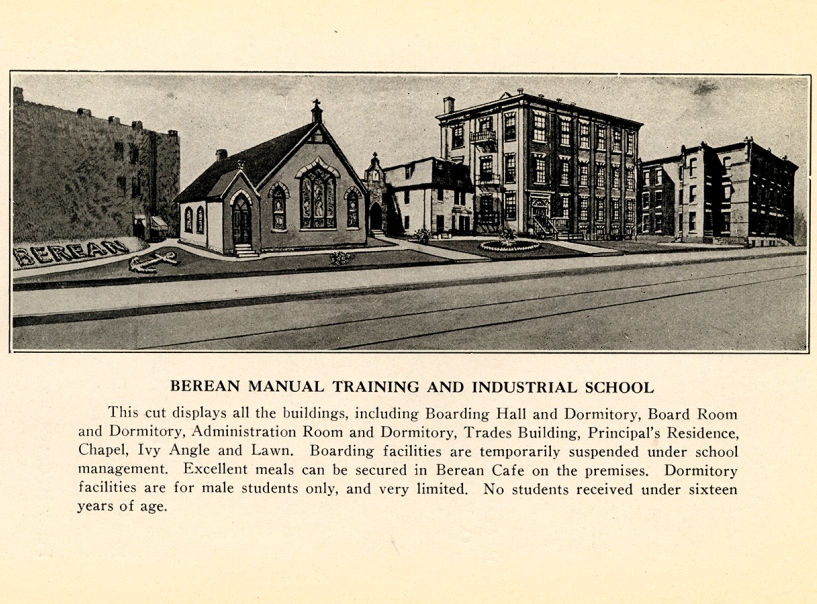 In the expanding industrial city which was Philadelphia after the Civil War, a flood of new migrants doubled the African American population, already the largest in the North. Most of the new arrivals were freed slaves from the South, fleeing poverty, violence, and a landless future in an agricultural society. The Philadelphia black community soon grew beyond its old wards in the southeast corner of Center City. By 1879, the northwestern section of the city (now the Fairmount section), was home to more than six thousand African Americans, but with very few churches of any kind.

The Rev. Dr. John B. Reeve, the forceful minister of the Lombard Central Presbyterian Church, encouraged a recent graduate of Princeton Seminary, Matthew Anderson, to stay in the city and form a new Presbyterian congregation in this area. That congregation, the Berean Presbyterian Church, became a model for a new form of urban ministry—one which was widely admired in its own time, and which is still imitated today.

Matthew Anderson was born in rural Antrim Township, Franklin County, Pennsylvania, in 1847. He was a birthright Presbyterian—the heir of five generations of Presbyterian forbears going back to colonial days. He left home as a teenager and prepared for college at a small academy in rural Ohio. He entered Oberlin College in 1871, after spending two years as a teacher in a freedmen’s school in Salisbury, North Carolina. His ambition was to be a preacher and a teacher, possibly in the new South.

He entered Princeton Seminary in the fall of 1874, and made it clear to the faculty that he would not accept a second-best education or segregated housing. He was lodged in the main seminary building—the first black resident there anyone could remember—and was admitted to the full academic program. He studied under Charles Hodge and James McCosh, two of the best minds the seminary and the college had to offer. He graduated in 1877 and spent two additional years at Yale doing graduate study before a chance meeting with Dr. Reeve, while passing through Philadelphia in 1879, redirected him to Fairmount, and to his life’s work.

Caroline Anderson, wife of the founder, ran a dispensary out of the parish house and organized a kindergarten, n.d. From RG 425 congregational vertical file.

Anderson began his career as an urban minister in October 1879. The African American community in Philadelphia in the Gilded Age faced many of the same problems as do today's inner-city populations: poverty; crime; job discrimination; residential segregation; and poor housing, schools, and health care. Anderson attacked these problems with astonishing energy, creativity, and persistence. At the end of his first year of work, his sponsors rewarded him with several small gifts and a new pair of boots to replace the ones he had worn out tramping the streets.

He visited the unchurched, the sick, and the homebound of the neighborhoods, but he also called on everyone in the city with a reputation as a philanthropist, a benefactor, or “a friend of the African race.” Everywhere he went, he carried subscription books. If a donor would not pledge $100, he would present a $50 subscription book. If that was still too much, he had a $25 subscription book at the ready. By argument, persistence, tenacity, and sometimes by sheer stubbornness, Anderson wore down all resistance until he secured a pledge—and frequently a warm and regular supporter.

Some courses of study offered at Berean. From Berean Manual Training and Industrial School scrapbook, n.d. From accession number 951208c.

By 1880, he had assembled enough members to form a church; by 1882, he had raised enough money for the congregation to purchase a lot on South College Avenue, in the shadow of Girard College. In November 1884, the Berean congregation dedicated a “substantial and well-appointed blue marble church,” complete with a reading room and a gym. The Berean Presbyterian Church became the hub of a complex of buildings that would house an assortment of important social-service and self-help agencies.

Presbyterianism, Anderson maintained, was a faith which fostered intellectual rigor, moral discipline, personal virtue, and self-denial—virtues, he insisted, that the poorest community in Philadelphia possessed to the same degree as any other population. What the poor lacked, he said, were the institutional public supports for private virtue that wealthier communities took for granted. He labored for decades to create these supports for the poor.

To promote thrift, he founded a penny savings bank (1888). To promote home ownership, he founded the Berean Building and Loan Association (1888). To provide marketable job skills, he founded the Berean Manual Training School (1899). To promote good hygiene, his wife Dr. Caroline Anderson ran a dispensary out of the parish house (1890), and to promote good child care she organized a mother’s meeting and a kindergarten. By 1903, the Berean Manual Training Institute, in new buildings erected on South College Street, was the largest black training school in Philadelphia, while the savings and loan was the largest African American self-help enterprise in the city.

The Andersons poured their lives into serving the community. Caroline Anderson died in 1919, and Matthew Anderson in 1928, having served his church for over half a century. The Berean congregation moved in 1955 from its original location to its current buildings at Broad and Diamond Streets in North Philadelphia, where it continues its tradition of comprehensive ministry with the Berean Community Center.

The Reverend Kenneth J. Ross was born and raised in the Philadelphia area. He is a graduate of Lafayette College, Andover Newton Theological School, and Princeton Theological Seminary. A member of the PHS staff from 1990 to 2006, he now works as an interim minister in Philadelphia Presbytery.

Matthew Anderson, Presbyterianism: Its Relation to the Negro (1897).

Roger Lane, William Dorsey’s Philadelphia and Ours: On the Past and Future of the Black City in America (1991).