Fair Play and the 1936 Berlin Olympics 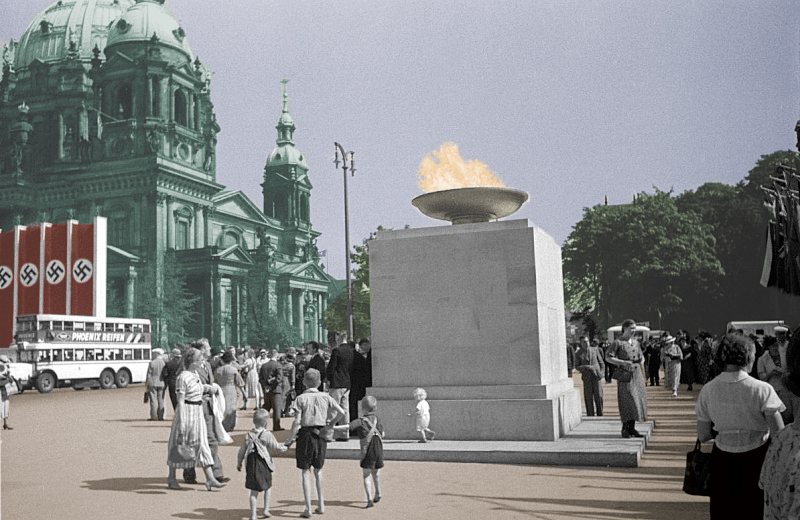 Olympic Flame in Berlin, 1936 by Josef Jindřich Šechtl via Wikimedia Commons (CC by 2.5). Colorized by PHS.

Despite controversy in the lead-up to the 2016 Rio Olympics, international participation in the Games is robust. A few athletes have stayed home to avoid contracting Zika, and a large segment of the Russian team has been banned for doping violations, but no country has withdrawn its entire team.

Eighty years ago, participation in the 1936 Summer Olympics, held in Berlin, was much less certain. The International Olympic Committee awarded the Games to Berlin in 1931, two years before the Nazi Party came to power in Germany. Hosting the games provided the Nazi government the chance to showcase Germany’s development into a strong, modern nation following the devastation of the First World War. It also provided a distraction from the increasingly inhumane policies designed to purify the German population by excluding Jews and other minorities from all aspects of German life, including the realm of sport. The use of the games as propaganda for this terrible regime was greatly disturbing to observers such as Henry Smith Leiper, a leader in the international ecumenical movement who traveled extensively through Europe in the 1930s. He reported his observations of the changes in German secular and religious life, as well as his growing apprehension about the Nazi government, in a series of detailed letters sent home to family and friends.

For Leiper and his fellow delegates at the 1935 summer meetings of the Universal Christian Council for Life and Work and the World Alliance for International Friendship through the Churches, the situation of the German Church and the Reich’s treatment of minorities were major topics of concern. In late August, he traveled to Berlin to look into the recently closed American Church in Berlin, and to meet with German church leaders, academics, and expatriate friends.

He also met, at her request, with Dr. Martha Unger, who worked for the Nazi Party’s Frauenwerk (department of work with women). He found that she, like many other Germans, had “swallowed whole and with complete gullibility” the party line that Jews were the source of Germany’s troubles. Although he “found it impossible not to ask a number of pointed questions,” he remained cordial, and only later, in his letter, set down his feelings about the “dark murders, oppression, lies, militarism and anti-religious activity of the party.” He finished his trip to Berlin feeling “more than ever disgusted and alarmed at the character of Hitlerism and its menace to the best things in human culture and religious heritage.“ [1]

As Berlin’s preparations for the Olympic Games progressed, individuals and organizations around the world began to raise their voices in protest of this great symbol of fair competition and international friendship being hosted by a regime whose policies were grounded in anti-Semitism and racism. In the United States, opposition to holding the Games in Berlin was expressed by Jewish and Catholic organizations, and by the American Federation of Labor, the National Association for the Advancement of Colored People, and in the editorial pages of the New York Times, Commonweal, and the Christian Century.

The Committee was determined to expose Nazi discrimination and to ensure “No American Participation in the Olympic Games under Nazi Auspices,” as the group’s letterhead declared. The Committee organized a speaker’s series on German politics and the Olympics, they encouraged clergy to speak to their congregations in favor of non-participation, and they broadcast radio addresses explaining their reasoning for a boycott.

Henry Smith Leiper delivered one such address on November 12, 1935. He argued that, by its nature, the totalitarian Nazi government was incapable of running the Games in the spirit of fair play. He warned his listeners about the Nazis' use of the Olympics as propaganda to disguise the evils of the recently passed Nuremberg Laws that stripped German Jews of their citizenship rights. Although Hitler and his Sports Commissar had assured the International Olympic Committee’s Henri de Baillet-Latour and the American Olympic Committee’s Avery Brundage that Germany would comply with Olympic rules, Leiper said that these were empty promises, and the discriminatory policies would return in full force as soon as the Games concluded. He argued that on moral and patriotic grounds, all Americans must be concerned about these issues, not just Jews, and not just athletes. [2]

Avery Brundage with German officers in Berlin, 1936. via Wikimedia Commons

Leiper also gave the opening address at the large public meeting put on by the Fair Play Committee at Mecca Temple in New York City on December 3rd. He appealed to the members of the Amateur Athletic Union, slated to meet a few days later, to follow the lead of their president, Judge Jeremiah T. Mahoney, who strongly advocated withdrawing from the Games. Leiper declared that each AAU member faced the choice of casting his vote for “eternal principles of right and justice or for compromise, dictated by expediency and the natural desires for temporary enjoyment of a questionable privilege bought at the expense of the inalienable rights of certain of his fellow men.” [3]

After a lengthy debate at its December 9th annual convention, the AAU voted down Mahoney’s bid to withdraw the U.S. team from the Games. After this defeat, Mahoney declined to stand for reelection; he was succeeded as president by Avery Brundage, one of the staunchest backers of American participation in the 1936 Olympics.

"The Olympic Games in Berlin: A Question of Fair Play,” radio address, November 12, 1935, Leiper Family Papers, RG 490-6-14. Read the full address here: Part 1, Part 2, Part 3. Access via Pearl here.
The Games went on as planned in Berlin, with the participation of athletes from 49 countries, an increase from the 32 countries that attended the 1932 Games. The following fall, Henry Smith Leiper traveled to Brussels for the International Peace Conference. He reported speaking with a number of recent visitors to Berlin who were disappointed that the American boycott effort had failed. One interlocutor told him, “[O]f the 150,000 foreign guests who went for the Olympics, 145,000 at least will have been completely blind to what was going on under the surface. They are now going up and down the world advertising the wonders of Hitlerism from personal observation.…A great many of the people I have met over here this summer, including some Germans, have told me that they were very sorry we did not succeed in our campaign of the Committee on Fair Play in Sports.” [4]