What Is Inside This Time Capsule?

PHS' time capsule, at rest in a comfortable chair

During recent installation of new brick for what will become the Stated Clerks Square, masons removed from inside the sundial in our front lawn a metal cylinder two feet high and eight inches in circumference. I had had no idea that we owned a time capsule, but naturally we do. The institution is 154 years old; it will continue to disgorge secrets.

Americans developed something of a craze for time capsules in the 1960s--increased suburban development and the incorporation of new towns, and the imminent threat of nuclear annihilation, one theorizes, gave rise to a frenzy of digging. New pools, new fallout shelters, new metal canisters strewn like so many dogs' bones under so many green lawns. Time capsules satisfy a kind of material longing best represented in former ages by funerary mounds, embalming, and pyramids: they are our way of casting objects forward in time, allowing our future selves to reach back in time, breathing in its musk. 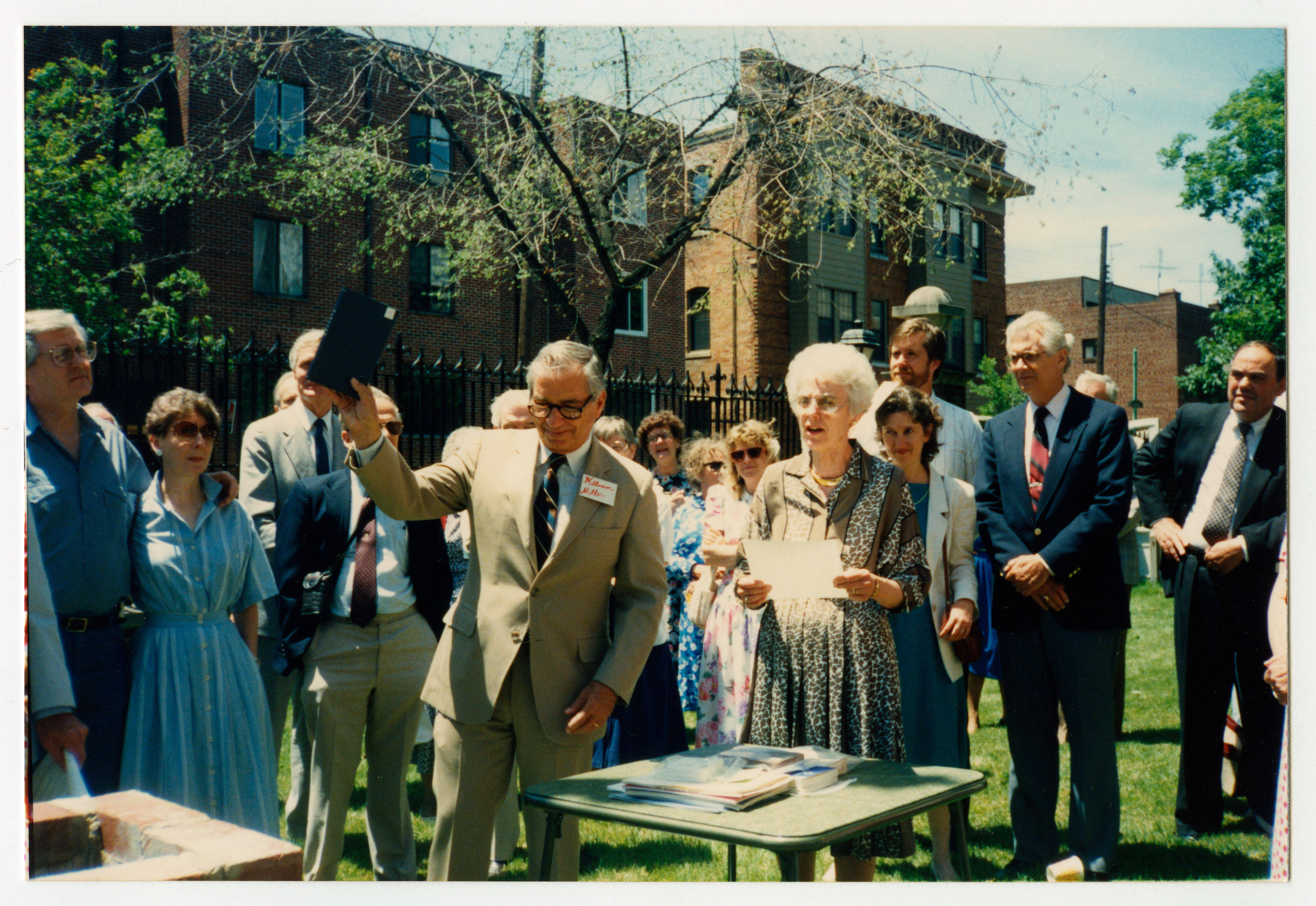 It's interesting to me that the Nazi time capsule recently unearthed in Złocieniec, Poland, purportedly had an original motion picture of the town inside it and is now lost, because it would have had a better shot at persistence being in an archives. (The film would have been captured by the Soviet Army and would now be in the Rossiiskii gosudarstvennyi voennyi arkhiv, but still.) The Dana Point, California, time capsule is chiefly documented not by itself, but by the Orange County Archives. Time capsules are remarkably mute. They do not effectively document or prove anything about the past. Archives do that. 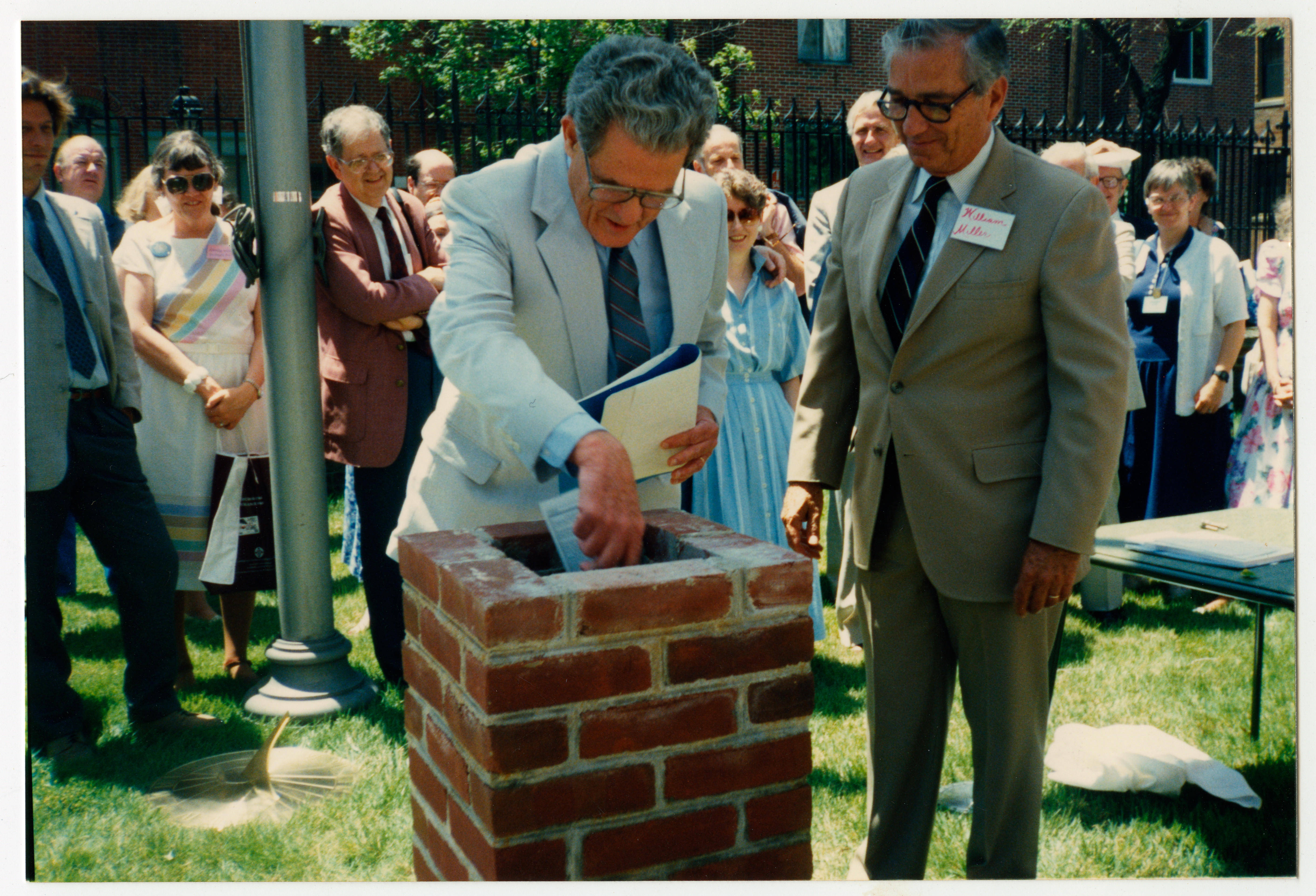 Our capsule was placed on site to commemorate the 201st General Assembly of the Presbyterian Church, held in Philadelphia, Pa., site of the first General Assembly in 1789. Our director, William Bayard Miller, and our board chair, George Laird Hunt, led the ceremony, placing printed materials, including an issue of the Presbyterian Outlook, into the canister. Fortunately for us, we have documentation of the event, processed into Record Group 22.

The capsule was intended to be opened on the denomination's 250th anniversary, at the 251st General Assembly. Now that there are biennial rather than annual assemblies, the anniversary year will not necessarily coincide with an Assembly year, so we've scheduled the capsule's opening for 2039, in accordance with what we think the Assembly's wishes might well have been.

For now, it has been added to our database of temporary records, and shelved on one of the immobile aisles of our mobile compact shelving.

So, to review: do not put time capsules underground; the consensus is that they should be copper or stainless steel; leave information carriers out of them. What then, should you put in a time capsule, assuming you're dead set on the idea, you maverick with your devil-may-care attitude toward archival science?

Probably not comestibles, because the information professionals who find them may eat them. Probably do not put live bacteria samples, nor vials of U-235, in them. Think about the things that entertain you the most when you see them in thrift stores, and vintage boutiques, and estate sales--wind-up toys and dancing hula girls, advertisements for cars and hair tonics. My own favorites are slide sorters, projectors, and carousels.

The carousel! Put fun things in your time capsule, because it is not the venue for gravitas. Put trinkets in your time capsule, little tokens of daily life, which bear no significance now, nor communicate any message other than "We were here and this is what we played with," but will, years from now, make another version of you, or a stranger to you, feel tenderness, even at the ironic remove of camp. "Camp," said Susan Sontag, "is a tender feeling":

Camp taste is a kind of love, love for human nature. It relishes, rather than judges, the little triumphs and awkward intensities of "character."

Let us relish, therefore, rather than judge the time capsule, kind bearer of nostalgia. See you in June 2039.