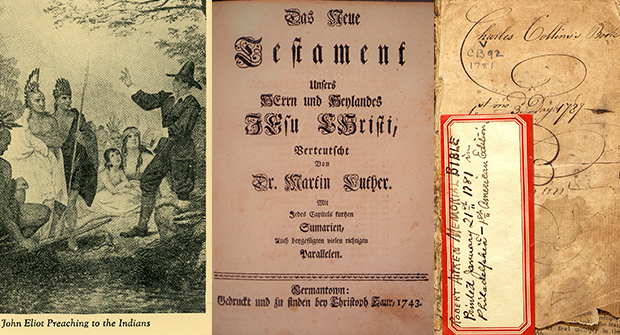 Quick trivia question: what language was the first Bible in the Western Hemisphere printed in? The answer is Algonquin—to be precise, the Natick dialect of Algonquin.

Today you can find a “Made in the U.S.A.” Bible in nearly every hotel room in America; most Gideon Bibles, for example, are printed in the Nashville area. But Bible publishing in the American Colonies was largely non-existent. English publishers provided the great majority of Good Books used in the colonies before the Revolutionary War, a dominance that was assured by a royal copyright barring their publication in the New World. Between 1663 and 1782, a span of 119 years, only three Bibles were published in America. All three are represented at the Presbyterian Historical Society.

A graduate of England’s Cambridge University, John Eliot arrived in Boston in 1631 and soon began ministering to Native Americans in Roxbury. Eliot’s zeal to convert New England’s original inhabitants was shared by many of his fellow Puritans and by Parliament, which created and funded the Society for the Propagation of the Gospel in New England in 1649. The Puritans established villages for Native American Christians, or “praying Indians,” in modern-day Natick and Newton as well as other parts of the Massachusetts Bay Colony.

Eliot was famous among Puritan missionaries for tackling the main barrier to conversion: language. With the help of an Indian known as Cockenoe, Eliot began to learn the native tongue. In 1646, he delivered the first Christian sermon in an Indian language at Nonantum, Massachusetts.

Images from John Eliot vertical file, RG 414, including a page of the Eliot Bible, printed 1663.

Eliot later translated the Ten Commandments, the Lord’s Prayer, and some of the Psalms into the local dialect of Algonquin, which had few characters for a written language compared to European languages. Partly for that reason, Eliot and other missionaries ended up teaching Native Americans to read English. A finished Bible was printed in 1663 in Cambridge, Massachusetts, with Algonquin words phonetically translated into English characters.

The Historical Society’s single page of the Eliot Bible, displayed above, comes from Chapter 4 of the Gospel of Luke. Below, you can see like passages from the other featured Bibles.

Born in Germany, Christopher Sauer (also spelled Saur or Sower) arrived in Philadelphia in 1724. There he tried a variety of trades including tailoring, farming, clock-making, and even bloodletting before starting a publishing business north of the city in Germantown. His business catered to the underserved German population and he soon became the most active German-language publisher in Colonial America. A resourceful entrepreneur and savvy businessman, he built his own press and imported type from Germany.

Sauer printed 1,200 copies of his 1743 edition, which cost 18 shillings (or roughly $120 today). Since it was intended for a German audience, Sauer’s Bible was based on Martin Luther’s Bible, which was first published in full in 1534 following 13 years of arduous translation by Luther and a team of scholars in Wittenberg, Germany. A third edition of Sauer’s Bible, published in 1776, is the most difficult to find today due to a historical quirk that brings to mind the story of Presbyterian chaplain James Caldwell at the Battle of Springfield shouting, “Give ‘em Watts, boys!” Unbound sheets from the 1776 Sauer Bible were seized by the British during their occupation of Germantown in 1777 and used as gun wadding.

The shortage of Bibles during the Revolutionary War could mostly be attributed to diminished trade with England. Presbyterian ministers such as Francis Alison petitioned the Continental Congress to obtain more Good Books, and Congress responded by arranging to import 20,000 Bibles from Holland. Soon afterward, however, the British captured Philadelphia and the Bibles never arrived. Robert Aitken, a printer born in Scotland and based in Philadelphia, had recently published some New Testaments. He began work on a full Bible largely with his own money.

Aitken’s Bible was authorized by the Continental Congress in September 1782, the only bible ever to receive Congressional approval. Both Episcopal Bishop William White and Reverend George Duffield, pastor of Philadelphia’s Third Presbyterian Church (a predecessor of today’s Old Pine Presbyterian Church), examined the Bible and reported back to Congress their favorable response: “Having selected and examined a variety of passages throughout the work, we are of opinion that it is executed well with great accuracy as to the sense, and with as few grammatical and typographical errors as could be expected in an undertaking of such magnitude.”[1]

Aitken printed 10,000 copies. Unfortunately for his sales, trade with England resumed shortly after the war ended in 1783 and English publishers shipped to America cheaper Bibles of better quality. Many Aitken Bibles never sold. The Synod of New York and Philadelphia purchased some of the overstock to distribute to the poor, but that was not enough to offset Aitken’s financial losses.

Samples of handwriting inside the Aitken Bible at PHS.

The Aitken Bible is currently on display, along with a story of wartime intrigue involving “R. Aitken” in the exhibit, Presbyterians and the American Revolution. Other chapters in early American Presbyterian history featured online include Long Island Puritan churches and Presbyterians at Jamestown.