Slavery, Labor, and Resistance in the Choctaw Nation 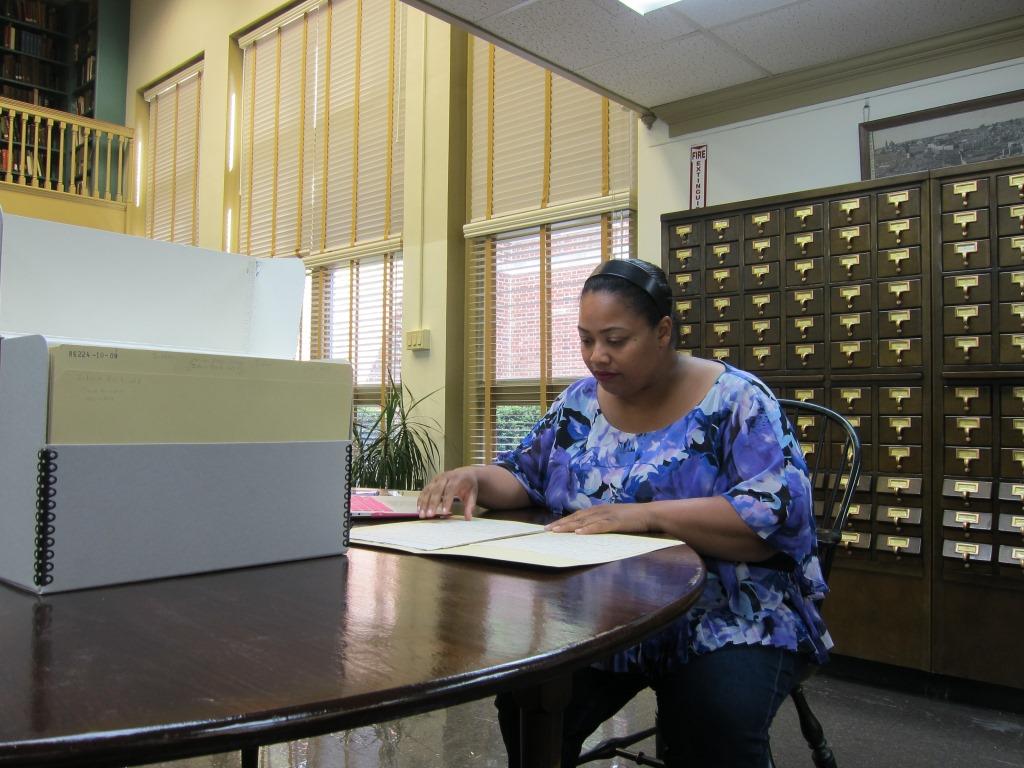 Nakia Parker in the Reading Room.

While investigating sources for a final paper in an undergraduate course on the American Civil War, I painfully discovered the history of American Indian participation in chattel slavery. Previously, I had viewed African Americans and Native Americans as identical comrades in the struggle against racism and oppression in this country. My desire to correct this thinking and contribute to the scholarship about the African American diaspora and the practice of chattel slavery in Southeastern Indian nations became the foundation for my current research interests. My dissertation project, “Trails of Tears and Freedom: Slavery, Migration, and Emancipation in the Indian Territory Borderlands, 1830-1907,” traces the forced migration patterns, labor practices, and resistance strategies of enslaved and free people in the Choctaw and Chickasaw nations during the time of the Indian Removal era in the 1830s to Oklahoma’s statehood in 1907. Record Group 224, American Indian Correspondence: the Presbyterian Historical Society Collection of Missionaries’ Letters has proved an invaluable aid in uncovering the ways enslaved and free individuals performed labor, practiced resistance, and assimilated (or did not) into native kinship networks and sovereignty.

Presbyterian missionaries first arrived in the Choctaw and Chickasaw nations around 1820, with the intent of establishing mission churches and schools. These efforts coincided with the federal government’s coercive “Civilization Plan” for Native Americans, which included the adoption of sedentary farming practices, centralized government, Christianity, and slave-owning. Some prominent slave-owning Indian leaders, such as Peter Pitchlynn in the Choctaw Nation and James Colbert in the Chickasaw Nation, gave large amounts of money to the mission schools, in part because they desired their children to have an education. Maintaining these schools, however, required a substantial amount of physical labor. Many missionaries turned to enslaved labor to fill this need. By the 1840s, with abolitionist sentiment reaching a fever pitch, a schism developed between the Presbyterian Church and the American Board of Commissioners for Foreign Missions (a multi-denominational organization that oversaw mission work in Indian Territory) over the use of enslaved labor. To assuage the situation, Presbyterian missionaries attempted to hire freed blacks to work at the schools, with mixed and often contentious results. Letters I discovered in Box 10 of the American Indian Correspondence collection, which covers the Choctaw Nation from 1841 to 1849, demonstrate the battles waged over labor practices at Spencer Academy, a prominent school for Choctaw boys founded in 1841.

Edmund McKinney, the missionary in charge of Spencer Academy, wrote on July 18, 1844 to Walter Lowrie, a former U.S. senator serving on the Presbyterian Church in the U.S.A. Board of Foreign Missions in New York City. He detailed a conflict over his hiring of a “free man of color,” Oliver Ingles, and his family from Fort Smith, Arkansas, “at very high wages.” According to McKinney, as soon as Choctaw leader Peter Pitchlynn found out about the hiring, he demanded that the man be dismissed from Spencer Academy based on a law in the Choctaw Constitution that forbade free people from residing in the Nation. If Ingles refused to leave, he and his family would be arrested by the light-horsemen force (equivalent to the police in the Choctaw Nation) and sold into enslavement for a year.

Ingles, however, did not take this treatment lightly when McKinney tried to dismiss him. McKinney recounted in another letter how Ingles argued that “the U.S. Government had put him here, and it only could remove him, and that he had got a friend to write Major [William] Armstrong on his behalf,” so he could stay in his position as steward. In addition, McKinney complained that Ingles “had made no preparations to go, and was using as he had been for sometime, very threatening language towards me.” The situation dragged on for several months, until Ingles finally relented and left Spencer Academy, but only after “he and his wife received full compensation.”

This brief, yet fascinating account, reveals the tensions in the Choctaw Nation between slavery, religion, and free and unfree labor before the American Civil War. Native nations were not always “safe spaces” for enslaved and free black people, especially when their interests collided with Native autonomy, sovereignty, and finances. Nevertheless, individuals like Oliver Ingles knew their rights and actively petitioned religious, legal, and government institutions for aid in protecting them.

Nakia Parker is a doctoral candidate in the Department of History at The University of Texas at Austin.  Her dissertation project, “Trails of Tears and Freedom: Slavery, Migration, and Emancipation in the Indian Territory Borderlands, 1830-1907” examines the forced migrations, resettlement patterns, and labor practices of people of African and black Indian descent enslaved in Choctaw and Chickasaw communities during the nineteenth century.

Miles, Tiya. Ties That Bind: The Story of an Afro-Cherokee Family in Slavery and Freedom. Berkeley: University of California Press, 2006.

Perdue, Theda. Slavery and the Evolution of Cherokee Society, 1540-1866. Knoxville, TN: The University of Tennessee Press, 1979.