Charles Yerkes and the Church Within East German Socialism 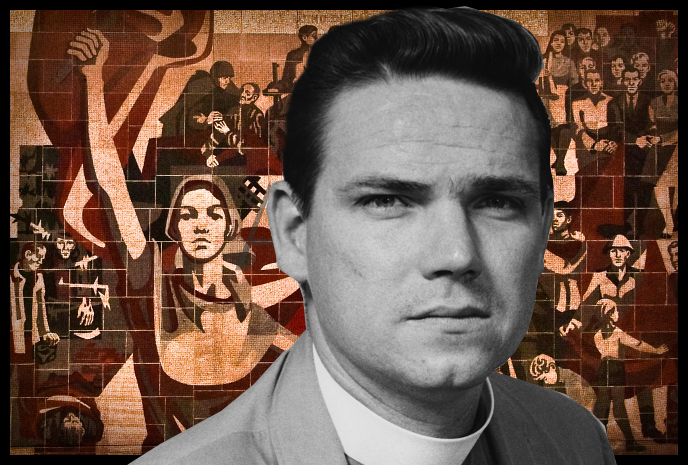 A recent question that came across our reference desk led us to the amazing career of Presbyterian minister Charles Yerkes--backpacker, military interrogator, chaplain of Tompkins Square, and friend of the Protestant churches of East Germany.

Charles Thompson Yerkes was born 10 April 1931 in Lincoln, Nebraska. His father died when Yerkes was one and a half years old, and his mother moved Charles and his older sister Barbara west, eventually to California. He grew up in the--by his account-- conservative evangelical First Presbyterian Church (Berkeley, Calif.). He studied French at Stanford University from 1949 to 1951, spent a year at the University of Paris, and returned to school at Cal Berkeley in 1952. From 1953 to 1956 he served in military intelligence for the United States Army, working at the East German border as an interrogator and translator; here he picked up Russian and German. Yerkes returned to Berkeley and finished his BA in French in 1958. He spent 1959 to 1961 at Princeton Theological Seminary, completed a B. Div., and was ordained.

Yerkes’ call was to inner city ministry. He served Good Shepherd-Faith Presbyterian Church (New York, N.Y.) from 1961 to 1964 and joined the UPCUSA Board of Christian Education as an observer in the BCE’s city church project. Assigned to Chicago, Yerkes' studies were intended “to enable churches amid urban change to develop more effective teaching and learning.” He returned to New York, serving as co-director of Urban League Street Academies (1967-1970), then as chaplain of the Tompkins Square Community Center (1969-1972), finally in the Presbytery of New York City’s ministry to the imprisoned (1973-1978). He began work on a doctorate at Union Theological Seminary in New York in 1980, his thesis on philosophical concurrences in the work of Dietrich Bonhoeffer and Louis Althusser.

Charles Yerkes to Syngman R... by on Scribd

A career of service to the people of America’s inner cities led Yerkes to a committed Marxism. In a 6 April 1981 letter to Syngman Rhee (then UPCUSA Area Coordinator for East and Southeast Asia) responding to a call to serve as a theological educator at the Presbyterian Theological Seminary in Seoul, Yerkes writes: “In my view the theory and practice necessary to bettering the lot of distressed peoples today is the one formed in the 19th and 20th centuries by Karl Marx, Friedrich Engels, and their later developers: it is thoroughly Marxist. I left the New York streets to come to seminary to reconcile my understandings of Marxism and the Christian gospel intellectually.” By his own account, Yerkes found himself to the left of Latin American liberation theology: “All this is a step or two beyond the ‘liberation theologians’ of our day, who distinguish (a useful) Marxian social analysis from (a Christianly useless) materialist ontology. I reject the distinction. In ‘the final analysis,’ you cannot entertain, you cannot deploy[,] the one without the other; and, even as a Christian, I do not.” By this Yerkes meant that neither he nor the seminary could serve Christ in accordance with their conscience if the Marxist educator joined the anti-Marxist school.

Charles Yerkes reports from... by on Scribd

Yerkes was appointed the National Council of the Churches of Christ in the U.S.A. (NCC) liaison to the Federation of Protestant Churches in the German Democratic Republic (colloquially, the Bund) in July 1982. His role was to help interpret to American Christians what life for Protestants in East Germany was like. In a letter for a high school audience, Yerkes reports on the “Ten Days for Peace” rallies organized by the Protestant churches of the GDR in November 1982, an echo of that summer's American nuclear freeze protests, emphasizing the stereotyped vision of East Germany in the minds of American Christians: “Young people and adults did this in the GDR, in the German Democratic Republic, in what most people in the U.S.A. call ‘East Germany.’ They did it behind the ‘Berlin Wall,’ on the other side of the ‘Iron Curtain,’ inside the Soviet bloc. Peace Week in a Communist country, over there where, whatever it is they’re doing, they’ve got a lot of Americans scared half to death (and, by the way, vice versa).” In other reports home, Yerkes is careful to remind his readers that the Bund saw its Christian witness as specific to the GDR, and that it was “the church not alongside, not against, but within socialism.”

Yerkes would return to Germany in 1991 to serve as the pastor of the Evangelical Lutheran Church in Mecklenburg and as a guest lecturer in social ethics at the University of Rostock. That May he wrote to PC(USA) officials, explaining that he had special motivation to use what he saw as his few remaining years: he was among "the one-in-fourteen citizens in lower Manhattan who are infected with the immunity-deficiency virus. I have sheltered other victims for some time, but neither I nor anyone else believed I would join them. I did." While serving in Rostock, Yerkes' health quickly deteriorated. He returned to Carmel, California, in July 1993. He died that December, in the care of friends, surrounded by his favorite books.