"Is Anyone Else Out There Gay?" | Presbyterian Historical Society
Skip to main content
Shop

"Is Anyone Else Out There Gay?" 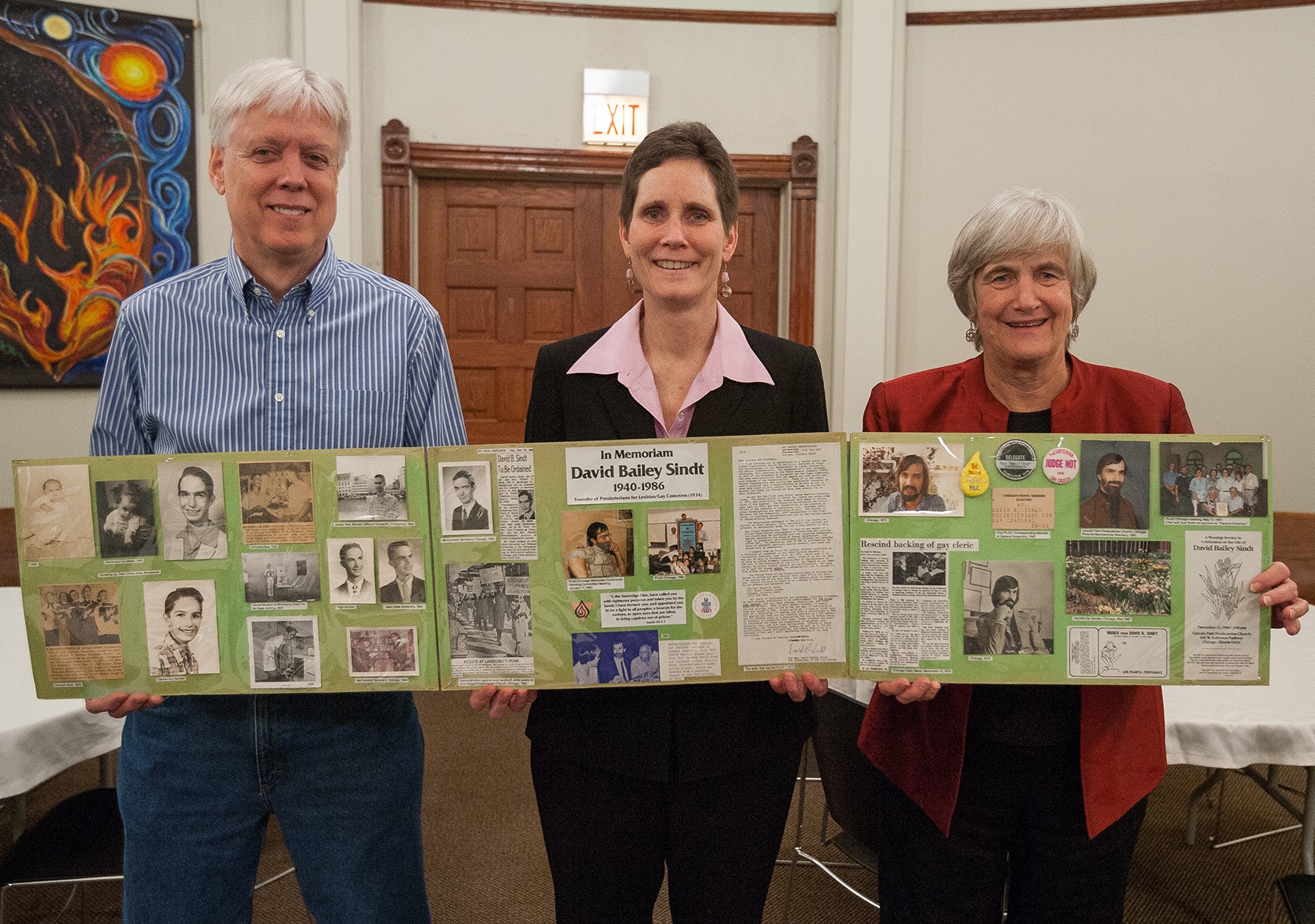 Barry Smith, Rev. Beth Brown, and Rev. Janie Spahr in 2014 holding up the David Sindt Collage that was created by Barry Smith. The collage is housed in the archives of Lincoln Park Presbyterian Church in Chicago. Photograph courtesy of Barry Smith.

At the 1974 General Assembly of the United Presbyterian Church in the U.S.A., David Sindt stood on the Assembly floor holding a hand-written sign that read, “Is anyone else out there gay?”

David Sindt was born in 1940 and grew up attending Presbyterian churches in Minneapolis, Minnesota. He received his Masters of Divinity in 1966 from McCormick Theological Seminary in Chicago and was ordained by the Presbytery of St. Paul in 1965. In 1971, he attained a Masters of Social Work from the University of Michigan and began working for the Chicago Department of Children and Family Services. Also during that year, Sindt began to identify as an openly gay man. He became active in the Chicago Gay Alliance and simultaneously started worshipping at Lincoln Park Presbyterian Church. In 1972, the Session called David to serve as an assistant pastor and establish an outreach program to the local gay community, but this call was rejected by the Presbytery of Chicago the following year. This was believed to be the first call ever issued to an openly gay man by a Presbyterian congregation.

Sindt began sending letters to select Presbyterians early in 1974, hoping to seek out people who would be interested in advocating for gay concerns within the Church. Sindt’s letters initiated the formation of the Presbyterian Gay Caucus (PGC), which met for the first time at the 1974 Assembly where he held up his hand-written sign. Sindt spent the next five years as the PGC’s national coordinator, helping it to establish a network of LGBTQIA+ individuals and allies throughout the church who could support one another as they worked for full membership and ordination rights. The organization was renamed Presbyterians for Lesbian and Gay Concerns (PLGC) in 1977, and continues its advocacy work today as More Light Presbyterians.

David Sindt spent the rest of his life working for LGBTQIA+ rights through PLGC, various gay community organizations, and as an active member of Lincoln Park Presbyterian Church. He inspired that congregation to create a position paper on LGBT ordination rights in 1980, and in 1981 the session voted to become a More Light congregation. Sindt was diagnosed with AIDS in 1985 and died on December 3, 1986.

The story of David Sindt holding up his sign at the General Assembly has become an iconic moment in the history of More Light Presbyterians as well as in the entire movement for LGBTQIA+ inclusion in the Church. People have told and retold the story as a symbol of hope and immense bravery that occurred during a time when it was unsafe to be openly gay. The story has been written about in recently published books on queer history, posted about on the LGBTQ Religious Archives Network website, and More Light Presbyterians even made t-shirts inspired by it. 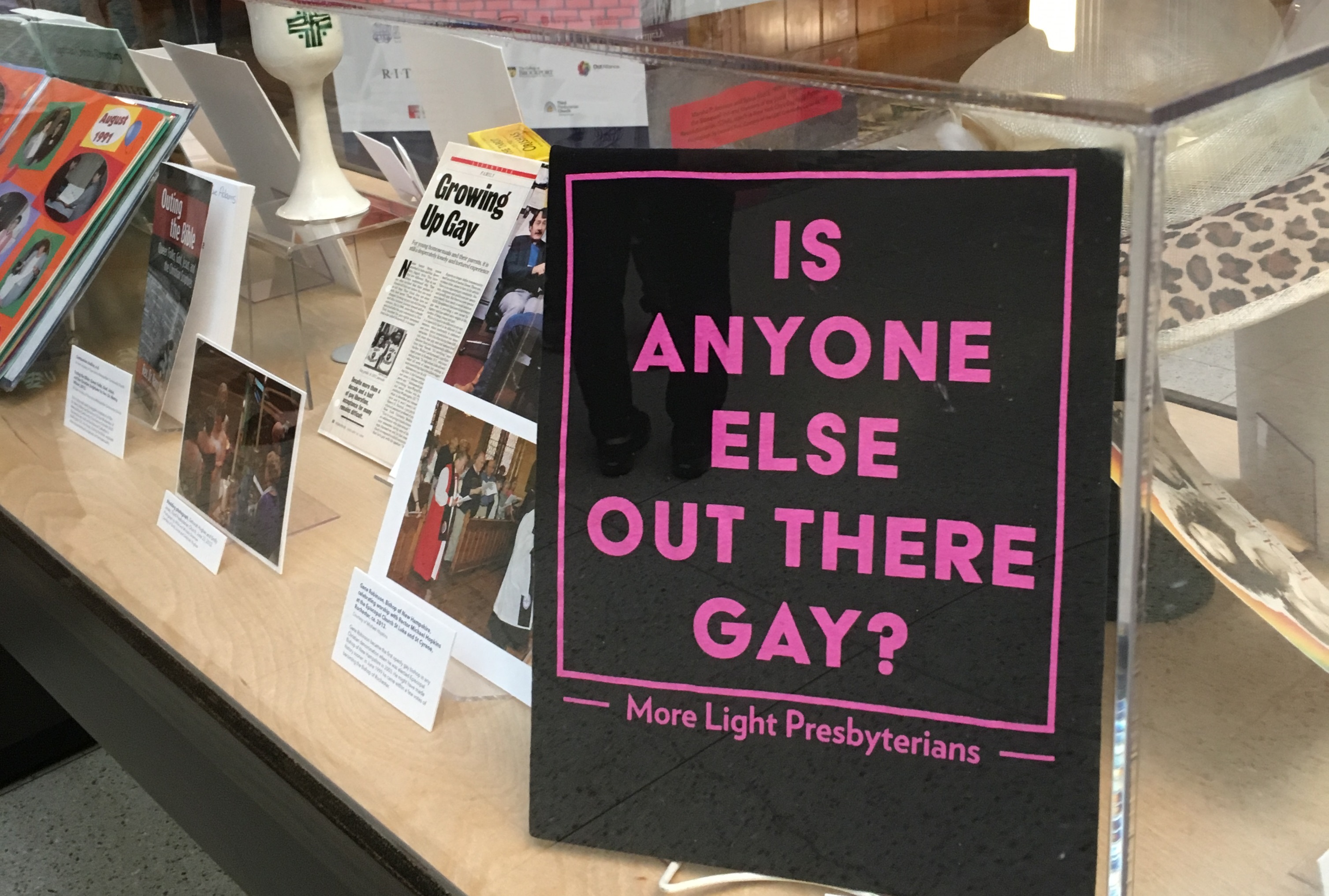 Since announcing the Pam Byers Memorial Collecting Initiative, the Presbyterian Historical Society has received multiple questions about whether or not we have a photograph of this moment. I have searched our archives, looking in Presbyterian publications and General Assembly records from that time period, and have yet to unearth a photograph. Does a photograph exist?

I’ve asked people involved in the movement for LGBTQIA+ inclusion in the Church and have gathered mixed responses. Some swear that they have seen a photograph somewhere of Sindt holding up his sign at the Assembly, possibly in a publication. Others believe that the story has simply been told so many times, and so well, that people have started believing that they’ve seen it with their own eyes. The story is that powerful.

Barry Smith, who serves as the historian of Lincoln Park Presbyterian Church in Chicago and has worked with David Sindt’s personal papers, told me that he has never seen a photograph of the moment and expressed doubt that one exists. He explained that it’s hard to imagine in 1974 that anyone would have taken a photograph of something that controversial. There also simply weren’t as many people taking photographs to begin with. Shortly after Sindt’s death, Barry Smith created a collage with other photographs, newspaper clippings, and paraphernalia from the congregation's own archives to honor Sindt’s legacy in the LGBTQIA+ community and the risks that he took to advocate for a fully inclusive church. The Session of Lincoln Park Presbyterian Church has voted to donate its David Sindt archive to the Presbyterian Historical Society.

It is possible that the photograph exists. I plan to keep searching for it and if you have any information or leads to help with my hunt, please let me know. You can send tips to PHS.

For now, the idea of David Sindt holding up a sign in 1974 that read “Is anyone else out there gay?” serves as a vivid image of the resilience of LGBTQIA+ Presbyterians. It’s a moment to remember and celebrate during this month of Pride.

PHS is actively collecting records and oral history interviews related to the movement to enable ordination and marriage rites for LGBTQIA+ Presbyterians. If you have materials or stories to share, please contact us for more information about contributing to the Pam Byers Memorial Collecting Initiative.