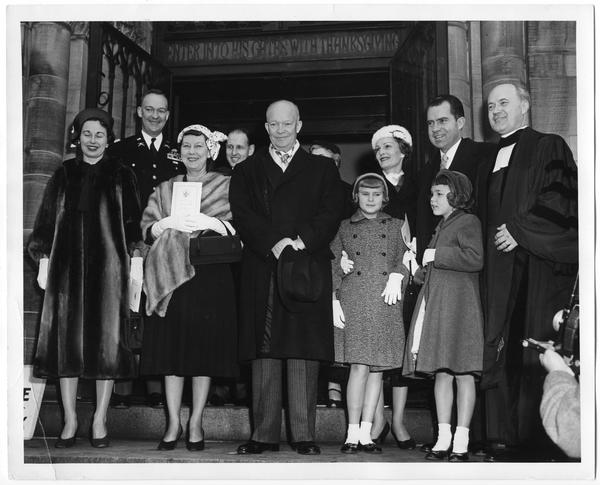 “The business of the church is to put us generals out of business.”

This quotation from the May 1, 1969 issue of Presbyterian Life comes from none other than Dwight David Eisenhower, five-star general, supreme commander of the Allied Forces in Europe during World War II, and 34th President of the United States from 1953 to 1961. While initially religiously unaffiliated, Eisenhower became a devout Presbyterian upon ascending to the presidency. Having experienced the horrors of war up close, his newfound religious faith coincided with his increasingly pacifist leanings, as evidenced by the content of his 1961 farewell address, wherein he coined the term “military-industrial complex” to describe the entwining of big business, the armed forces, and authoritarian politics in American society. 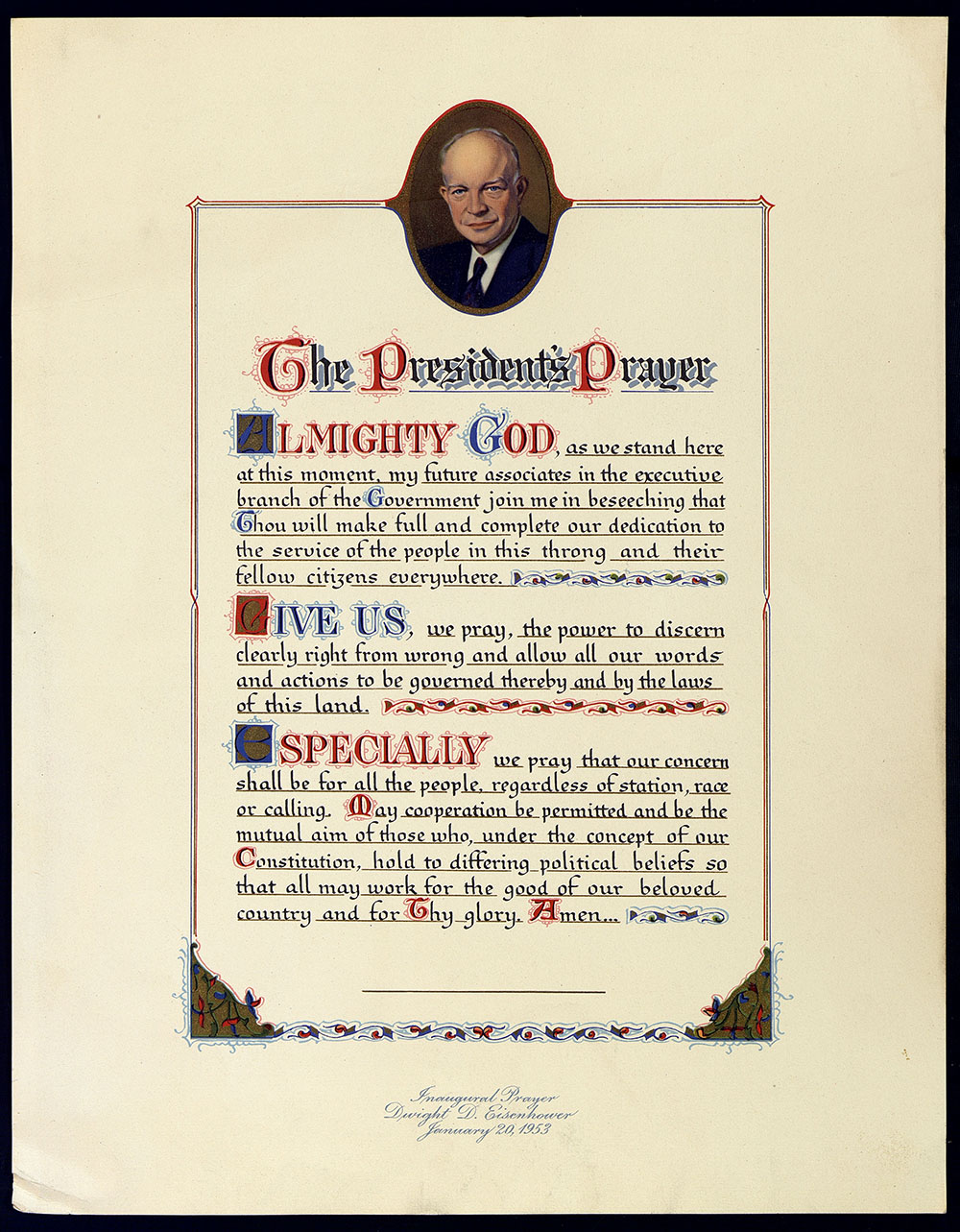 Prior to ascending to the presidency following his election in 1952, Eisenhower was not a particularly religious man, despite his upbringing. His parents were both initially River Brethren (a Mennonite sect), but later became devout Jehovah’s Witnesses; however, their son never formally joined the church. For the entirety of his career in the armed forces, Eisenhower was aloof of organized religion, perhaps since his military service was at odds with Mennonite and Jehovah’s Witness teachings. He would pray in nondenominational army chapels, and would quote scripture during training exercises, but never joined any specific denomination. 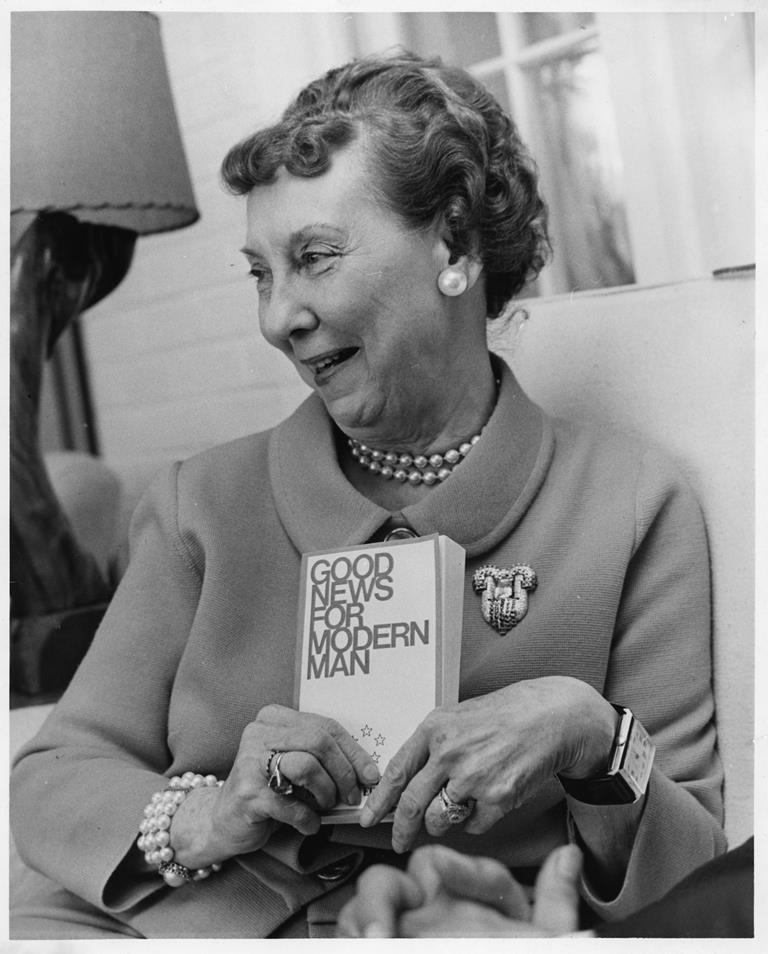 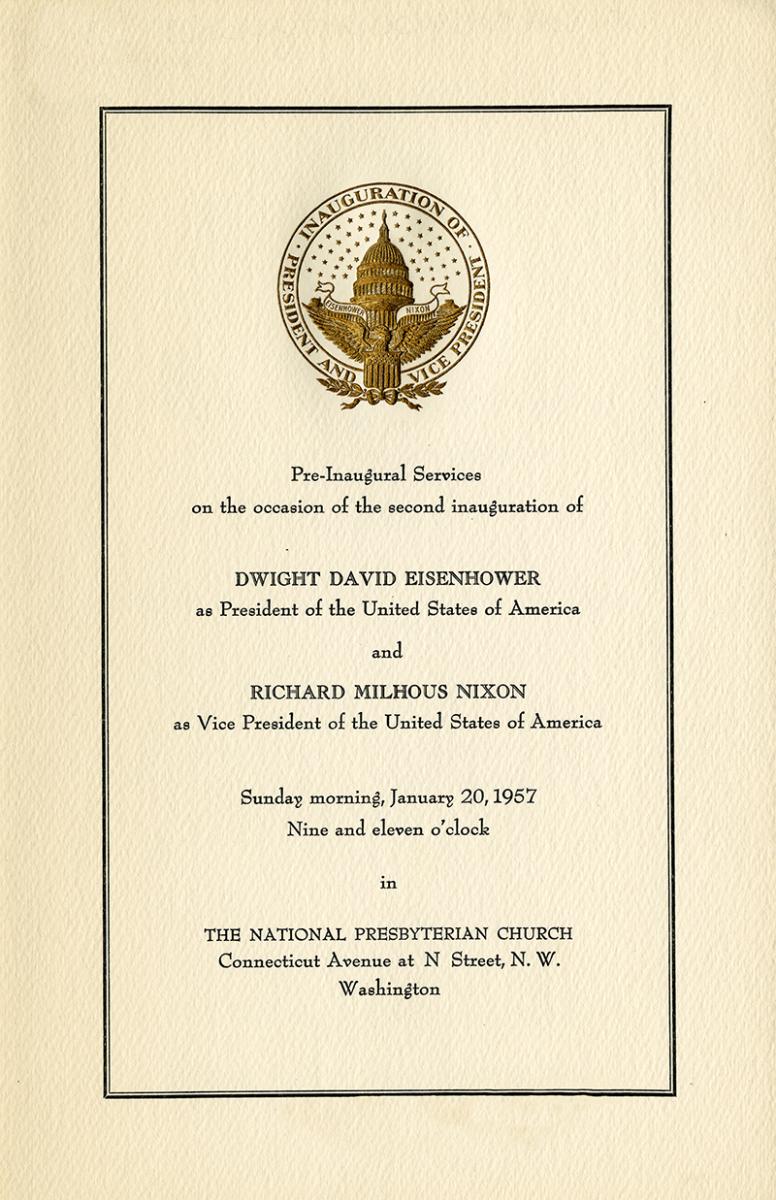 Eisenhower, a moderately conservative Republican, realized the necessity of civil rights for African Americans and other people of color over the course of his presidency—particularly evidenced by his federalization of the Arkansas National Guard in 1957 to protect and accompany the Little Rock Nine, the first nine African American students to attend Little Rock Central High School, in defiance of white supremacists and Arkansas’s segregationist governor, Orval Faubus. At the same time as Eisenhower’s commitment to civil rights deepened, the PCUSA adopted an increasingly liberal opinion on civil rights, especially due to the sizable number of African American Presbyterians. The simultaneous evolution of Eisenhower and the Church’s stances on civil rights can be seen in his attendance of the May 15, 1955 service at the Gettysburg Presbyterian Church in Gettysburg, Pennsylvania, the site of the 1863 Civil War battle that marked the beginning of the Union’s triumph over the Confederacy. Sitting three rows behind the pew once used by Abraham Lincoln, the President and First Lady heard a sermon from the Reverend Clyde Raynor Brown on the Gospel of Matthew, specifically dwelling on the line “A good tree bringeth forth good fruit.” Rev, Brown said that for faith to be worthwhile, it needed to be active in practical worldly matters: “....if a Latin American or [African American] buys a house on your street….would you welcome him as a Christian should?” 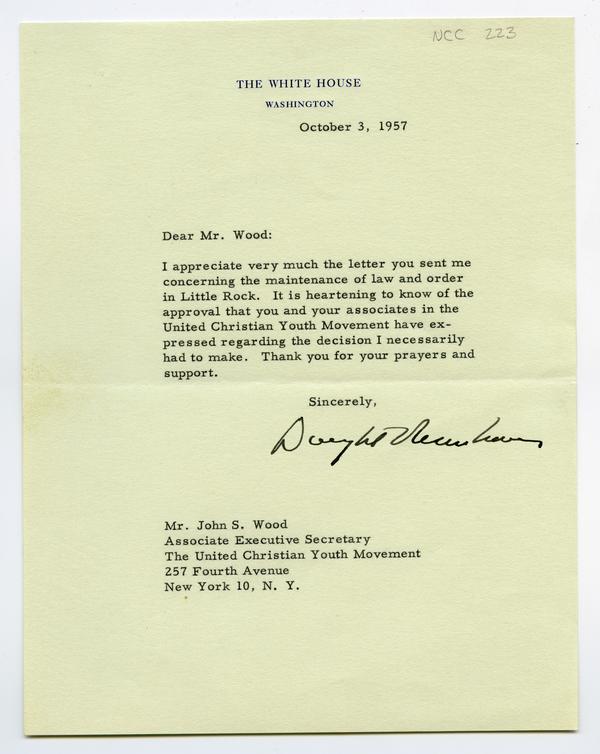 As the world marks the 75th anniversary of the D-Day invasion that Eisenhower led, we should remember that President Eisenhower was horrified by the sheer depravity of combat, saying, “I hate war, only as a soldier who has lived it can, only as one who has seen its brutality, its futility, its stupidity” (Presbyterian Life, May 1, 1969). Christian doctrines of peace and brotherhood—and a more theologically liberal PCUSA—influenced a man increasingly weary of world conflict during his second term in office and his retirement. Despite ordering interventions in the Middle East and Southeast Asia, President Eisenhower became increasingly critical of American military and corporate power; but his own thoughts on the state of America’s world presence would not make themselves known until his farewell address on January 17, 1961, days before John F. Kennedy was set to be inaugurated as the 35th President of the United States.

Taking aim at the American corporate and defense establishment, Eisenhower warned that

“This conjunction of an immense military establishment and a large arms industry is new in the American experience. The total influence—economic, political, even spiritual—is felt in every city, every state house, every office of the Federal government. We recognize the imperative need for this development. Yet we must not fail to comprehend its grave implications. Our toil, resources and livelihood are all involved; so is the very structure of our society.

In the councils of government, we must guard against the acquisition of unwarranted influence, whether sought or unsought, by the military-industrial complex. The potential for the disastrous rise of misplaced power exists and will persist.”

Eisenhower died of heart failure on March 28, 1969, at the age of 78. His funeral service was held at Washington National Cathedral, and he is buried in the chapel of his presidential library near his boyhood home in Abilene, Kansas. He is remembered throughout the nation and the world as one of the greatest generals of World War II and his work for peace after his presidency.

-- Anthony McDonnell is a summer intern at the Presbyterian Historical Society. A recent graduate of the Community College of Philadelphia, Anthony will be enrolling at Temple University in the fall of 2019. His work is a part of the Building Knowledge & Breaking Barriers project.

Lincoln and “Under God”: blog post which mentions Eisenhower