A Modern Church for a Modern World: New Southern Churches of the Doom Era 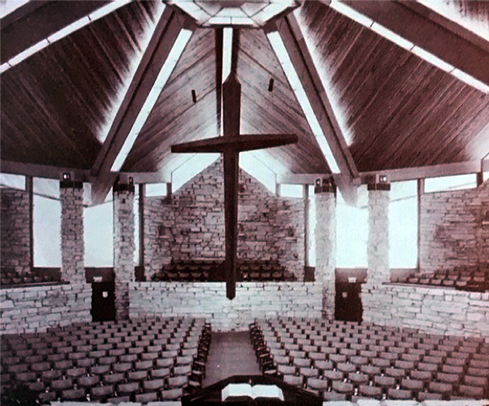 The voluminous sets of records saved by Rev. James L. Doom and the Board of National Ministries, which are now archived at PHS, paint a detailed picture of the influences on the designs of post-World War II Southern Presbyterian churches, as we began to discuss in a previous blog post. Doom’s office files were divided into two major categories: architects and congregations. The architect files document Doom’s correspondences with architects and craftsmen, such as stained glass artists, while the congregational files document Doom’s communications with congregations.

The evolution of Southern Presbyterian Church architecture in the period following the Second World War is comprehensively documented in the 41 boxes of RT 777, Records of the Presbyterian Church in the United States, Board of National Ministries, Department of Church Architecture. Arranged by state, and then alphabetically within each Southern state, this set of records consists of files for individual congregations.

Doom’s correspondences, in which he is offering his office’s services to any planned congregational building program, are usually confined to the narrower files. Thicker files tend to document the entire history of a construction effort. They include one or more congregational planning document, a discussion of architect selection, plans, and renderings of the proposed design, with Rev. Doom’s comments following review, dedicatory materials, and in a few cases, press clippings.

Although Rev. Doom was careful not to dictate the employment of a particular architectural vocabulary for any church construction project, his writings and speeches clearly displayed his partiality toward a modernist ecclesiastical design language. Among the ecclesiastical architects whom he respected the most was Edward Sovik, a Lutheran architect who wrote the book, Architecture in Worship. Sovik was one of several Midwestern architects who introduced the A-frame design to post-World War II American church architecture.[1] 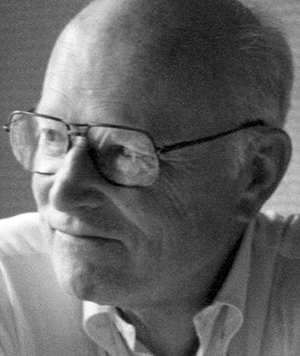 Doom communicated with hundreds of congregations during his years as denominational church architectural advisor. A few examples depict the variety of designs of Southern Presbyterian churches designed and built in the period following World War II. These designs are documented by information in Doom’s office files and in the files of the Department of Church Architecture. 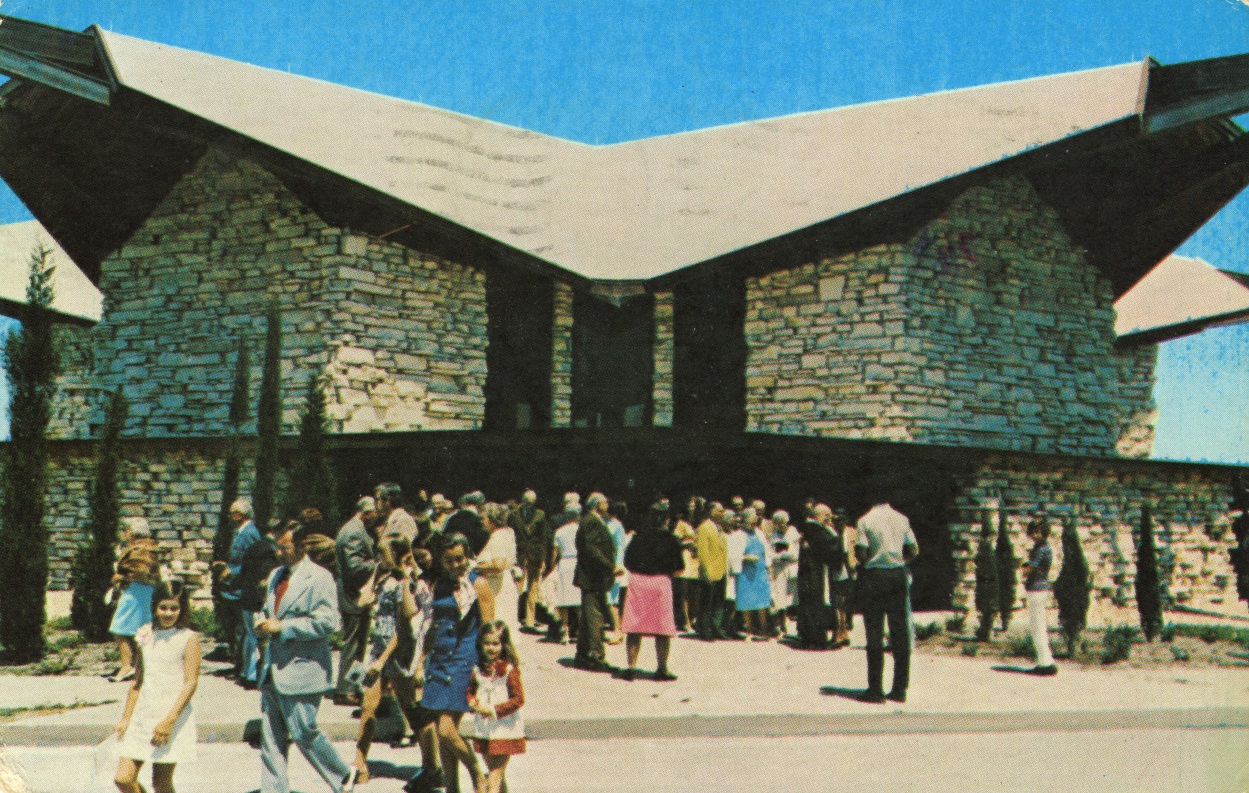 The rationale for the design of the Christ Presbyterian Church in Largo, Florida, is contained in an article from the April 1968 issue of Florida Architect, archived in the files of Rev. James L. Doom:

The story of this church is the story of the minister and the people who wanted to give their place theological expression by commemorating the message and the mission of Christianity. Three of the four articulate and working members of the church formed a small committee with the minister to determine what they had to say about the unique revelation that was theirs as Christians in their building. Much of what they delineated was symbolic in a very basic sense; the plan in the form of the six pointed creator star popularly identified as David’s Star, recognizes the familiarity of the Old Testament faith; the rough-hewn stone speaks of God’s creation over millions of years; the cedar decking is the same species used in Solomon’s Temple; the transparent windows look upon the secular world and where the mission of the Christian lies; the cloud of witnesses (Hebrews 2:11) located on the ledges of the stone walls (approximately 72 busts of men through which the word of God has come) are all highly defined, non-abstract and solidly entrenched symbols.

Christ Presbyterian was also notable for its flexibility. The center of worship could move from transept to transept, in accordance with the six seasons of the ecclesiastical year. The design of the church was intended to make the congregation participants in, rather than spectators to, the worship.[2] 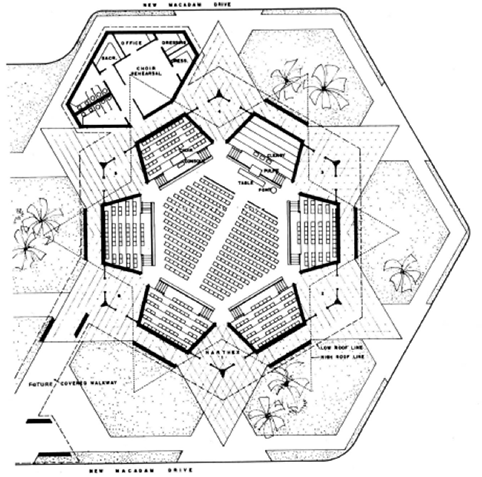 The church’s primary architect, Harold E. Wagoner (1905-1986), a native of Pittsburgh, received his architectural training at the Carnegie Institute of Technology, the University of Pennsylvania, and also at the American Ecole des Beaux-Arts in Fountainbleu, France. Immediately after graduation from the Carnegie Institute, Wagoner was employed by the Methodist Bureau of Architecture, an experience that led him into a career in ecclesiastical design. 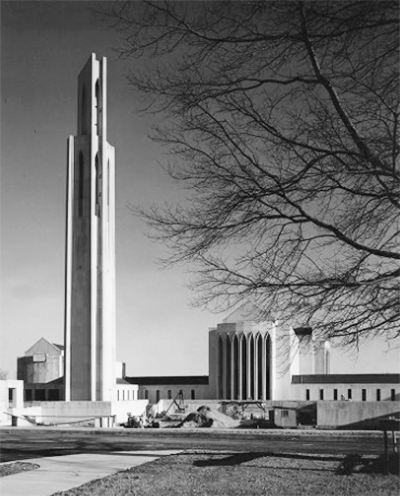 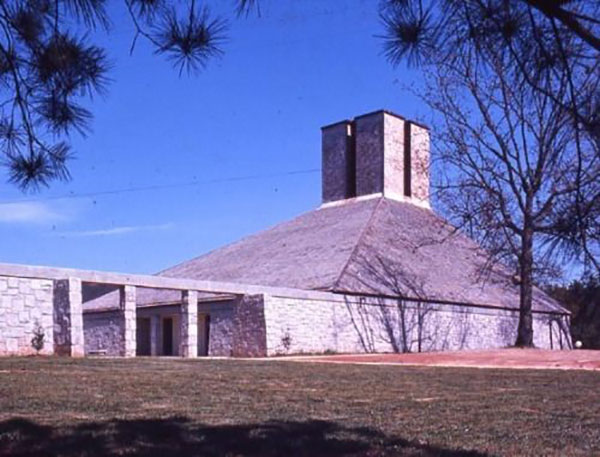 The design of the John Knox Presbyterian Church was awarded a 1968 Honor Award from the American Institute of Architects. An article in the AIA Journal described the church:

As the first phase of new construction for a total religious plant including two existing buildings, the congregation requested a dignified and unpretentious design incorporating only that decoration which is a functional part of the worship service. The architects attempted to achieve an intimate atmosphere by establishing two “meeting rooms,” an exterior court and the church itself, the former acting as a transition from the street and from the rear of the complex. The concept of the sanctuary was based upon the emphasis of the service so that out of the communion table-pulpit area rises the structure as well as the visual alignment of the U-shaped seating arrangement. The result, in the eyes of the jury, “is a simple, forthright and unpretentious statement of the small parish church." Its thoughtful craftsmanship contributes significantly to its quality.[4]

Toombs, Amisano and Wells formed in 1955 and was responsible for the design of numerous Atlanta landmarks from the 1950s through the 1980s. The firm’s founding member, Henry Johnston Toombs, was born in Georgia in 1896 and attended the U.S. Naval Academy, followed by the University of Pennsylvania, where he received his B.S. and then his M.A. in architecture. James Edwin Wells, also a Georgia native, was a 1930 architecture graduate of Georgia Tech. His architectural career spanned from 1937 to 1974. The firm’s third partner, Joseph Amisano, was a Bronx native who received both his undergraduate and graduate degrees in architecture from the Pratt Institute. He worked from 1954 to 1986 and was the he chief designer of the John Knox church.[5] 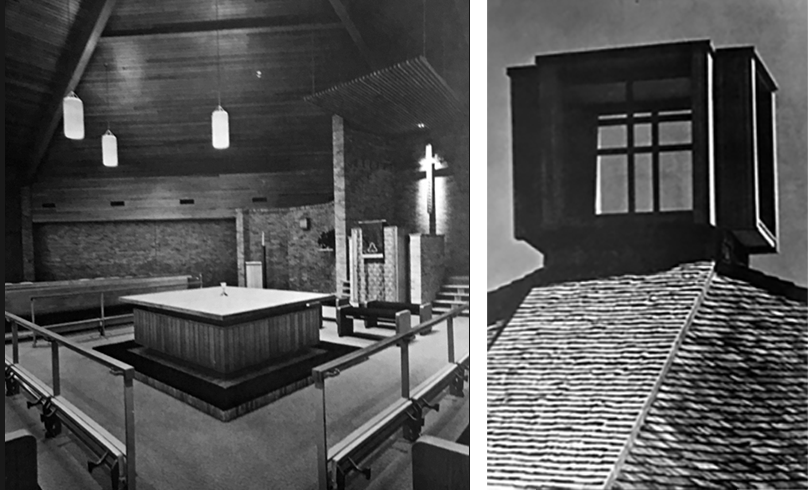 The massive, window-less structure of Saint Andrew Sanctuary looms like a fort on a 1 ½ acre rock knoll. Its warm colored, textured brick walls and rough wooden shingles blend easily with the surrounding live oaks and mesquite.

The church’s interior features a central communion table that is located directly beneath the cupola. At one end of an axis through the communion table is the pulpit; at the opposite end, the choir. The pulpit is slightly raised and to its rear is a brick screen forming an alcove. To either side of the pulpit are alcoves, one for the baptistry font and the other for floral arrangements. The sanctuary is faintly lit by natural light, which enters through the lantern located above the communion table. Artificial light is supplied by rheostat-controlled plastic and wood cylinders lit by fluorescent tubes, which are set in light troughs along the walls.[6] 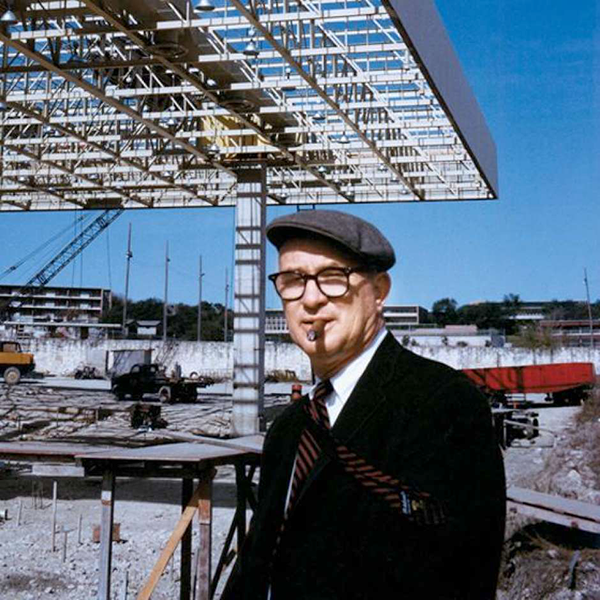 O’Neil Ford was one of the leading mid-twentieth century architects in Texas. Born in Pink Hill, Texas, he attended an elementary school with a progressive curriculum. After his father’s death in a railroad accident, the young Ford became the family breadwinner at age twelve. His only formal architecture training was a basic course earned through the International Correspondence School. Nevertheless, O'Neil Ford went on to have a distinguished career, designing a wide variety of buildings both in partnership with a firm and while practicing on his own.[7]

Ground was broken for the Westminster Presbyterian Church’s hexagonal sanctuary in the summer of 1967. Previously, the sanctuary had been divided in half by a semi-permanent wall. Then, membership grew to the extent that additional space was required. The form of the sanctuary represented the fellowship of believers, with seating on three sides of the focal point: the communion table, pulpit, and baptismal font. 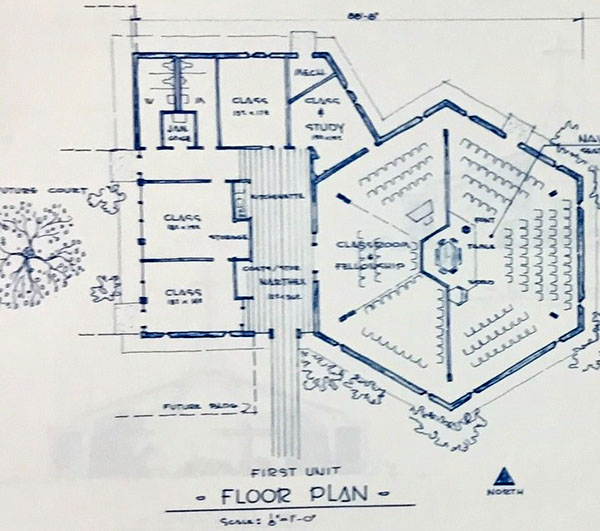 The architect of the church, Wilbur Thomas Harris (1922-), was born in North Dakota and attended North Dakota State University. Harris designed the building to complement the New Mexico terrain and the culture and art of the Native American Indians and Latin Americans. The sanctuary was designed with a strip shingle roof to the center point, which features an exterior cross and overhead lighting. Narrow windows reached from ground level to the eaves. The exterior was clad in stucco, while the interior flooring was clay tile.[8]