Story of an RNS Photo: The Anniversary of the Liberation of Dachau 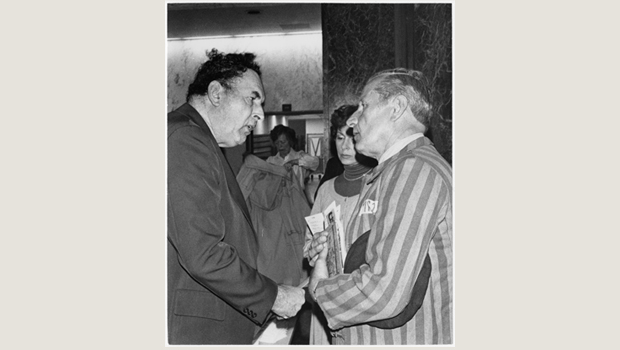 U.S. Army Infantry Squad Leader Oliver Davis Collins talks with Julian Noga, a former slave laborer at Flossenburg Concentration Camp.
Last year, PHS completed the Religious News Service digitization pilot project. With support from the National Endowment for the Humanities, we were able to scan nearly 500 photographs from the Religious News Service photograph collection and add them to our digital collection in Pearl.

Early in the project, I scanned photographs from the 1980s. So why, I asked myself, did I find an image of a man wearing a concentration camp prisoner’s uniform in 1980? The picture was accompanied by not only a caption, but a draft of the article it ran with. Months after I scanned the photograph, I couldn’t stop thinking about that story. It’s one that should be remembered as we reflect on  the 75th anniversary of the liberation of the Dachau concentration camp. 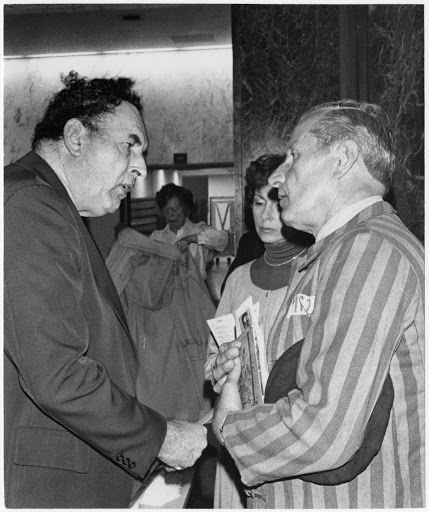 Dachau, which dates to March 1933, was the longest operating concentration camp in Nazi Germany. Along with the shared horrors faced by prisoners in camps across Europe, Dachau served as a training center for SS concentration camp guards. It was used as the example for all other camps to follow.

On April 26, 1945, there were 67,665 registered prisoners in Dachau and its sub-camps. That same day, more than 7,000 of those prisoners were forced on a death march from Dachau to Tegernsee, over 70 kilometers away. The German officers shot any prisoners who could not keep up while many other prisoners died from exhaustion, hunger, or the cold. Four days later, on April 29, the U.S. Armed Forces liberated Dachau. As they approached,  soldiers found over 30 railroad cars filled with bodies in an advanced stage of decomposition. The prisoners who survived the death march were not liberated until early May. Between 1933 and 1945, over 188,000 people were incarcerated in Dachau and its sub-camps and an estimated 41,500 were killed, though the exact number may never be known. 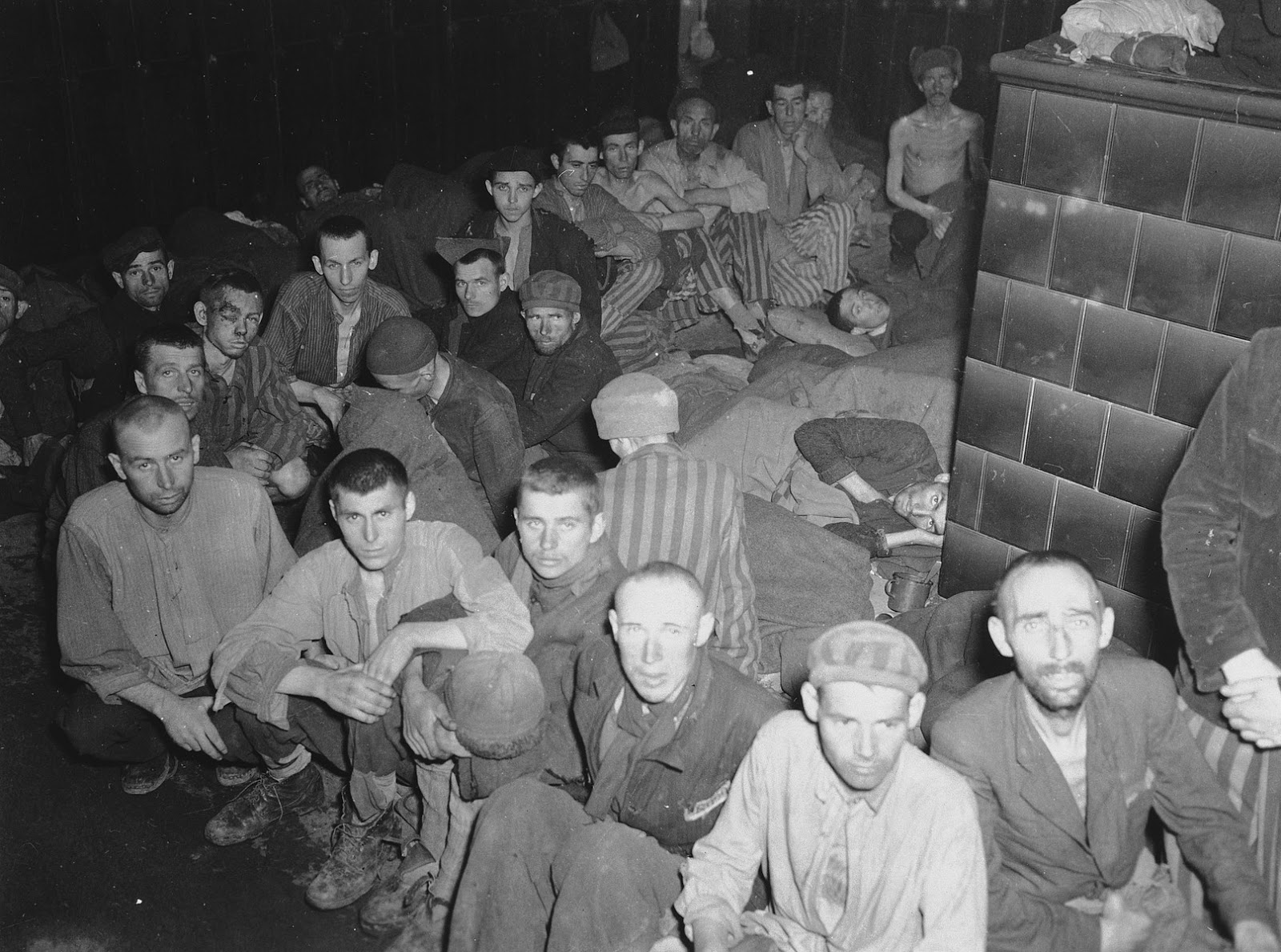 Julian Noga—featured in the RNS photograph from 1980 wearing his prison uniform and speaking to Oliver D. Collins, an American veteran and liberator of Dachau—was freed by American soldiers during a death march from Flossenburg. The march, initiated on April 20, 1945, forced Noga along with 16,000 others to move from Flossenburg to Dachau. Had the prisoners arrived at the planned destination, they would have traveled over 200 kilometers without food, water, or rest. 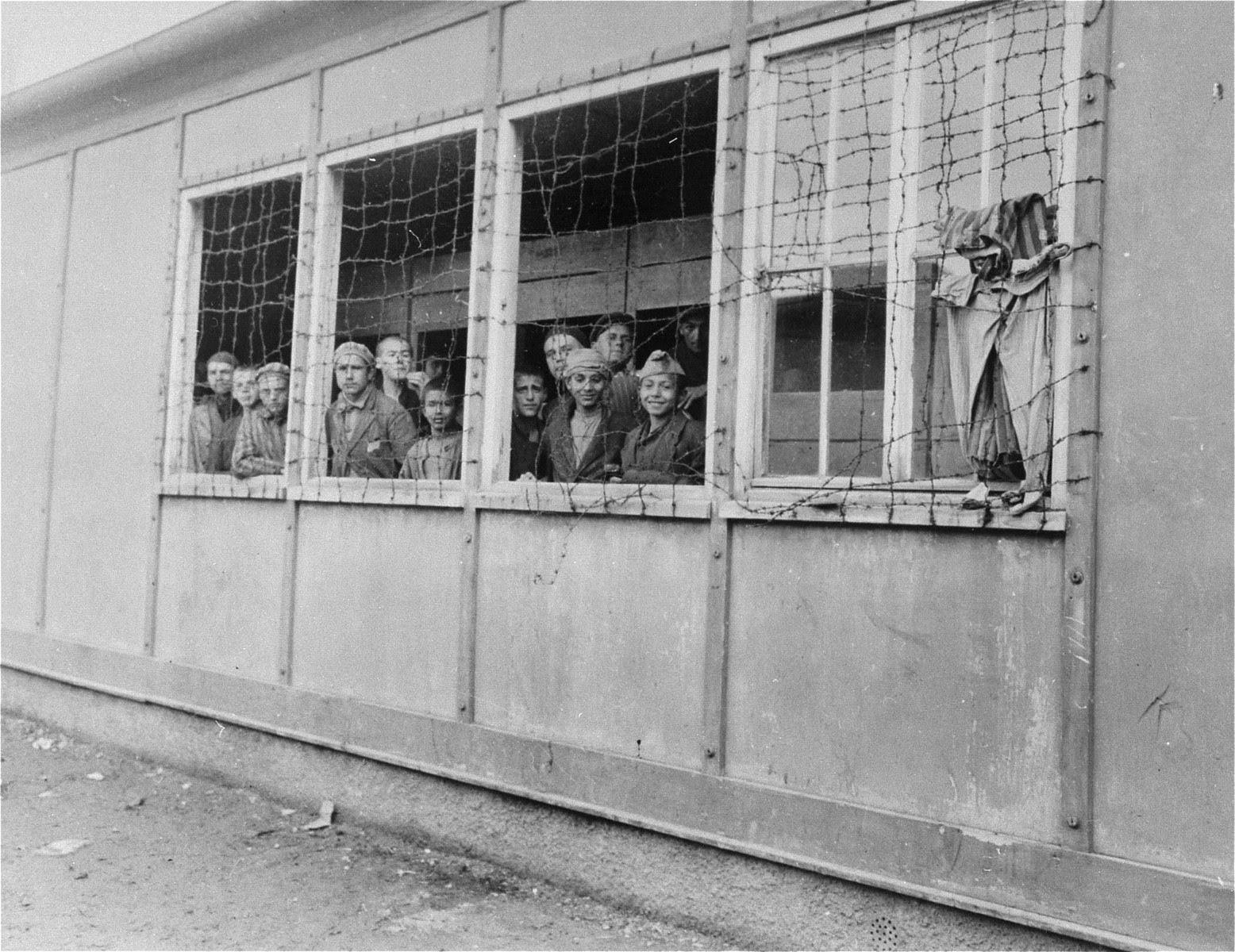 Thirty-five years later, the featured RNS photograph was taken at the anniversary of the liberation of Dachau held in Albany, NY, and sponsored by the Polish American Congress, Central District of New York State. It was a day of remembrance and interfaith prayer where survivors and liberators joined together. According to the article accompanying the photograph, most of the survivors at the event were natives of Poland. There were also clergymen from several denominations and New York State politicians. Speakers focused on the atrocities of the Holocaust and the impact on Poland, which lost approximately a fifth of its population during Nazi occupation. Some survivors spoke of their experiences. Others, like Rabbi Paul B. Silton, encouraged those in attendance “to bring to justice the Nazi war criminals now living freely in America.”