Guidelines for Writing an Anniversary History of Your Congregation 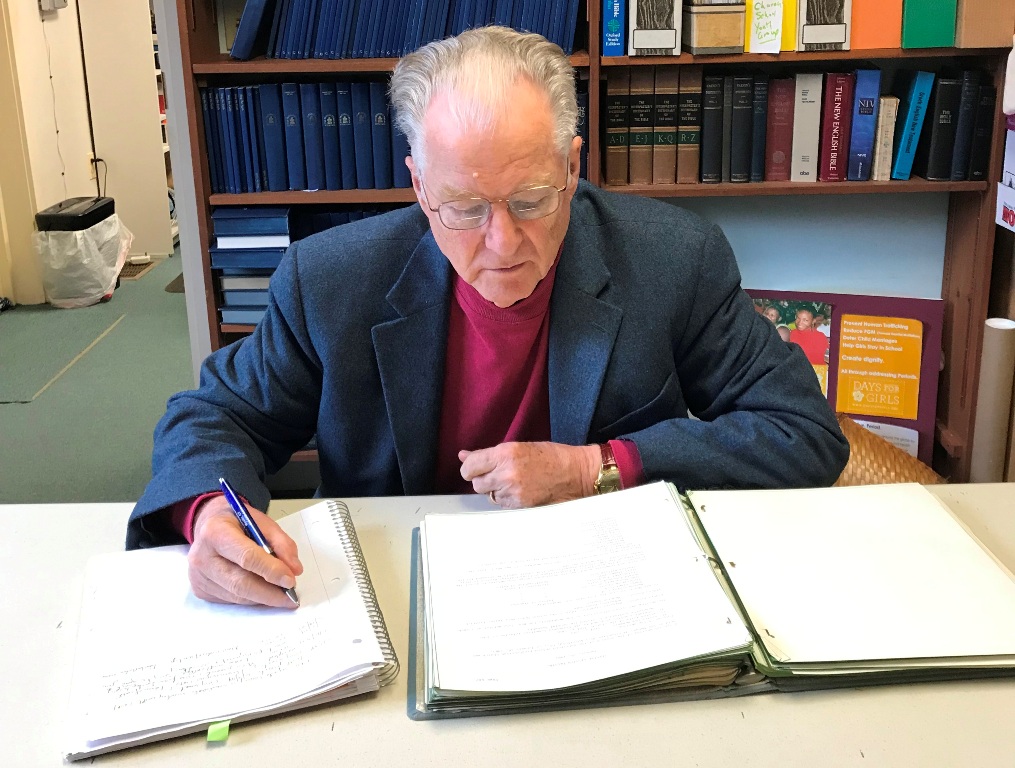 The author working on a church history

1. Get started early. Chronologies of important events in the life of the congregation can be written fairly quickly and easily. Histories that connect events together and take note of significant continuities and changes over the years require more research, more reflection, and a lot more time. Therefore plan to get started at least a year in advance of the anniversary date.

2. Form a history committee. Even if one person is given the responsibility for writing the history, that person is going to need help on three key matters. A committee helps decide what kind of history would be best for the congregation in the upcoming anniversary year; it can also be a great help in gathering relevant source materials. Finally, a history committee can review the manuscript periodically as it is being written to check for errors, important omissions, unnecessary detail, and improved phrasing. If portions of the history have been assigned to different authors, a committee performs an invaluable coordinating and integrating function.

3. Pay attention to context. No congregation is an island unto itself; it is affected by its context, drawing members from it, and in turn having an impact upon that context. Three contexts are especially important to consider in writing a congregational history. The first is the changing community--be that a village, town, or city--within which the congregation is set: its changing economy, population growth or decline, diversity of occupations, levels of formal education, culture, ethnic groups, and religious organizations. A second context is provided by the denomination and the theological, ethical, and missiological issues it is struggling with. The third obvious context is the nation itself, especially if a war, an economic downturn, or major social movements affected the country or the region as a whole. Secondary sources such as local histories, denominational histories, and general histories either of Christianity or of the United States can be consulted for information about these contexts. 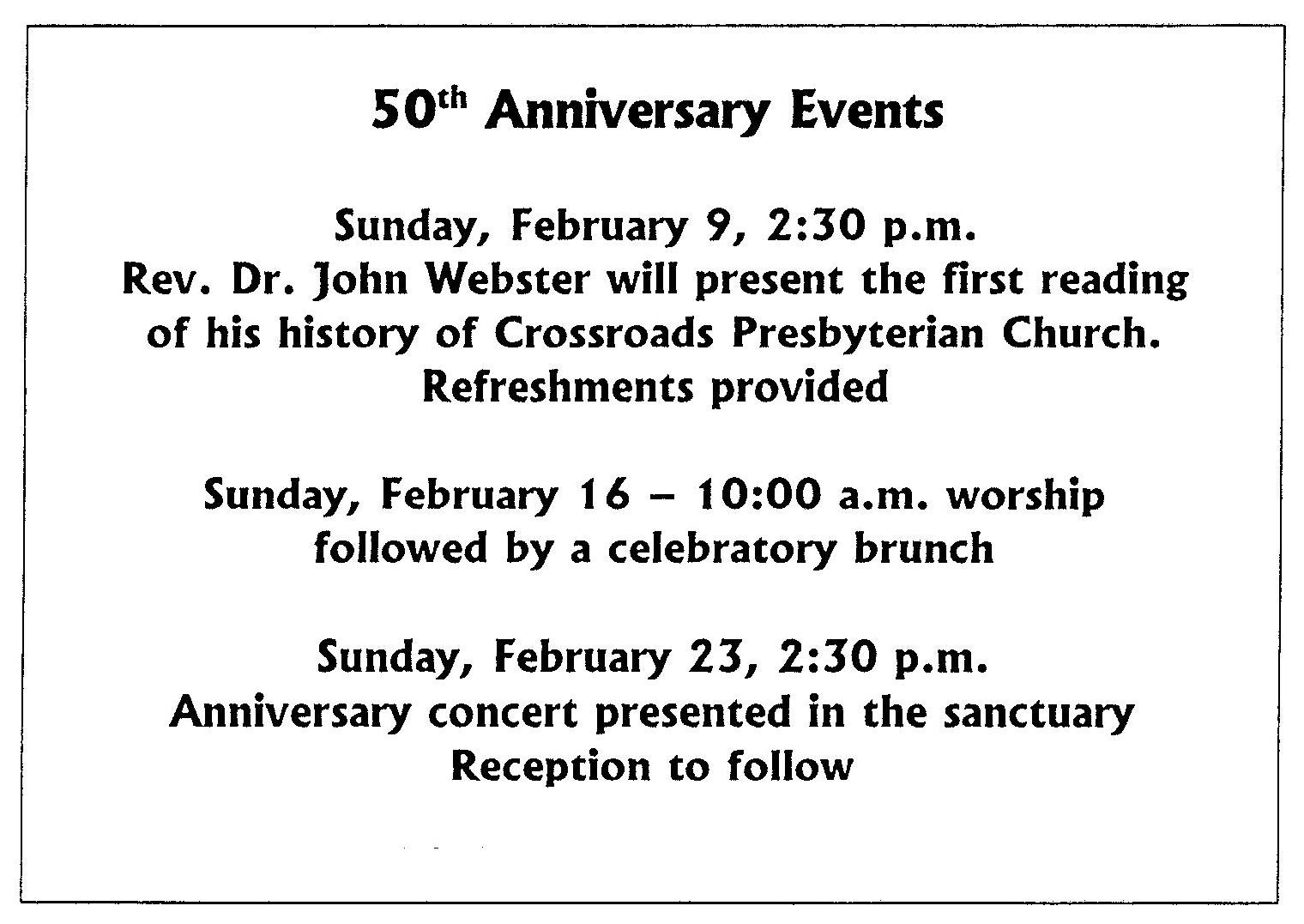 4. Select a focus. Not everything that happens is of equal importance. What is central to the congregation’s story down through the years? Perhaps the best answer to that question can be found by taking a close look at the foundational period of the congregation’s history (say, the first five to ten years) to find out who (in terms of ethnicity and occupation) the original members were, why they started a new church together, as well as how they defined themselves and their reason for being as a congregation in those early years. This should give a clue to the course they set for themselves, as well as to how they put that vision into practice, and why.

From there on one’s research could focus on whether, and in what ways, the congregation changed or remained basically the same with regard to its membership, the articulation of its vision, as well as how it sought to put that vision into practice as times changed. This line of inquiry would lead to a focus upon the nature of the congregation’s changing social and Christian identity within the wider community, how they saw themselves over time, and how they chose to live out their collective vocation together in practice. Congregational identity has been shaped and defined not just by theological affirmations and mission statements alone, but also by highly controversial denominational and national issues which individuals and congregations have dealt with in differing ways: e.g., slavery vs. abolitionism, modern scientific and historical methods of establishing truth, prohibition, abortion, patriarchy, gay ordination, and same-sex marriage.

Of course identity is not the only focus the history committee might choose to adopt, but it does provide a useful starting point. Both context and focus provide criteria for determining what should be included in the history (with how much emphasis) and what might safely be overlooked.

5. Examine your source materials. The congregation’s annual reports are generally the most informative sources available and so provide a good starting point for research. To this basic source some others should be added: session minutes, church newsletters, and clippings from local newspapers. Two sources that one might not consider but which I have found to be invaluable are the Church Information Forms congregations prepare when seeking a new pastor, and church brochures, whether written for fundraising purposes or for introducing newcomers to the congregation. Both reveal a lot about how the congregation sees and presents itself. Congregations seeking to develop a church archive should preserve all these records and authors should reference them in footnotes or endnotes in the congregation’s history.

Research need not be confined to church archives alone. Denominational archives may also contain valuable source materials that provide supplementary information and important insights into the congregation’s history. To cite two examples from my own experience, I found the letters Baptist congregations sent to their regional associations, and the associations printed together with the minutes of their annual meetings each year, a valuable source of nineteenth century history available not in the church archives but in the archives of the American Baptists of Connecticut located in Hartford and of the American Baptist Historical Society located in Atlanta. In trying to get at the origins of the Presbyterian church whose history I was writing, I found in the archives of the Presbyterian Historical Society in Philadelphia the session records of a neighboring church, as well as invaluable new church development materials from the foundational period of its history, both of which presented a somewhat different view of how the church got started than had been generally accepted within the congregation.

6. Choose a structure for your history. Historians generally use either a chronological or a topical structure for their histories. The basic divisions, which provide the historian’s working units, in the former structure are determined by what the historian (or history committee) perceives to be the distinct periods or phases the congregation has gone through in the course of its history. The transition points dividing one period or phase from another may be marked by a national event (e.g., a war, a recession) or by events internal to the congregation’s life (e.g., a change of name or address, a new building, a revival, a denominational initiative with a major impact). Changes in pastoral leadership work well as such transition points when the congregation’s history is not too long and the pastors’ tenures are not too short; otherwise this kind of periodization can almost guarantee tedious reading.

The topical structure follows the annual report pattern by dividing the congregation’s life into segments and treating each separately as well as chronologically (e.g., Sunday worship, Christian education, outreach, etc.). This may be easier to manage but it lacks an integrating focus. 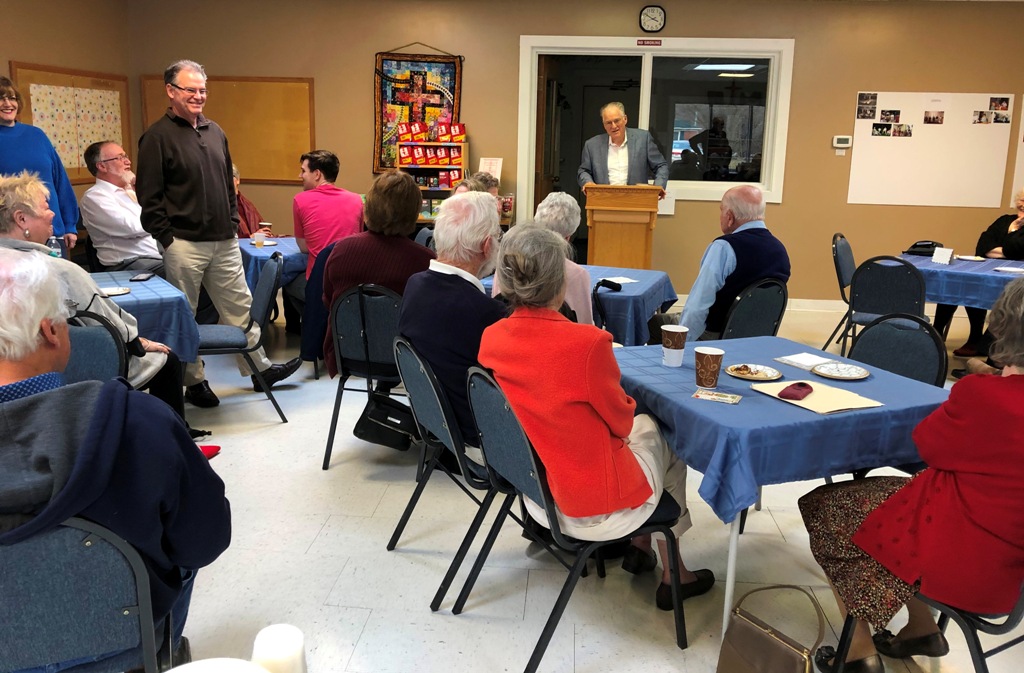 Involving the wider congregation in a discussion about church history

7. Review the evolving manuscript periodically with the history committee. The committee may meet regularly (monthly, quarterly) to assess progress and offer needed help, or it may meet irregularly when there is progress to assess and/or when the need for help arises. Thus the committee serves as a source of encouragement to the author(s) and as an assurance of the congregation’s ownership of the history. As the writing nears completion, the committee may wish to offer advice on what might be included in an appendix, whether and which photographs might be included, and how the history might best be presented to the congregation as a whole.

8. Involve the congregation. There may be individuals in the congregation with knowledge, and even written sources of information, about the church’s past. Beyond that, there are ways to tap into the congregation’s collective memory. In two congregations I studied the history committee sponsored a lunch for old-timers following Sunday worship. I had some questions I needed answers to: What was the church like in the 1950s? In the 1970s? Why was there a sharp drop in church membership during a particular ten-year period? These questions provoked considerable discussion and a collective memory did emerge from those gathered that was then included at appropriate points in the history. It also stimulated considerable interest in the history being written.

When the history was completed, at least in draft form, it was shared with and discussed by the congregation. These conversations made the whole effort worthwhile, because the congregation quickly recognized that their past had a bearing upon the future (which they were in the process of creating) and so were eager to learn from it. Involving the congregation in discussion of a draft before the final version is completed can also help those who are writing the history be aware of what members of the congregation think is significant in and about its history. That may well shape what the final version includes and excludes, as well as how it is written.

When your church history is finally completed, make copies available to members and friends, as well as to denominational historical archives, and keep some for future members of the church also.

--The Rev. Dr. John C.B. Webster was a Presbyterian missionary in India, where his academic specialty became the history of Christianity in India. Back in the U.S.A., he was Visiting Professor of Church History and World Mission at Pittsburgh Theological Seminary and then Pastor of Crossroads Presbyterian Church in Waterford, CT. before his final assignment before retirement as a diaconal worker in India.

"Writing a History of Your Church,” by L.C. Rudolph

Planning for your church anniversary