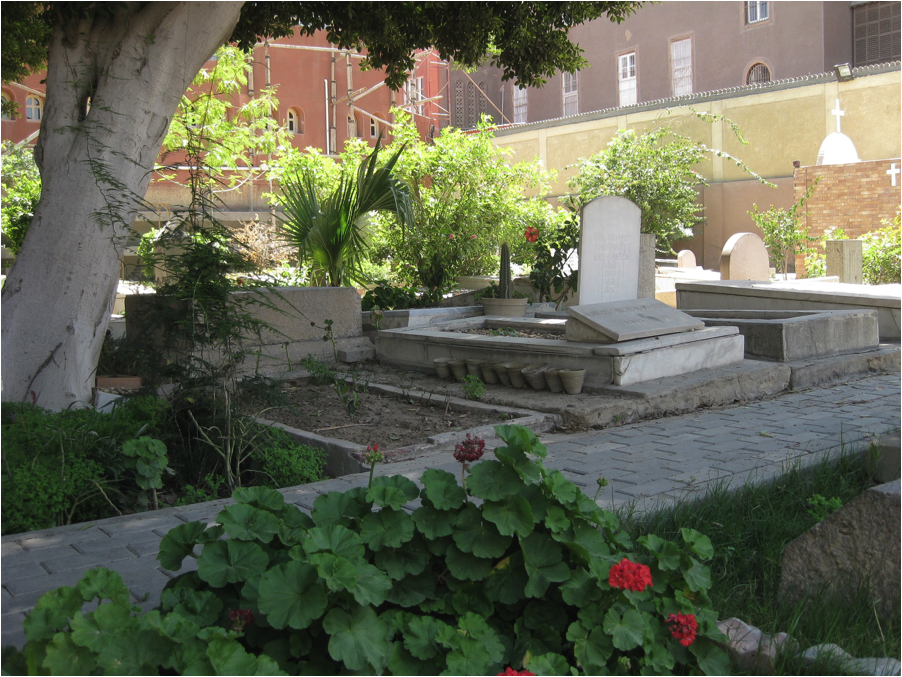 Andrew Watson, (1834-1916), an American missionary born in Oliverburn, Perthshire, Scotland, and educated in Waukesha, Wisconsin, wrote in his 1897 book The American Mission In Egypt:

A petition was presented to his Highness Ishmael Pasha begging him to give us a free grant of a piece of desert land in the region of Old Cairo . . . . It was not long before he, through our Consul, informed the Mission that the request was granted and that the proper papers would be given by the department of public works  . . . . the matter was not pushed for a long time. I was the only male missionary in Cairo at that time, and I am sure I must have gone to that particular office 20 times before the order was issued and permission was given to erect the walls. The plot is 50 by 100 meters.  A subscription paper was prepared and money gathered from residents and travelers to the amount of over $1,500 and with this and some additional sums a wall around the lot and 2 rooms were erected. Trees have been planted which give grateful shade from the burning sun, and some other improvements have also been made to make the place appear less desolate looking. Many at the date of writing, have been buried in it, Americans, Germans, French missionaries, Egyptians, Armenians and others.

Resulting from Andrew Watson’s patience and persistence from 1885 to 1880, the land for the American Cemetery in Cairo was acquired. 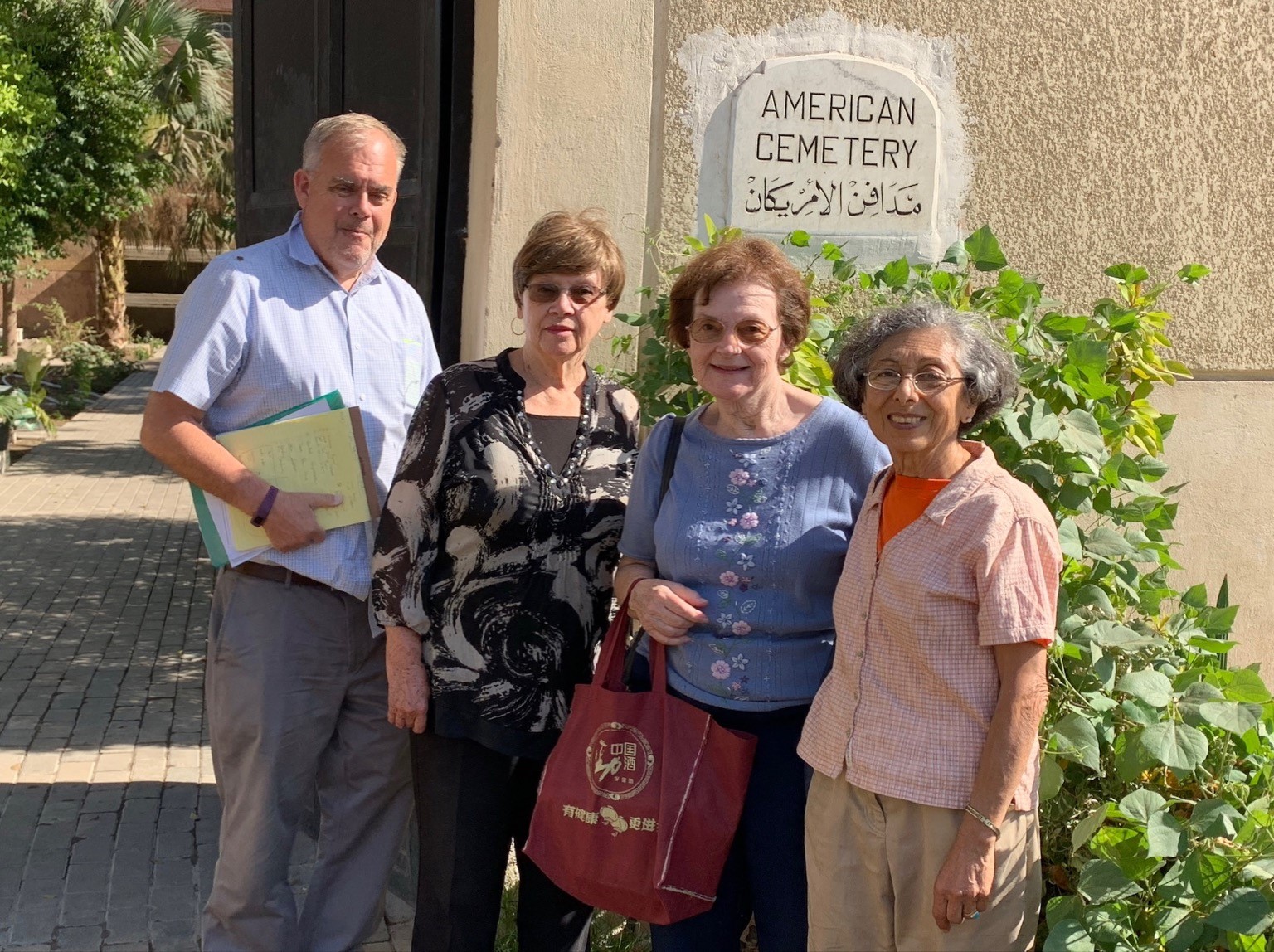 In the late 1960s, the American Cemetery, along with other American Mission properties, was turned over to the Evangelical Church of Egypt (Presbyterian–Synod of the Nile). The Synod continues to be responsible for the maintenance of the American Cemetery today, which continues to be the final resting place for many Americans and persons of other nationalities and all walks of life who pass away and are interred here.

In 2011, a group of friends from St. Andrew’s United Church in Cairo went to visit the grave of the long time missionary, teacher, and ethnomusicologist, Dr. Martha A. Roy. All were horrified to see the condition of the cemetery, which was not only overgrown and strewn with trash, but which also contained many damaged gravesites. 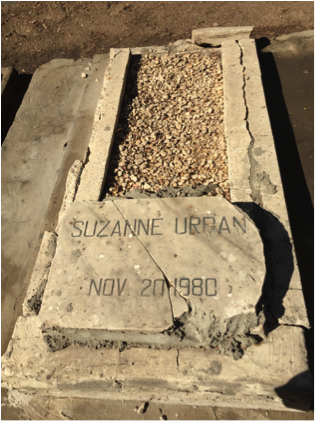 The group decided there and then that it was time to restore the American Cemetery. They resolved to make it the lovely resting place that it was founded to be in the honor of all those who had given so many years of their lives for the benefit of the Church and Egypt, including the missionaries Anna Y. Thompson, Leni Dirksen, Kathy Lorimer, Ann Weir, William Whiting Borden, Andrew Watson, Dr. and Mrs. Lansing, Mrs. John Giffen, and many others; the researchers George Andrew Reisner and John Gasperetti; the artist James Lee Byars; and educators, including Christopher Thoron, Charles Clarence Adams, Martha A. Roy, Judith Gary, Deodaat Breebaart, and Emma D. Cushman, et al.

The group first formed a committee named “Friends of the American Cemetery.” The committee began its plans for restoration work in 2011. Since then, the committee has repaired numerous grave markers and has had six new gravestones made; several others are now being completed and will shortly be installed when the Covid-19 pandemic comes to an end. 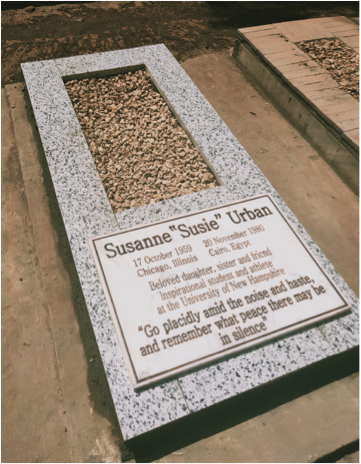 Other individuals and organizations have contributed to the work of restoration as well. Thanks to the generosity of Archbishop Mouneer Anis of All Saints’ Cathedral in Zamalek, for example, a beautiful new gravestone for William Whiting Borden (of Yale) is now in place. Also, with the help of the nearby Abu Sefein Convent, paved walkways have been laid between the rows of graves and a new guesthouse--containing a bathroom, a kitchenette, and a room for conferences--has been erected on the premises. Furthermore, we are very grateful for the help of Ms. Lisa Jacobson, Senior Reference Archivist at the Presbyterian Historical Society in Philadelphia, for locating and sharing biographical information about many of the individuals buried in the American Cemetery. All of this information will be added to our website when our committee members are once again in Egypt, and we are able to implement it.

In March 2018, the President of the American University in Cairo (AUC), Francis J. Ricciardone, paid a more than hour-long visit to the Cemetery. He expressed specific interest in the educators who rest there, several of whom were prominent AUC professors. Later that month, the youngest group of Girl Scouts, the Daisies, came with their leader, Ruth Anne Stevens-Klitz, of the American Embassy. They decorated the graves with pots of flowers that they had grown from seed. They also cleaned and tidied in the area. 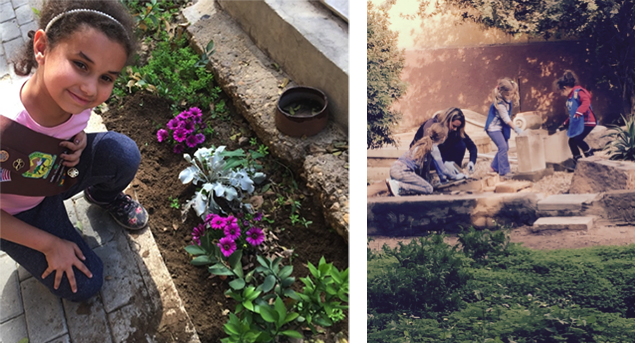 Left: A Daisy Scout Decorating Gravesites in the American Cemetery, Cairo; Right: Group of Daisy Scouts and their Troop Leader working in the Cemetery. Image Courtesy of Jean Isteero.

Then, in May of the same year, a Boy Scout who was working toward his Eagle Scout Award came with a group of friends and spent much of the day cementing broken gravestones. 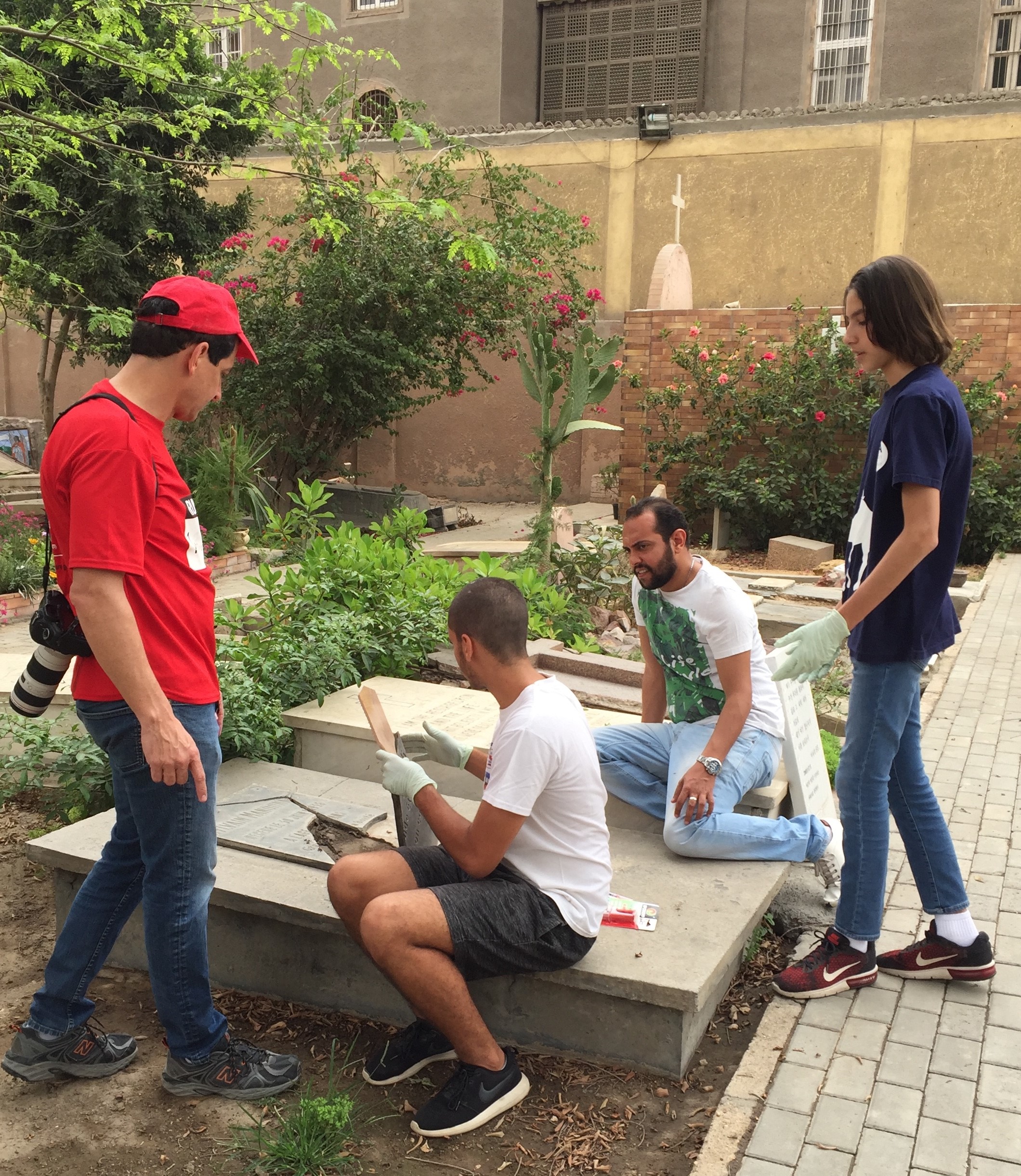 A Boy Scout working with his troop on Eagle Scout Badge. Image courtesy of Jean Isteero.

Word about the cemetery continues to spread through the writings of journalists and the living relatives of many who are buried there. Visitorship to the cemetery is also on the rise. One guest book is already full and another is rapidly filling. These logs indicate that many visitors have specifically come to see the grave of George Andrew Reisner, a renowned American Egyptologist who made many discoveries in Giza. They also indicate that many visitors came to see the gravesite of the missionary, William Whiting Borden, who passed away in 1913, before he could realize his goal of studying Arabic in order to go to China to work with the Muslim population.

In addition to its restoration and maintenance activities, the committee hopes to create a website and employ a full-time, well-qualified caretaker who will live on the premises.

--Jean Isteero is a retired missionary teacher and the wife of the late Rev. Dr. Albert Isteero, past President of the Evangelical Theological Seminary in Cairo.

Learn more about the Evangelical Church of Egypt (Presbyterian–Synod of the Nile) from the Presbyterian Foundation.