Planning for History: Edwin Brumbaugh and the PHS Building 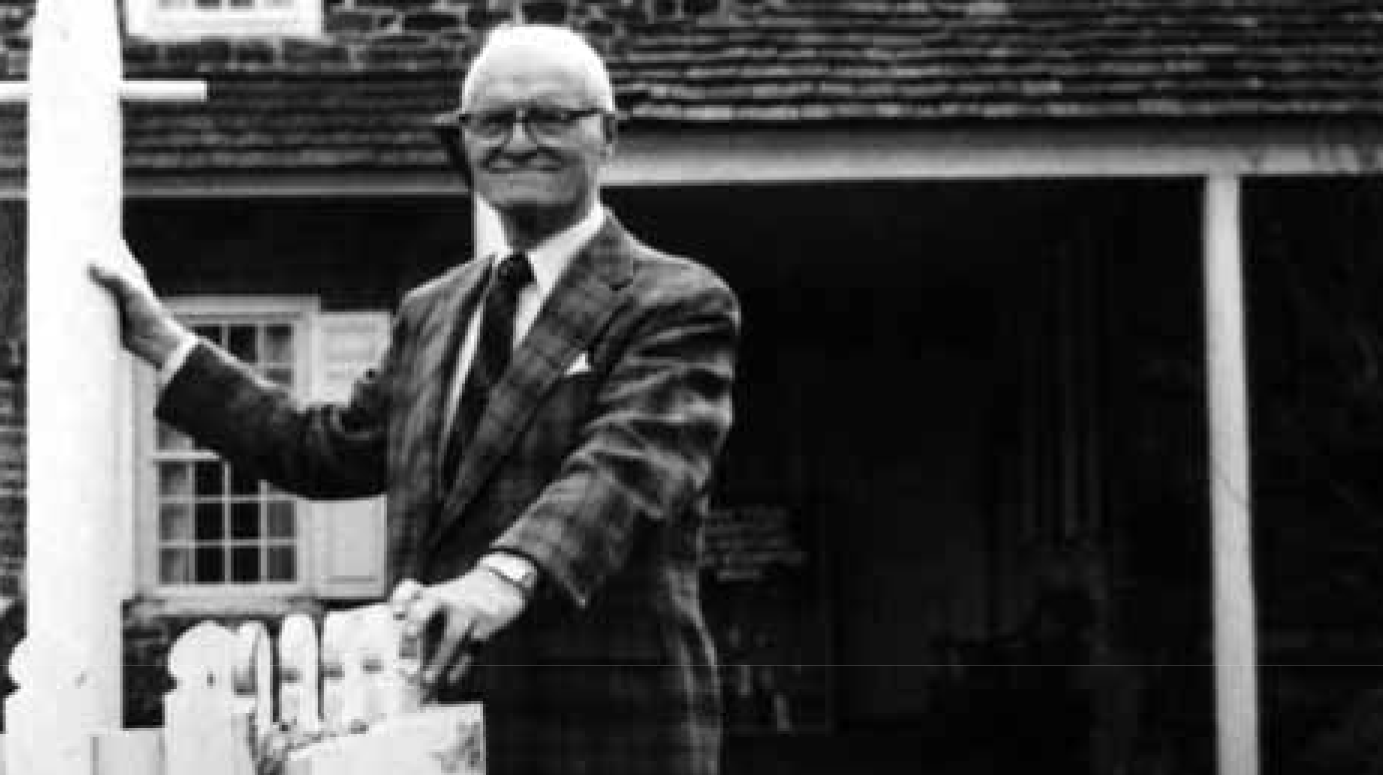 The Presbyterian Historical Society turned 100 years old in the mid-twentieth century. Always located in Philadelphia, the Society’s first home was at 821 Chestnut Street. Then, in 1897, the Society moved to the Witherspoon Building at 1319-1323 Walnut Street, a high-rise erected to house various Presbyterian Church offices, including the Board of Publication and Sabbath School Work, and the General Assembly. 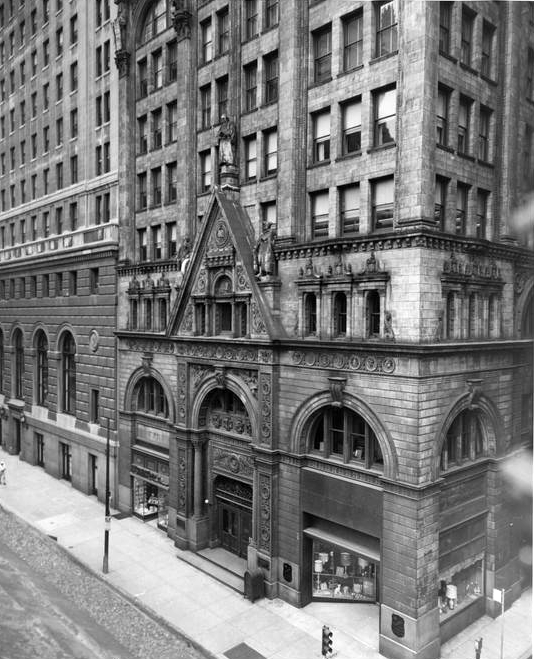 By the time the Society celebrated its centennial, the increasing amounts of records received were overwhelming the available space in the Witherspoon Building. At the 1959 General Assembly, the Presbytery of Philadelphia offered an overture asking the GA “to appoint a committee to study the possibility and to seriously consider the relocation of the Presbyterian Historical Society in the area of the Society Hill Redevelopment program in the City of Philadelphia.”[1] 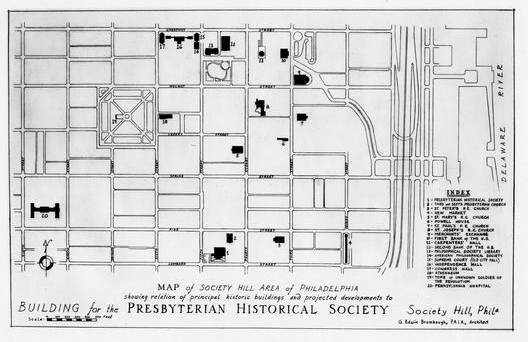 The overture was approved and, pending the raising of needed funds, the committee was informally organized under the leadership of John S. McQuade, president of one of Philadelphia’s leading general contractors. McQuade and the group initially faced three issues. First, where was the building to be located; second, what was to be the architectural style of the building; and third, which architect should be hired to design the building.[2]

The first issue, the Society’s new location, was easily addressed. Old Pine Presbyterian Church owned a lot adjacent to its sanctuary and graveyard and was willing to part with the lot as a site for the Society. Members of Old Pine even provided funds for a portion of the construction costs.[3] 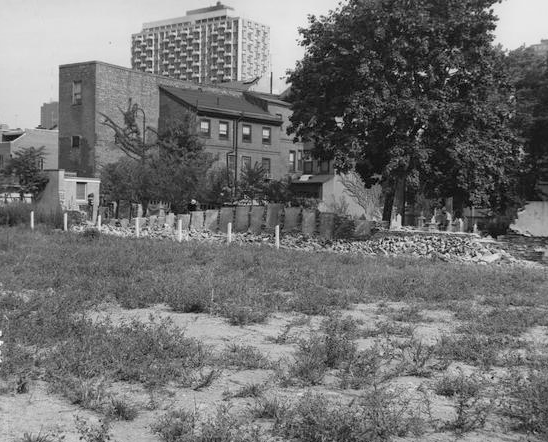 Empty lot on which the new Presbyterian Historical Society building would be constructed, ca. 1967.  [Pearl ID: 82852]

Next, it was decided that the style of the building would be mid-eighteenth century Georgian, to fit in with the existing buildings in the surrounding neighborhood.

Baader Young was best known for designing public buildings, including the Ebreeville State Hospital and elementary and secondary schools, including Haverford High School. In contrast, Brumbaugh was a well-known restoration architect, with many completed projects in Pennsylvania. Wise’s best -known work was the octagonal modernist Temple Adath Israel in Merion, Pennsylvania, while Mansell, McGettigan specialized in churches, among them, the traditional First Presbyterian Church in Springfield, New Jersey, and the modernistic First Presbyterian Church in Wildwood, New Jersey.[4]

Since the new building was to blend in with the mid-eighteenth century architecture of Old City, G. Edwin Brumbaugh, who was known for his extensive study of and practice in early American architectural styles and ornamentation, was the committee’s unanimous choice.[5] 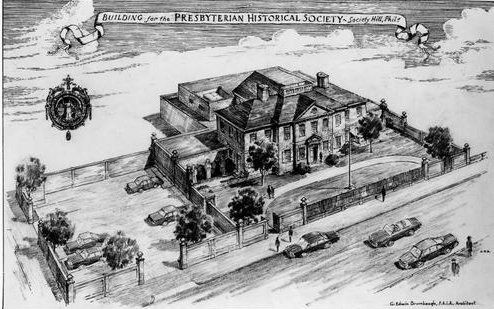 G. Edwin Brumbaugh (1890-1983), son of former Pennsylvania Governor Martin Brumbaugh, was born in Huntingdon, Pennsylvania and received his B.S. degree in architecture from the University of Pennsylvania in 1913. He began as a draftsman with Mellor and Meigs, a firm known for its design of large, private residences. Brumbaugh subsequently worked with Charles Barton Keen, a designer of country houses. By 1916, Brumbaugh established an independent practice concentrating on residential design. However, his interest soon turned to designing restoration plans for historic buildings. Among his better-known restorations are the Dilworth House, Ephrata Cloister, Grumblethorpe, Gloria Dei Church, and Woodlands mansion.[6]

An undated document, “The Building Proposal of the P.H.S.” described some of the improvements the building would bring to the Society:

The building will provide 21,200 linear feet of shelving with its three floors of stacks, as against the present 6,100 feet. There are to be 100 cabinets for manuscripts, as against the current 48. Adequate working space is planned for staff, visiting scholars and conferences up to 70 people. Suitable facilities for the display of historical portraits, pewter and communion items are included.[7]

The groundbreaking for the new building took place in August of 1966 and the cornerstone was laid on March 3, 1967. Included within the cornerstone were a Bible, the December 1966 issue of the Journal of Presbyterian History, the 1966 annual report of the Society, the Constitution of the PHS, a microfilm copy of the building plans, a new building brochure, and a 1966 Mint Set of United States coins. 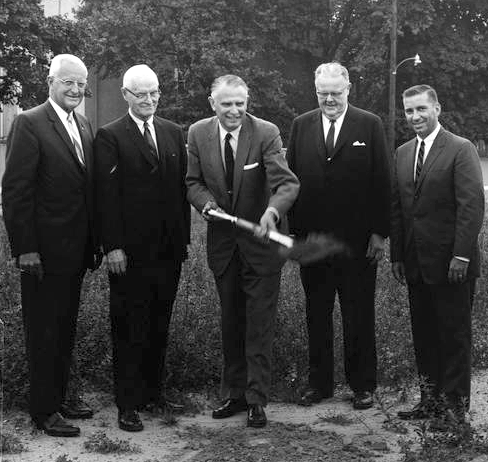 The building was dedicated on September 28, 1967, and the dedicatory address was delivered by retired United States Supreme Court Justice Tom Clark. 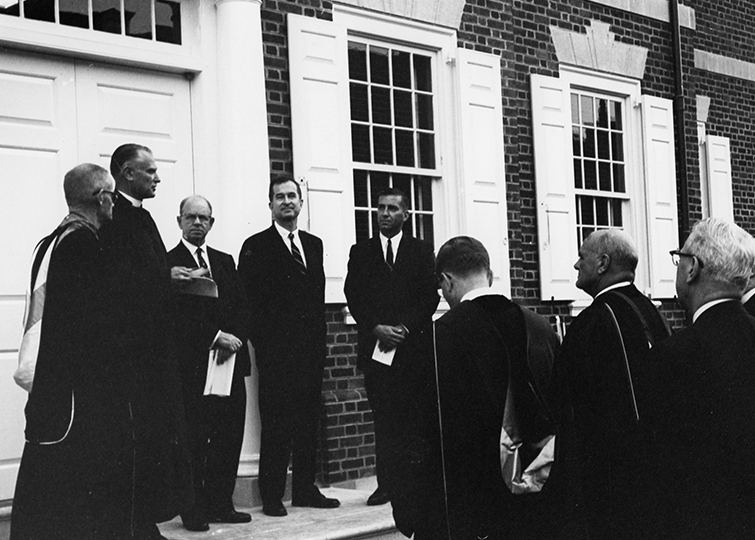 For more on PHS's contemporary history, see The PHS Building: 50 Years at 425.

Foundations of the Faith Reformation exhibit