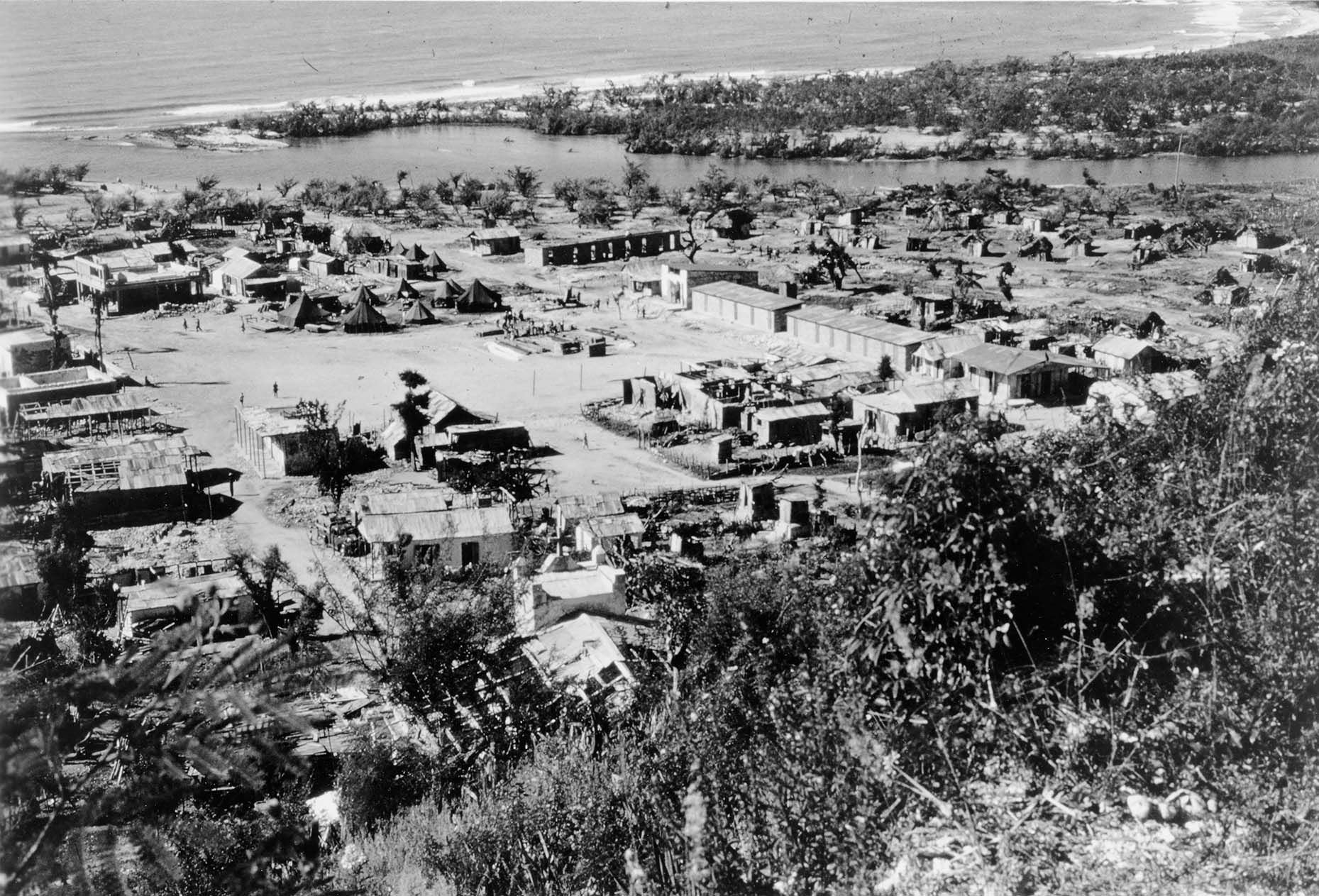 Hilltop view of Côtes-de-Fer after the passage of Hurricane Flora in 1963. The Disaster Team's tent unit can be seen to the left and the newly constructed housing units to the right. Many roofless dwellings can be seen throughout. [Pearl ID: islandora:179435]

On August 29th, we watched as Hurricane Ida made landfall near Port Fourchon, Louisiana on the 16th anniversary of Hurricane Katrina. Her effects were far-reaching, resulting in sweeping power outages, heavy rainfall, severe flooding, and the tragic loss of life.

As Philadelphia—home of the National Archives of the PC(USA)—began its post-flood clean-up, and grassroots organizations worked to allocate life-sustaining resources, we turned to examine past examples of disaster relief efforts. 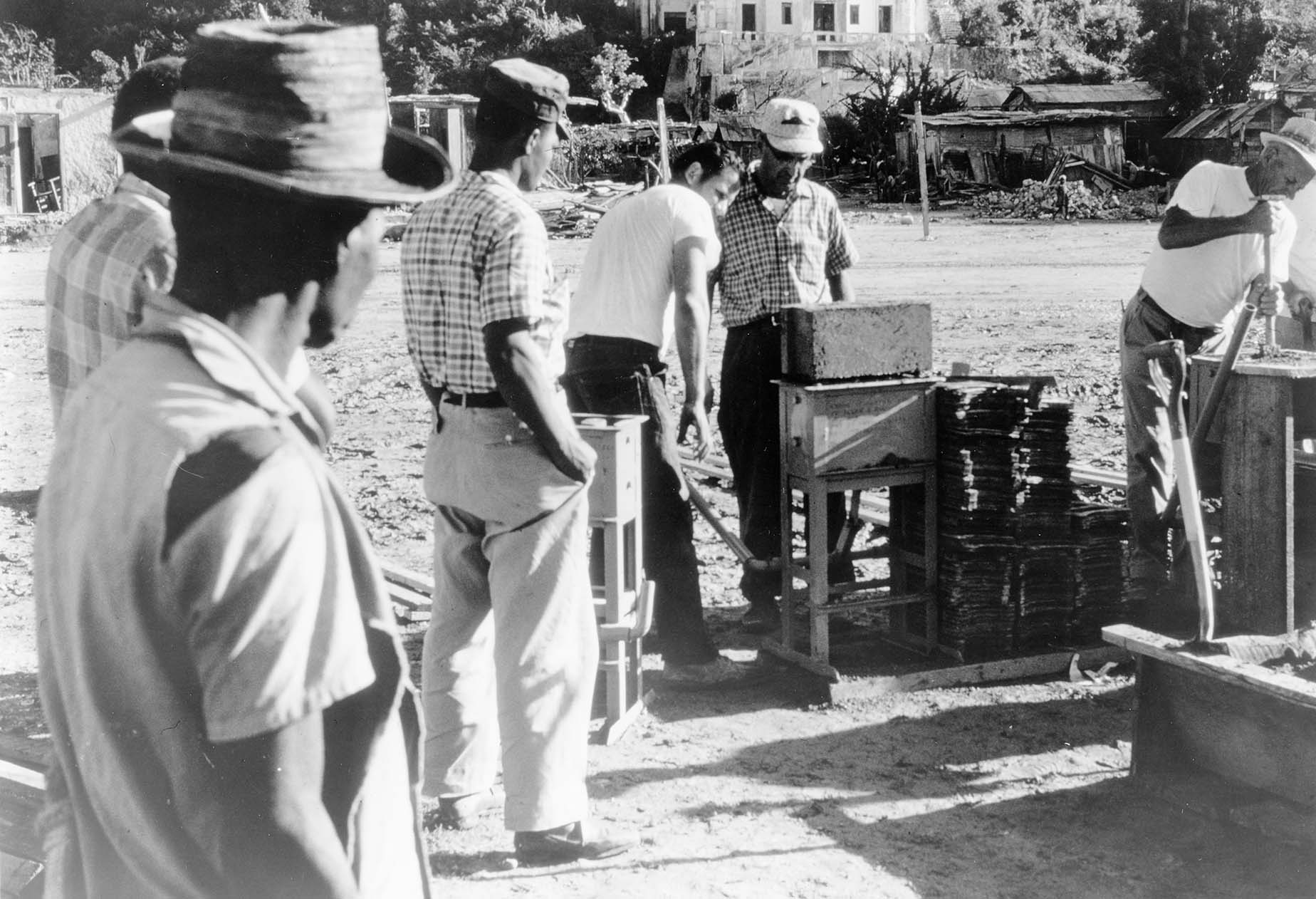 The first block to be produced by the cement-block machines. Here, members of the Mennonite Disaster Team instruct local Haitian workers how to use the machines. [Pearl ID: islandora:179423]

Browsing through Church World Service Records (RG-529), we discovered a file on the 1963 response to Hurricane Flora’s deadly and destructive passage through Haiti. CWS, an ecumenical relief agency formed after World War II, began expanding its efforts beyond Europe and China into Africa, Latin America, and the Middle East in the 1960s and 70s. The following photographs and more have been digitized and are now viewable in Pearl. 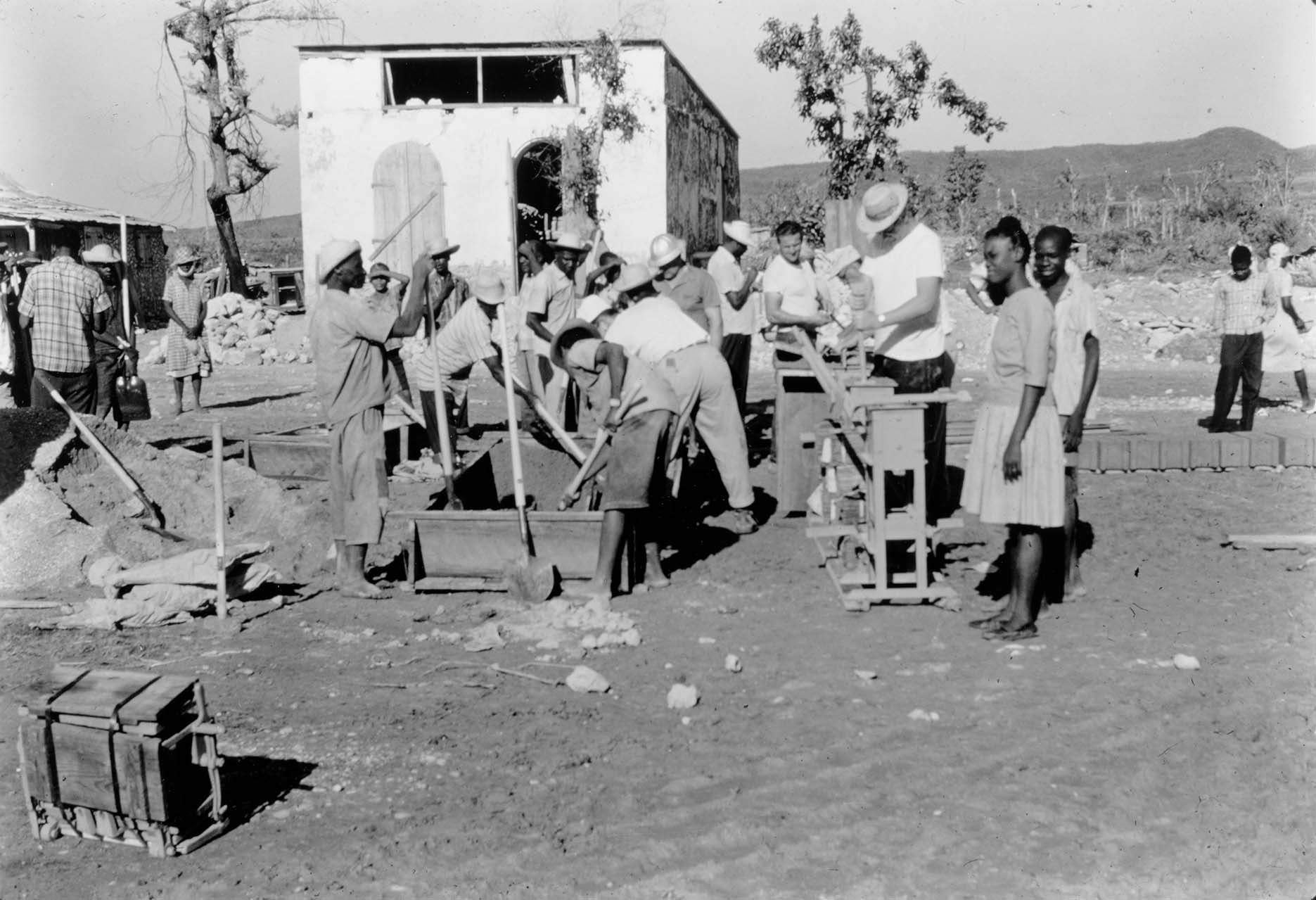 Text transcribed from image caption: The housing construction project is just getting underway with sand-sifting to the left, cement-making in the center, and block-making to the right. Freshly made blocks are on the ground to the right. The first house will be constructed in the right background. [Pearl ID: islandora:179425]

Several projects were initiated in Haiti in response to Flora, as noted in the 1963-64 Church World Service Annual Reports [RG529-108-9] and described in the written reports of Evelyn E. Grisso [RG529-103-5]. Arriving in Côtes-de-Fer five weeks after Flora passed through the area, Grisso observed the fifteen Mennonite Disaster Team volunteers rebuilding communities with the help of CWS. Through the ecumenical agency, building materials and cement block machines were delivered to aid in the construction of 82 homes. Direction came from Haitian agencies, who determined the most efficient use of resources. 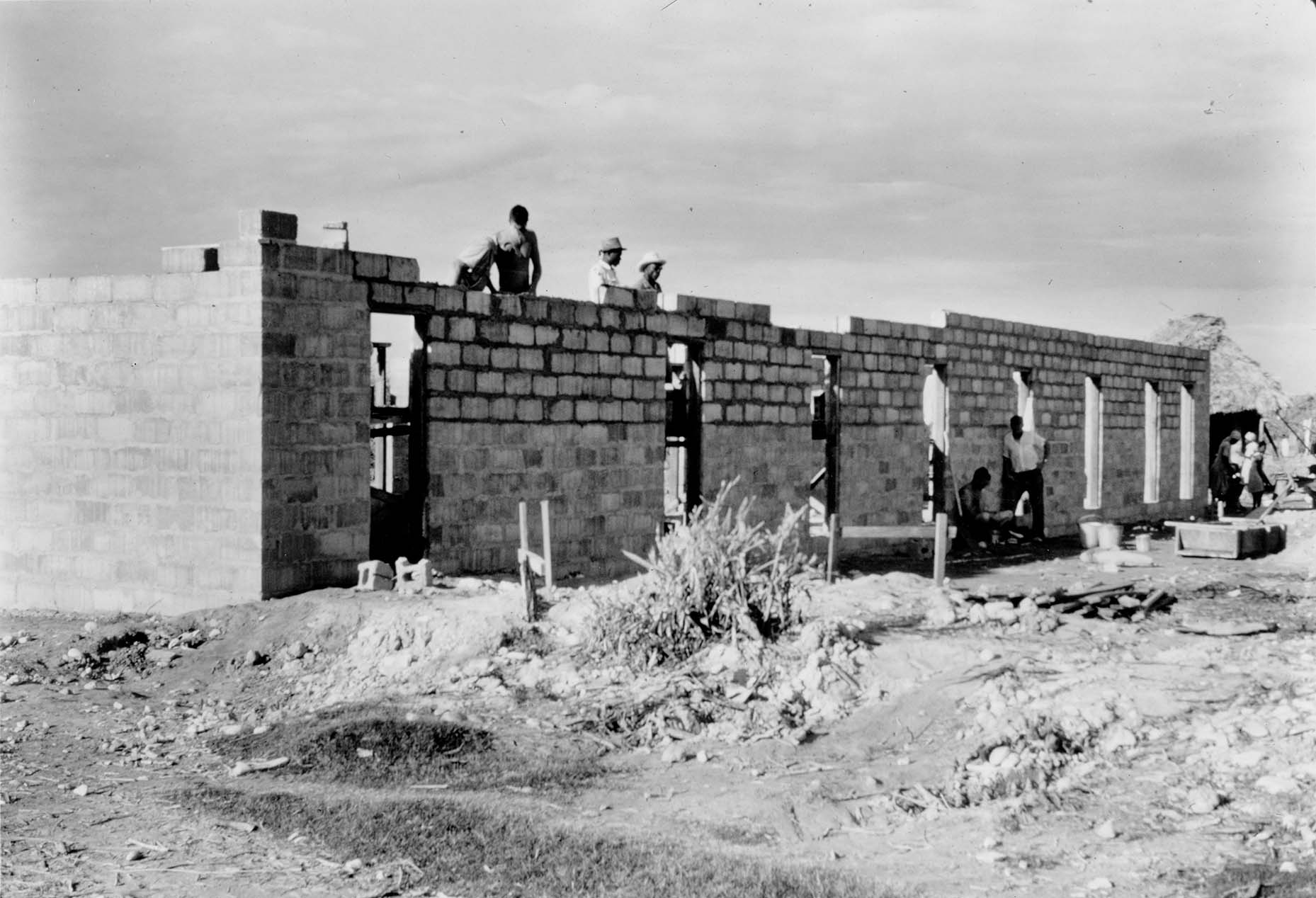 The third unit of homes constructed by Haitian workers and members of the Mennonite Disaster Team. [Pearl ID: islandora:179424]

The distribution of supplies was a logistical challenge, given that roads into towns were either non-existent or badly damaged. From Grisso's reports:

“[F]ood has been shipped from the states through Church World Service to Port-au-Prince. There [it is] loaded on a smaller freighter and brought to the two ports which were in the path of destruction. Because there is no pier, small fishing craft numbering about 7 boats, must be used for carrying the 100 pound sacks to the beach. From the beach another group of 25 to 30 men are needed to carry the sacks from the beach to the warehouses. These groups work until after sunset some days.” 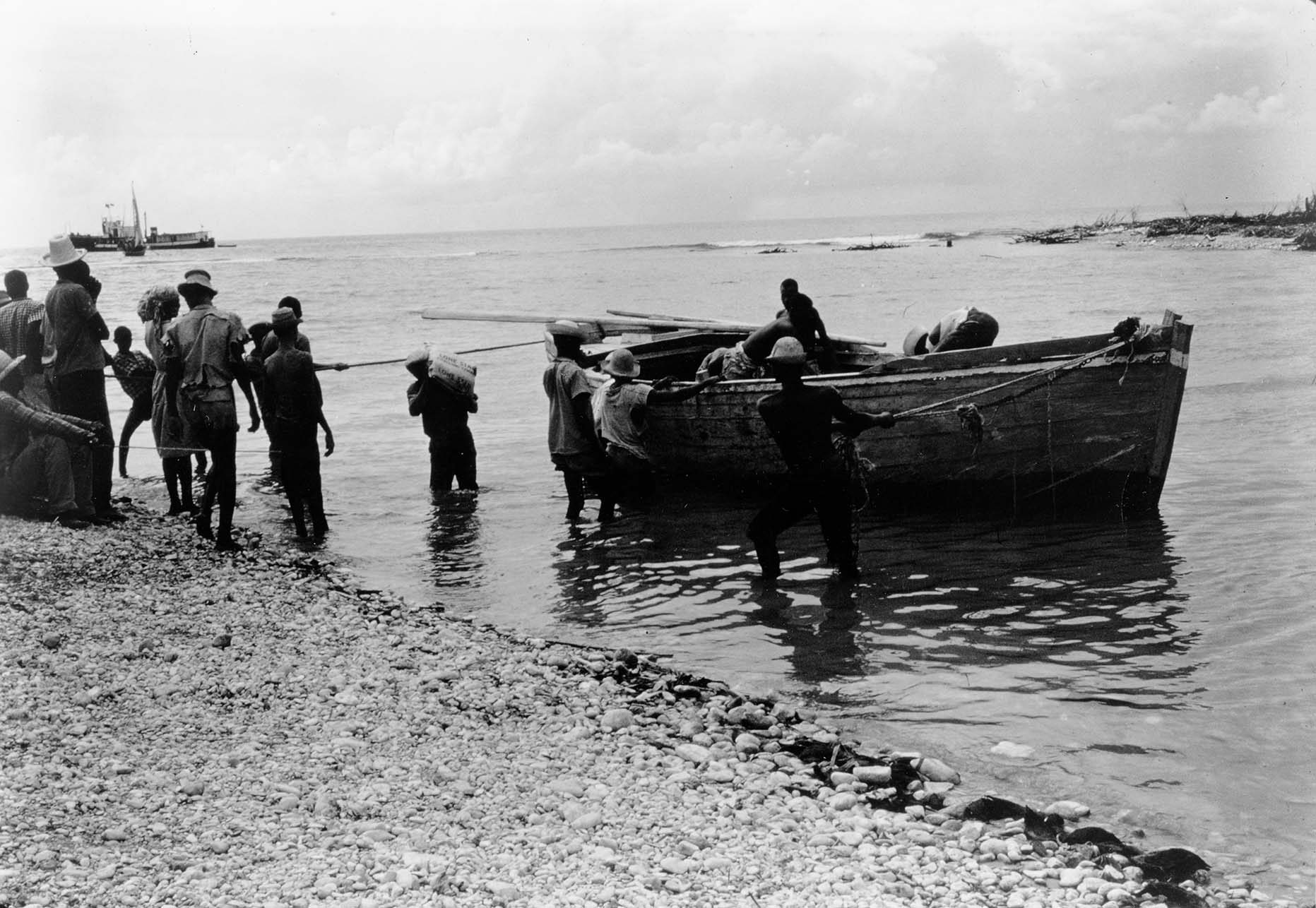 Unloading supplies from a fishing boat; the freighter can be seen in the background. [Pearl ID: islandora:179436]

Medical relief was organized quickly; teams went into various mountainous regions to reach those farther from the coast, delivering medical attention and vaccines. Approximately three months after the first Mennonite Disaster Service team arrived at Côtes-de-Fer, a dedication service was conducted to conclude the post-disaster relief efforts (although long-term infrastructure and development projects were still underway). Grisso described the event:

“As the teams, officials and leaders relaxed at the reception following, one couldn’t help but note that a greater spirit was a[t] work and a greater result brought about than just building houses,” Grisso wrote. “To see people of different races, religion, countries and language mingle and communicate with one another, and thus bringing about better understanding and hope, one can’t help but feel grateful, too, that out of chaos there has come good….” 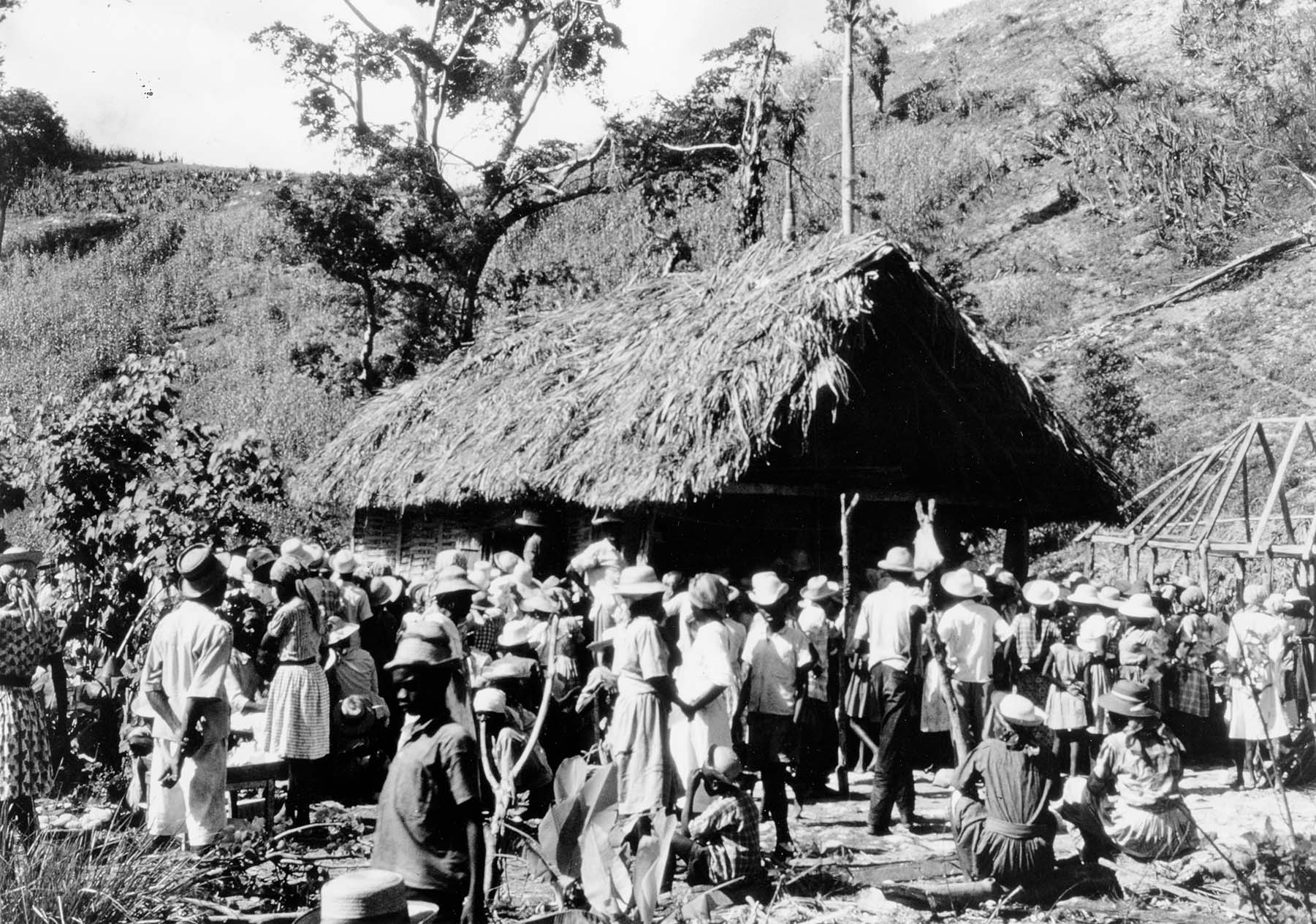 Text transcribed from image caption: Carrefour George. This tiny hut in one of the mountain areas about a 5 hour horseback ride from Cotes-de-Fer provided the clinic for the medical team. Some of these [people] have been waiting hours for a brief consultation with the doctor. [Pearl ID: islandora:179441]

In the face of increasingly severe climate-related catastrophes, it is crucial that we hold corporations accountable for their role in causing and perpetuating climate change. In the relief efforts that follow, we must continue to demand a more equitable distribution of resources from our local leaders and policymakers. The make or break is in the spaces in between, where despite systemic failings, our individual capacities to engage in mutual aid practices is what will hold communities together.

“Indeed, the particular virtue of the service concept is that it demands a relatively unself-conscious response to a human condition of distress, without primary regard for structure, organization, or even for the church itself. In this sense, service is truly evangelical, in the pattern of Christ’s response to those who happened in his way and asked his help.”