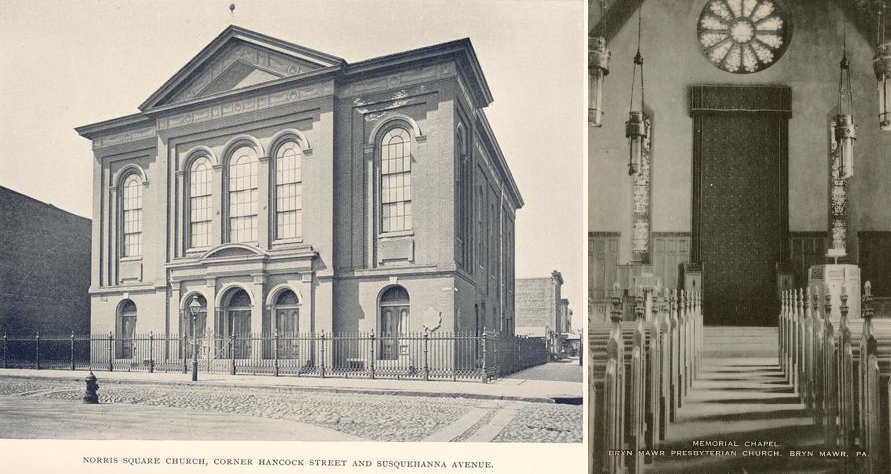 PHS is happy to announce completion of the digitization of original records of two Philadelphia-area churches: Bryn Mawr Presbyterian Church in Bryn Mawr, PA and the former Norris Square Presbyterian Church in the Kensington neighborhood of Philadelphia. The PHS digitization team scanned nearly 13,000 pages of Bryn Mawr's historic records including session minutes, registers, and a church newsletter. Norris Square's records, amounting to 1800 pages, were included in the digitization project as a token of thanksgiving for the work of Rev. Adan Mairena and the West Kensington Ministry.

Bryn Mawr Presbyterian Church is among the 20 largest congregations in the PC(USA), organized in 1873 by "13 women and 3 men," next to the Bryn Mawr Hotel. In the 1890s, Bryn Mawr directly supported the Presbyterian missionary William Wanless, founder of hospitals in Miraj, Maharashtra, India. Since 1998, the congregation has supported city churches in Philadelphia through its Urban-Suburban Partnership. It maintains an internationally-known sanctuary choir and handbell choir. 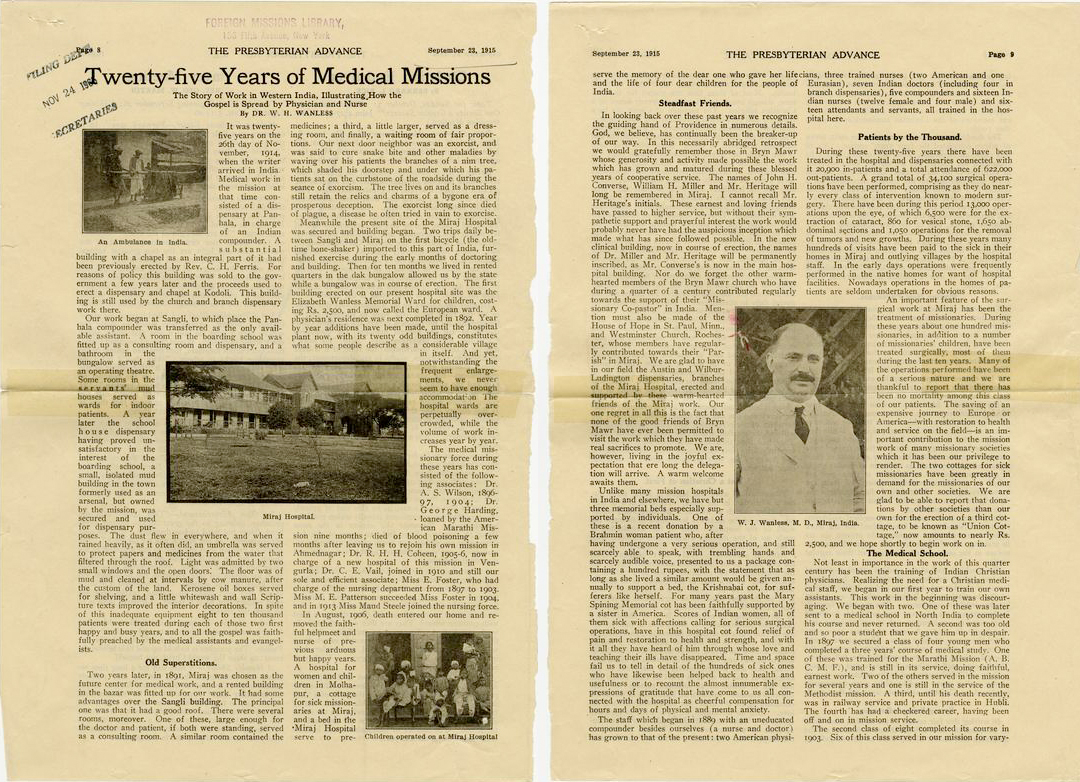 "Twenty-five Years of Medical Missions," by William James Wanless from the Presbyterian Advance, September 23, 1915. Click here to view in Pearl.

As always, thanks go to our digitization team, Allison and Gabe. Special thanks go out to Temple University's Tatiana Paden, who worked with Rev. Mairena to temporarily transfer records to PHS. In March of this year, I was able to visit West Kensington Ministry to help Tatiana rapidly appraise and describe records of Norris Square, which had been tucked into a far corner of the church office. During the visit, we unearthed original session minutes dating back to 1860. 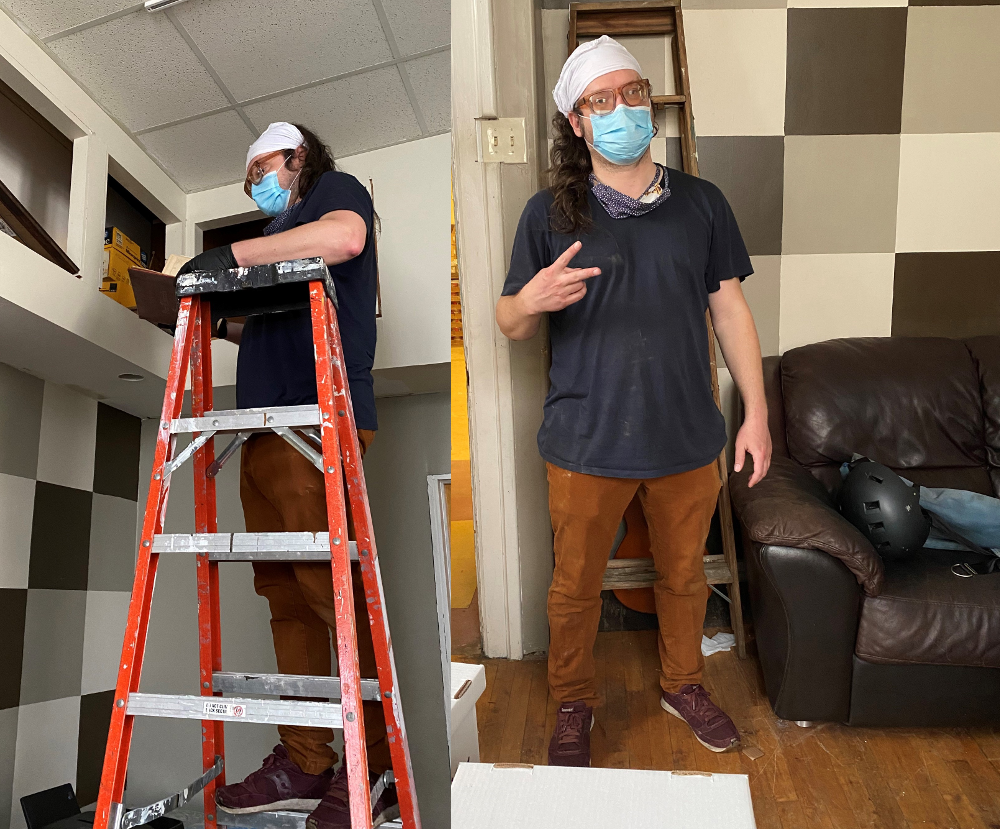 The church was organized as Ninth United Presbyterian Church in the old United Presbyterian Church of North America (UPCNA) in 1860 and laid out in anticipation of rapid growth in the outlying development known as Kensington. Within a decade, the church would be surrounded by lumber mills, dye works, textiles factories, and the American Street rail yard of the North Pennsylvania Railroad.

Norris Square grew alongside Philadelphia's industrial might and in 1914, while Lee Rife was pastor, had more then 700 members. At the time, the congregation was the largest United Presbyterian church outside of western Pennsylvania, and the seventh largest in the country. 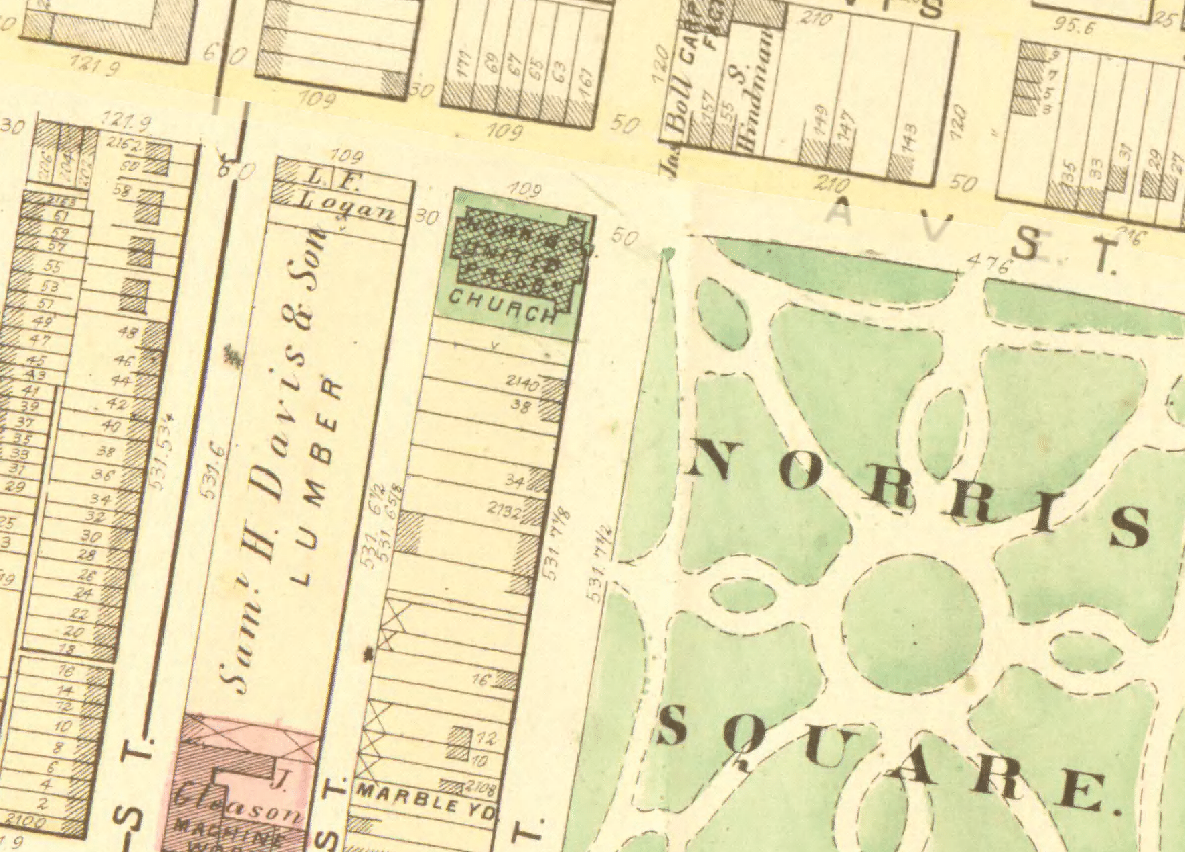 Norris Square in 1875, via Philageohistory

Over the course of the 20th century, Kensington went from being a distant suburb of central Philadelphia to being an inner city neighborhood. As industry declined and white flight transformed the neighborhood, members of the church moved elsewhere and Norris Square transformed into a kind of legacy congregation largely disconnected from its new neighbors from Puerto Rico and the Dominican Republic.

Rev. Adan Mairena came to Norris Square after he served as a Lilly Resident at Bryn Mawr Presbyterian Church in 2008. Norris Square officially closed the same year, leaving the old church and building to the newly formed West Kensington Ministry (WKM). Led by Rev. Mairena, WKM continues to perform the corporal works of mercy, sustained in part by partner churches in the Philadelphia suburbs. During the covid-19 pandemic, WKM has operated a feeding program, provided clothing for needy neighbors, and served as a vaccination hub.

Sanctuary of West Kensington Ministry, and the corporal works of mercy, 2021

It's our pleasure to preserve traces of the works and ministries of these sibling congregations. Learn more about our deposit and digitization programs, and our annual church memberships.