Visualizing Missions: The power of the image in promoting foreign missions 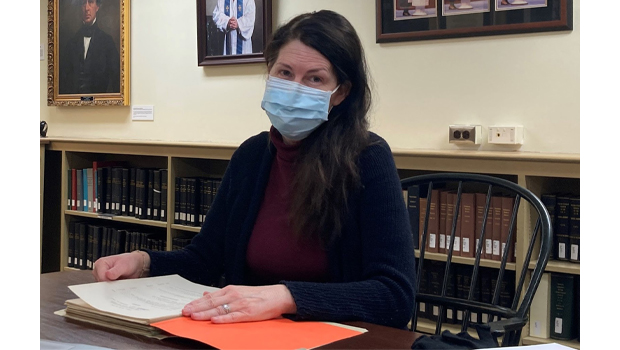 The abundance of mission-related events and materials disseminated throughout the United States and Canada meant that many North American Protestants had some exposure to foreign missions during the first half of the twentieth century. “Protestant missionaries,” according to historian William Hutchison, “were the chief interpreters of remote cultures for the people at home, and as such played a central role in the shaping of American public attitudes.”[1] One of the primary avenues for this influence was the Missionary Education Movement of the United States and Canada (MEM) supported by Protestant mission boards.[2] This organization’s ambiguous name refers to the promotion of missions within the home churches. Missionary advocates believed that educating lay people in the aims and activities of world missions would “inevitably result in larger and more regular giving.” [3]

My research at the Presbyterian Historical Society focuses on the visual materials produced by the MEM with an emphasis on the production, distribution and reception of educational films about overseas missions. These valuable but understudied resources provide a vehicle for understanding mainline Protestant perceptions and portrayals of missionaries and the non-Western world. The Presbyterian Historical Society offers a valuable service in preserving these rare visuals along with the supporting archival documentation.

The Beginnings of Missionary Education

Initiated in 1886, the nondenominational Student Volunteer Movement of the United States and Canada (SVM) brought a renewed momentum to the overseas evangelical endeavor begun in 1806 by Protestant students at Williams College. The SVM’s recruitment campaign, underscored with the watchword “the evangelization of the world in this generation,” was so successful that the number of applicants quickly outpaced the budgets of foreign mission boards. In response, Protestant leaders organized the interdenominational Young People’s Missionary Movement (YPMM) in 1902 with the motto “study, pray, give.”[4] In consultation with representatives from the denominational mission boards, this organization offered course materials and teacher training for mission study classes offered by local churches, mission societies, and summer conferences. 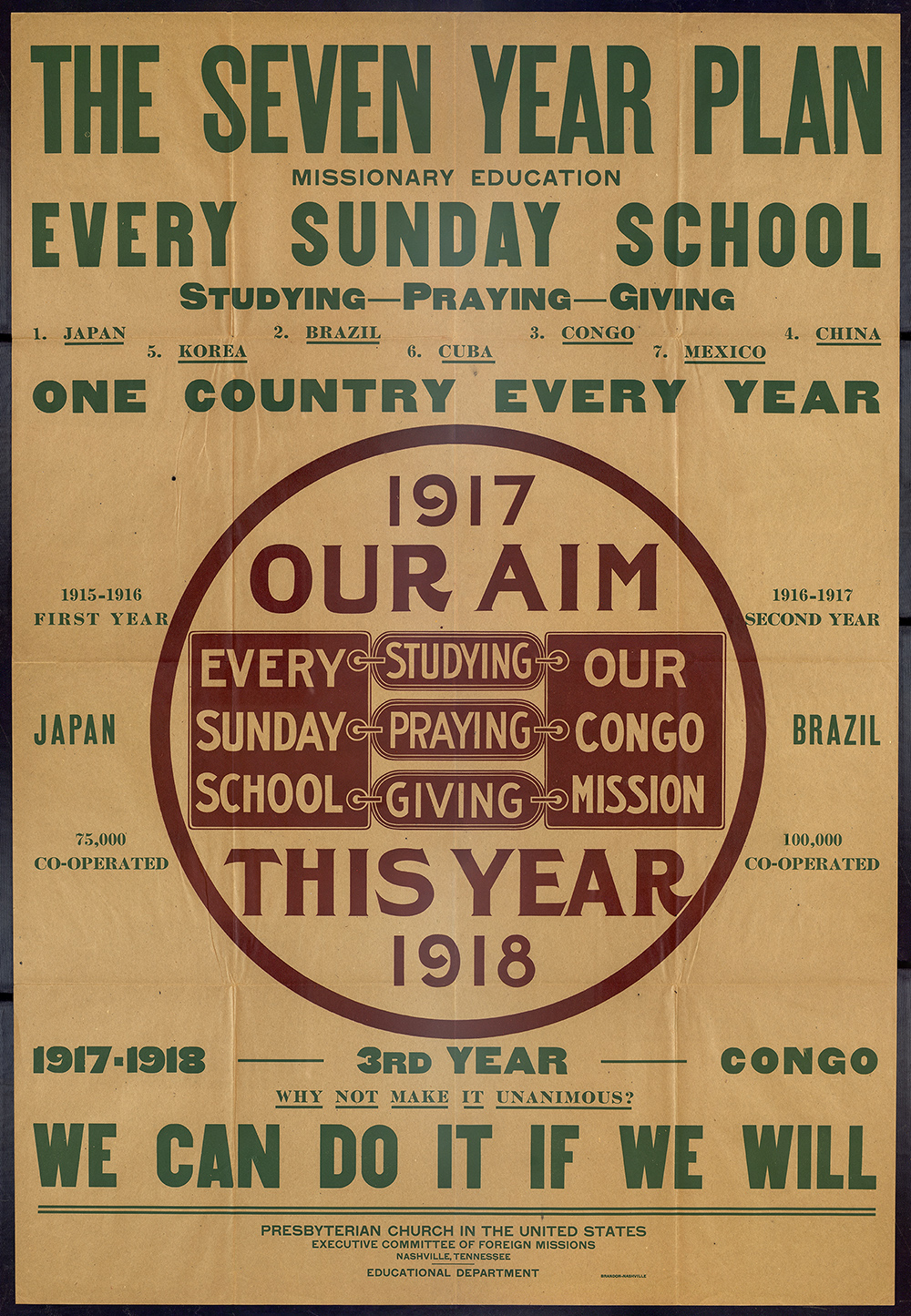 “The Seven Year Plan, 1917-18.” This poster highlights the missionary education motto and the foreign mission study themes chosen for a seven year period. Published by the Executive Committee of Foreign Missions of the Presbyterian Church in the U.S. Board of World Missions Poster Collection, B.3.7. [Pearl ID: 183317]

By the time the YPMM was organized at the turn of the twentieth century, the power of the eye as an opening to parishioners’ hearts had been firmly established in the minds of mission promoters.[5] Specifically, nineteenth-century Protestant leaders recommended maps as a way to arouse the attention of apathetic audiences.

The Movement continued this visual tradition in the twentieth century by producing a variety of map types, from general reference to missionary themes, in multiple formats from wall maps to individual maps for home use. The earliest maps printed by the YPMM were featured in study books. One notable example in the PHS collection is S. Earl Taylor’s The Price of Africa (1902). The maps in this book include a colorful insert map of Africa, a “railroad, cable, and steamship map of Africa,” and five handdrawn maps depicting missionary journeys including three for David Livingstone.[6] 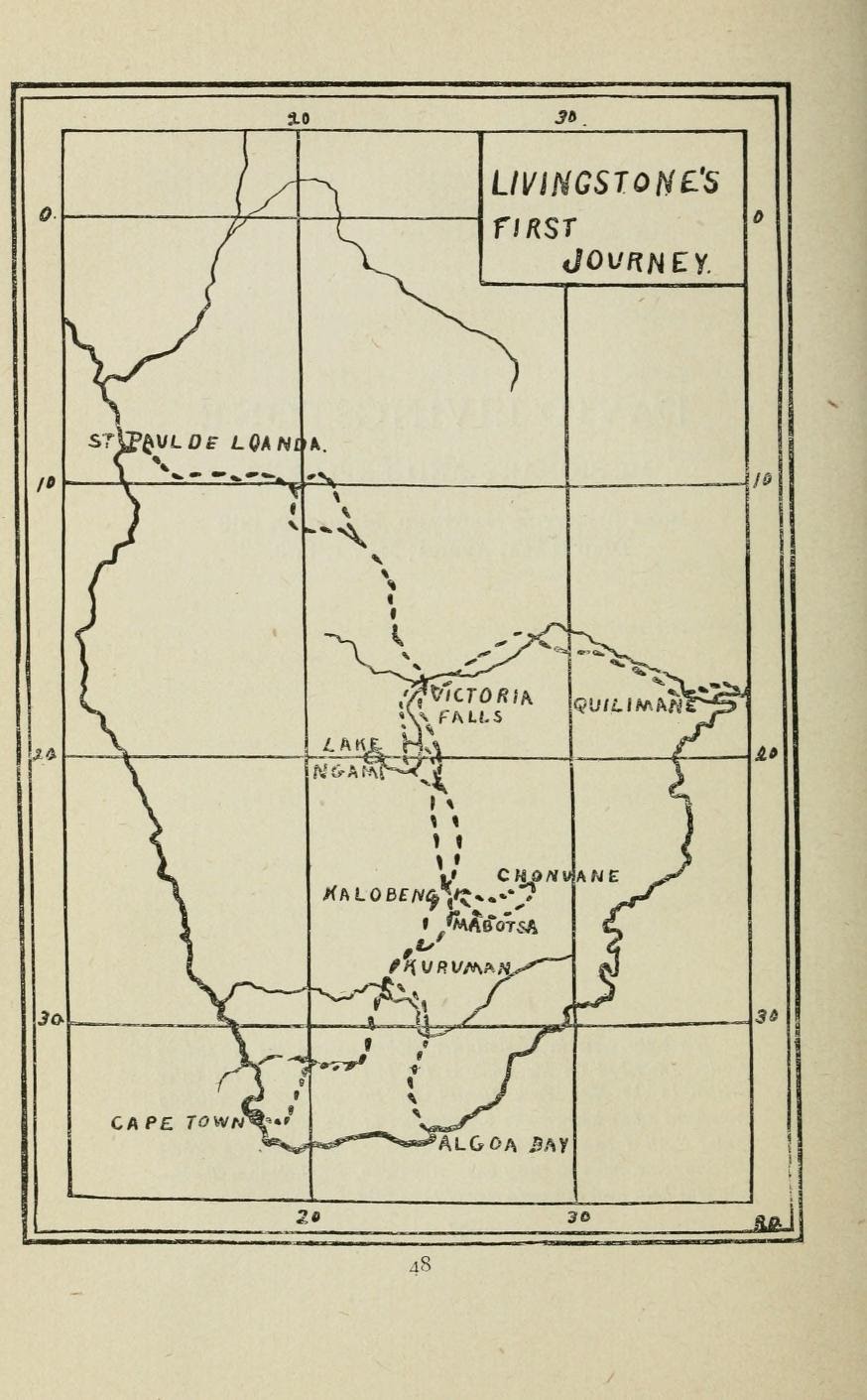 According to the accompanying biographical text of Livingstone, reporter Henry M. Stanley had observed: “If you look at the illustration of [Livingstone’s] route, you will see that it is the rude figure of the cross.”[7] Thus, maps used in missionary education not only imparted geographical knowledge, but were at times endowed with spiritual symbolism and significance.

In 1911, the Movement’s board changed the organization’s name to the Missionary Education Movement (MEM) to emphasize the organization’s primary objective and to reflect its growing audience. That same year, the Movement sponsored the World in Boston Missionary Exposition with a record-setting attendance of approximately 400,000, followed by the World in Cincinnati and the World in Baltimore in 1912 and the World in Chicago in 1913.[8] Exposition promoters underscored that “seeing is believing,” and claimed that even skeptical attendees would be convinced of  “Christianizing the world."[9]  A photograph of the Department of Missionary Education at the World in Baltimore shows the prominence of study books, but also a sampling of charts and a large wall map of the middle east. 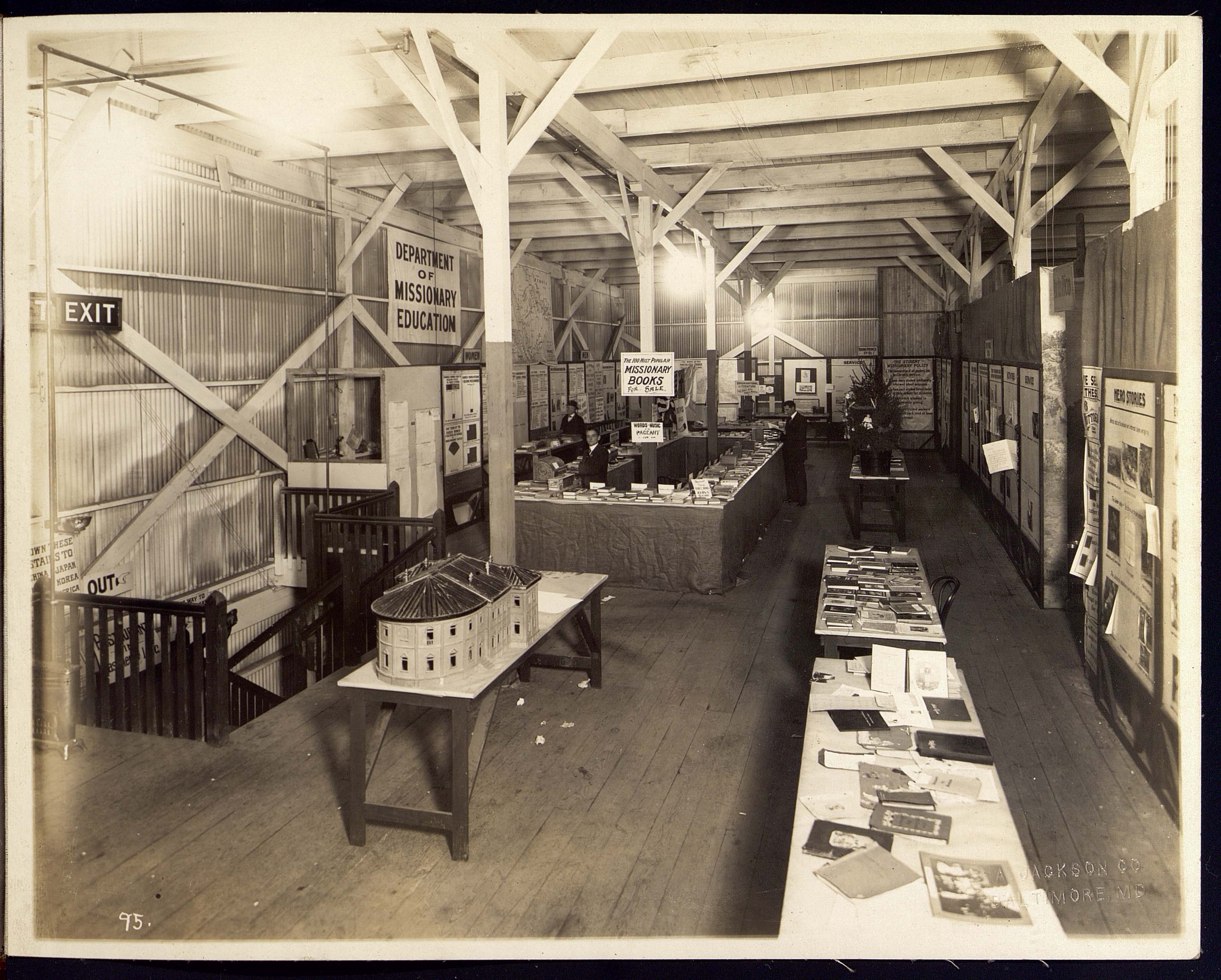 Audiences were hungry for images of the non-Western world and the Movement responded in the 1910s by expanding its pictorial offerings. Beyond the annual staple of study books and maps, MEM catalogues in the Society’s collection advertised posters, portable missionary exhibits, costumes, curios, flags, dramatic scripts, photographs, lantern slides, lithographs, and stereopticon lectures. Stereopticon lectures and pictures were in such demand that the department proudly publicized its ability to be self-supporting.[10] 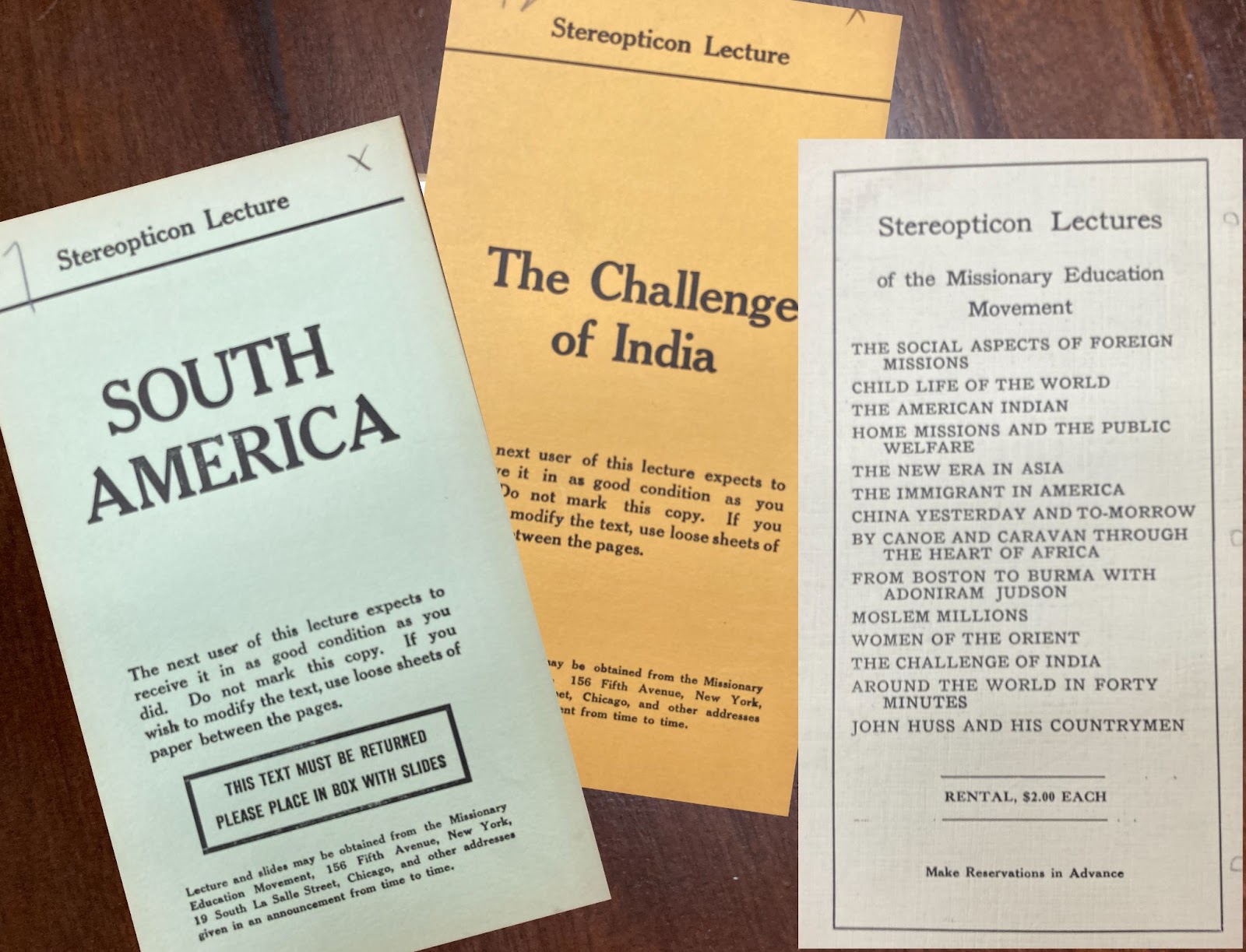 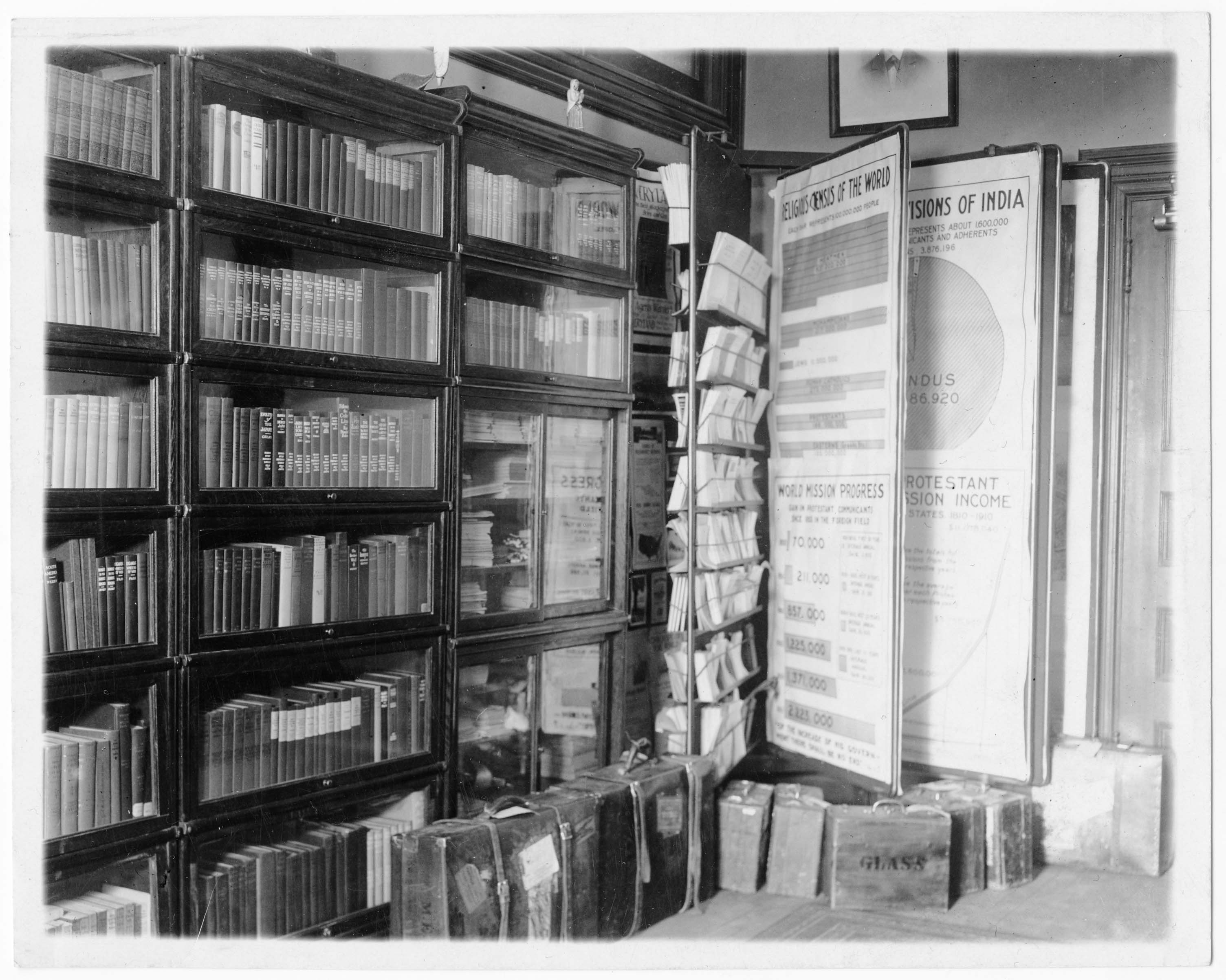 After the Great Depression, funding for foreign missions declined causing mission boards to search for new ways to recapture parishioners’ interest. In 1935, the Movement collaborated with the nonprofit Harmon Foundation on the first motion picture designed to supplement the annual foreign mission study theme. Emory Ross, author of the upcoming study book Out of Africa (1936), supervised the production of the silent film Africa Joins the World (1936).[11] A sample mission study poster from the PHS collection, “What do you know about Africa?” (1936), recommends motion pictures from the Harmon Foundation, as well as material from the MEM and denominational resources produced by the Presbyterian Church, U.S.A. 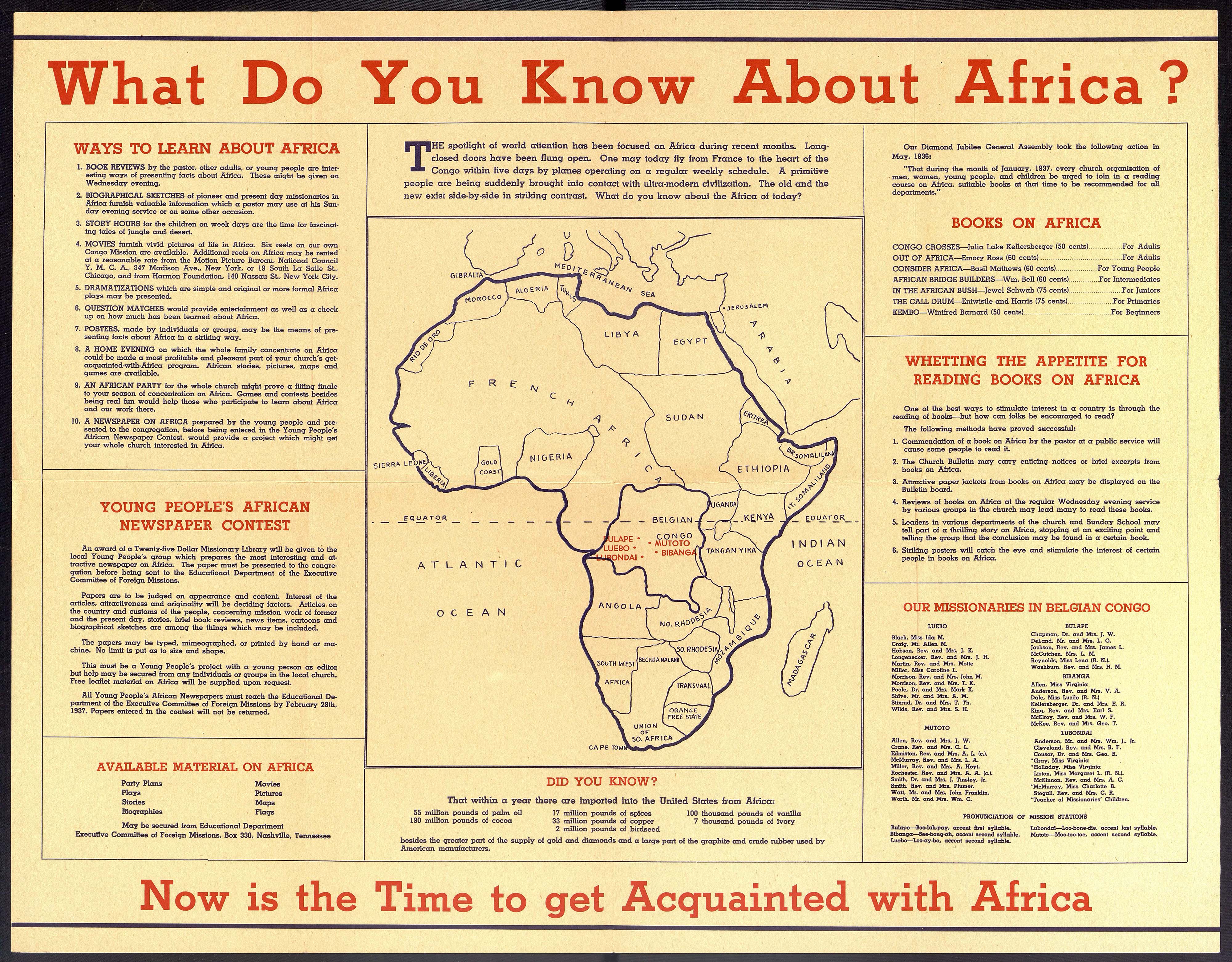 “What do you know about Africa?” highlights the variety of study materials available in 1936,  published by the Executive Committee of Foreign Missions of the Presbyterian Church in the U.S. Board of World Missions Poster Collection, B.3.7. [Pearl ID: 183318]

The pinnacle of foreign mission films came with the organization of the Protestant Film Commission in 1945. The Harmon Foundation and the MEM numbered among the thirteen interdenominational agencies supporting the organization along with seventeen mainline and evangelical denominations.[12] The first films produced by the Film Commission all supported the Protestant mission study curriculum including Beyond Our Own (1947), My Name is Han (1948), Oscar-nominated Kenji Comes Home (1949), and South of the Clouds (1950).

With the exception of the premiere film, these motion pictures were filmed on location with nonactors in an effort to depict situations and people “as they really are.”[13] The plots centered on indigenousness Christians converting family members and friends with the help of Protestant schools, clinics, and agricultural programs. The films received critical acclaim, theatrical premiers, and television distribution in their time.

Although largely forgotten by today’s audiences and overlooked by film scholars, the motion pictures sponsored by the Movement are an important resource for understanding the evolving Protestant-American perspectives on missions, non-Western cultures, and non-Christian religions. By examining these films, alongside the other visuals, printed materials, and archives of the MEM, scholars can begin to piece together how mission boards attempted to influence Protestant-American attitudes and donations through their twentieth-century promotional campaigns.

-- April is currently a Christian Studies doctoral student at the School of Religion, University of Southern California. Previously, she worked for National Geographic Television in Washington D.C. where she produced hundreds of hours of television over a period of seven years. Her research interests within religion include media studies, mission studies, cultural studies, as well as race, ethnicity and gender studies.