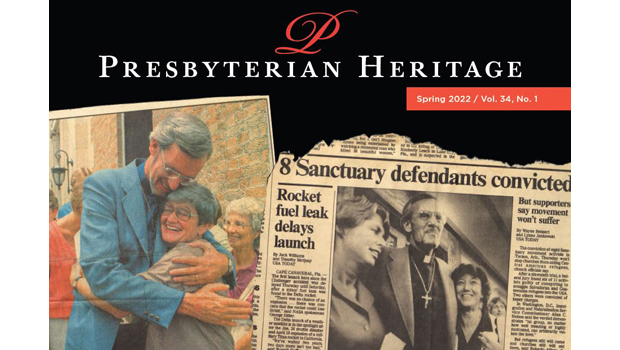 Forty years ago, Southside Presbyterian Church in Tucson, Arizona, publicly declared itself a sanctuary for people fleeing war in Central America, defying U.S. immigration authorities, and challenging us all to love our neighbor.

After five hours of discussion at a congregation meeting in January 1982, the vote was called: 79-2 in favor. Southside would declare itself a sanctuary two years after the assassination of Óscar Romero. One of the action’s opponents immediately reported the church to the FBI.

Southside had no intention of hiding what they were about to do. On January 23 their pastor, John Fife, wrote to federal attorneys and Immigration and Naturalization Service (INS) officers informing them of the church’s plan to break the law and demanded an end to the deportation of refugees. At 10 am on January 24 in front of eight TV news crews, Fife read the church’s declaration. 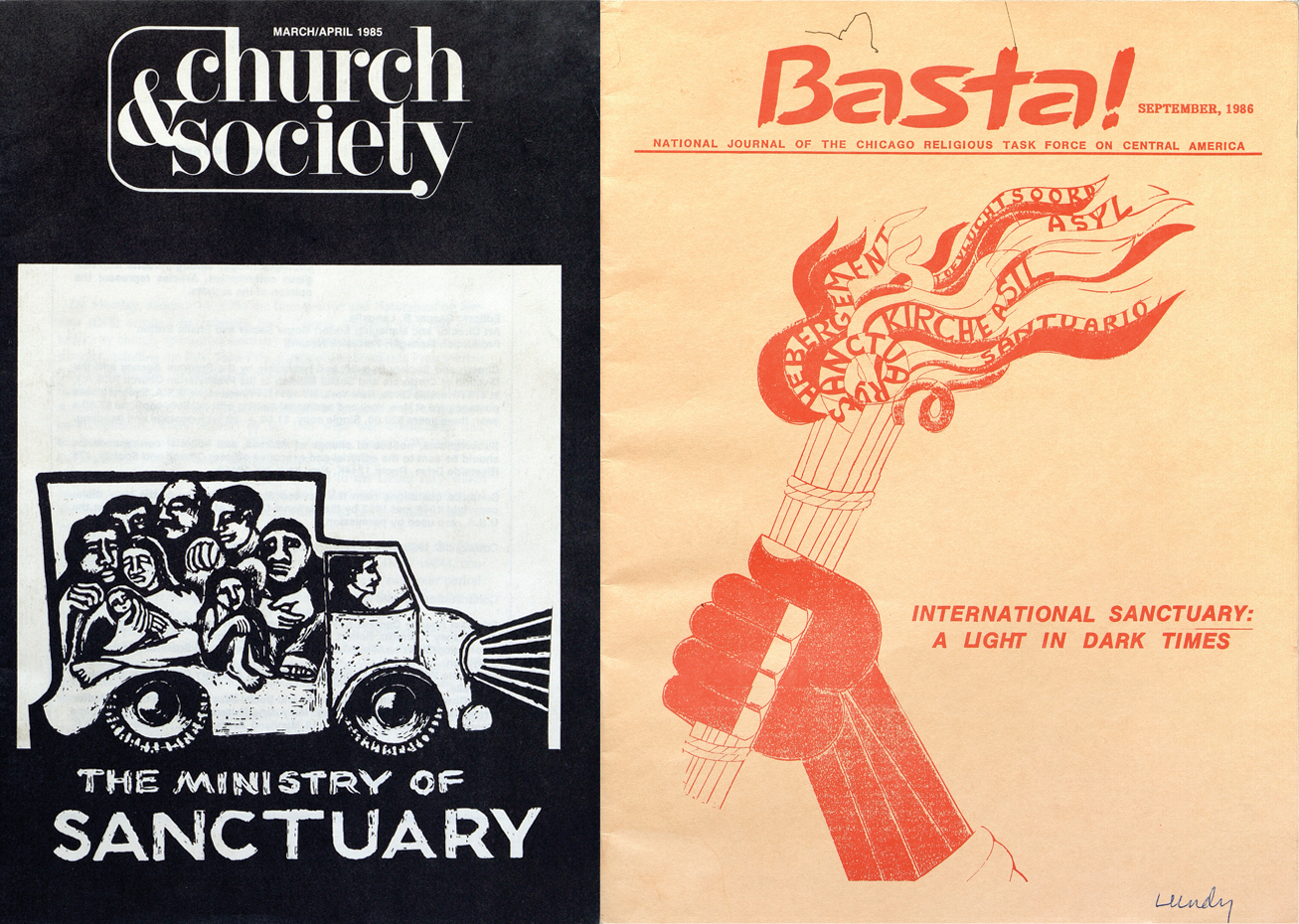 Within a year, some 1600 Salvadorans would transit through Southside to safe houses around the country. Over the next several years activists in Tucson and their network of supporters would face surveillance, indictment, and prosecution for shielding and transporting refugees and asylum seekers from Central America. Their movement, in defense of the poor and the stranger, against the United States’ unjust immigration enforcement, and against the U.S. war machine that provoked the migrants’ flight, would be called Sanctuary.

Sanctuary was a direct reaction to a crisis years in the making. In July 1980, 26 Salvadorans were stranded by their coyotes in the Sonoran desert; 13 people died. St. Mark’s Presbyterian Church in Tucson and its pastor David Sholin spearheaded support for the 13 survivors, raising $2,000 for their bond.

Compelled by this action, Sholin, Fife, Father Ricardo Elford and other organizers began weekly worship services every Thursday night outside the Tucson federal building, in protest of U.S. immigration policy and against U.S. support for death squads in El Salvador and Nicaragua. They soon built a national network of supporters and raised $750,000 for bail and legal fees for migrants.

In 2022, Mary Ann Lundy sat down with Records Archivist David Staniunas to reflect on her work with the Sanctuary Movement and her refusal to testify at the trial 16 Sanctuary workers, including John Fife. Click here to listen to the oral history in it's entirety.

Doing Sanctuary outside the bounds of immigration law began informally. In November 1981 in Berkeley, California, an Immigration agent chased an undocumented man into a church. The local backlash led the INS director to order that no arrests be made in churches, schools, or hospitals. Soon St. John’s Presbyterian Church in Berkeley began sheltering a Central American family. In Tucson, the Quaker activist Jim Corbett was sheltering 21 Salvadorans in an adobe shack. Corbett turned to Southside for help and for a year, there was relative quiet.

In December of 1982, 60 Minutes aired a piece on the Sanctuary movement that acquainted U.S. audiences with the root causes of migration from Central America. At the same time, INS started an undercover operation, infiltrating the movement in the Arizona cities of Tucson, Nogales, and Phoenix. Agents attended meetings and wore wires to record Sanctuary workers’ and migrants’ conversations in homes, churches, and on the road. 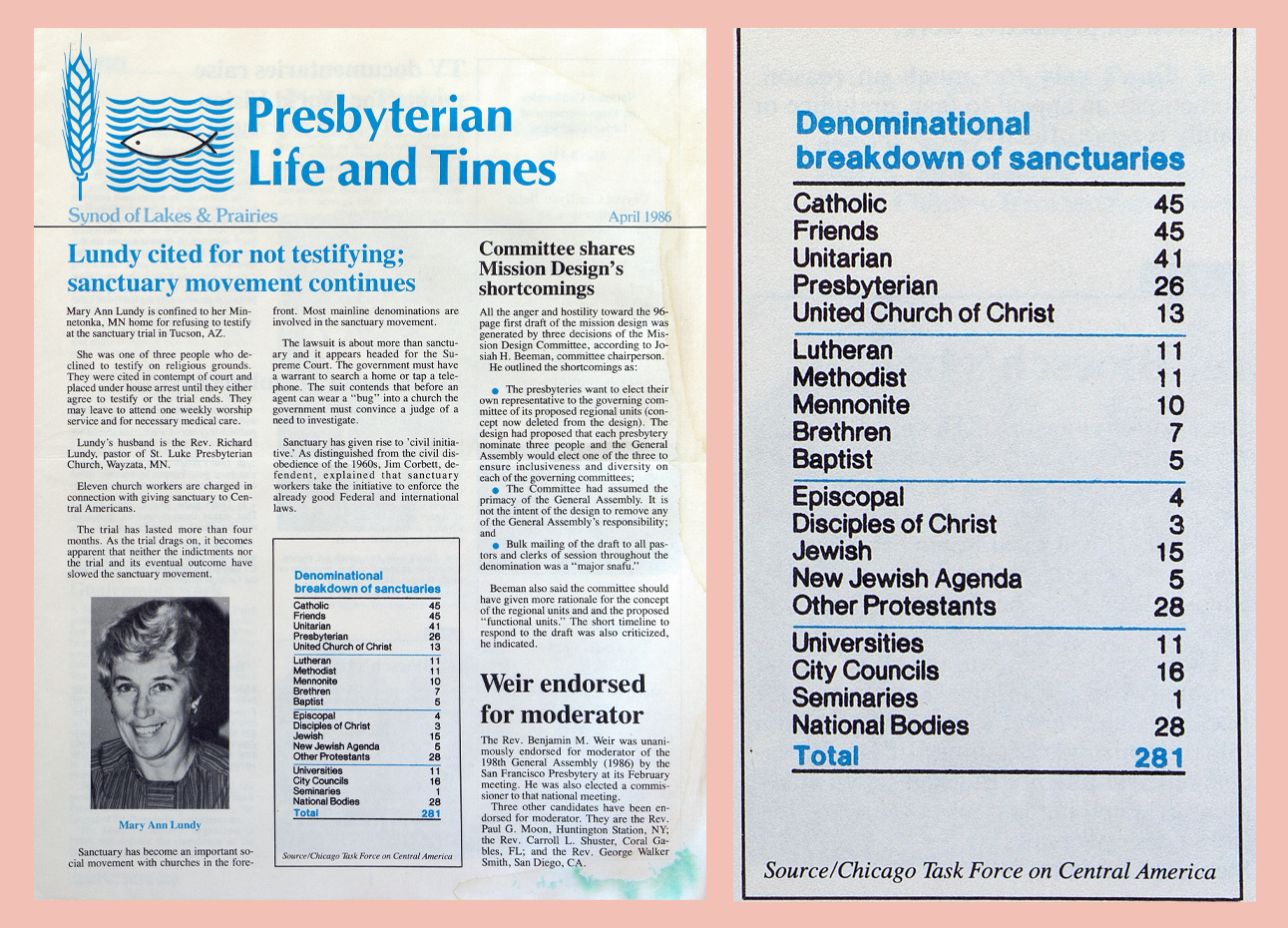 Cover of "Pesbyterian Life and Times," April 1986. Mary Ann Lundy was part of Riverside Church in New York City and sentenced to house arrest for refusing to testify during the trial of John Fife and 15 other Sanctuary workers.

In January 1985, a Phoenix grand jury indicted 16 Sanctuary workers, including John Fife, on 71 counts related to transporting and sheltering migrants. The trial began in November. The prosecution depicted the Sanctuary workers as a human trafficking ring, “masterminded” by John Fife.

At trial, only Francisco Nieto Nuñez was allowed to testify before the jury. No other testimony was shared about the conditions leading to any refugee’s flight from El Salvador. A doctor working among refugees inside El Salvador, Nuñez described his and his wife’s imprisonment and torture by the national police, and the attempted drowning of his infant child.

Amanda Craft, Manager of Immigration Advocacy at the Office of the General Assembly, shares how John Fife and other Sanctuary workers shifted the way church institutions related to and accompanied migrants.

Also called to testify were two Presbyterians, Kay Kelly of Southside, and Mary Ann Lundy, part of the Sanctuary group at Riverside Church in New York City. Both refused to testify, were held in contempt of court, and sentenced to house arrest. The trial ended in May 1986 with convictions of eight out of 11 defendants. John Fife faced ten years in prison, others faced between five and 15. That July five of the defendants were sentenced to three to five years’ probation; three received suspended probation sentences.

Fife would be elected moderator of the 204th General Assembly in Milwaukee in 1992. He continues to advocate for migrants, the poor, and the dispossessed, and was a founding member of No More Deaths / No Más Muertes. The movement he helped found in 1982 continues today and is carried out in churches around the country and through the PC(USA)’s Office of Immigration Issues.