Cesar Chavez at the 1974 General Assembly 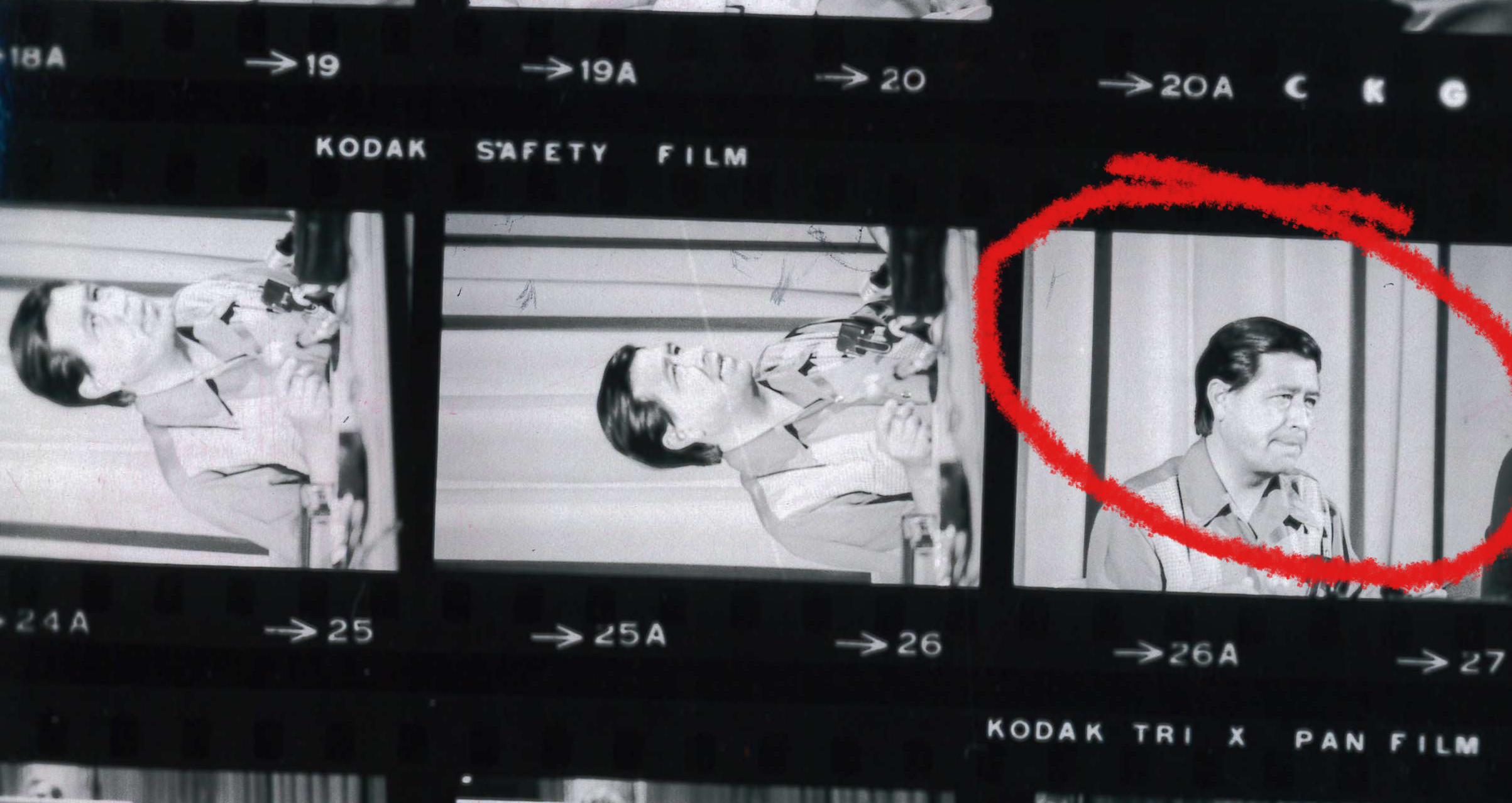 In 1972, Fred Eyster, pastor of the United Church of Christ in Bethlehem, Pennsylvania, told his church why his family was leaving the church to work for the United Farm Workers in California. Fred and Sue would be the eighteenth couple to join the National Farm Workers Ministry, an act of accompaniment with farm laborers under the aegis of the National Council of Churches. They would teach free school for laborers' children, work in the fields, and help organize the workers, while living as they did -- paid a subsistence wage, giving up middle-class suburban life.

"On a personal level, there will be an opportunity for Sue and me to work mutually, a dream we have always shared. There is now a chance for us both to share work and home duties. There is a chance for us to test our commitment to radical witness. We've done a lot of talking, marching, and writing of letters. Now we can put our hands and feet where our mouths have been."

What led comfortably-installed ministers to cross the country for a harder life was the plight of California's farm laborers, and the charisma of Cesar Chavez. 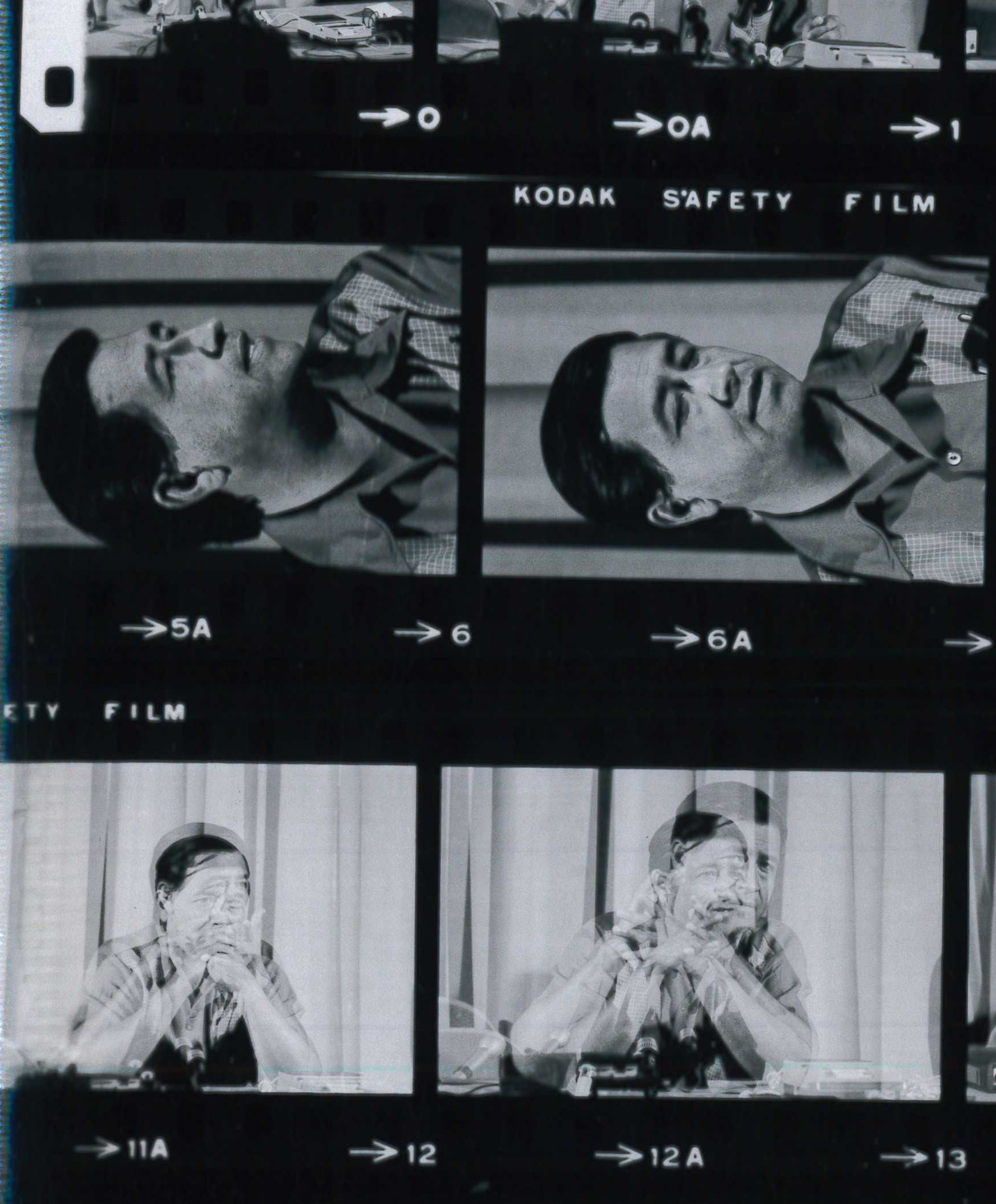 From the 1960s through the 1980s, Presbyterians along with their siblings in the membership of the NCC would support the United Farm Workers with statements from General Assembly and with the work of their hands.

"We've done a lot of talking, marching, and writing of letters. Now we can put our hands and feet where our mouths have been" --Fred Eyster

The 1973 UPCUSA assembly passed a resolution to support the UFW-initiated boycott of head lettuce and table grapes. Chavez addressed the 186th General Assembly the next year in Louisville, to thank commissioners for the church's support of the union. The full text of his address is not in the minutes of the assembly, and the UPCUSA, then under a new regime of austerity, did not produce audio, video, or still images of the event. 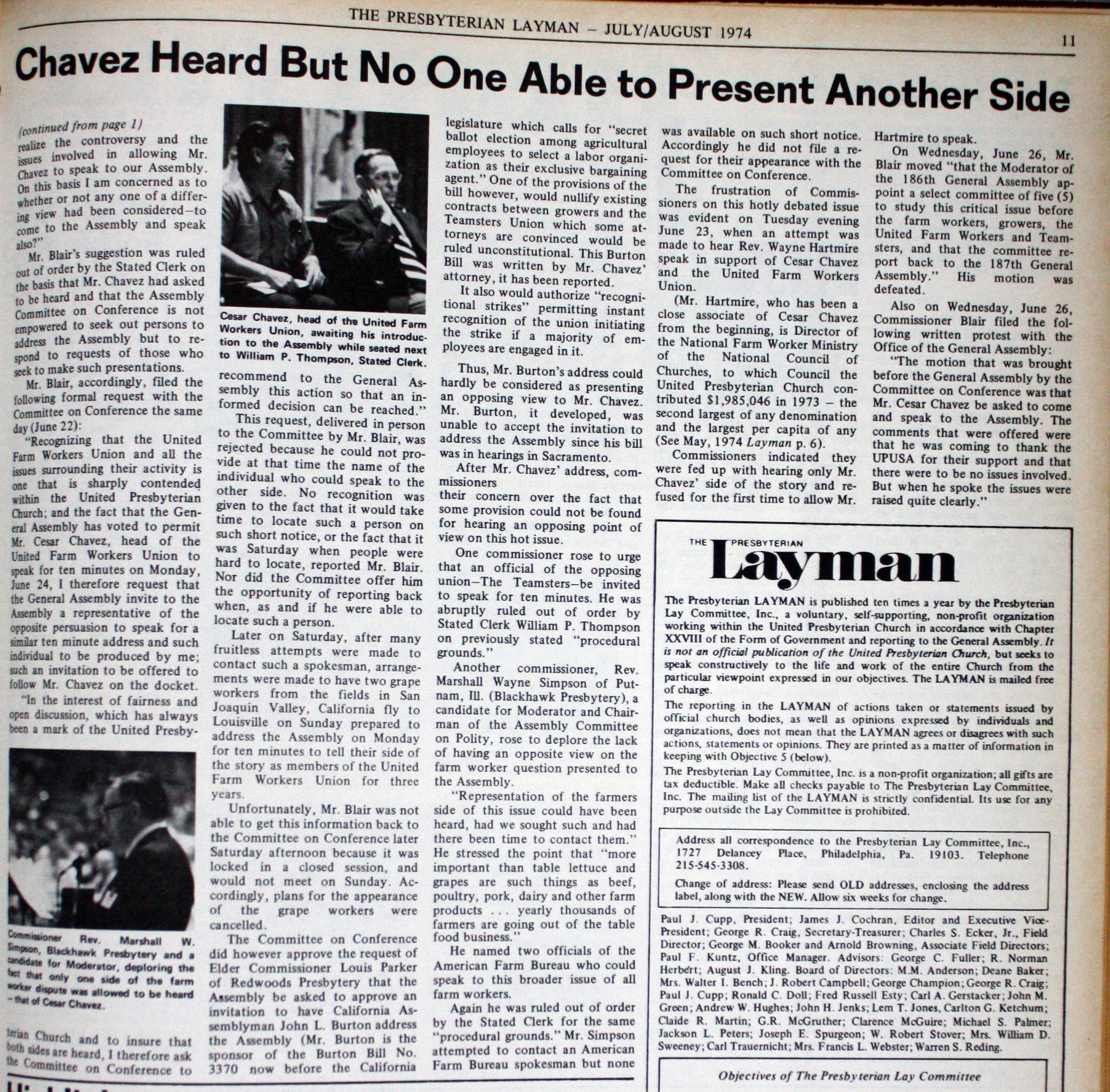 On the Monday of the assembly, Chavez was given 10 minutes to speak. He thanked the Church for its support, and spoke of a common commitment to nonviolence. "The men and women and children who harvest the food we eat do not have enough food for themselves. Last year 200 of them were beaten, 40 shot, and two killed. Yet we have been able to keep our commitment to nonviolence because of people who care enough to struggle for justice."

The right wing of the denomination, represented in the reporting of the Presbyterian Layman, objected to Chavez's appearance, and detailed the efforts of commissioners to find a speaker to counter Chavez. Their efforts were ruled out of order by the stated clerk, William P. Thompson, chiefly because commissioners could not identify individuals prepared to speak.

Even friends of the farm workers' cause, La Causa, were upset about denigrating comments Chavez made about the Teamsters. "Don't you know, Cesar, that there are growers and maybe even Teamsters among us? Don't you see that not all United Presbyterians are convinced of la causa?," wrote Nancy Griffing in AD Magazine. 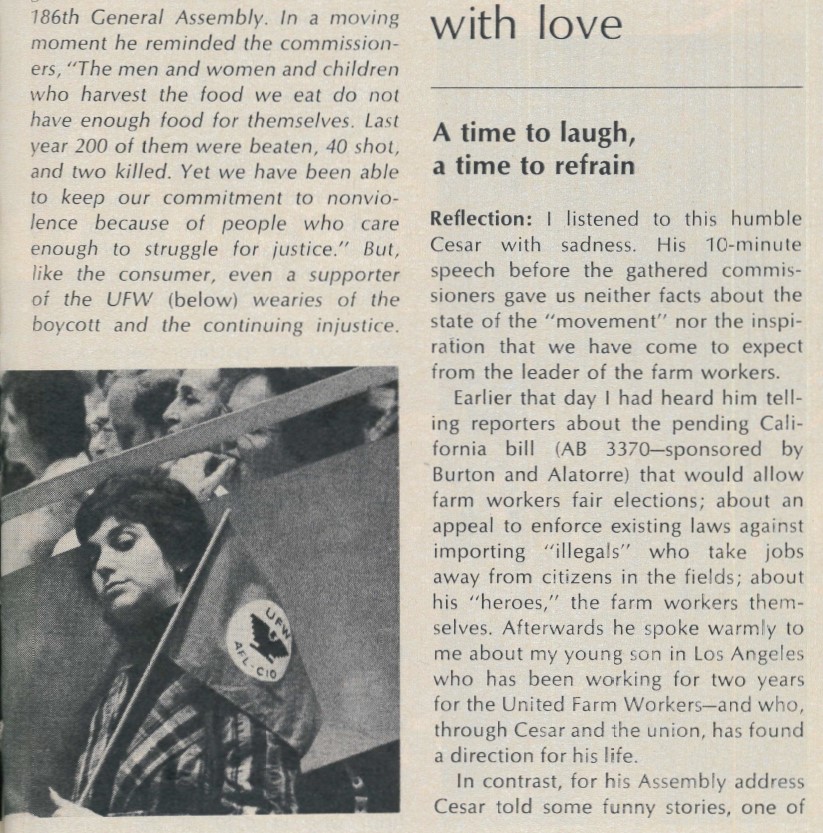 In August of the prior year, in Lamont, California, Teamsters had attacked UFW picketers with "pipes, grape stakes, chains, brass knuckles and clubs." After months of violence known as the Battle of Caochella Valley, Chavez would have been understandably unfriendly toward the IBT.

The Assembly proceeded to vote down an overture to extend the 1973 boycott, replacing it with a call "to support the small growers in their efforts to gain economic justice" and "to work for
reconciliation."

The frustration of some commissioners poured over into an abrupt refusal to hear from Chris Hartmire, a Presbyterian minister who had worked alongside Chavez and the UFW since the 1960s.

Hartmire moved with his spouse Pudge and their children to join the California Migrant Ministry in 1961. In 1962, Chavez and his family moved to Delano, California to begin organizing farm workers, visiting towns and ranches, painstakingly building a small base of power, known as the National Farm Workers Association. In 1965, members of the mostly Filipino Agricultural Workers Organizing Committee abruptly walked off the fields and called on their Mexican-American comrades to join them. The NFWA, despite Chavez's trepidation, voted to join the strike. Chavez called on Hartmire and the California Migrant Ministry to support the strikers as well, and from then on the bonds between Presbyterians and la causa were forged. 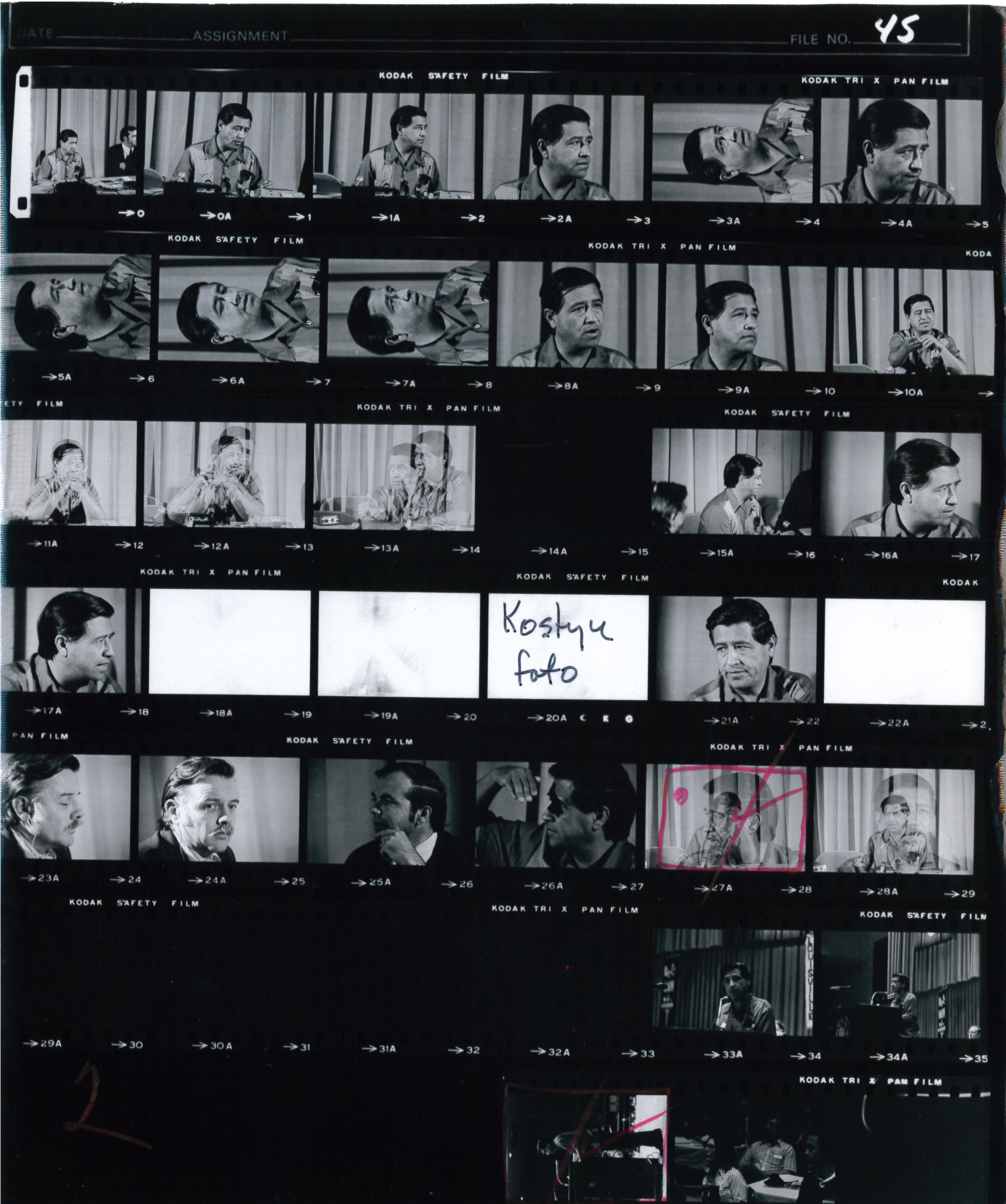 Recognizing after five years of struggle that the farm labor struggles in California would fail without nationwide action, Hartmire applied the national pulpit of Presbyterianism to the movement. This new effort, established jointly by Presbyterians and Congregationalists in 1970 would be the National Farm Worker Ministry. Hartmire would continue to rally Christians' attention to la causa until going to work full-time for the UFW in 1980, passing the baton to Fred Eyster.

A response to the farm workers movement, from Record Group 149, box 3, folder 12.

National staff of the UPCUSA for their part contended with diverse expressions of outrage toward the church's positions on issues of social justice. R. H. Ankeny of Apollo, Pa. wrote to the stated clerk Bill Thompson, in 1974, "Boycott? SURE!! Note: I'll eat whatever grapes I wish. Don't tell me not to! NEVER!!!! As I see things we should keep out of Rhodesia & S. Africa's business. Much of our money is going to support NCC & WCC & the guerrilla outfits in Africa & other lands (I'm told & I read so.)" The Layman in its coverage of the 1974 assembly was more subtle, conflating the National Farm Worker Ministry with the NCC: "Mr. Hartmire, who has been a close associate of Cesar Chavez from the beginning, is Director of the National Farm Worker Ministry of the National Council of Churches, to which Council the United Presbyterian Church contributed $1,985,046 in 1973." 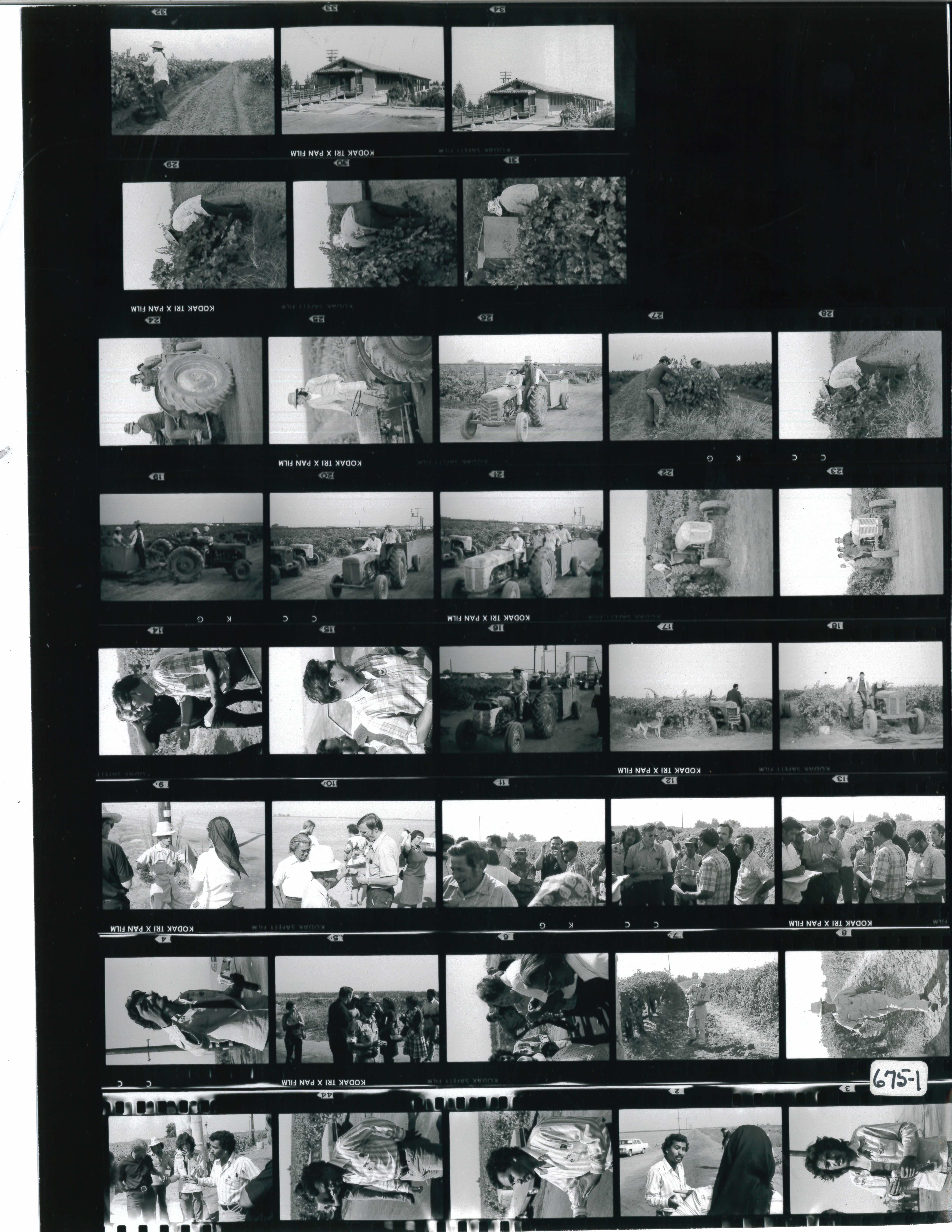 California would ultimately pass legislation establishing a Farm Board to ensure fair and secret balloting in farm worker union elections. In 1976 growers of the San Joaquin valley successfully pressured the legislature to defund the Farm Board, prompting a national boycott of Sun Maid raisins and Sun Sweet prunes. Hartmire and the NFWM worked alongside Chavez and the UFW on a state referendum to restore funding to the Farm Board, which succeeds that fall.

By the early 1980s, some 40,000 workers gain union protections through UFW. Chavez passed away in April 1993, mourned by more than 40,000 marchers. The struggles for just immigration policy, fair pay, and livable working conditions on America's farms continue today.

RG 300.1, Board of National Missions Office of the General Secretary Records. Includes records of the California MIgrant Ministry, 1965-1971.