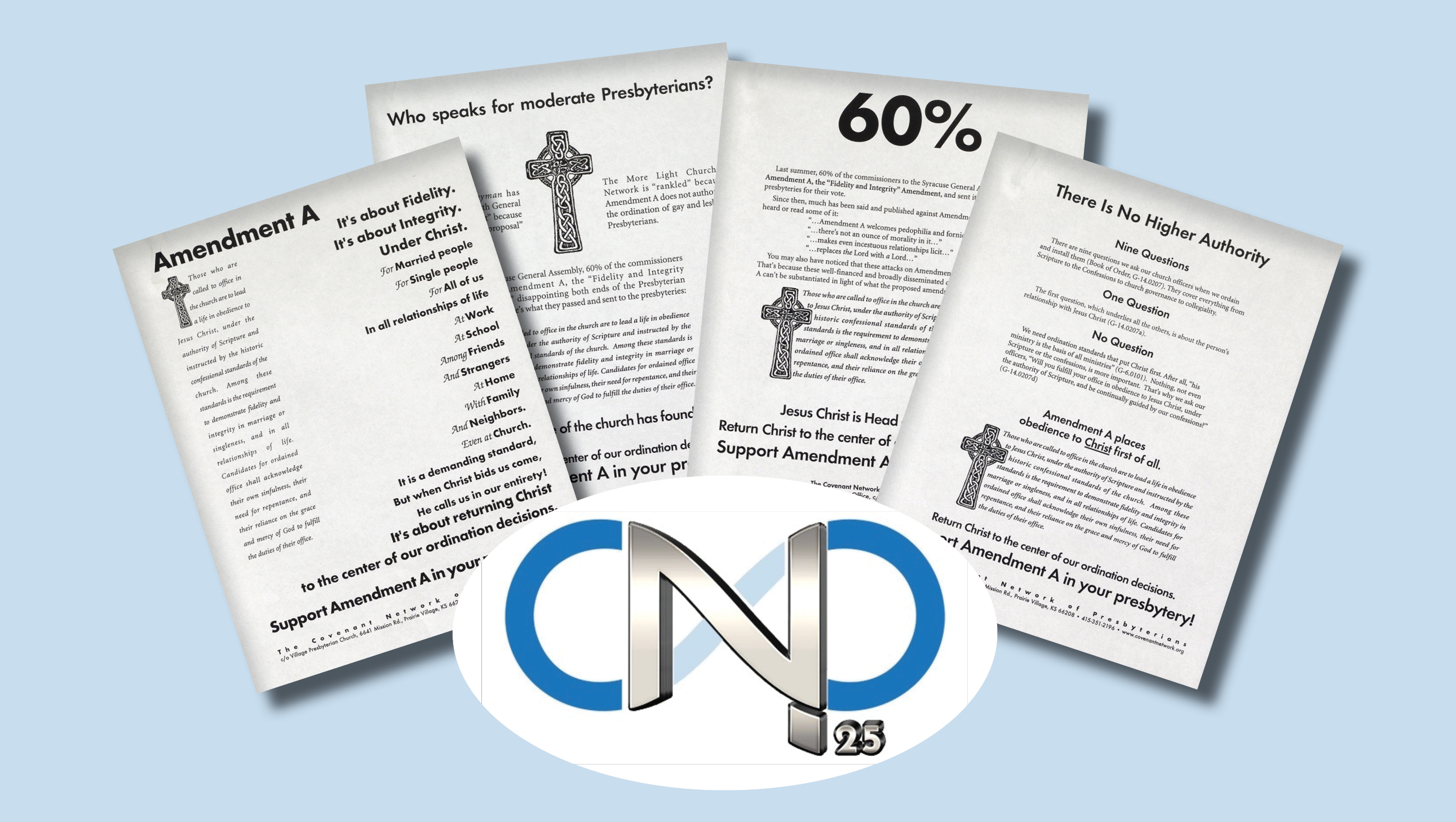 You’ve probably heard it by now, but it begs repeating: the Covenant Network of Presbyterians is celebrating its 25th anniversary this year. In connection with this commemoration, the staff at the Presbyterian Historical Society have been learning more about the people, events, and history of the organization by exploring the Covenant Network records in our collections and listening to recounted memories of Pam Byers. When asked to draw up a blog post inspired by archival collection RG 531, my mind focused on one question surrounding the groups’ efforts: what did their advertisements look like?

As I was familiarizing myself with the Covenant Network’s goals and efforts, I began thinking about language. What kind of eye-catching headlines could be used to persuade Presbyterian congregants to 1) stop to read a flyer and 2) begin turning the gears inside their minds toward changing perspectives of their LGBTQ pewmates? I majored in English during my undergraduate career—hence my fascination with syntax, sentence structure, and diction—and took a course in the History of Visual Culture in my graduate studies—hence my curiosity over their marketing tactics. With these queries bouncing around my brain, I began my search for Amendment A adverts in the records of the Covenant Network of Presbyterians.

First Push for Amendment A

The Covenant Network kept their flyer designs simple when they first began printing out adverts regarding Amendment A. With a message as urgent and heavy as theirs, a low-key, black-and-white, text-focused layout was critical.

The statement, “It’s about returning Christ to the center of our ordination decisions,” became a recurring motif on the flyers produced by the Covenant Network, during this first phase of persuasion as well as the later flyers published after Amendment A failed to be passed. 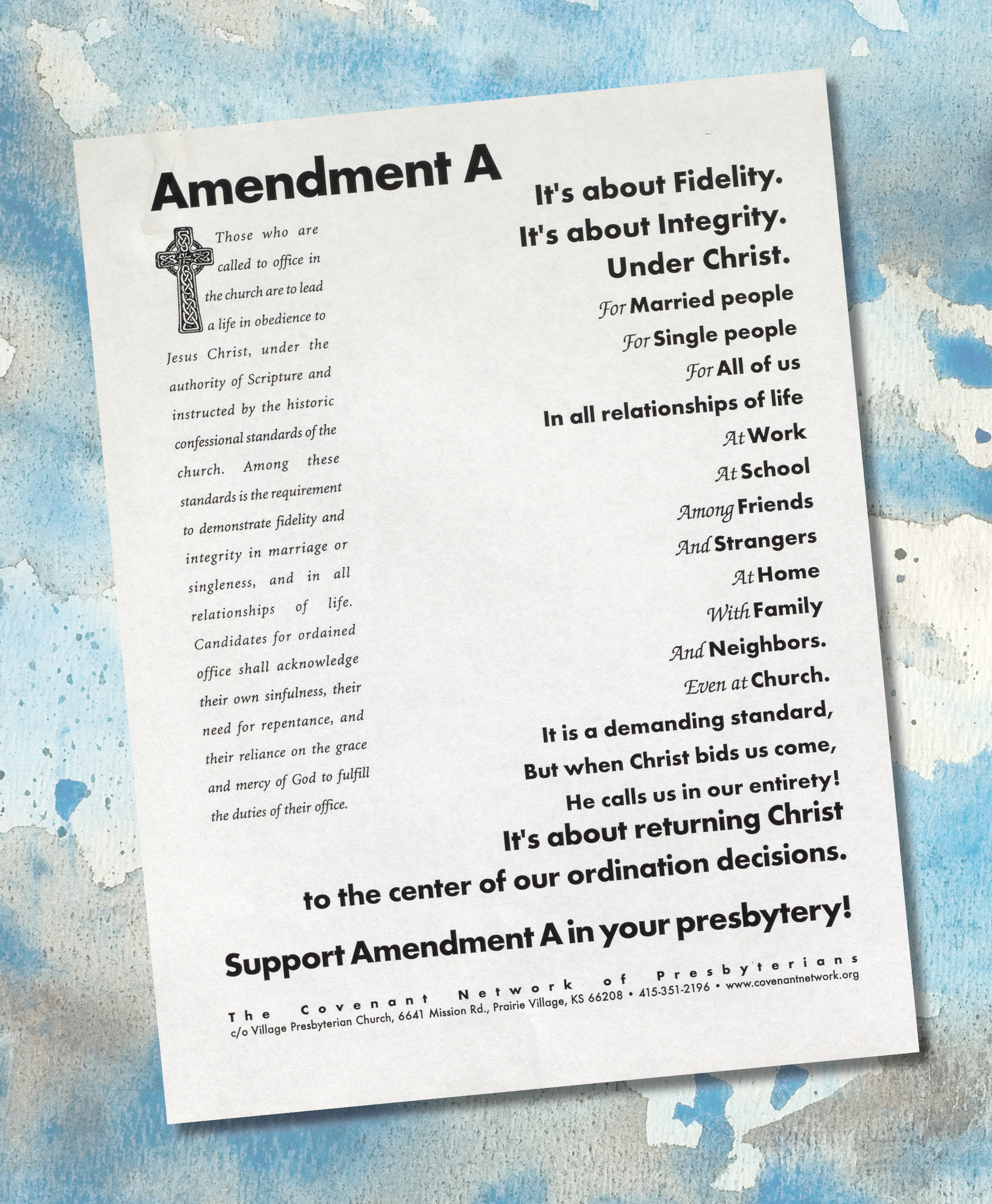 Universal language. Amendment A is written out on the left third of this flyer—typically, Covenant Network included the full text on each of their adverts, in order to both familiarize their audience with the language and to show them how it differed from that of Amendment B. Covenant Network emphasized the universality of their proposed fidelity-integrity amendment (as opposed to the fidelity-chastity amendment). By stressing that Amendment A was full of language that was inclusive of all—the reader included—they simultaneously emphasized that its passing wouldn’t just affect the LGBTQIA+ congregants. Rather, the amendment created standards to be upheld by all—as is shown in the bolded text on the right that reads, “For married people, for single people, for all of us. In all relationships of life…” 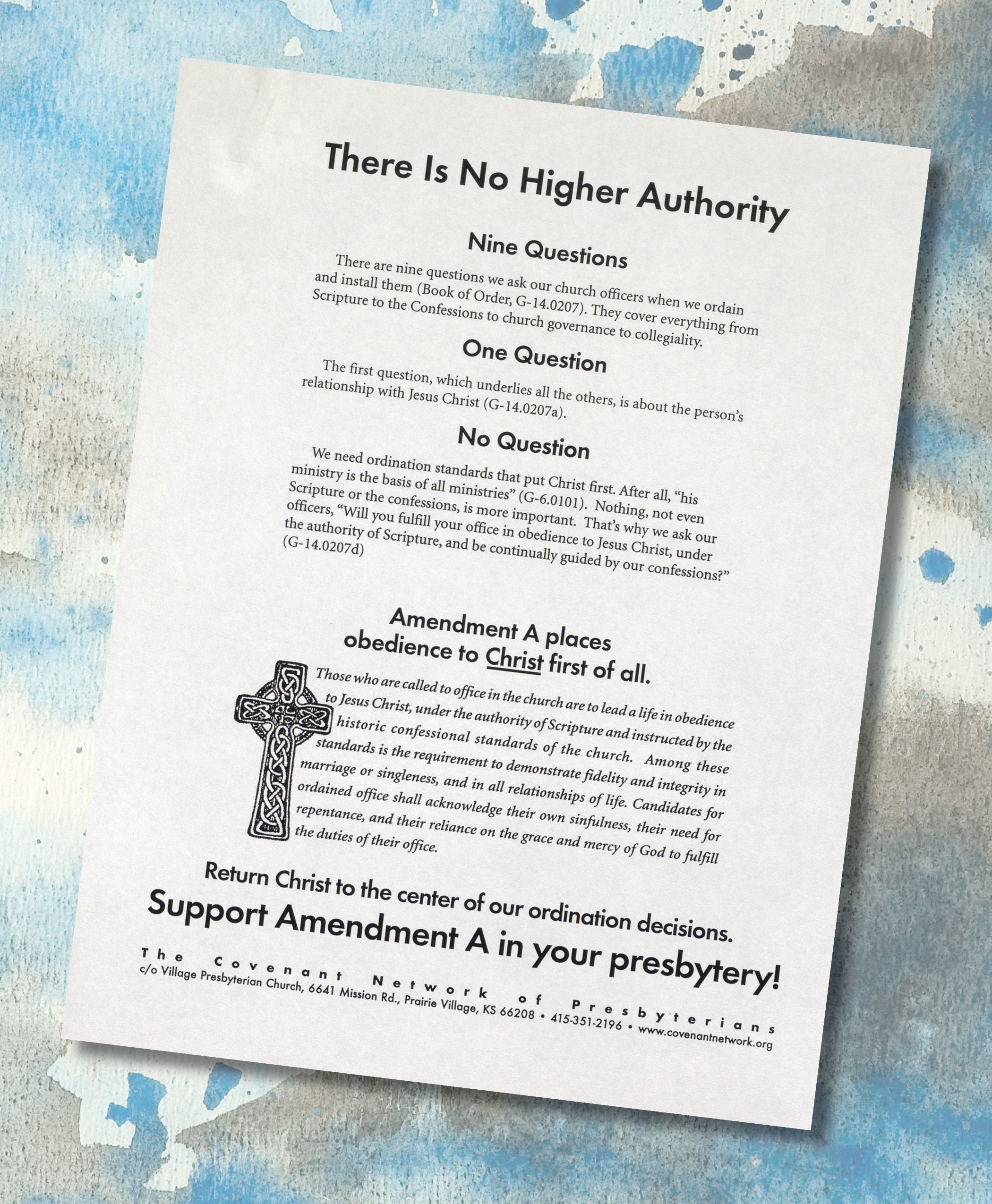 No question. Supporters of Amendment A argued that the most important question in the ordination process shouldn’t concern the candidate’s relationships with other humans. Rather, the focus should be on the question “which underlies all the others”: that which concerns the candidate’s relationship with Jesus Christ. For Covenant Network Presbyterians, there’s no question over what should be prioritized in the ordination process—and there’s no necessity for the questioning of the candidate’s personal, private relationships. This advertisement suggests that, unlike Amendment B, “Amendment A places obedience to Christ first.” It asks the reader: do you agree with the decentering of Christ that Amendment B is encouraging? 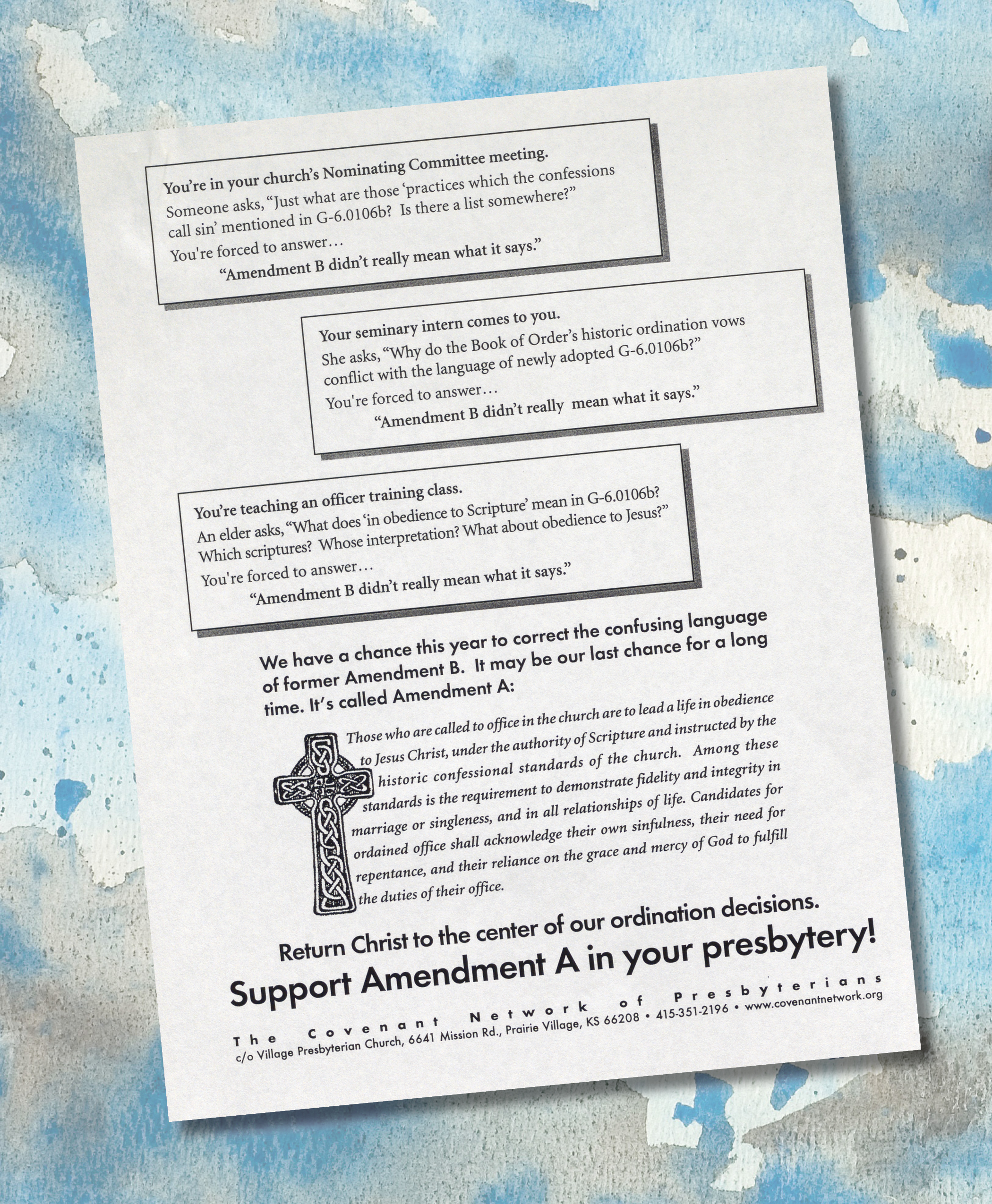 Sticky situations. This flyer serves as encouragement for those who were feeling disheartened or confused following the failure of Amendment A. It offers words of encouragement, while assuring the reader that the discussion is far from over. After this initial failure, Covenant Network urged Presbyterians on all sides to remain in the church, remain open to their fellow congregants, show compassion to those around them, and to remain in prayer. The flyer highlights upcoming Covenant Network gatherings, comforting the reader while gently nudging them to attend an in-person meeting.

Where do we go from here?” Failure of Amendment A

The Covenant Network of Presbyterians fought for the ratification of Amendment A for years and years. When the initial push for the passage of the amendment failed, they changed their language, their design, and their focus. Through it all, they remained adamant, persistent, and dedicated—never discouraging. They offered a safe space for those who were saddened and disappointed by the failure of Amendment A to gather and discuss next steps. 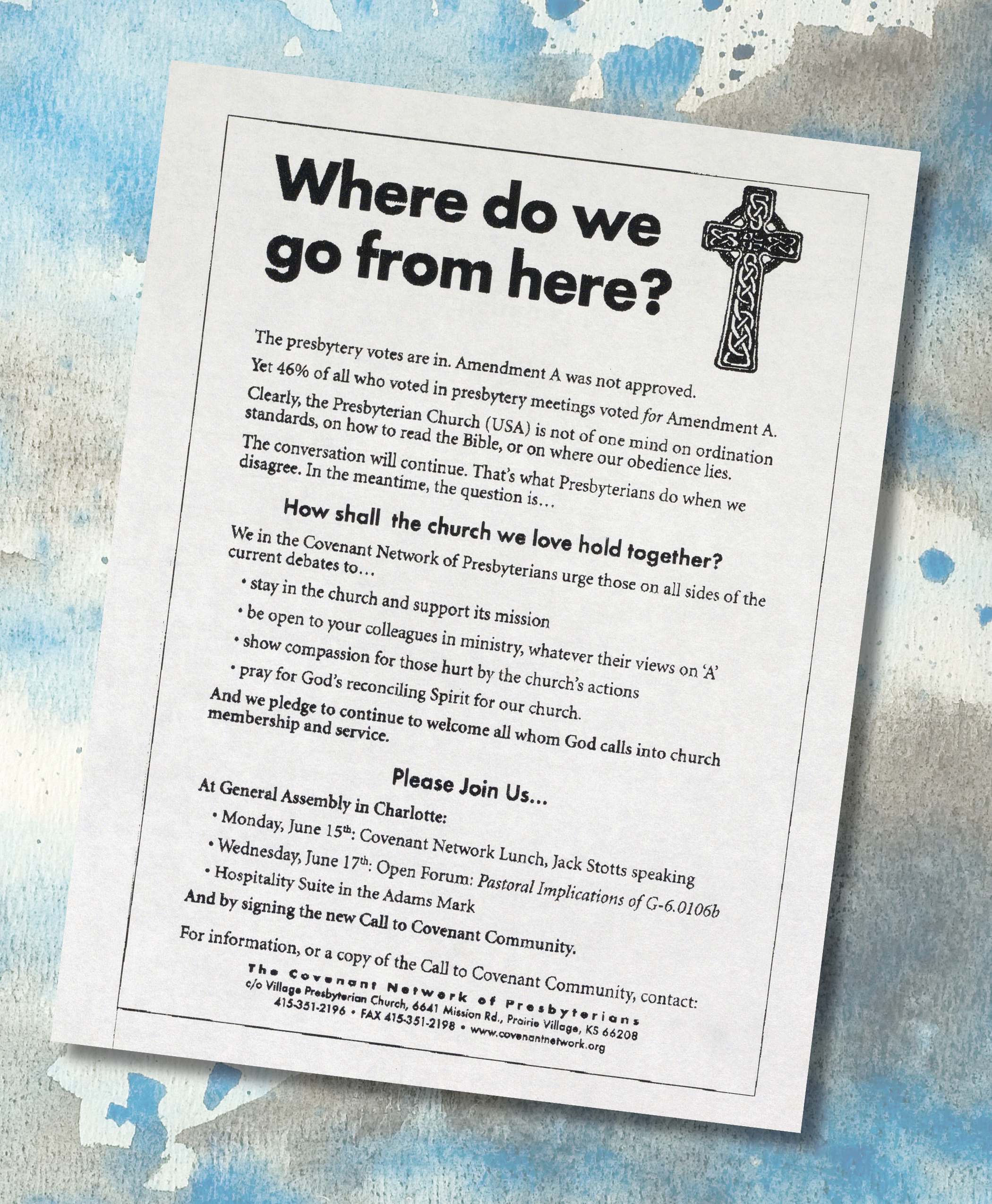 The conversation will continue. This flyer offers its readers three hypothetical situations that they could, inevitably, find themselves faced with in the aftermath of the passing of Amendment B. What if you’re teaching an officer training class, and a student comes forward asking you about the discriminating language in Amendment B…what would you do? The answers to each question raised in these hypotheticals are the same: “You’re forced to answer…Amendment B didn’t really mean what it says.” You don’t want to be faced with these situations, do you? With no true answer? The solution offered by the Covenant Network is simple: let’s correct the language. Words are power, after all. 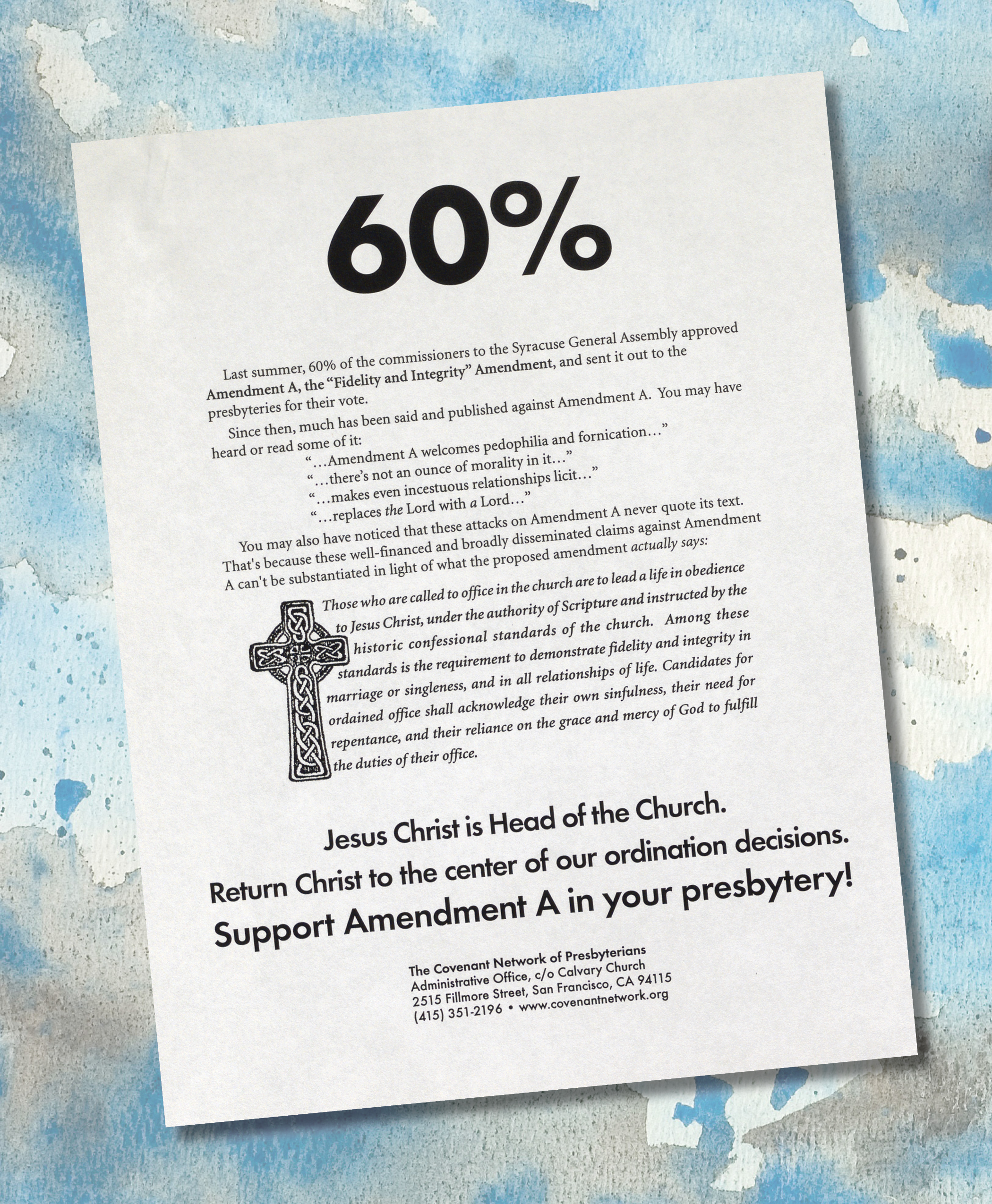 We're getting closer. After Amendment A failed another time, the Covenant Network changed their tune a bit. In the last flyer, it was shared that 46% voted in favor of Amendment A. This flyer proudly boasts a 14% uptick in votes—the number is bolded, highlighted, and presented front-and-center. As the conversation continued on, year after year, Covenant Network—and other organizations fighting for LGBTQIA+ ordination rights—faced backlash from those who disagreed with Amendment A. With this flyer, the Covenant Network encourages supporters and confirms progress has been made toward the approval of Amendment A, even in the face of dissent. 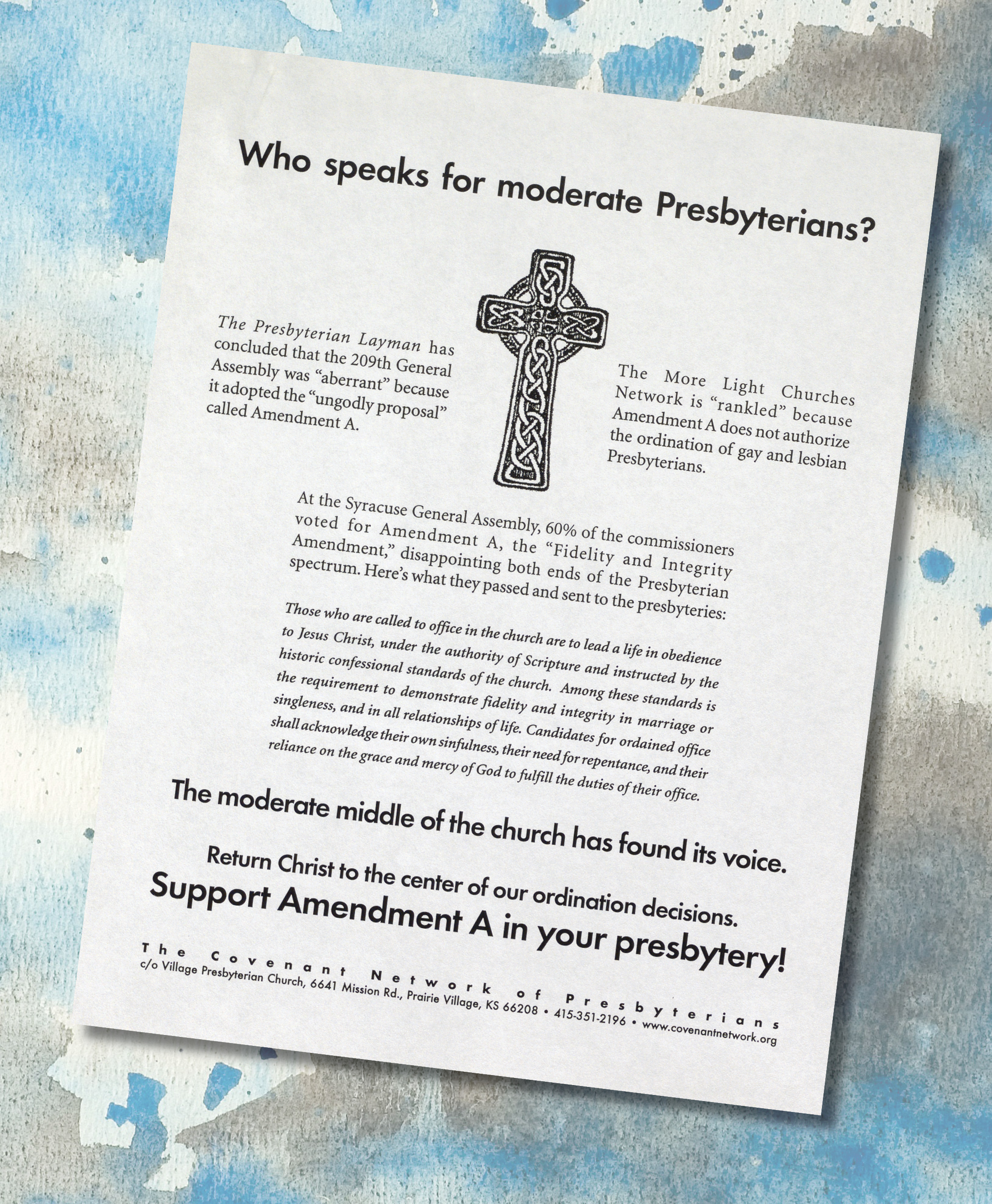 Search for middle ground. The language introduced in this flyer would become a focal point of Covenant Network communications in the years to come. After Amendment A continued to fail, the organization and its supporters came to a sort of compromise—they began to market themselves as a neutral ground, a group that gave voice to the “moderate middle of the church.” By becoming a Switzerland of sorts, Covenant Network and Amendment A could, perhaps, be a little easier to swallow.

In its 25 years, the Covenant Network has accomplished—and continues to accomplish—a lot. Since its founding in 1997, the organization and its members worked to facilitate dialogue, present at General Assemblies, and strategize with local Covenant Network chapters for the successful passage of Amendment A. Finally, in 2011, the inclusive language of Amendment A was passed and incorporated into the Book of Order. The fight didn’t end there. Covenant Network continues to focus on creating unity amongst Presbyterians, bringing together disagreeing parties and bridging the gap between sides. The Presbyterian Historical Society is happy to stand alongside Covenant Network as they celebrate their 25th anniversary.