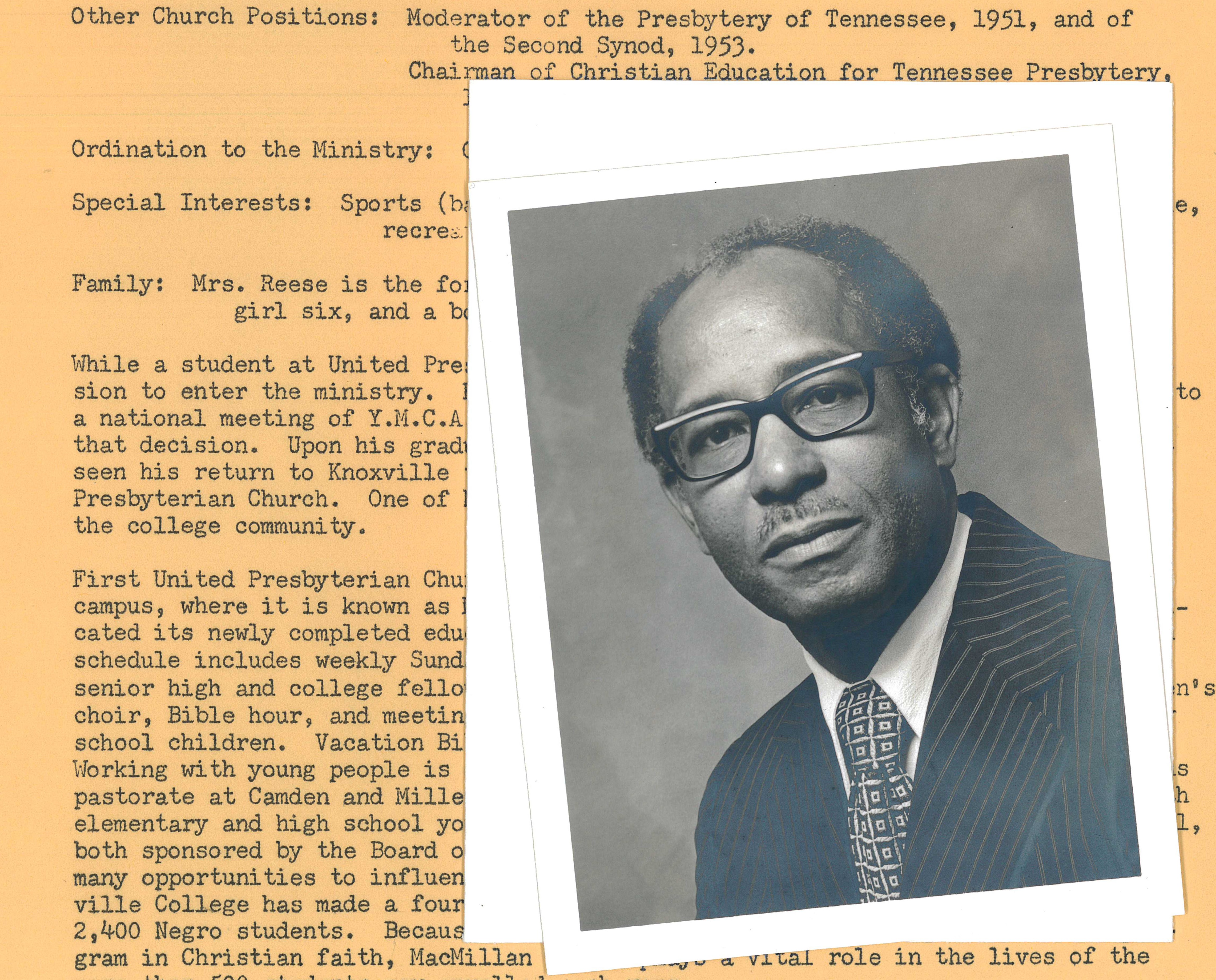 One night in 1964 James Foster Reese, pastor of First United Presbyterian Church on the campus of Knoxville College, sped down a Wilcox County Alabama highway, ferrying two injured white ministers to safety in Selma. He killed the headlights and didn't stop. The men in the back, Geddes Orman and Alexander Stuart, were with Jim as a delegation of Union Presbytery visiting Black Presbyterian churches, had been identified as "agitators" and severely beaten by the owner of the hotel they were staying at.

Jim would use that night as a benchmark for future trouble in his life. "Budget deficit? Not bad. Loss of members? Not bad. No promotion? Not bad. Bad is driving down an Alabama highway in the middle of the night with no lights and never touching the brakes."

In the early morning of June 17 2022, this preacher, teacher, and relentlessly joyful presence died. He was 98 years old.

Born in Harrodsburg, Kentucky, Jim lost his mother at a young age and was raised in a large extended family. He grew up active in the YMCA and the Student Christian Movement. While at Knoxville College in the 40s, he felt equally pulled toward careers in education, medicine, and ministry. A visit to the national YW&YMCA conference in Riverdale New York, in 1945, cemented his call: "Here were leaders who were ministers but who were playing softball, doing those active things that were not ordinarily done by ministers in my home area. Here I saw a definite way how one's Christianity could be lived out and that enjoyment was a necessary part of being a Christian."

Jim graduated from Pittsburgh-Xenia Seminary in 1949 and was ordained by the UPCNA Presbytery of Tennessee that October. Neola Parrish married him on May 13 1951, and the couple raised three children, Mildred, James, and Foster.

Click the video above to hear how Rev. Jim Reese's background as a Presbyterian seminarian helped him advocate for voting rights.

He served three yoked churches in Wilcox County, Alabama for ten years, serving among poor Black farm workers. "Here I learned that preaching and worship must be for those of limited educational and economic background as well as for those who have been blessed in those areas."

Jim attempted to register to vote in 1956, and tells of the purely bureaucratic refusal of the election officials in Camden Alabama. He asked a registrar “I would like to get a form to register to vote,” a long silence followed. “I don’t know what you are talking about,” one registrar said. Another long silence was broken by the words, “You have to speak to the probate judge.” I went to the probate judge and asked for the registration form. His reply was similarly dismissive: “I don’t have them.”

In late 1958 Jim returned to the campus of Knoxville College to serve First United, a ministry characterized by joy and struggle. As pastor Jim was a "bringer of good tidings," a mentor and teacher, someone who sought to lift up the talents of young people. He also marched and protested alongside Knoxville College students and residents during the sit-ins of 1960. Before each sit-in, participants would gather to worship. "We invoked the presence of God with each effort we made. Members of Black congregations provided most of the persons who participated in the struggle, took the insults, received the physical assaults and yet stayed committed to the cause."

The education and continued development of the Black pastorate would be a lifelong calling. Jim left Knoxville College to serve in Christian Education roles with the Synod of Catawba, the UPCUSA Board of Christian Education, and finally as director of the PC(USA) Racial Ethnic Ministry Unit. After retirement Jim served as a presbytery executive in New York City, Detroit and Newark, and as pastor of Germantown Community Presbyterian Church in Philadelphia.

Nancy J. Taylor, Executive Director of the Presbyterian Historical Society, had the pleasure of working with Jim when he served on the PHS Board and Advisory Council. "Jim lived such a rich and full life. His words, ideas, and actions positively impacted so many people.” Taylor continued, “Jim knew how important archives are to setting the historical record straight."

PHS's Luci Duckson-Bramble remembers Jim from her time in Germantown Community Presbyterian Church: "He was such a caring, loving, and gracious man who was and will always be beloved by the members of Germantown. He and Neola truly served as a team, and Jim was the perfect spiritual guide for my brother through a very difficult time. God Bless Jim Reese."

The legacy of Jim’s work and the impact he made across the denomination is apparent.

"Jim had so many lives, he would re-invent himself so many times," says Rev. Dr. Rhashell Hunter, a successor of Jim's in PC(USA) Racial Ethnic & Women's Ministries. "He was a mentor and a model for so many, and did it with a smile on his face."