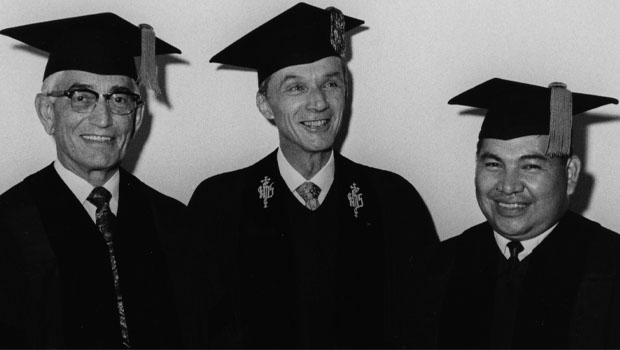 The Cecil Corbett Papers have been processed as Record Group 535, and the guide to the records is now available: https://www.history.pcusa.org/collections/research-tools/guides-archival-collections/rg-535

Rev. Dr. Cecil Elwood Corbett ("Speaking Eagle") was born on the Cherokee Indian Reservation in Cherokee, North Carolina on March 4, 1931. He was a member of the Nez Percé Tribe of Idaho. He attended Wahpeton State School of Science (North Dakota State College of Science) and Cook Christian Training School (CCTS; Phoenix, Arizona campus) before receiving a Bachelor of Arts from Huron College in South Dakota in 1957. While attending CCTS, he met Irene Blatchford. The two married on December 29, 1951, and they were members of First Presbyterian Church in Kamiah, Idaho. Before entering seminary, Corbett served Ascension Presbyterian Church in Peever, South Dakota under the Board of National Missions for several months in 1955. During seminary, he worked as a student pastor at Bloomington Congregational Church in Bloomington, Wisconsin. He graduated from the University of Dubuque Theological Seminary in Iowa in 1962. He was awarded honorary Doctor of Divinity degrees by Huron College in 1968 and by Dubuque Theological Seminary in 1972. 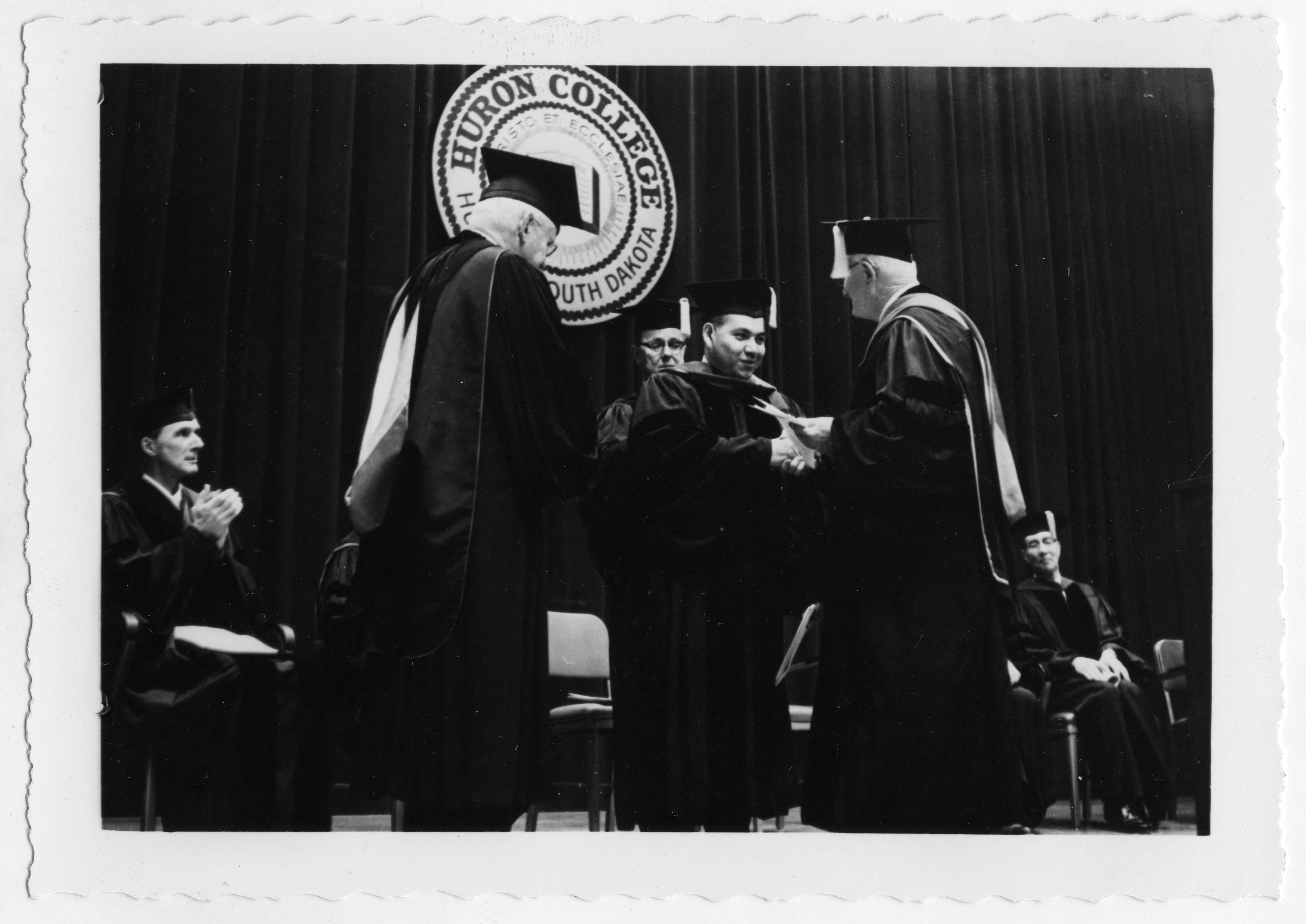 After seminary, Corbett served First Presbyterian Church in Flandreau, South Dakota, where he worked among the Santee. In 1963, he received a call from the Pima First Presbyterian Church in Sacaton, Arizona, to serve among the Pima on the Gila River Indian Reservation, now known as the Gila River Indian Community. In 1967, Corbett became associate director of the Cook Christian Training School program at the campus in Tempe, Arizona. The following year, he was promoted to the position of executive director. He served in that position until 1989, when he became chancellor. 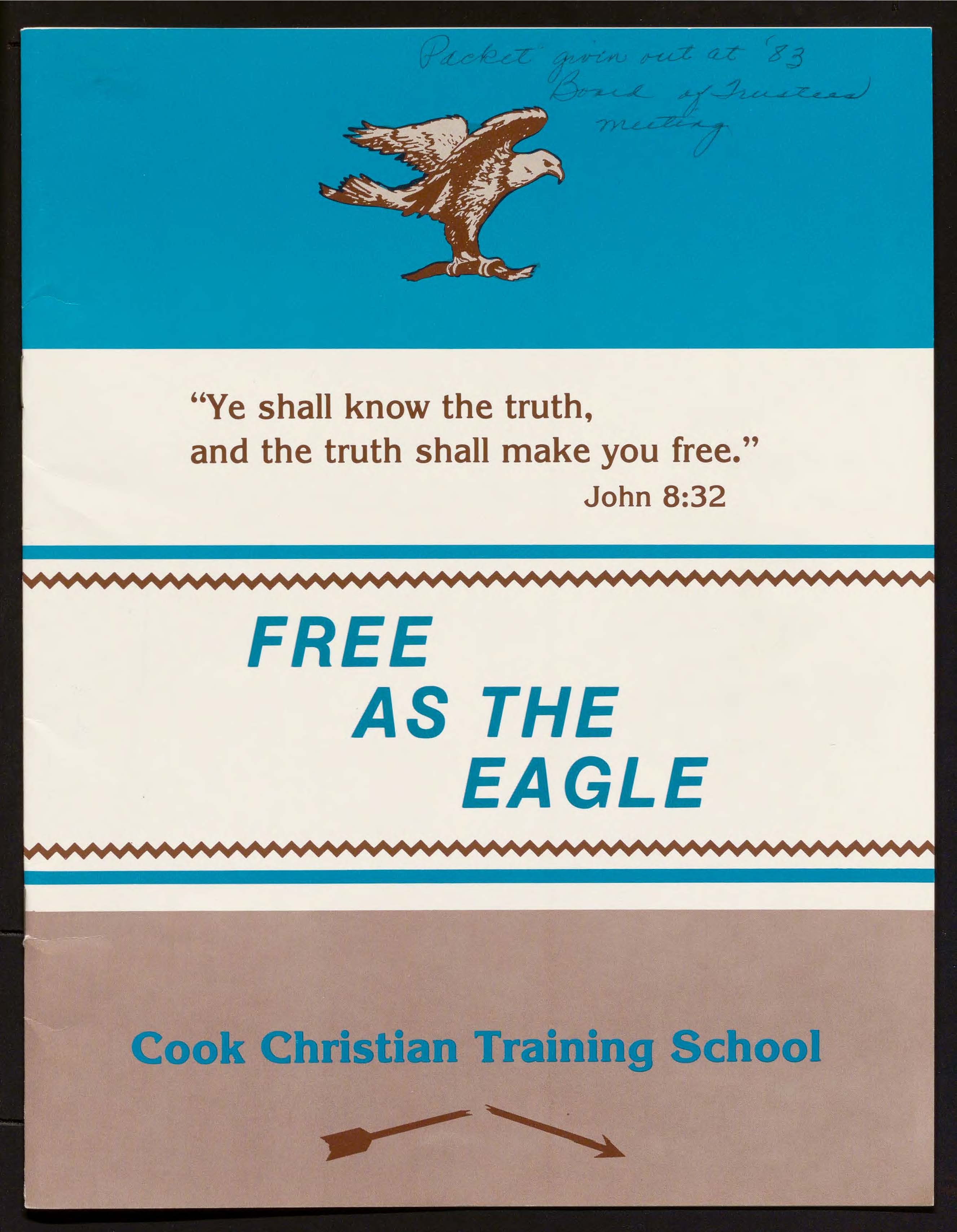 Corbett served the UPCUSA and the PC(USA) in a variety of roles and functions. While serving as "Consultant for Ministries with Indians," he participated in the formation of the Consulting Panel on Ministries With Indians (part of the Council on Church Strategy and Development, Board of National Missions, UPCUSA) in 1970. The Panel sought to bring together Presbyterian Church leaders from Native American communities to provide consultation regarding mission strategy in relation to the needs and opportunities of Native Americans. Around 1973, the Panel effectively became the Native American Consulting Committee (NACC) of the Program Agency. NACC was originally composed of five members from specific synods (synods of the Southwest, the Sun, Alaska-Northwest, Pacific, and Lakes and Prairies) and seven members at large. 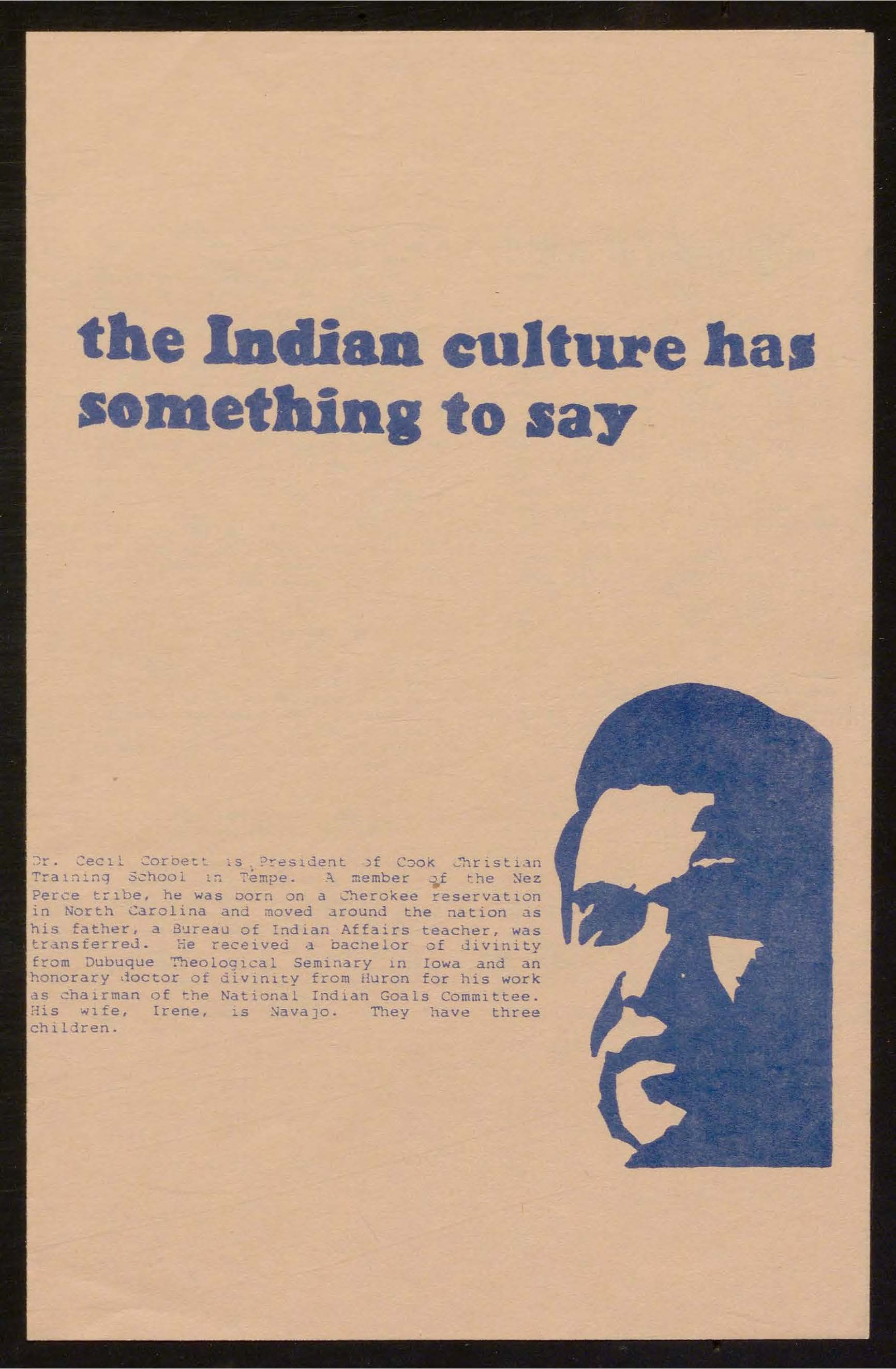 Corbett's roles at CCTS and in NACC led to his participation in the establishment of the Native American Theological Education Consortium (NATEC; circa 1976). Created through the Presbyterian Church's Major Mission Fund, NATEC sought to develop and train Native Americans for ministry through Theological Education by Extension (TEE). The Consortium was originally comprised of CCTS, Huron College, and Dubuque Theological Seminary. Corbett also participated in the formation of the Native American Theological Association (NATA) in 1977, an ecumenical organization that sought to function as an agency of Native American communities to facilitate the accreditation of related educational programs and of candidates for ordination through their respective denominations.

Additionally, Corbett was a member of the executive committee of the Council on Church and Race (COCAR; UPCUSA), field associate for the Board of National Missions (UPCUSA), and moderator of the Presbytery of Phoenix (1970). He held several titles and roles within the National Council of the Churches of Christ in the U.S.A. (NCCC), including chairperson of the National Indian Goals Committee. 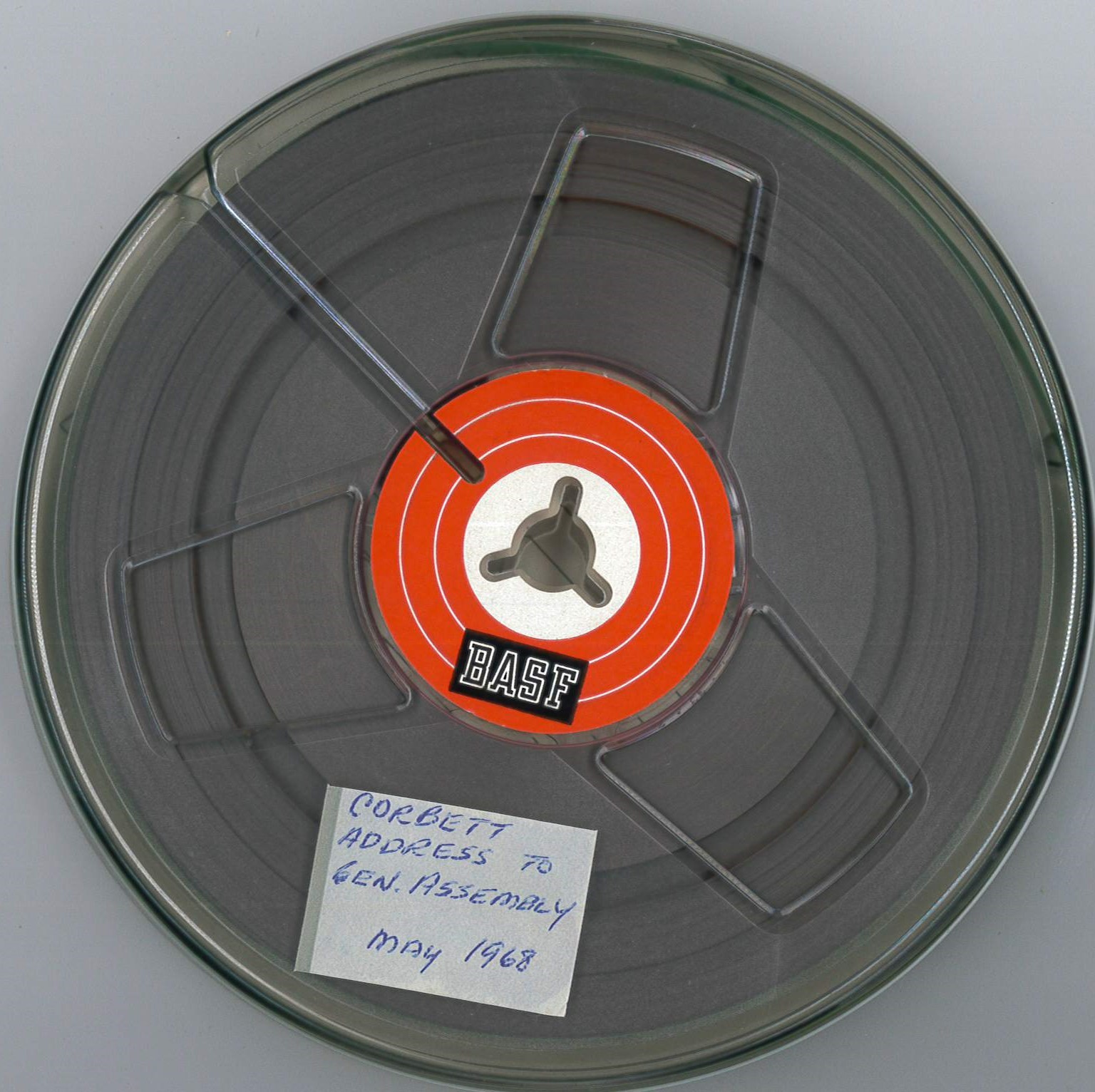 The processed collection totals 19 boxes. The collection’s scope chiefly covers Corbett's professional career and his roles within the UPCUSA and the PC(USA). Additional scope coverage includes Corbett's career in higher and theological education, his involvement in ecumenical organizations, and his activities with other national, regional, and local organizations that represent and serve Native Americans. The materials are primarily in English, but there are some Spanish and Japanese language materials as well.

The collection includes three series. Series I, UPCUSA / PC(USA) Files, circa 1951-1993, chiefly contains materials documenting Corbett's work within and associated with the Presbyterian Church and some ecumenical entities. This includes Corbett's involvement in the creation, work, and activities of the NACC, NATEC, and NATA. Other Presbyterian Church entities documented in the series include the Board of National Missions, COCAR, and the General Assembly Mission Council (GAMC). Other ecumenical entities documented in the series include the Joint Strategy Action Committee (JSAC) and the NCCC. Materials include correspondence, ephemera, financial documents, memoranda, minutes, policies, printed materials, proposals, and reports.

Series II, Higher / Theological Education Files and Subject Files, 1935-2002, contains files of correspondence, ephemera, financial documents, minutes, memoranda, proposals, reports, and other records chiefly documenting Corbett's career in higher education and his involvement in national, regional, and local organizations that serve and represent Native Americans. Corbett's time at CCTS is documented, as well as his work with the National Fellowship of Indian Workers (NFIW) and the National Indian Training and Research Center (NITRC).

Series III, Personal Papers, 1937-1992, contains general files of conference materials, newspaper clippings, other printed materials, sermons, and other writings either created by or collected by Corbett. There is also a small file of biographical items pertaining to Corbett.

Click here to access the guide to the Cecil Corbett Papers and read more about the contents of each series.