Stories of RNS Photos: Back to School 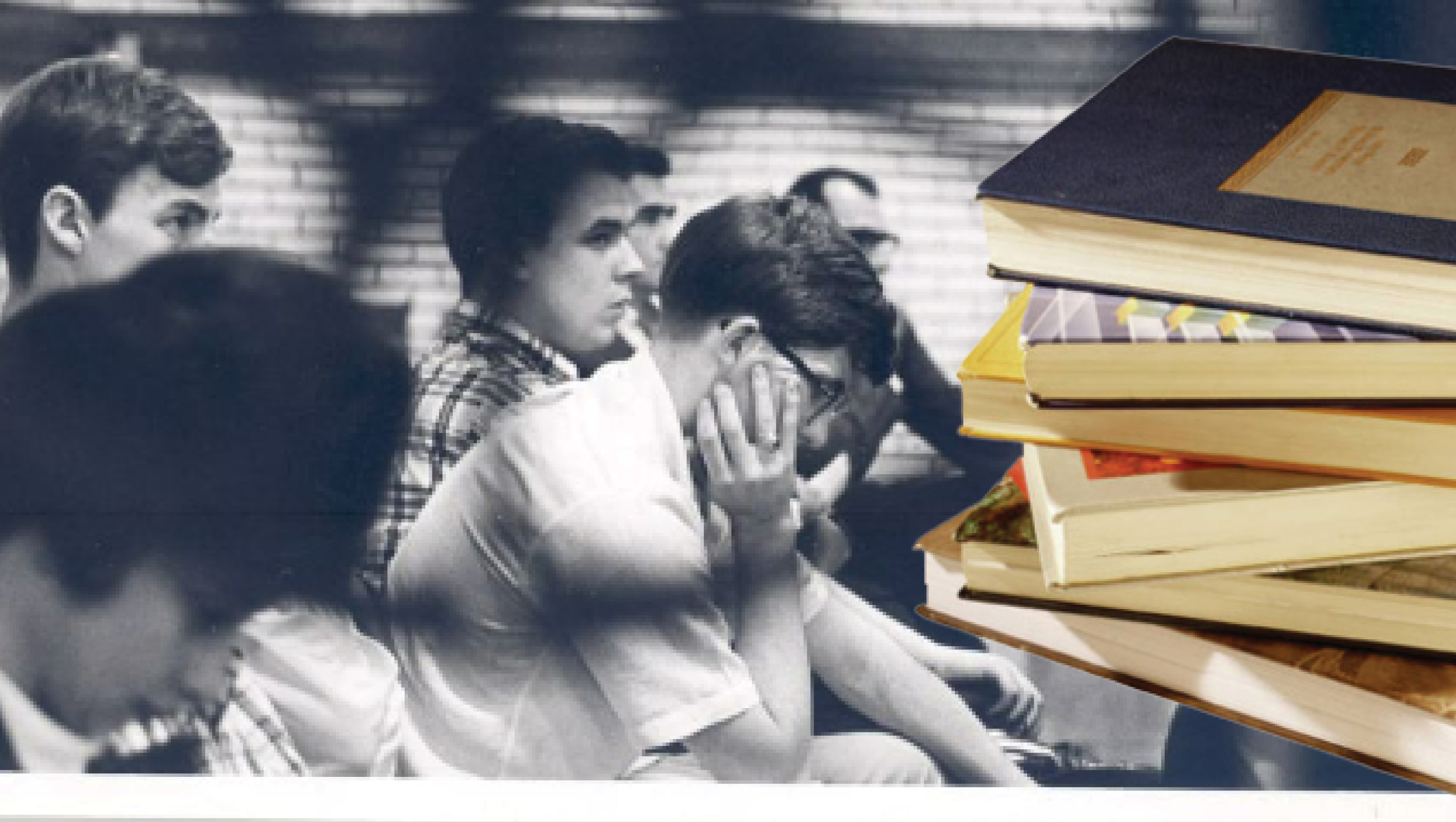 As summer comes to an end and as students and teachers across the United States prepare to go back to school, we’re sharing images from the RNS collection that highlight education around the world. 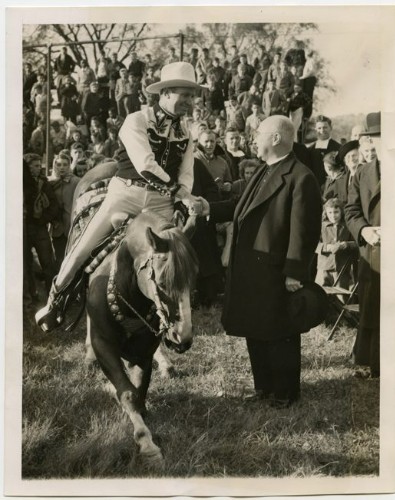 Gene Autry, an American singer and actor known for popularizing country music through his singing cowboy films, rode into Lincoln Hall, a Catholic home and farm school for boys in Lincolndale, New York, in 1948. While on his equally famous mount Champion, Autry is shown saluting Francis Cardinal Spellman, Archbishop of New York. During the visit, Autry and a few other rodeo members performed for the students. 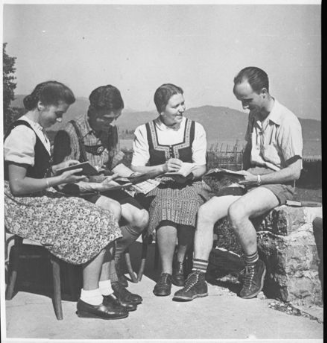 That same year, students from Yale Divinity School were in Walchensee, Germany, studying the Bible with young German children. Karl Baird (right) and four other young Americans students were sent by various denominations through the Church World Service to work with youth in Germany. 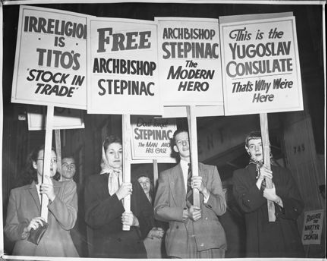 Also in 1948, students from St. John’s University and St. Francis College picketed outside of the Yugoslav Consulate in New York City in protest of the imprisonment of Archbishop Stepinac of Zagreb. The demonstration was sponsored by the Committee for the Liberation of Archbishop Stepinac and took place on the second anniversary of his incarceration. The Archbishop, who was imprisoned by Yugoslav authorities for collaboration with the fascist Ustaše regime during World War II, remains a controversial figure today, as many felt it was a show trial. 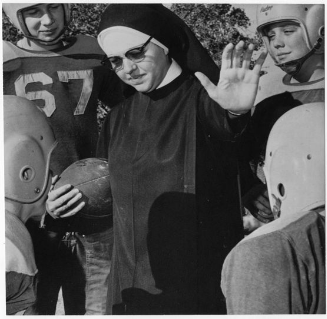 In 1955, at St. Cecilia School in Dallas, Texas, Sister Mary Berchmann showed off her skills as an assistant football coach. At the time, she had been a coach for over 10 years and was instrumental in developing sports at the school. 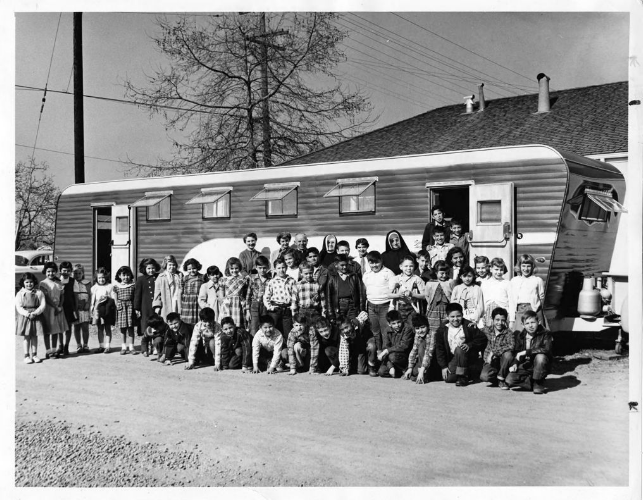 Religious education did not always take place in a stationary school. When faced with a booming congregation of San Francisco commuters, Rev. James B. Doyle of St. Joseph’s parish in Mountain View, California, purchased a trailer to educate the parish’s scattered population. The 2 ½ ton trailer, which seated 55, picked up pupils from San Francisco public schools so that they could attend release-time religious instruction classes. 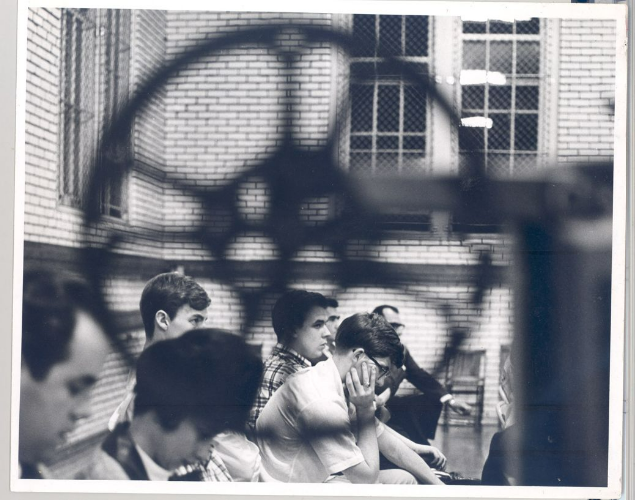 Education was, and still is, intwined with political strife, as was the case during the Vietnam War. In 1967, 150 college students gathered for a 5 ½ hour teach-in at Fontbonne College (now Fontbonne University) in St. Louis, Missouri. Students came from all over the Missouri to discuss the morality of the war, patriotism, Christian pacifism, college draft deferments, and other alternatives for the draft. Over 2.2 million men were drafted from 1964 to 1973. 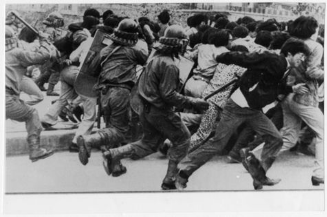 1980 marked a violent year in South Korea, and students were not exempt from this violence. Following a coup by General Chun Doo-Hwan, martial law was enforced throughout the entire country. Universities were forcibly closed, political activities were banned, public gatherings that included more than three people became illegal, and telephone lines had been cut by the military. This photo captures a student-led protest by students near Yonsei University in Seoul on May 13th. The students demanded that the government accelerate political change, allow an election to choose a new president and National Assembly, as well as the resignations of General Chun and other head officials. Riot police were dispatched to dispel the protest. 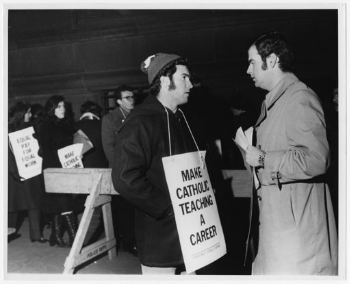 Teachers at Catholic schools in New York City led a month-long strike in 1971 to demand better pay and benefits. On the first day of the strike, Barry F. Ryan (above), president of the Federation of Catholic Teachers, joined others in picketing the Archdiocese of New York. Teachers can also be seen picketing outside of St. Cecilia’s School in Harlem (below) as their union officials negotiated with Catholic officials. 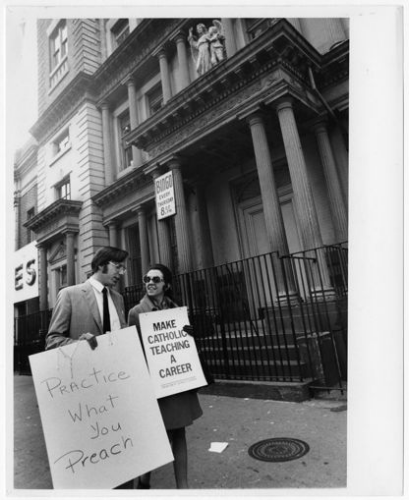