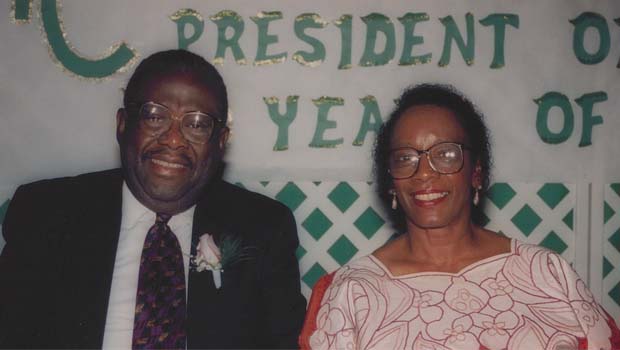 The James and Melva Costen Papers have been processed as Record Group 538, and the guide to the records is now available: https://www.history.pcusa.org/collections/research-tools/guides-archival-collections/rg-538

The processed collection totals 11 boxes. The collection's scope chiefly covers James' election and actions as moderator of the 194th and 195th general assemblies of the United Presbyterian Church in the U.S.A. (UPCUSA), his career as dean of Johnson C. Smith Theological Seminary and as president of the Interdenominational Theological Center (ITC), and his development and fundraising work with the Presbyterian Church of East Africa (PCEA). In relation to Melva, the collection's scope chiefly covers her teaching and higher education career as faculty of ITC as the Helmar Nielsen Professor of Music and Worship and her academic and publishing pursuits. The materials are in English.

James (Jim) Hutten Costen was born on October 5, 1931, in Omaha, Nebraska. He attended Johnson C. Smith University (JCSU) in Charlotte, North Carolina, and graduated in 1953 with a Bachelor of Arts degree. While attending JCSU, he met Melva Wilson, who also graduated in 1953. The two married at the JCSU campus chapel on May 24, 1953. Jim then attended Johnson C. Smith Theological Seminary, receiving a Bachelor of Divinity degree in 1956. He later pursued a Master of Theology degree in religious education at Southeastern Baptist Theological Seminary in Wake Forest, North Carolina, graduating in 1964. Jim was either the earliest or one of the earliest African American students to attend the Seminary.

Jim was ordained by the Presbytery of Cape Fear on January 19, 1956, and he served as pastor of Mount Pisgah Presbyterian Church in Rocky Mount, North Carolina. There in Rocky Mount, Jim and Melva successfully won a lawsuit to integrate an elementary school, allowing their children to attend. The family was threatened by the Ku Klux Klan for their civil rights work. Jim worked closely with Rev. Dr. Martin Luther King, Jr. during the civil rights movement, including organizing King's visit to Rocky Mount in 1962. In 1965, Jim received the call to serve as pastor of the Church of the Master Presbyterian Church in Atlanta, Georgia. He was integral in establishing the church, which was deliberately organized as the first interracial Presbyterian congregation in Atlanta. In 1969, Jim became dean of Johnson C. Smith Theological Seminary, which, under his guidance, had been newly relocated to ITC in Atlanta. He became president of ITC in 1983, serving in that role until his retirement in 1998. In 1974, Jim visited Kenya for the first time, where he built relationships with the PCEA. After his retirement from ITC, he served the PCEA as volunteer director of development. 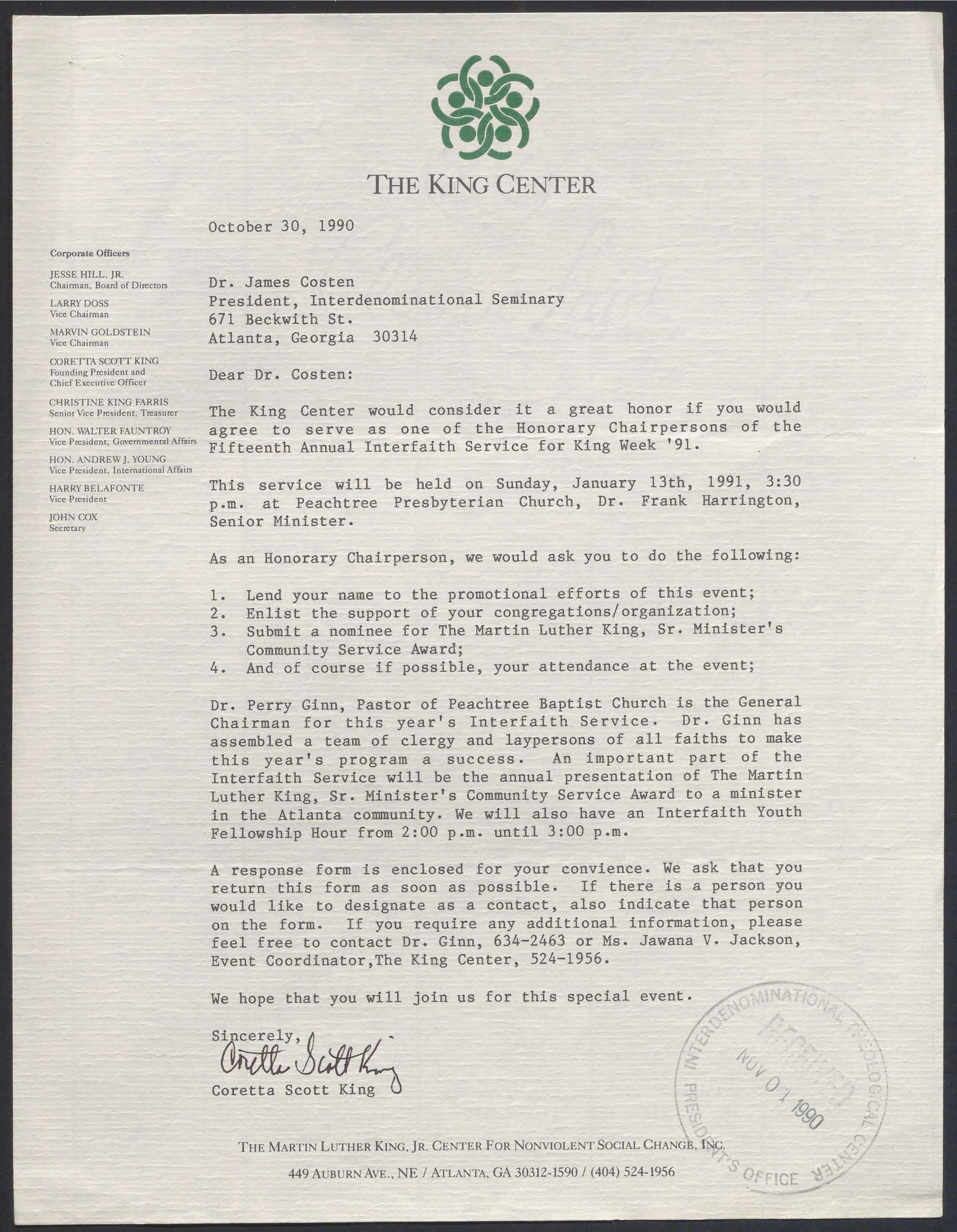 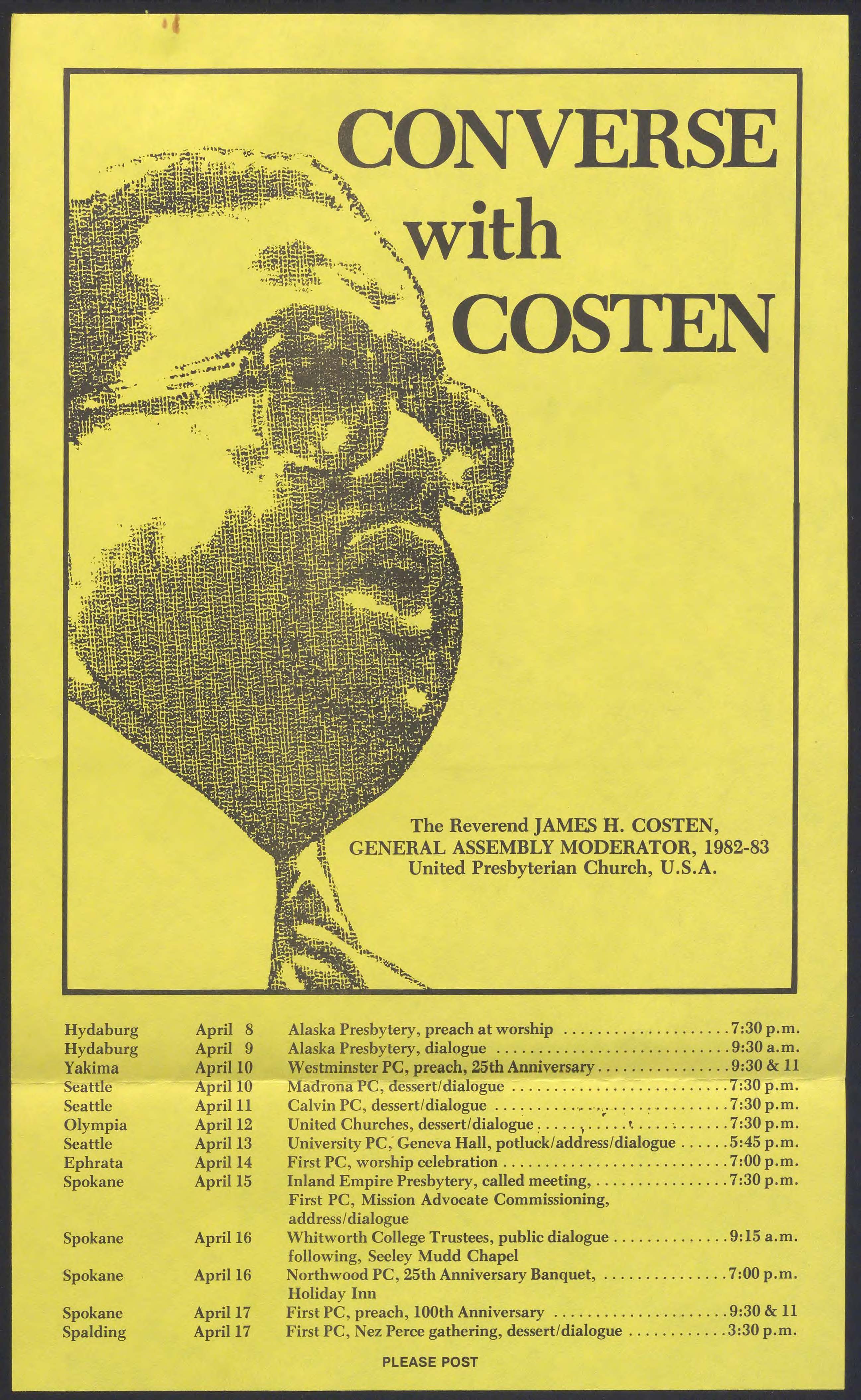 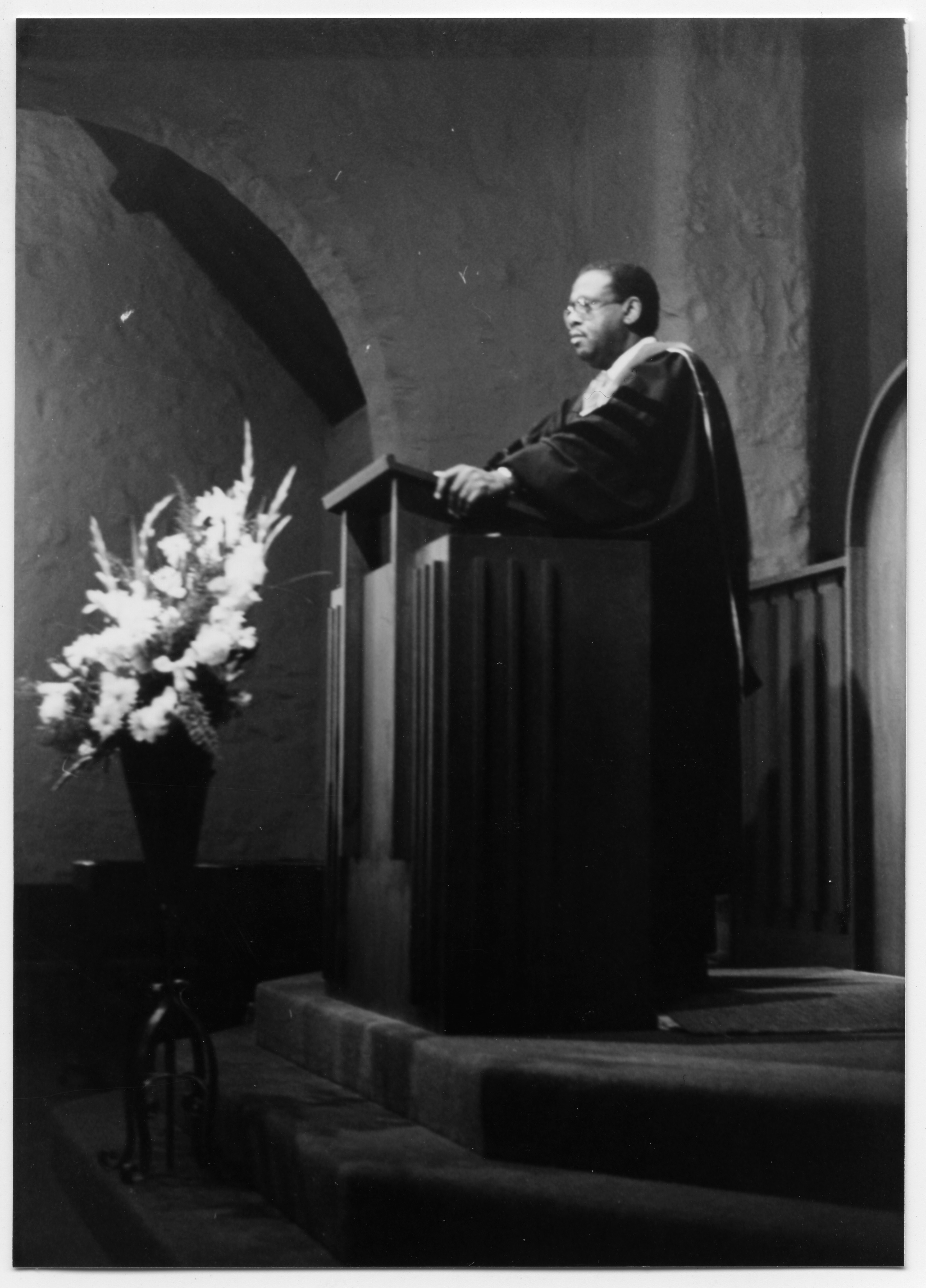 Melva Ruby Wilson was born in Due West, South Carolina, in 1933. She graduated from Harbison Junior College in Irmo, South Carolina, in 1948. Melva obtained a Bachelor of Arts degree in education from JCSU in 1953, a Master of Arts in Teaching Music degree from the University of North Carolina, Chapel Hill, in 1964, and a Ph.D. in Curriculum and Instruction, with music as a cognate area, from Georgia State University in 1978.

When Jim was called to be pastor of the Church of the Master Presbyterian Church in Atlanta in 1965, Melva served as director of music. Melva joined the faculty of Johnson C. Smith Theological Seminary at ITC in 1973 and became the Helmar Nielsen Professor of Music and Worship in 1987, also directing the Center Chorus. She retired in April 2005 and later became Visiting Professor of Liturgical Studies at the Yale Institute of Sacred Music. 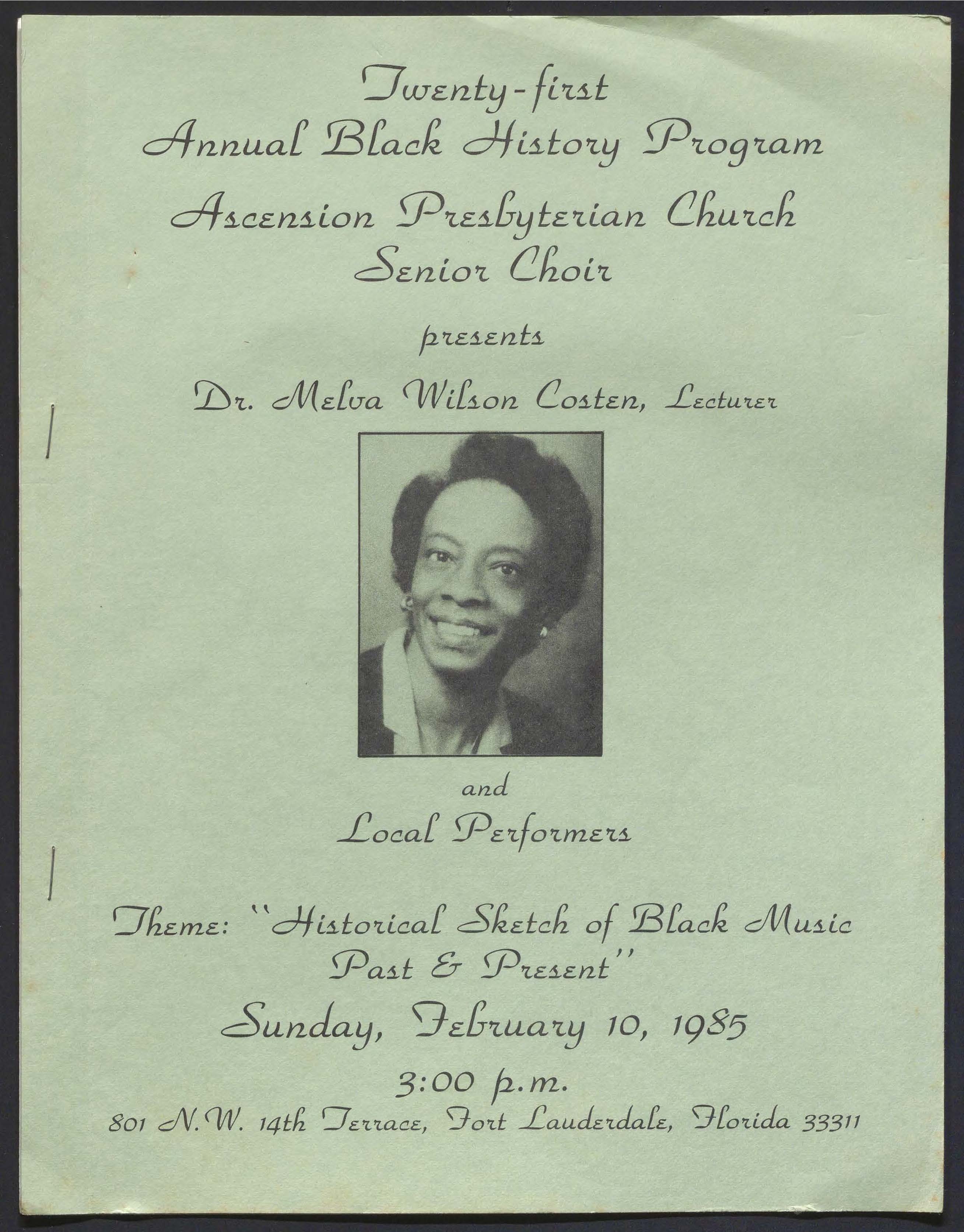 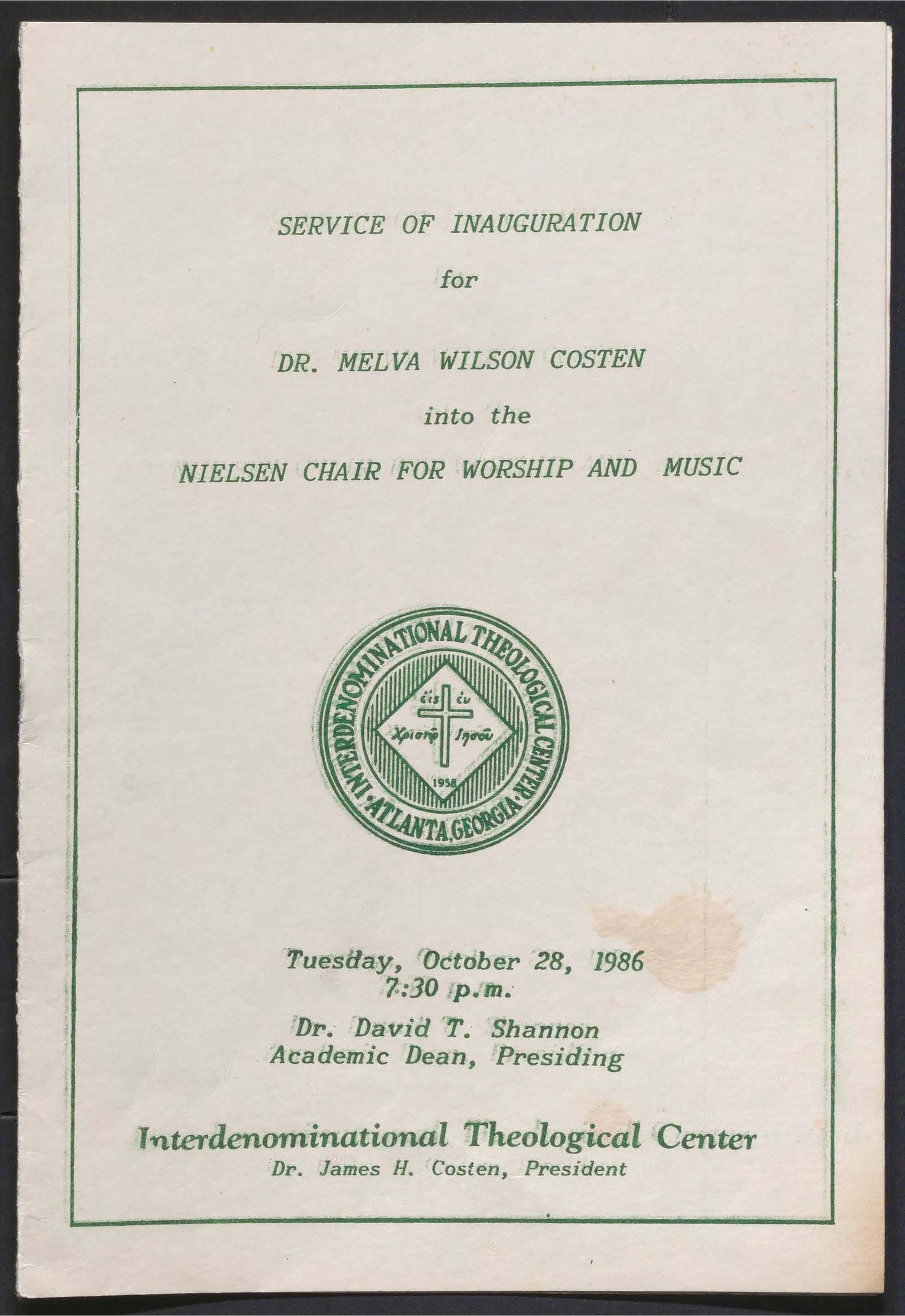 Front cover of the program for the inauguration service for Dr. Melva Wilson Costen into the Nielsen Chair for Worship and Music at the Interdenominational Theological Center, October 28, 1986. Pearl ID: islandora:300354 [RG 538, Box 1, Folder 7]

The collection includes two series. Series I, Melva Costen Papers, 1934-2019, contains files of articles, audiovisual materials, correspondence, photographs, printed items, publications, sheet music, subject files, writings, and other records chiefly documenting Melva's career in higher, music, and liturgical education at ITC, her academic and publishing pursuits, and her activities in the Presbyterian Church. Files of writings include addresses, essays, lectures, sermons, and speeches, and there is an unbound copy of "African American Christian Worship." There are also letters of condolence and obituaries for Melva's husband, Jim, a file of biographical materials documenting Melva's life, and a file of genealogy materials mainly pertaining to the Ellis and Wilson families.

Series II, James H. Costen Papers, circa 1949-2009, contains files of audiovisual materials, correspondence, photographs, printed items, publications, subject files, writings, and other records chiefly documenting Jim's role as moderator of the 194th and 195th general assemblies of the UPCUSA, his career at Johnson C. Smith Theological Seminary and ITC, and his work with the PCEA.

Click here to access the guide to the James and Melva Costen Papers and read more about the contents of each series.