With a Voice of Singing: the 1990 Presbyterian Hymnal 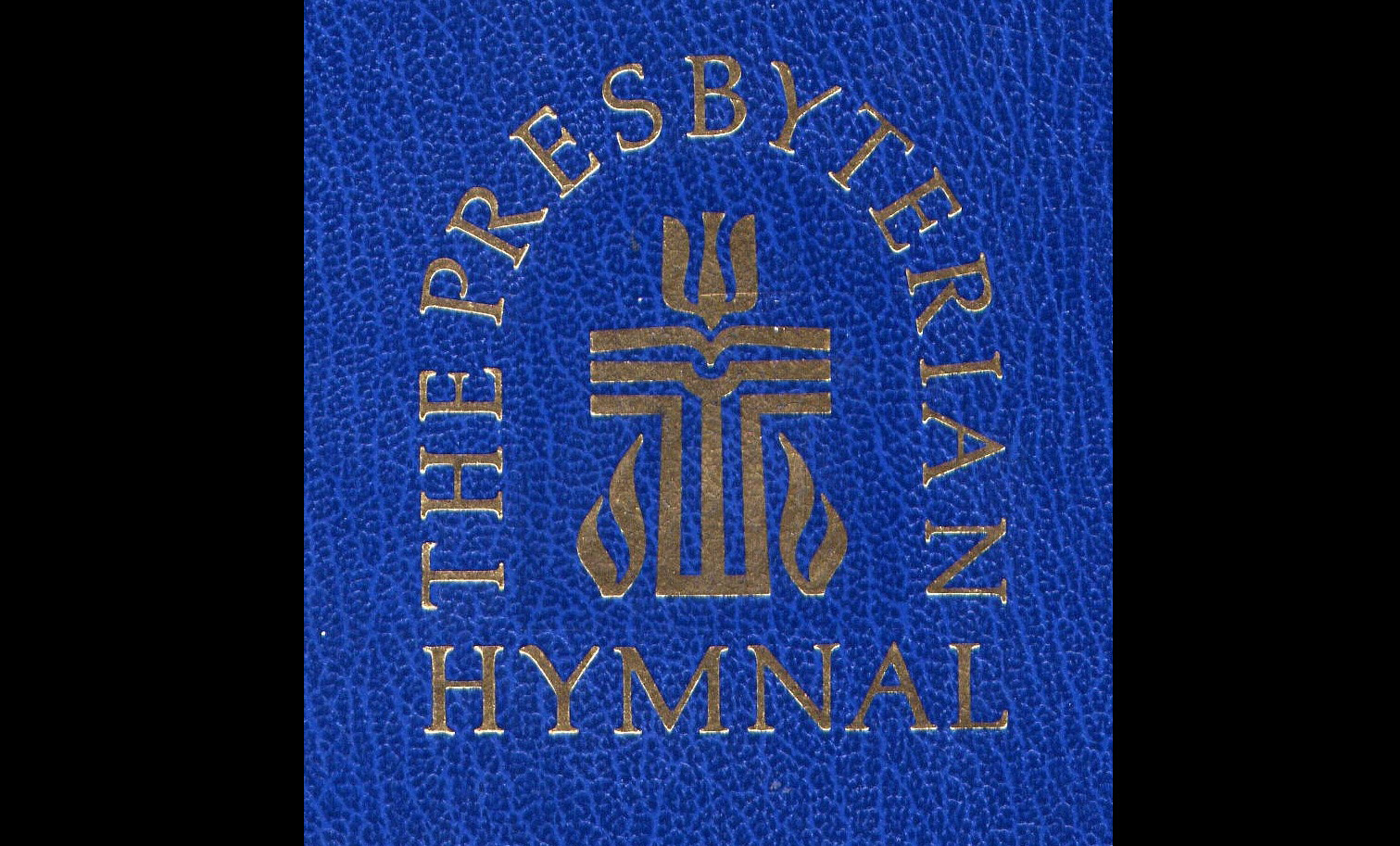 Presbyterian Hymnal, 1990.
--by Douglas McVarish
Look through the hymnal that your congregation uses and note the large number of hymns that have never—or rarely ever—been sung during a Sunday morning service of worship…. Some hymns stand the test of time: some do not. Why should the unused ones take up space when more challenging and vital hymns are available?... Again and again Scripture urges us: “Sing to the Lord a new song!” And there is such an abundance of new singable, vital, challenging, and comforting hymnody in our generation. We do well to make it available.
--“Why a New Hymnal?”[1] 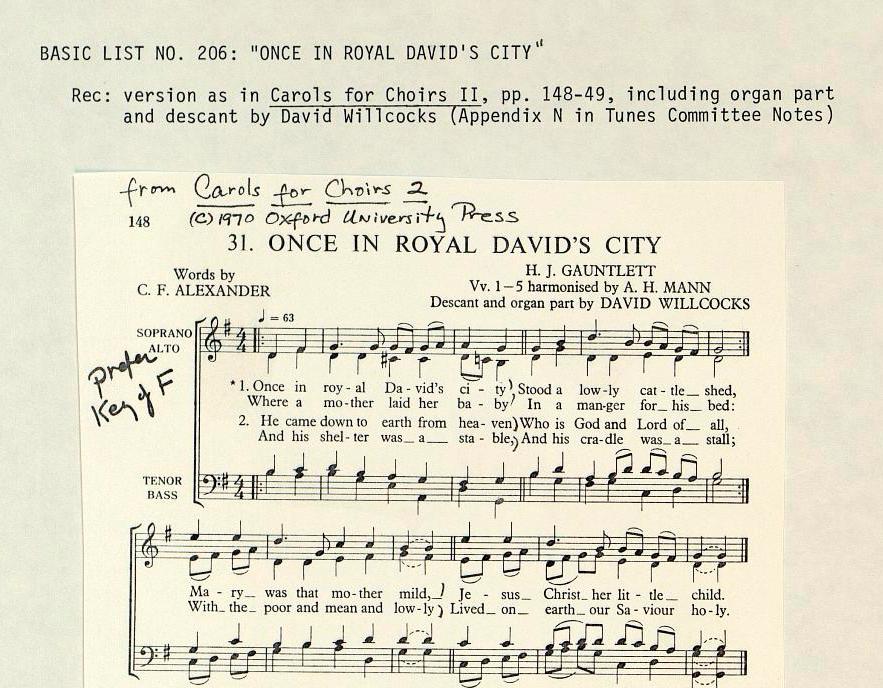 Hymnal with notes asking for change of key. Presbyterian Hymnal Committee records at PHS.
In February 1984, the Presbyterian Program Agency Board and the General Assembly Mission Board approved the establishment of a Hymnbook Committee, choosing professional musicians and hymnologists who reflected the breadth and diversity of the church. The committee was designated to consist of 18 persons, including four from the Presbyterian Association of Musicians (a group celebrating its 50th anniversary this year), four from “ethnic communities,” and no more than nine clergy (half of whom would be women). An equal number of men and women would be represented on the entire committee.[2]
The chairwoman of the committee was Melva W. Costen, a renowned scholar of African American church music and worship. Currently the Helmar Emil Nielsen Professor Emeritus of Worship and Music at the Interdenominational Theological Center in Atlanta, Costen has also served as visiting Professor of Liturgical Studies at the Institute of Sacred Music at Yale University. She is the author of In Spirit and in Truth: Music in African American Worship, A Workshop Manual on Worship and Black Christian Worship.[3]
A memorandum from the records of the committee noted some of the difficult choices its members[4] faced in evaluating hymns to be included:
Part of the effort included an attempt to increase congregational adoption of the denominational collection. A 1986 survey of pastors indicated that 7 percent of congregations used the 1933 Hymnal, 57 percent the 1955 Hymnbook, 13 percent the 1965 Worshipbook, and 20 percent other hymnals. 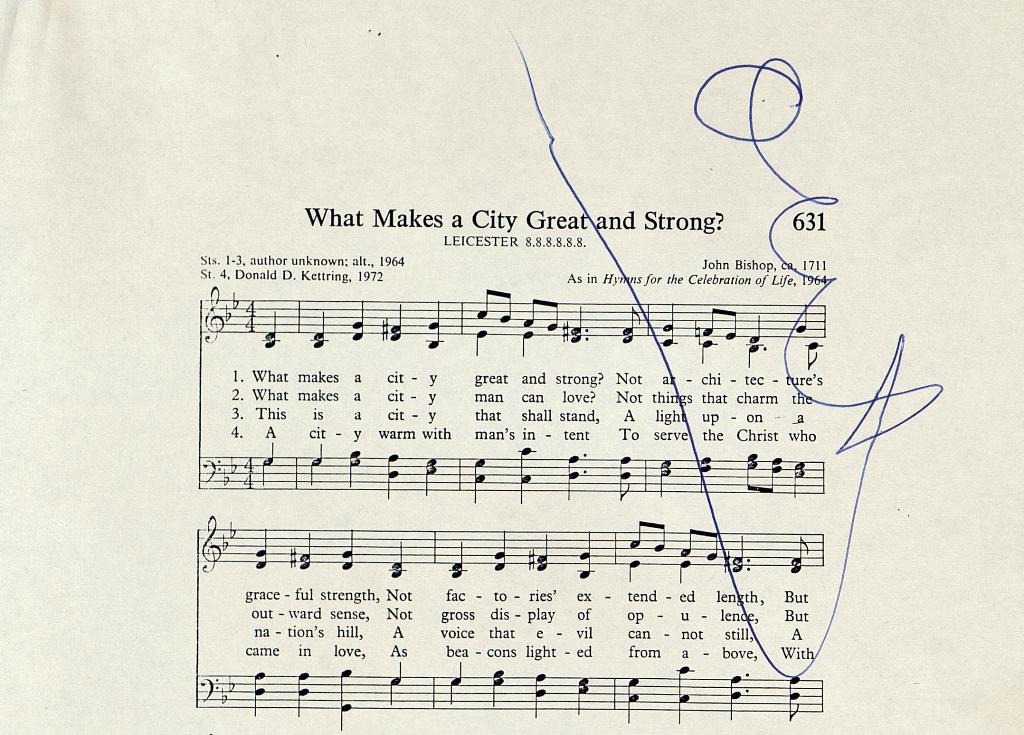 Hymnal nominated for removal: "out." Presbyterian Hymnal Committee records.
While the 1972 Hymnal was intended as a revision of the 1933 version (keeping many of the same hymns and updating some with contemporary language), the 1990 Hymnbook had the goal of introducing church congregations to contemporary hymnody. The hymnal committee decided that half of the 600 hymns would be “new” while the remainder would be hymns that had previously been published in Presbyterian hymnbooks.
The new hymns were not only twentieth century compositions but represented all periods of hymnody. Hymns came to the committee from surveys of recently published hymnbooks, as well as from outside submissions and recommendations.[6]
The Text Subcommittee issued language guidelines which influenced hymn selection. Among the guidelines were the following:
--We will retain Father language for God without question only in the creedal or Trinitarian formulas; otherwise, we will consider change in order to include other biblical images of God.
--We will endeavor to eliminate masculine imagery and third person singular pronouns (he, him, his) for God.
--Alternation or omission will be considered to avoid: “dark” or “black” as denoting evil or “white” as denoting goodness or virtue, pejorative use of such words as “heathen” or “pagan” or “lost,” self-righteous militarism, triumphalism, or mission activity.[7]
Application of the subcommittee’s guidelines led to the omission of a significant number of well-known hymns included in previous hymnals. Among these were "Onward Christian Soldiers"; "Faith of Our Fathers"; "Battle Hymn of the Republic"; "We are One in the Spirit"; "Nearer My God to Thee"; "God Rest Ye Merry Gentlemen"; "God of Our Fathers"; "He Leadeth Me"; "Once for Every Man and Nation"; "All the Way My Savior Leads Me"; and "America the Beautiful." Of the omitted, ten were reinstated in the 2013 hymnal.[8]

Hymn lyrics with example of recommended wording change at bottom. Presbyterian Hymnal Committee records.
During the selection process and after the final selection of hymns was announced, the committee received about 350 comment letters. Of these, 250 decried the omission of one or more favorite hymns:
At the close of the memorial service this morning, the organist played “Mine Eyes Have Seen the Glory of the Coming of the Lord.” It was a glorious note for the congregation as we left the church with Christian confidence in our hearts. And I began to think, we won’t have the hymn in our new Presbyterian hymnal. That’s too bad but we’ll go on playing and singing it.[9]
-- Ken Kettlewell, Pastor, Trinity United Church (Zanesville, Ohio)
When the hymn list was published, I checked it against the hymns that we sing regularly, using the 1955 hymnbook. Our congregation knows a lot of hymns, and we sing a lot. I have kept a record of every hymn sung in worship over a dozen years. Here’s what I found: 142 are in the new book; 11 are in the new book, but with a different tune than the one we use; 100 are not in the new book.[10]
-- Stephen A. Moss, Pastor, First Church, St. Albans, West Virginia
Commenting on the omission of "Onward Christian Soldiers" and "The Battle Hymn of the Republic":
This outrageous decision was made secretly by an 18-member committee. If democratic procedure had been followed, the two hymns would have surely been in the top ten…To sing such rousers was more than a negligible factor in climbing out of a warm bed on Sunday mornings to attend the First Presbyterian Church in Charleston, West Virginia.
-- Charles Peters, Editor-in-Chief, Washington Monthly
Dissatisfaction with the omission of well-known and loved hymns resulted in some church sessions deciding not to purchase the 1990 Hymnbook. One such decision was made by First Presbyterian Church of Haddon Heights, New Jersey, my congregation. Instead--as discussed in my previous post on revising Presbyterian hymnals--we purchased a nondenominational hymn book, The Worshipping Church. 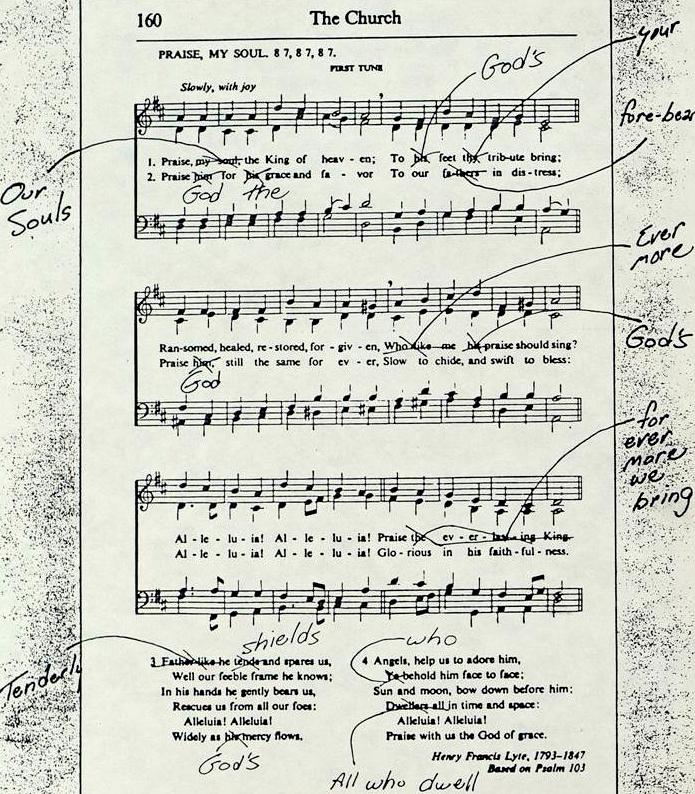 --Douglas McVarish is a PHS volunteer and member of First Presbyterian Church of Haddon Heights, New Jersey, a congregation in West Jersey Presbytery. Read his first post on Presbyterian hymns, about the 1970 Worshipbook, here.

[1] An undated information sheet in the Presbyterian Hymnal Committee’s files at PHS.
[2] Presbyterian Hymnal Committee Report, March 15, 1989.
[3] The Melva W. Costen Institute, Johnson C. Smith Theological Seminary.
[4] Other committee members were Robert Stigal, Director of Music of Myers Park Presbyterian Church in Charlotte, NC, and organist at Queens College; Jackie Chambless, a Montgomery, AL, organist; Rev. Lesley A. Davies, a minister at Westminster Presbyterian Church in Wilmington, DE; Rev. Charles R. Ehrhardt, pastor of First Presbyterian Church of Phoenix, AZ; Jane Parker Huber, a hymn writer; May Murakami Nakagawa of the Presbyterian Association of Musicians; David C. Partington, a choral director; Joy F. Patterson, a hymn writer; Sofia Porter, a Native American organist and choir director of the First Presbyterian Church of Sitka, AK; John Rodland, the Minister of Music and organist at several northern New Jersey churches; and Rev. Sharon K. Youngs, a Tennessee pastor. In addition, Dr. James K. Sydnor, a professor of church music at the University of Richmond, served as a consultant to the committee. (Information about Sydnor: “Rev. Farmer Will Attend School,” Kingsport News, July 2, 1966.)
[5] Presbyterian Hymnal Committee, Report to the Theology and Worship Unit, March 15, 1989.
[6] George W. Cornell, “Compiling hymns, lyrics volatile business,” January 6, 1990.
[7] “Language Guidelines for the Text Sub-Committee: Committee for a New Hymnbook,” September 1986.
[8] A full list of omissions was compiled from Royce E. Malm to Harold M. Daniels (PCUSA), January 26, 1990, as well as from a document in the committee files, “List of Hymns Requested in Response to Newspaper Articles.” Other omissions include: "Be Thou My Vision"; "God of the Prophet"; "How Firm a Foundation"; "I am Thine Lord"; "All Glory, Laud and Honor, God"; "Be Still, My Soul"; "God the Omnipotent"; "Have Thine Own Way, Lord"; "I Need Thee Every Hour"; "I Love to Tell the Story"; "In the Cross of Christ, I Glory": "I’ve Found a Friend"; "Jesus Calls Us"; "O God, Our Help in Ages Past"; "Rise Up, O Men of God"; "Stand Up, Stand Up for Jesus"; "Sweet Hour Of Prayer"; "Take Time to be Holy"; "Tell Me the Old, Old Story"; "Rock of Ages"; and "We’ve a Story to Tell the Nations."
[9] Ken Kettlewell, “A Glorious Note,” Presbyterian Outlook, October 10, 1989.
[10] Stephen A. Moss, “Let’s Make it Even Better,” Monday Morning.
Print
Hymnals