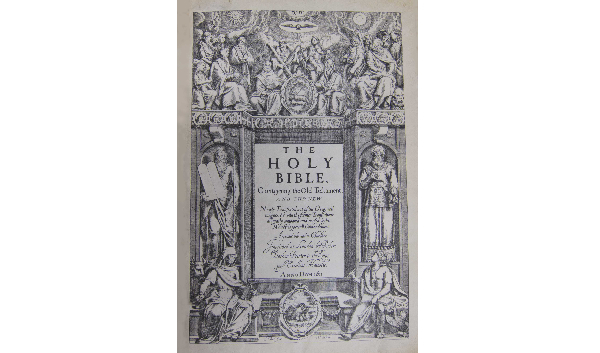 This year marks the 400th anniversary of the printing of the King James Bible, also known as the King James Version or the Authorized Version. Six teams of scholars labored to produce the translation from 1604 to 1611 under the auspices of King James I of England.

American scholar John Livingston Lowes called the translation the “noblest monument of English prose” for the tremendous influence it exerted on English literary style from the seventeenth century onward.

The Society holds two early folio editions of the 1611 King James Bible, also known as the “He” and “She” versions. Both were published in the same year, and are nearly identical except for a peculiar typographical difference in the final clause of chapter 3, verse 15 of Ruth.

The first edition contains the phrase “he went into the citie,” whereas the second reads “she went into the citie,” prompting scholars and rare book collectors to distinguish the two Bibles as “He” and “She.” A number of explanations have been offered to account for the variation, with a majority of scholars reasoning that the “he” in the “He” Bible refers to Ruth, and thus constitutes a misprint that was silently corrected in the “She” version. Other scholars argue that the “he” refers to Boaz, and that the “He” version represents a literal and correct translation from the Hebrew.

Both the “He” and “She” Bibles were donated to the Presbyterian Historical Society by the Society’s former president Henry Christopher McCook (1837-1911), and are housed in the McCook Collection.