Christian Education for the Now Generation 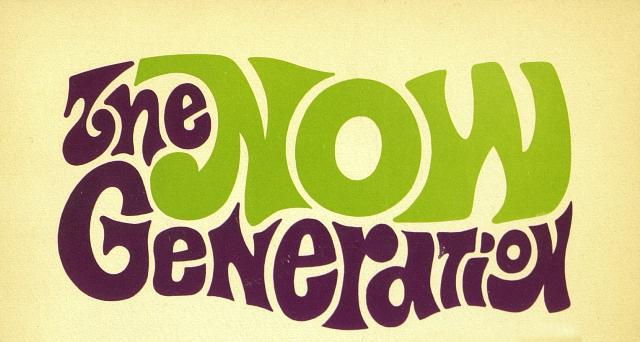 Cover art from Dennis C. Benson's 1969 book.
Banish anxiety from your mind, and put away pain from your body; for youth and the dawn of life are vanity. –Ecclesiastes 11:10

Ah but I was so much older then, I’m younger than that now. –Bob Dylan

American Presbyterians prepared for the youth movement of the late 1960s a decade in advance. Responding to the radical changes in American families and society at large following the Second World War – the growth of suburbs, the dominance of the automobile, the power of teen culture – the Presbyterian Church in the U.S.A. Board of Christian Education created a task force known as the Committee on the Christian Home to undertake a broad environmental scan of the American family, to compare the Christian education materials of the 1940s to the family of the 1950s, and to recommend revisions. The Committee made a preliminary report to the 171st General Assembly in 1959, and its findings were published in 1961 as Families in the Church: A Protestant Survey. From 1964 on, Families’ co-author Roy Fairchild followed this work with several editions of Christians in Families for the PCUS Covenant Life Curriculum.

Where prior studies of Christian education dealt with assigning Sunday school classes to professional church educators, as did Wesner Fallaw’s “prophetic” Church Education for Tomorrow (1960), or were dedicated to grouping and grading pupils, Fairchild centered Christian education and evangelization on the family unit. His 1964 Christians in Families: An inquiry into the nature and mission of the Christian home offers a frank rendition of the breakdown of Puritanical sexual mores, and treats sexuality – channeled toward the nuclear family – as a gift. Much of Fairchild’s witness to youth echoes his work of the prior decade: youth attend too many sock hops and wear nylons too early. He accurately identifies a craving among youth to take on political responsibilities – given “a frightening future of automation, rockets with thirty million horsepower thrust, shifting populations, and Kinsey reports” (224) – but locates that desire’s expression in civic clubs, volunteerism and “workreation,” essentially offering to teenagers a bowdlerized adult world.

More than adopting the design habits of the day, Christian education in the late 1960s fundamentally altered the terms of its appeal to youth. Educators and administrators strove for empathy. Whereas, from the 1940s until the early 1960s, the language of curricula attempted to pull adolescents into the behavioral modes of adults – promoting summer conferences on college campuses; explaining the PCUSA’s “youth budget plan” – the literature of the upper end of the 1960s attempted to address teenagers as peers.

By far the hippest proponent of youth-centered Christian education was Dennis C. Benson, director of Youth Ministry of the Council of Churches of the Pittsburgh Area. In his The Now Generation (1969), Benson identifies the barriers between adults and youth as a communication failure. Just as Christ spoke in the “accent and cadence of the common tongue,” so Benson writes a primer on the culture of the now – always italicized – generation for its parents, mainly by doing exegesis on Dylan and the Beatles.

He addresses teachers directly in the fully-multimedia Let it Run (1971), which included two colored vinyl flexi-discs, and was to be read like an LP: read to the middle, flip, and read again. Benson aims for “orgiastic creative teaching” involving multiple sound reels, overlapping slide projections, and call-and-response “rapping.” culminating in the run-on (25).

Trailing a waft of media theory and cybernetics, Benson’s Electric Liturgy (1972) follows him as he quits his job from mental overload – “The emotion circuitry of the electric age breaks apart when forced through channels which are too rigid” (88) – and prepares a youth liturgy for his church. Along the way, he re-evaluates his relationship to worship as performance and as community. By 1973’s Electric Love, the “free-lance media consultant” has found in the now generation’s electronic telecommunications a counterpart to the all-enveloping community of believers: “The patterns tend to merge into each other. It may seem hard to find the linear structures for re-grooving the nature of our lives in the wired environment […] We are wired to it and part of its energy.” (117)

Real work on the pavement was also published. In 1968, in an attempt to bring congregations’ resources to bear on the problems of unemployment, teen pregnancy, and alcoholism, the Rochester Area Council of Churches pooled its efforts into Project RISK, which undertook youth outreach in storefronts and coffeehouses, where adult RISK workers made themselves available for conversation. The road was rocky: most teen lounges reported fights and drinking. RISK’s 1969 report, published by the Geneva Press as A Design for Ecumenical Youth Ministry, made clear that the work of plain listening was difficult, and that the ultimate reward – bringing youth into the fold – was hazily glimpsed. It also reads as a rebuke to the age’s jive-talking media gurus: “[Youths’] exodus from the church will not be stemmed by an intellectual debate or by any book that presents our theology in ‘hip’ terms […] Ours is not to convert, ours is to communicate. A decision is the person’s, and if you will, the Spirit’s to make.” (27)