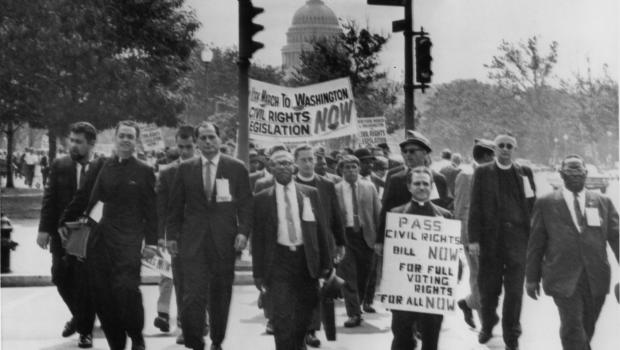 Fifty years ago, William Watkins, a Presbyterian minister serving a predominately African-American congregation on the south side of Chicago, was among 75 people arrested for participating in a civil rights prayer vigil in Albany, Georgia. Watkins was part of the Albany Movement, an effort to gain equal rights for African-Americans living in a small, southern town. Rev. Martin Luther King, Jr. sent a telegram urging clergy and others to “stand with the people of Albany as they strive for freedom.” King wrote: “Albany is not a local situation but a crisis in the national life of this democracy. When citizens are denied the right to pray and picket, when churches are burned for their use as voter registration centers, our nation suffers greatly.” Watkins’ experiences are documented in his papers at the Presbyterian Historical Society.

Presbyterians played an active role in the American Civil Rights movement. The stories of Watkins and many others are included in the Spring/Summer 2012 issue of The Journal of Presbyterian History. As we anticipate the fiftieth anniversary of the March on Washington in 2013, this special issue of the Journal features the reminiscences of six individuals who participated in that historic event. The “Our Documentary Heritage” section highlights the Presbytery of Washburn’s conflict with the Governor of Arkansas, Orval Faubus, over integration at Central High School; the PCUS’s conference on “The Church and Civil Rights,” held in Montreat, North Carolina, with Martin Luther King, Jr. as keynote speaker; and participants in civil rights protests and marches including the PCUS Synod of Virginia delegation at the 1968 Solidarity Day March. The special issue also features photographs documenting three ecumenical programs of the civil rights era: the Hattiesburg Ministers’ Project; the Delta Ministry; and the Child Development Group of Mississippi.

The current in-house exhibit at PHS, “Where History Lives: The Presbyterian Historical at 160,” also features letters, pamphlets, posters, and photographs documenting Presbyterian and ecumenical involvement in the Civil Rights Movement.

Finally, on June 1, PHS Board members Shirley Satterfield, Jim Reese, Bill Marshall, and Louis Weeks spoke about their participation in the Civil Rights Movement and their memories of those momentous times that changed our church, our country, and our world forever. Look for the video of this panel discussion on our YouTube channel.